Georgian Abano Pass leads from Kakheti to archaic mountain region of Tusheti in the Great Caucasus range. The unpaved gravel way is said to be one of the most dangerous roads in the world and is only passable in few months during summer. Mystic Tusheti has insurmountable 4,000m+ elevation borders to Chechenya, Ingushetia and Dagestan in the north. As Tusheti people are only connected to the rest of the world via Abano pass they have maintained archaic traditions and habits. The pass road starts in Kakheti village of Pshaveli. Pass summit is located after 40 kilometers and an altitude gain of some 2,500 meters. The way terminates after total 72km in Tusheti village of Omalo. 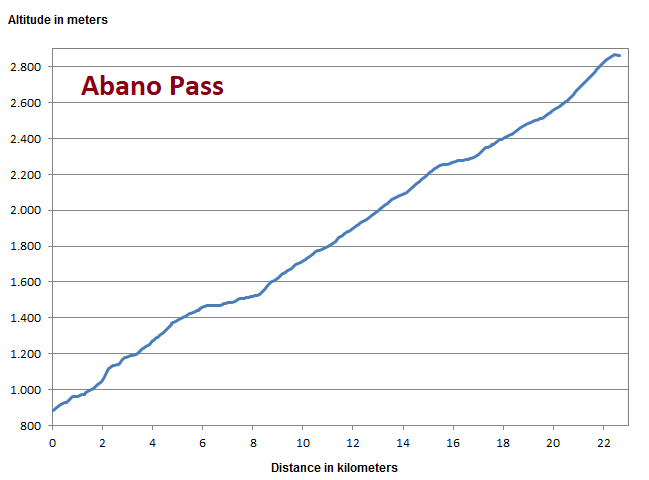 The profile shows the slope of the southern ascent on its final 23 kilometers overcoming an elevation gain of some 2,000 meters. On the final three kilometers the grade inclines to some steady 13%. 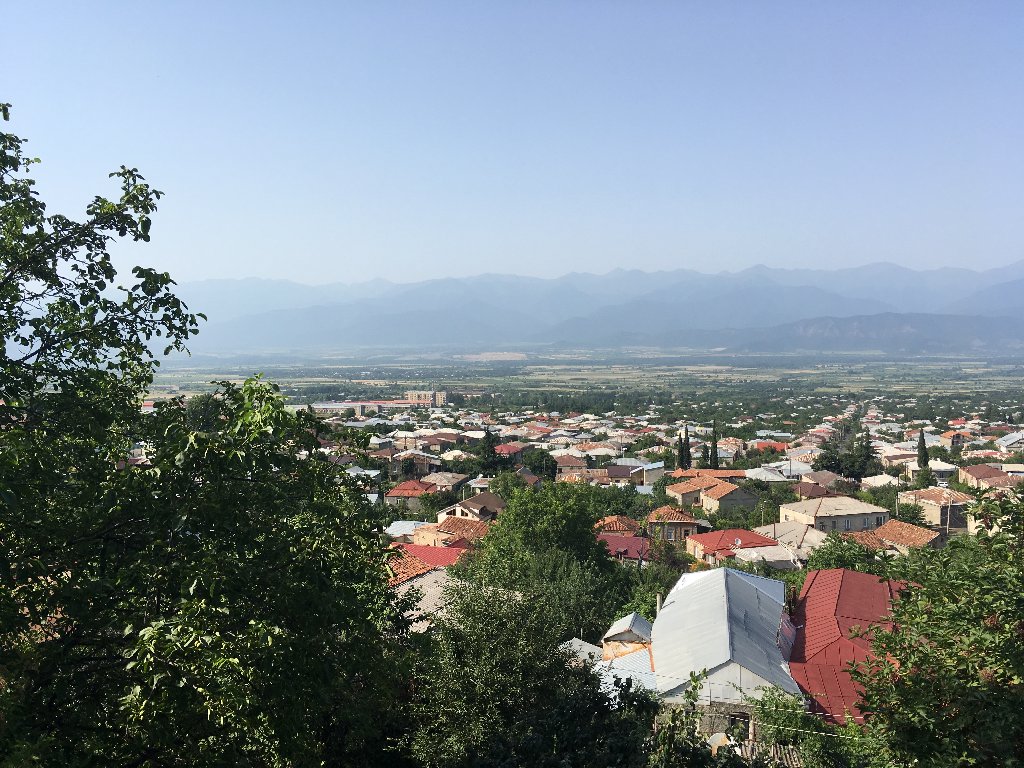 Departure at Kakheti village of Telavi in the very early morning with a support car. 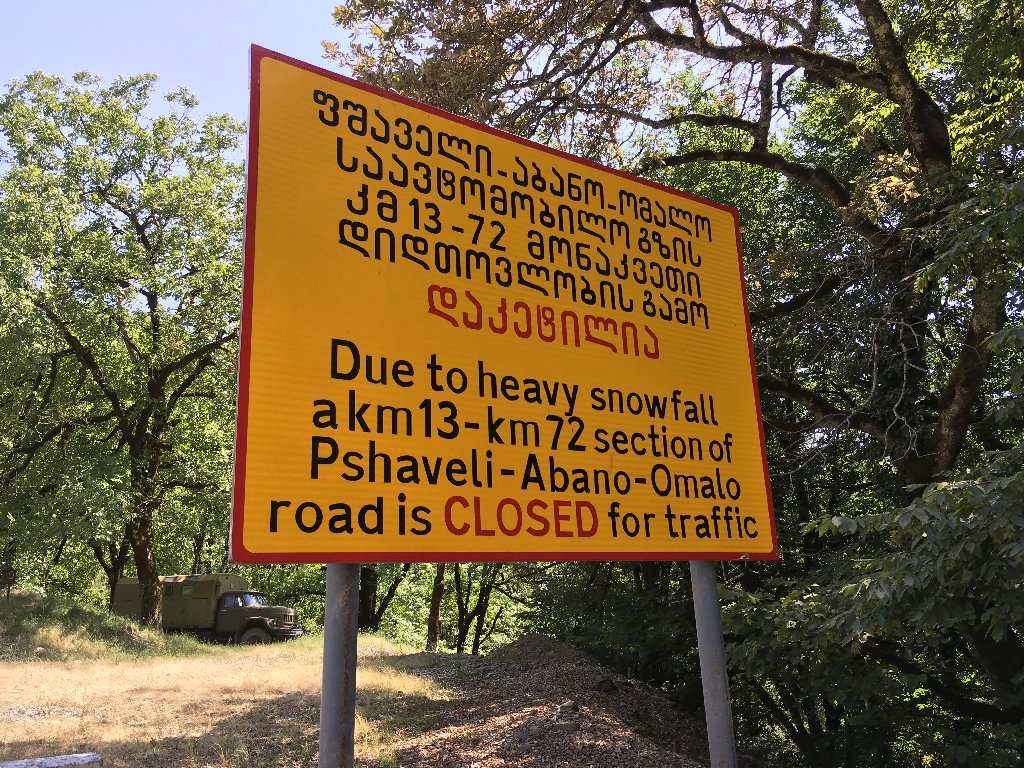 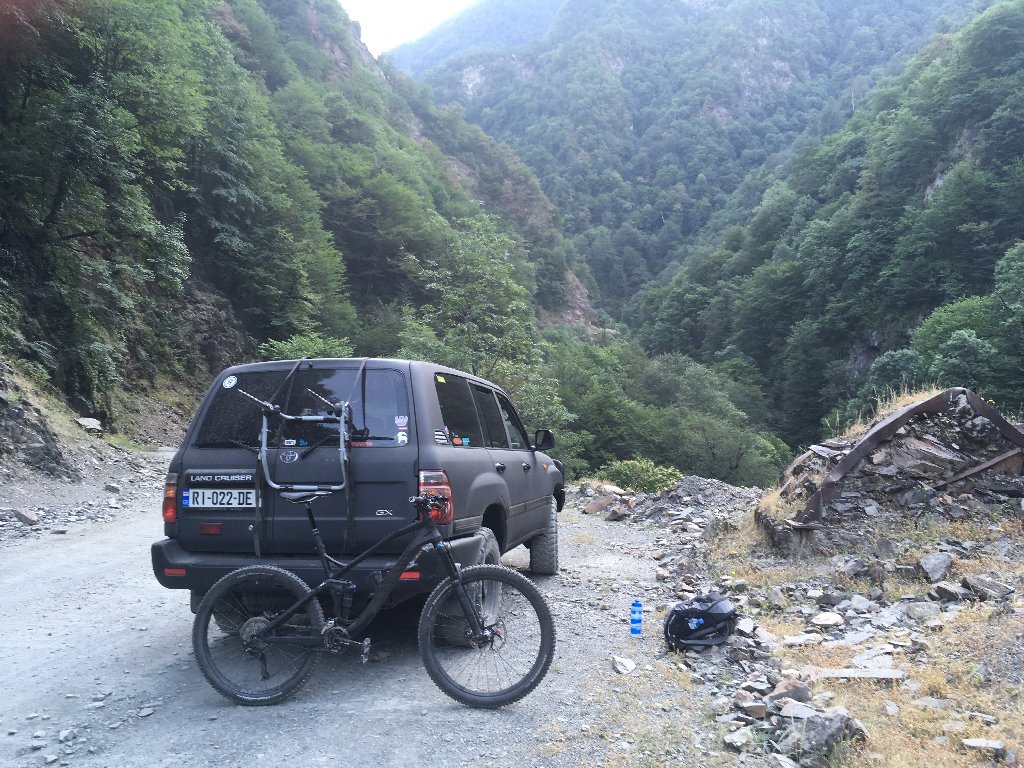 We overcome the initial 17 kilometers of the road by car as the way has only 400m of altitude gain so far. Due to many aggressive dogs alongside the road we only dare to leave the car behind the village of Lechuri and start our today's ride right at this spot. My driver guide stays with the car and the words:"If you won't be back in maximum eight hours, I will follow by car and look for you!" 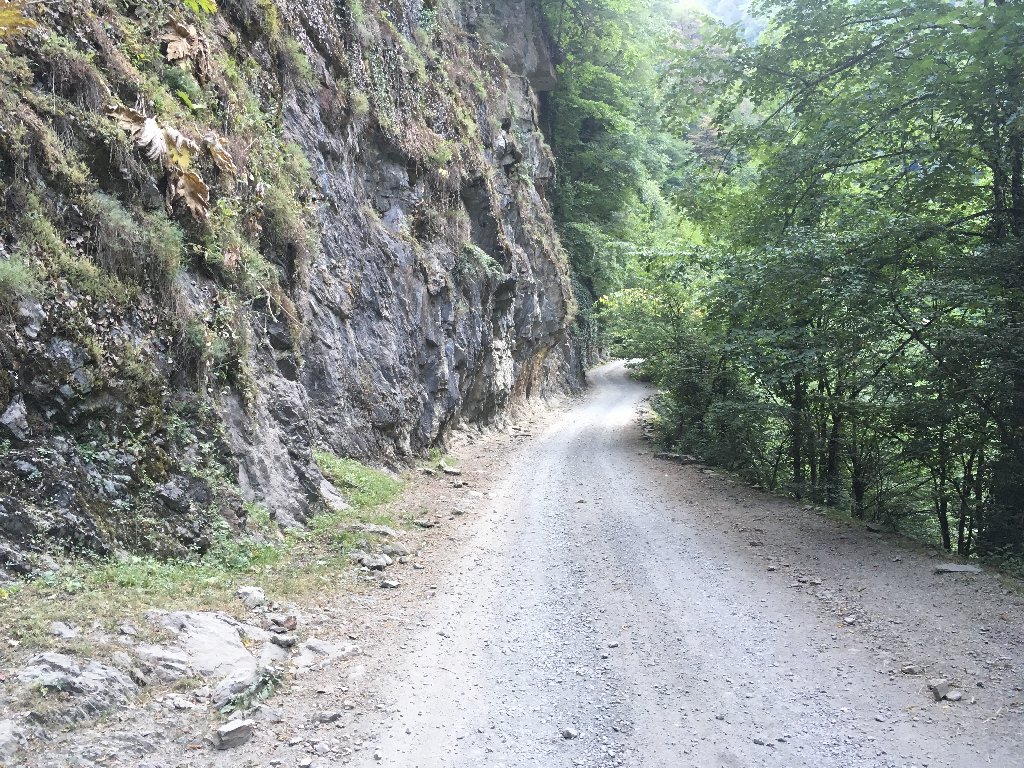 The unpaved way leads alongside small Stori river until an elevation of 1,500m. 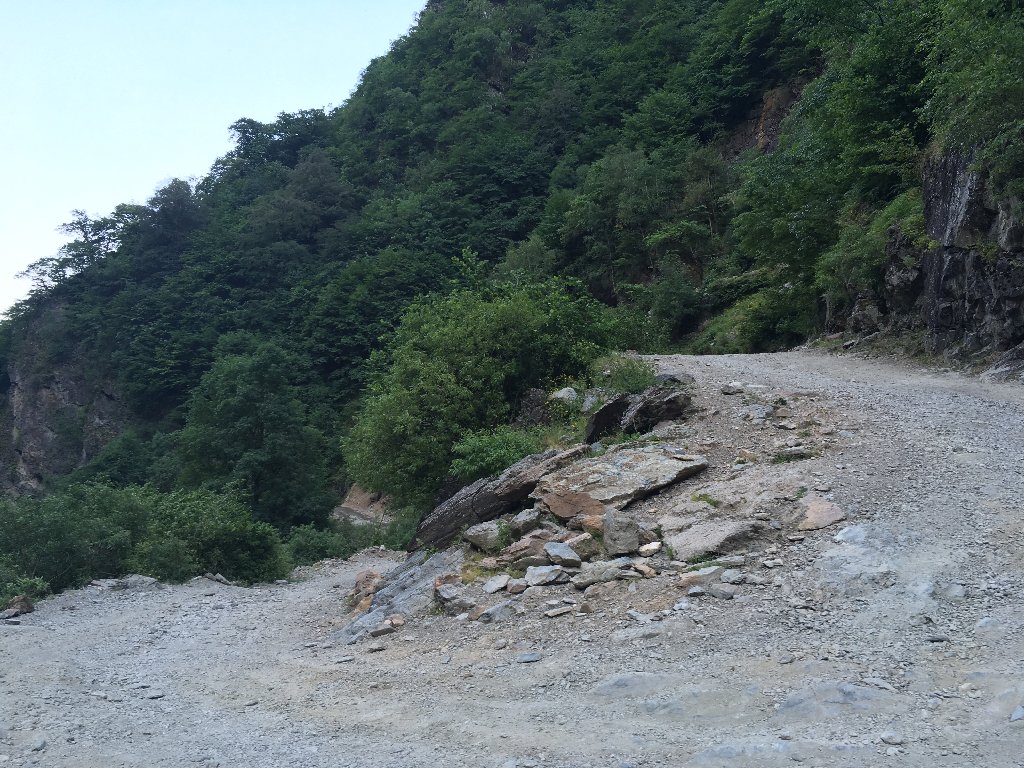 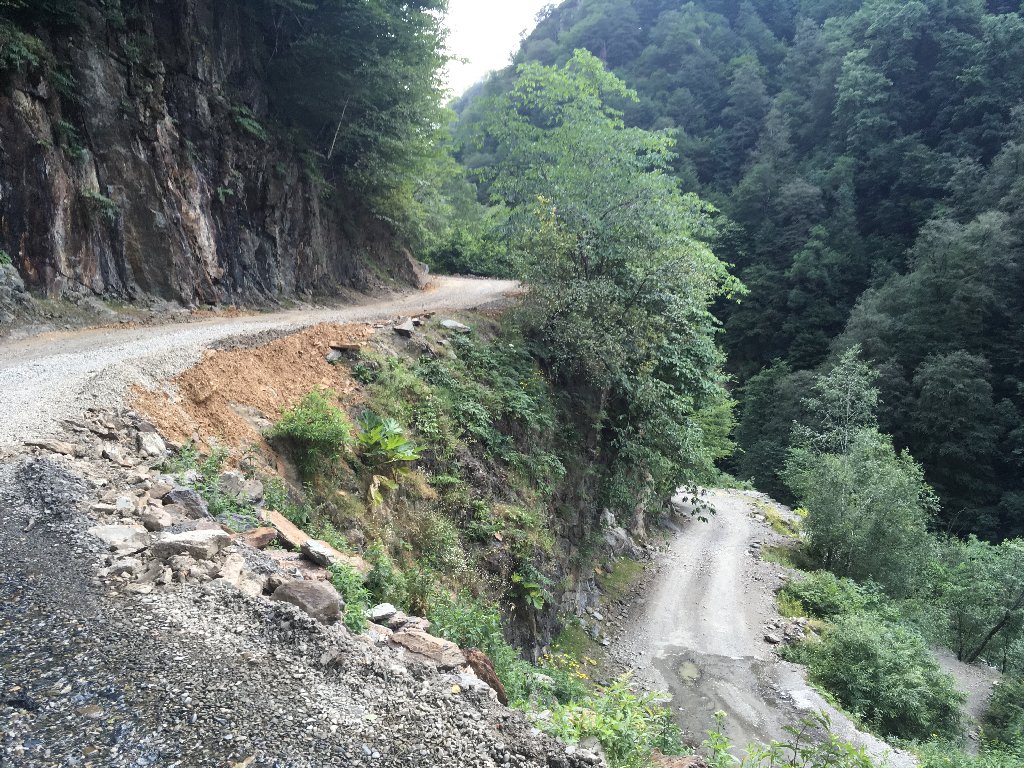 The lower part is forested and pleasantly shady. 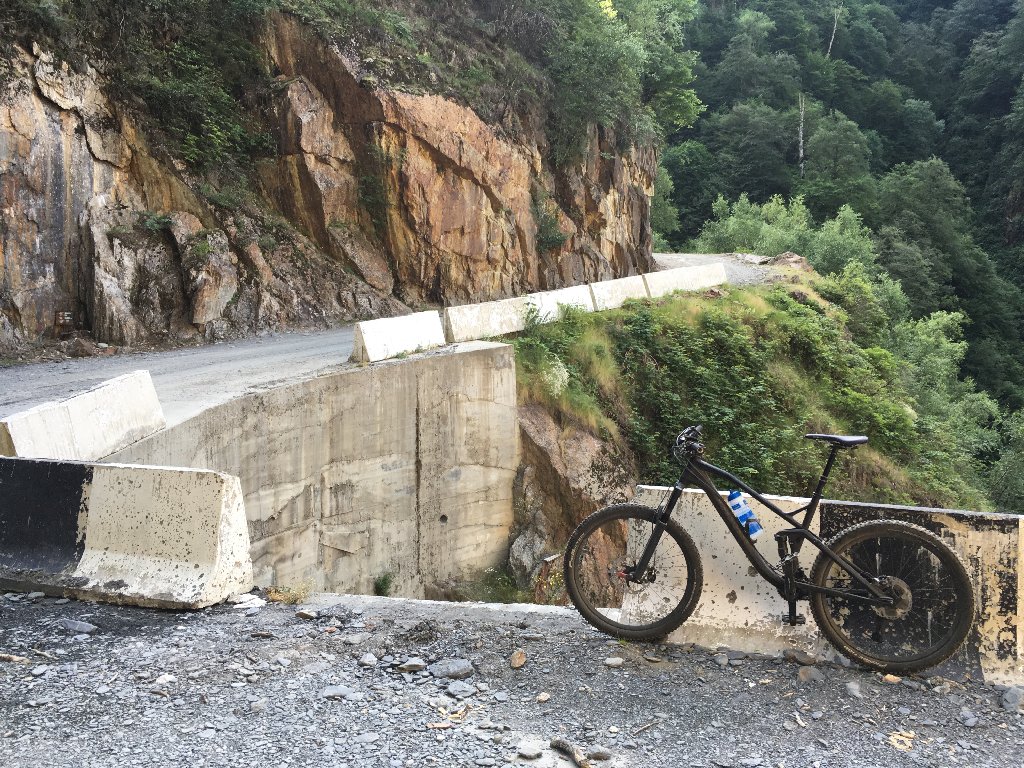 However, the road is only secured in few parts. 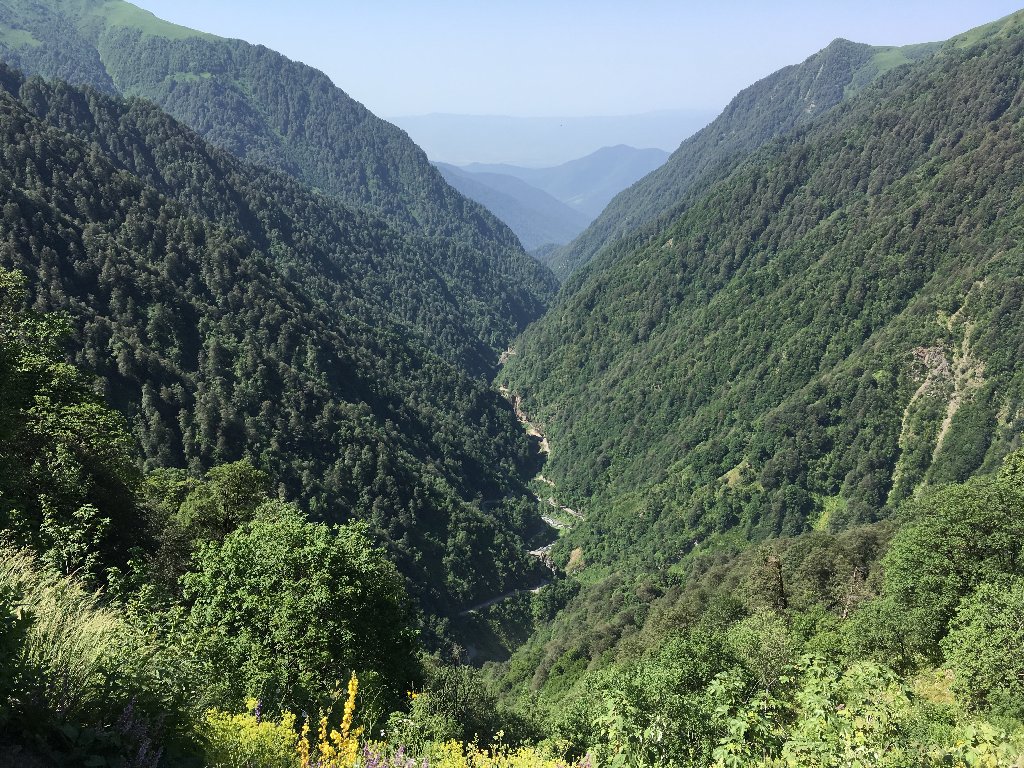 View down to the way in the valley

After the wooded passage the road winds up to pass summit in the very top back of the image. 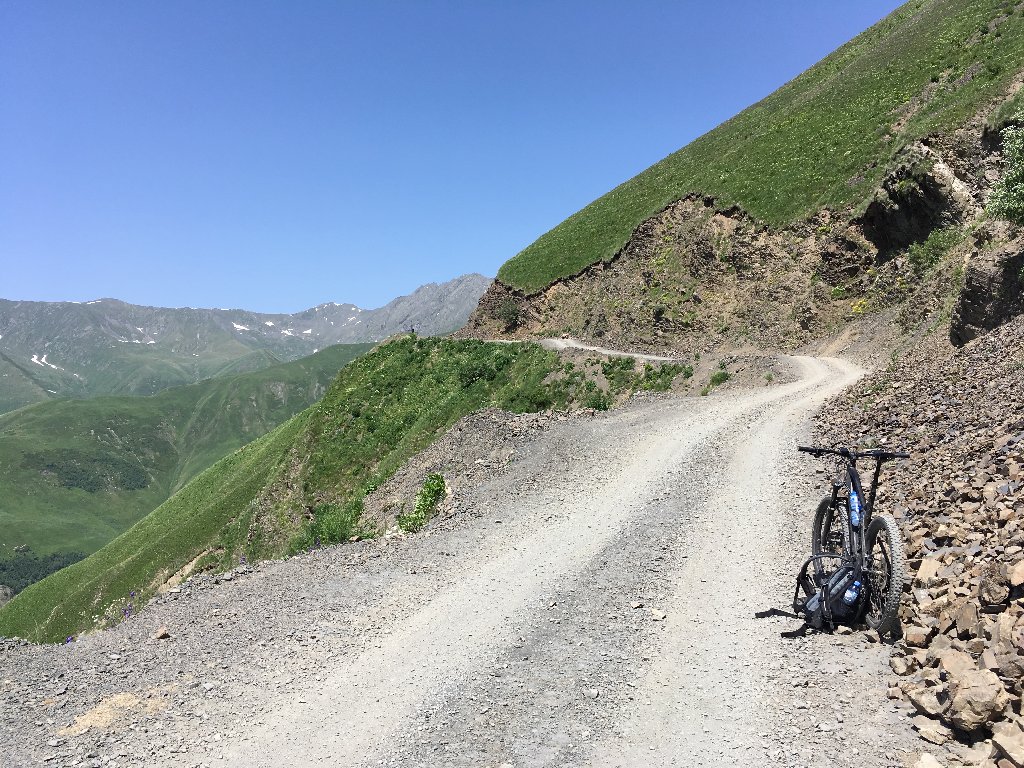 The unsecured track is very narrow and only passable for the width of a single car. In bad weather and respective severe road conditions it becomes very dangerous for oncoming traffic. However, on my bicycle the heat of the strong sunlight becomes the main problem today - no more shadow at all.

Local horse riders overcome the pass with their horses directing them only by strong and loud calls. 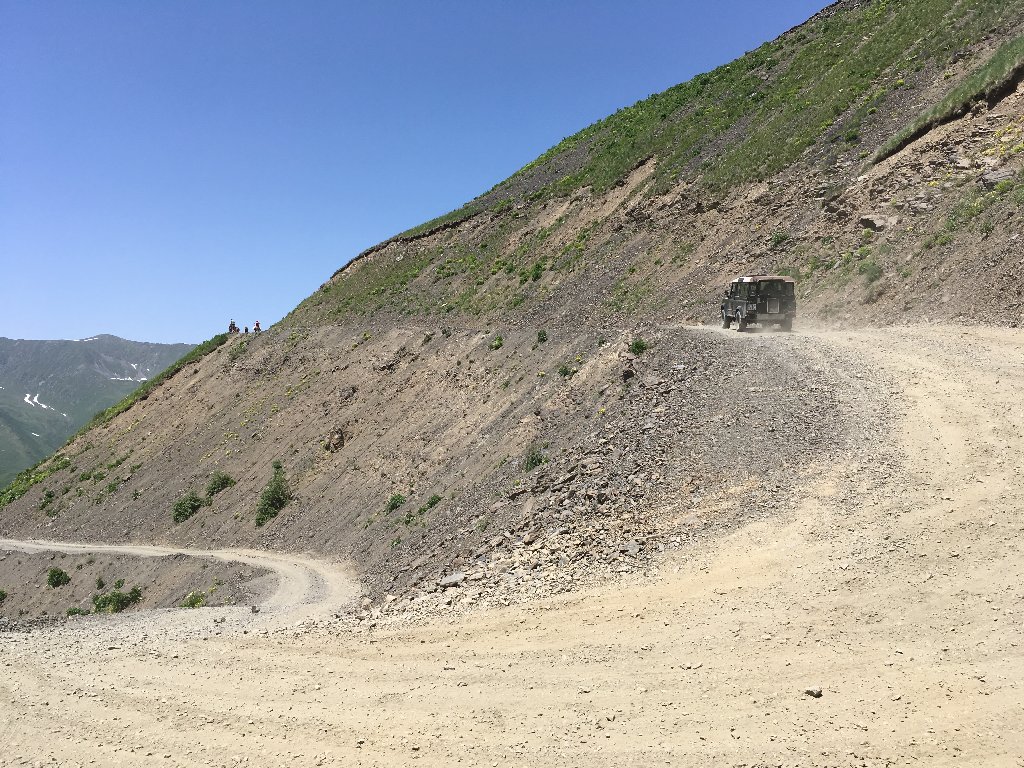 View back onto the long ascent above timberline 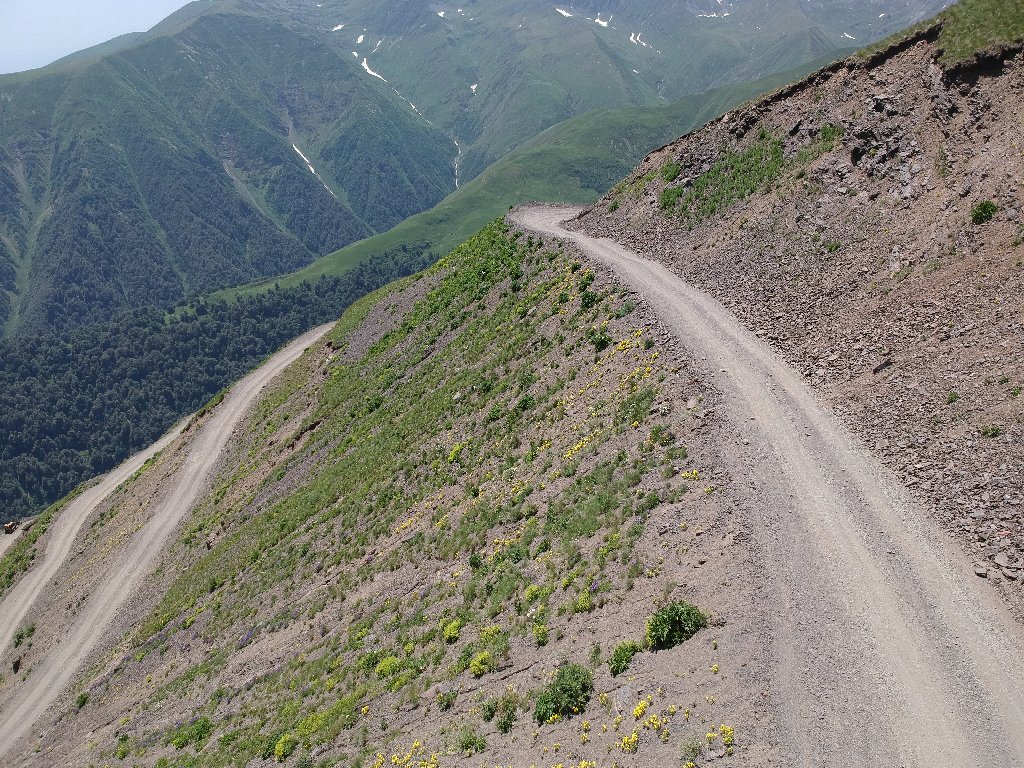 At an altitude of some 2,500m a final group of tight slopes 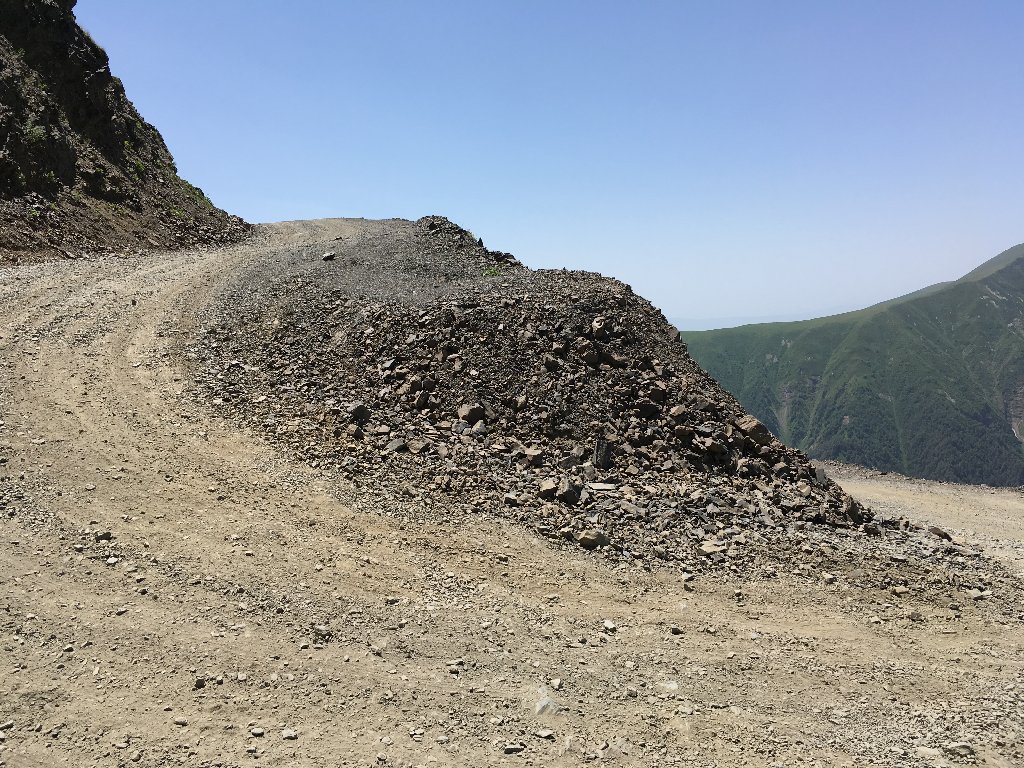 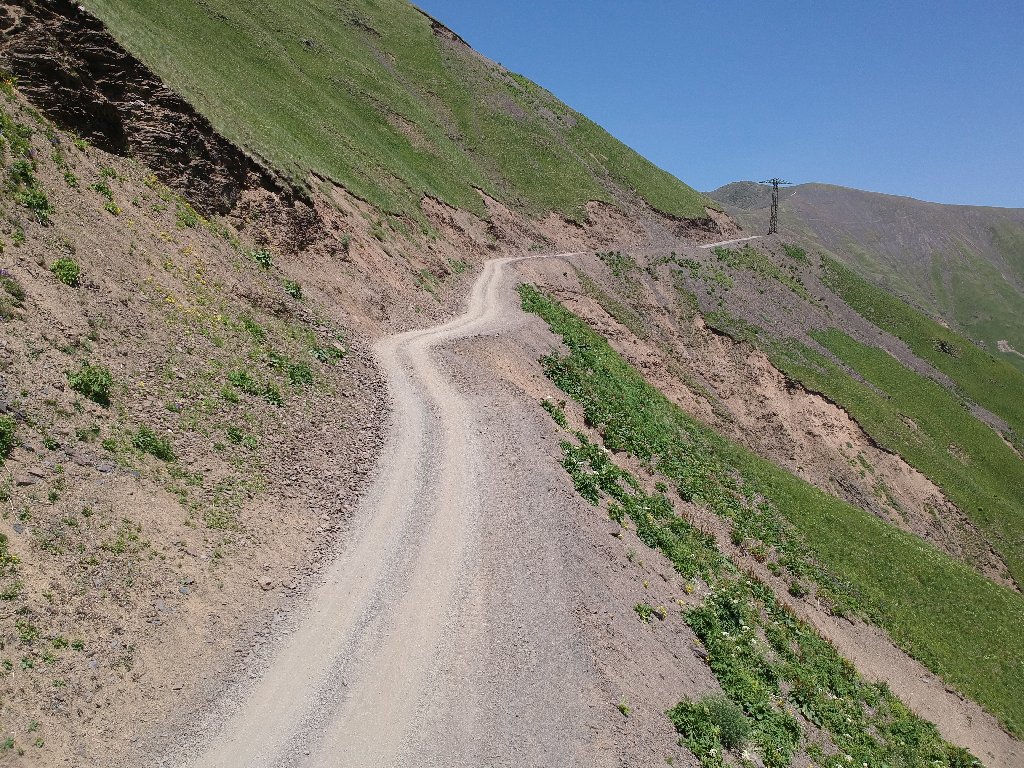 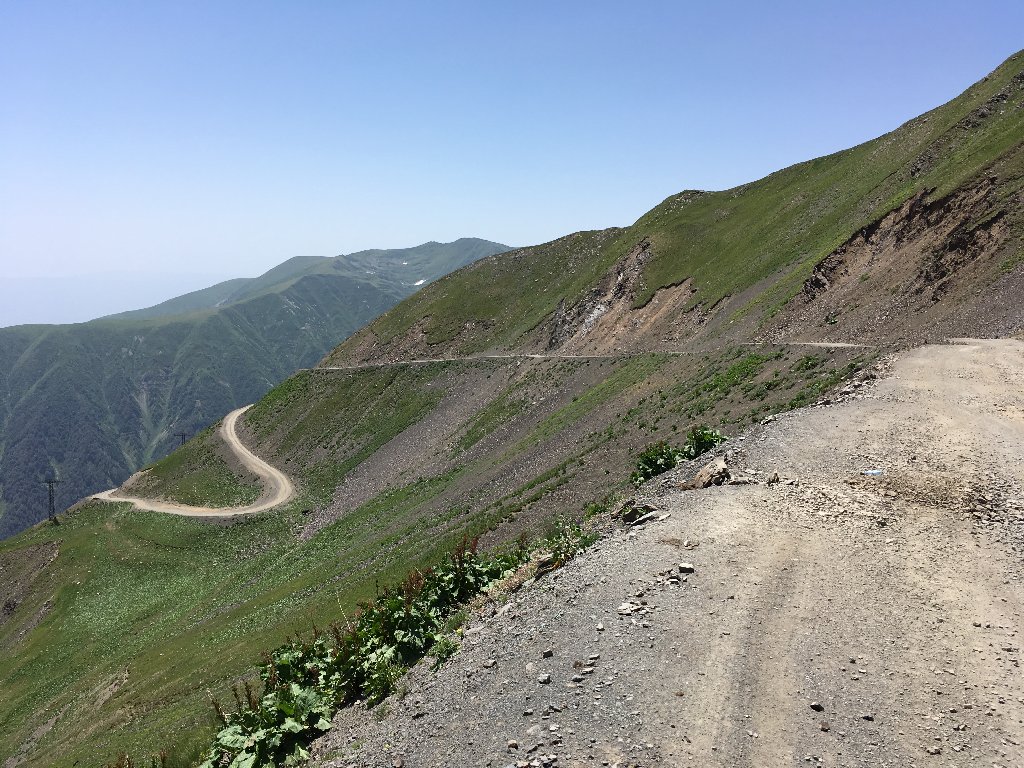 2,000 meters of altitude gain with an average 8% grade in strong heat on a dirt track - hard work!

After some five hours of painful riding pass summit is being reached. 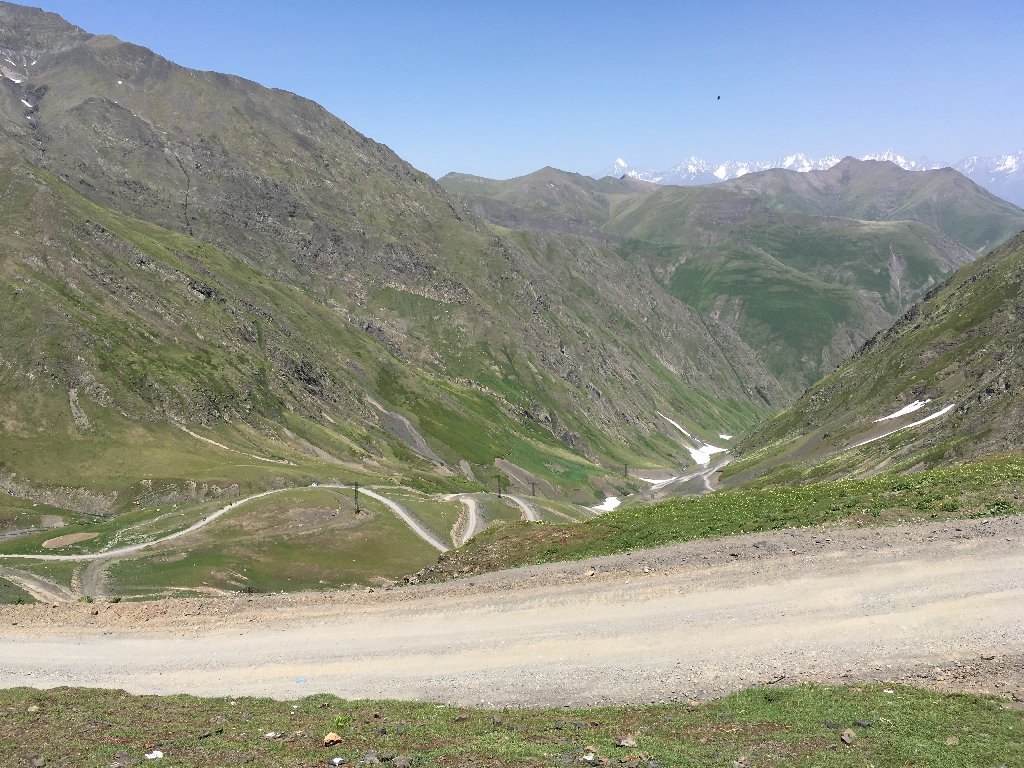 The image shows the descent way on the other side of the pass down to Tusheti area with the snow covered mountains of the Great Caucasus range in the very back. The range forms the border to Russia and its autonomous Caucasus republics of Chechenya and Ingushetia.