Infamous Yungas Death Road leads from Bolivian Altiplano down to lowlands of Yungas jungle. The unpaved and almost entirely unsecured runway prides itself "The most dangerous road in the world". The way was built by Paraguayan war-prisoners in the 1930s and has only a few meters of roadway width. Partly there is a sheer of a few hundreds meters directly next to the runway. Any lack of concentration may have fatal consequences. Pictures of that road have been circulating on the internet for many years now and show trucks and busses trying to drive in contrarious directions. Respective reports on that road provide superlatives regarding the amount of fatal accidents and death in the past decades. However, many vehicles vanishing in the precipise and many hundreds cases of death are given fact. Only for a few years now there is a new asphalted main road which has absorbed almost the total motorised traffic. The old road is actually no longer in use and does only serve as a very popular tourist attraction in La Paz area when courageous riders go down there on mountain bikes and finally adorn themselves with „Survivor“-shirts. Anyhow, even this thrill has caused many casualties in the past. Once being in Bolivia to ride Chacaltaya one should additionally drop over the Death Road. However, in contrast to the tourists seeking for a downhill thrill I will do the much more challenging reverse way: An uphill climb of 2,000 meters of altitude difference on "The most dangerous road in the world"! 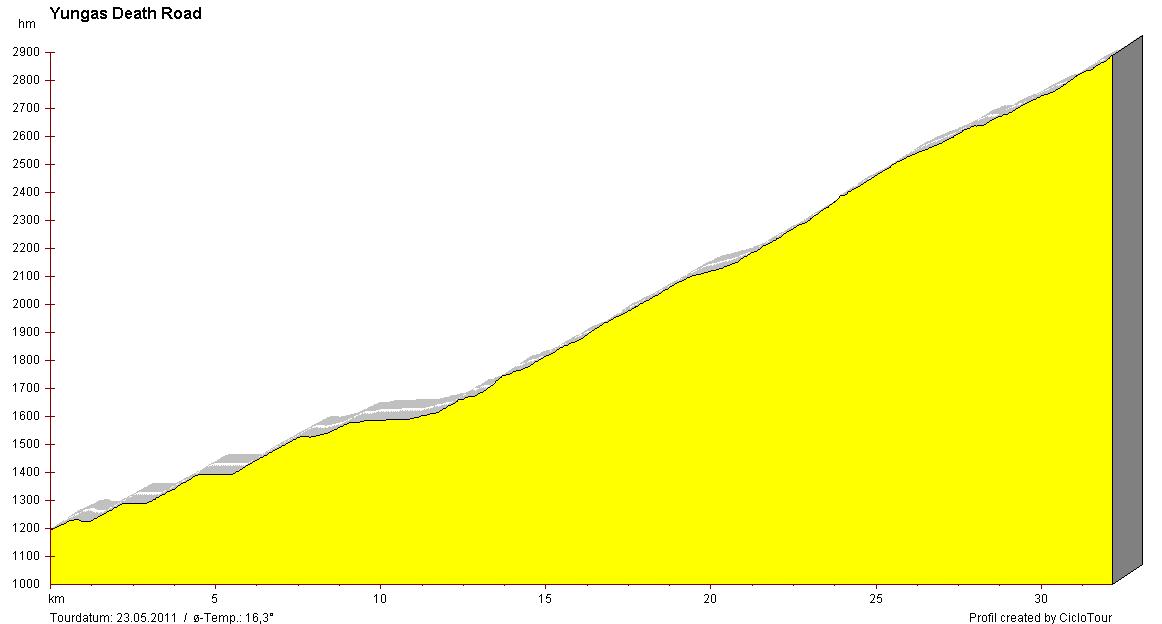 The first 15 kilometers up to an elevation of 1,800 meters have a moderate grade with even some flat passages. Afterwards the grade becomes continuously steeper and even exceeds 10%. 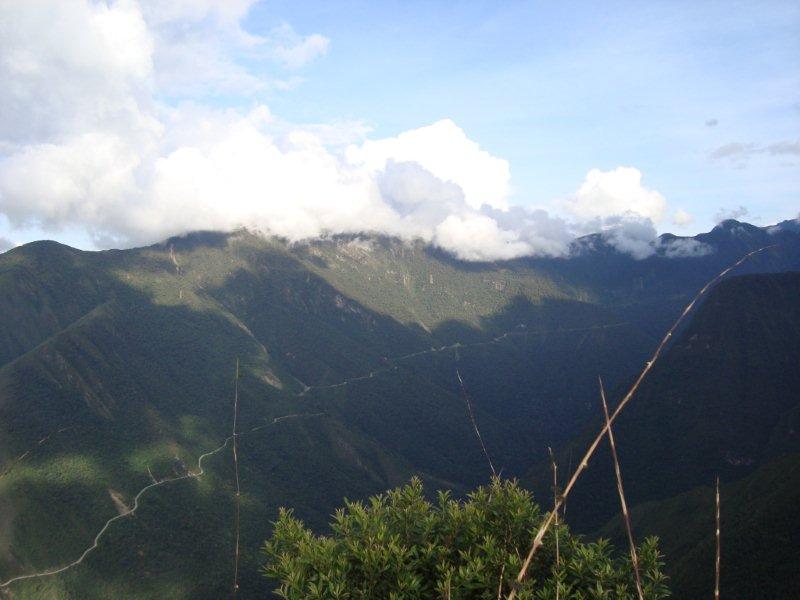 On the day before the ride after passing several police stops (anti-drug, road charge etc.) is this the view from the new asphalted main road down to opposite old graveled Death Road. 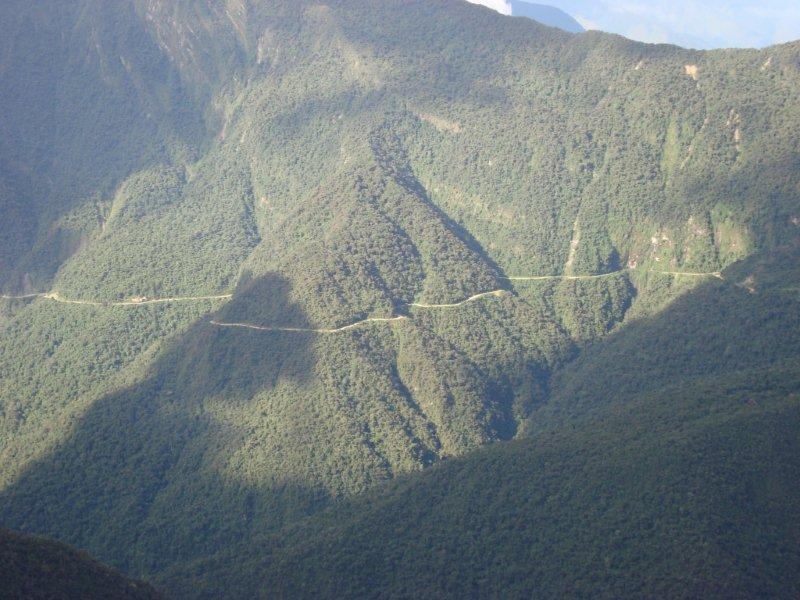 The runway is readily visible in the overgrown hillside. Not a bit of crash barriers... 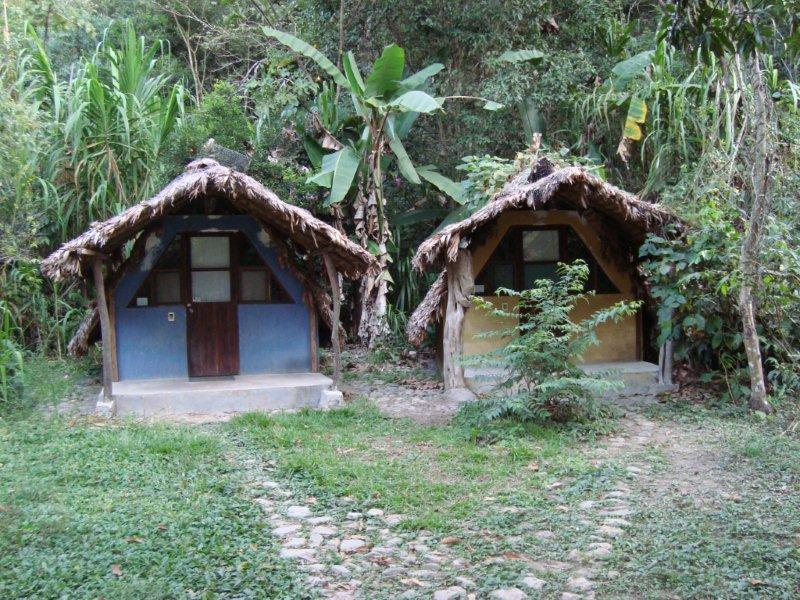 Overnight stay in these huts in the Yungas village of Yolosa at an altitude of some 1,200 meters. 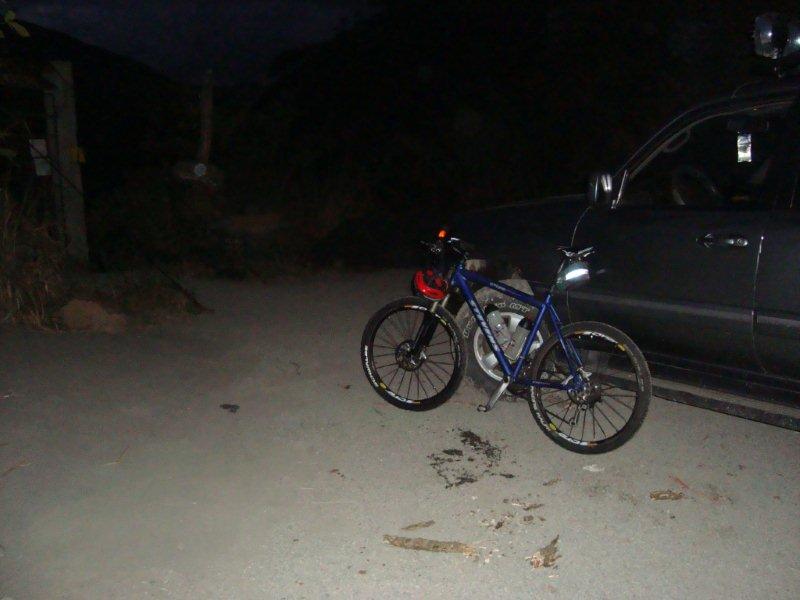 Departure on the next morning at 6.30am with some mixed feelings... 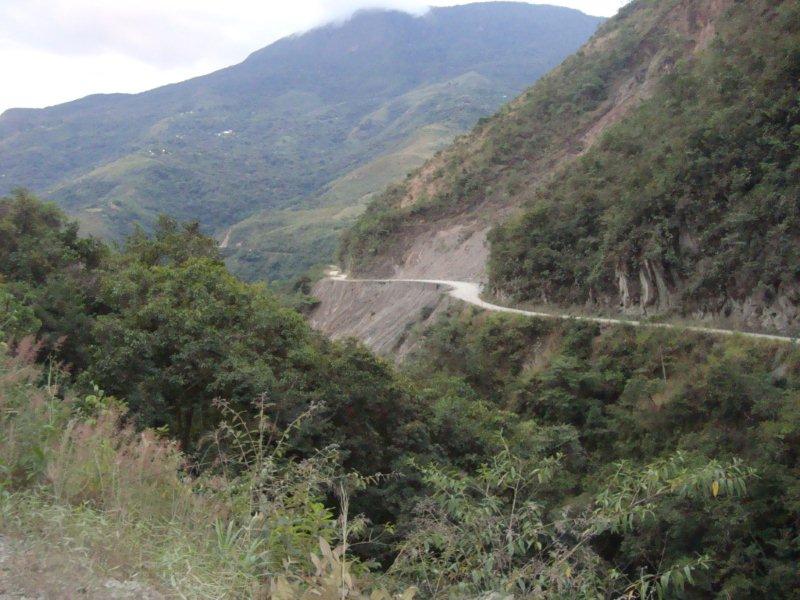 Just after sunrise is this the first impression of the road. The lower part is moderatly flat but shows that this ride will not become a promenade walk. 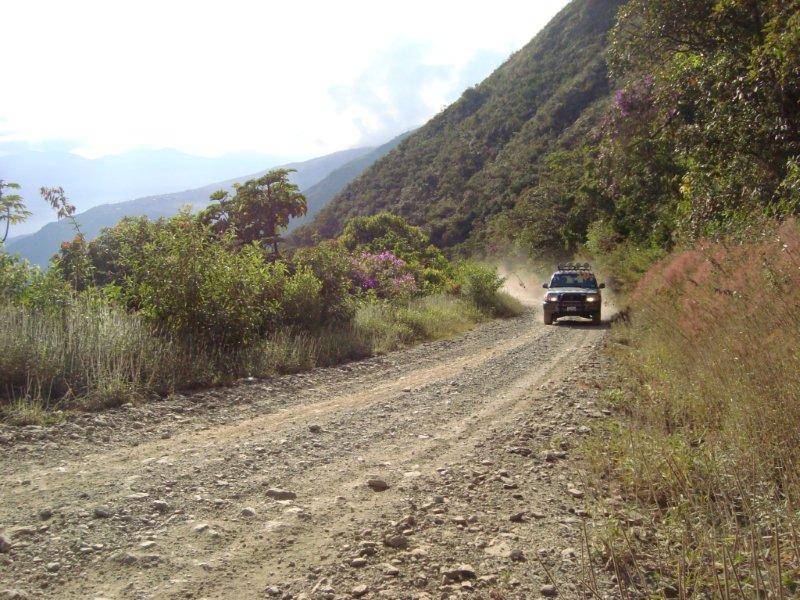 A local guide accompanies me in a 4WD vehicle. The guide has several years of detailed experience with the road and knows all lurid tales, every curve and all good photospots. However: It is his first uphill ride!

The Death Road is the only left-side traffic street in South America. Thus the vehicles driving down can better realise the brim which is then at the side of their steering wheel. Moreover, in the past several heavily laden trucks coming uphill down from the jungle slipped down the rain-sodden right side of the runway. Anyway, desire to see my family again, keeps me at the very, very left at the hillside of the road... 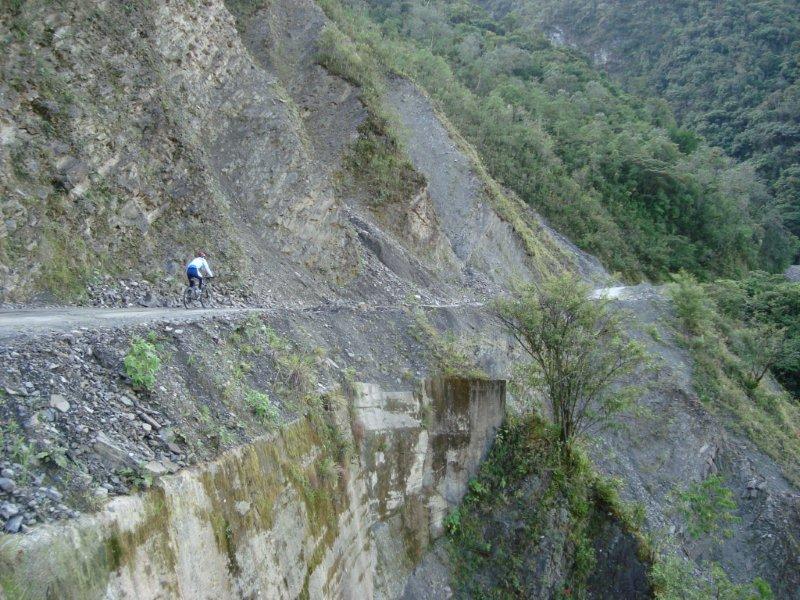 Keep always close to the wall and do not look to the right... The runway is acceptably rideable in the lower part but becomes afterwards partly quite rocky and steadily steeper. 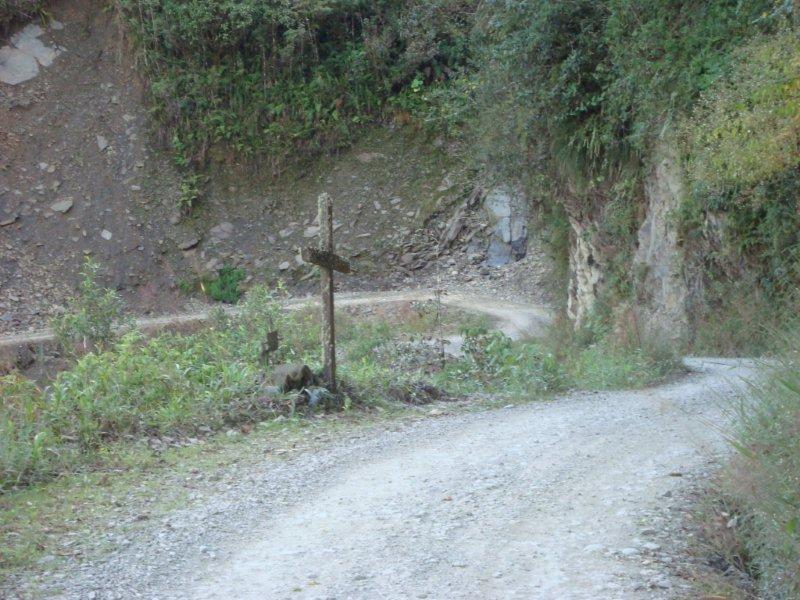 At an elevation of some 2,000 meters is the first cross. Several further crosses and memorial stones will follow alongside the road and remind you to stay concentrated and precautious. 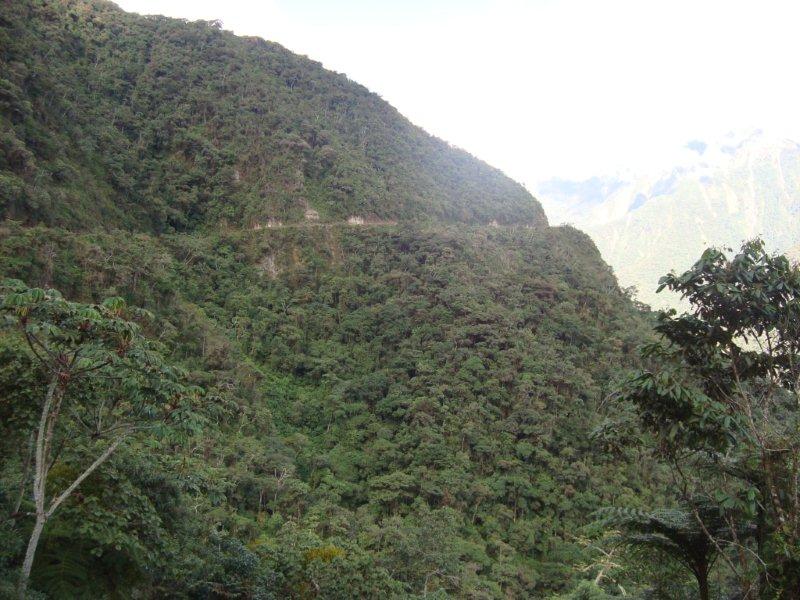 Most parts of the upcoming road are visible.

Water plashes down from an overhang forcing you to drive through a little waterfall. 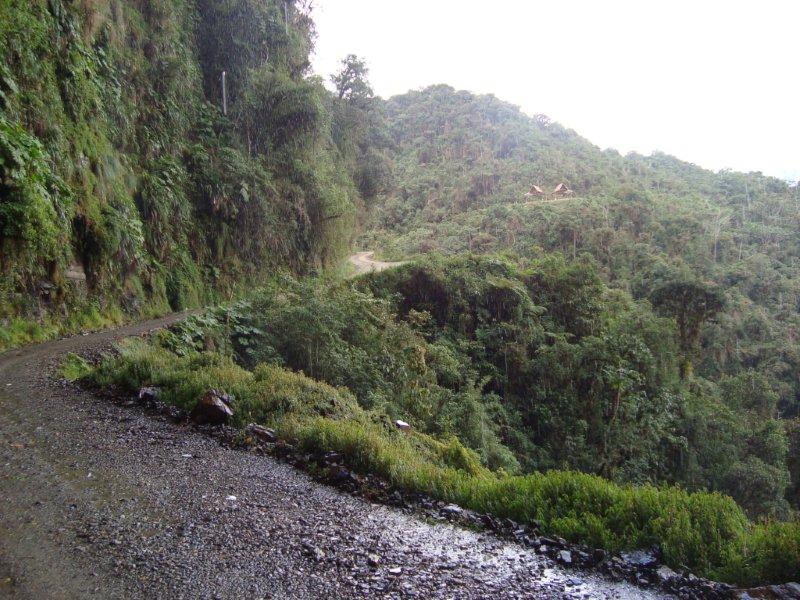 Roofed view points have been built alongside the road instead of investing in the safety of the runway. The myth of the Death Road is obviously cultivated by the responsible authorities. 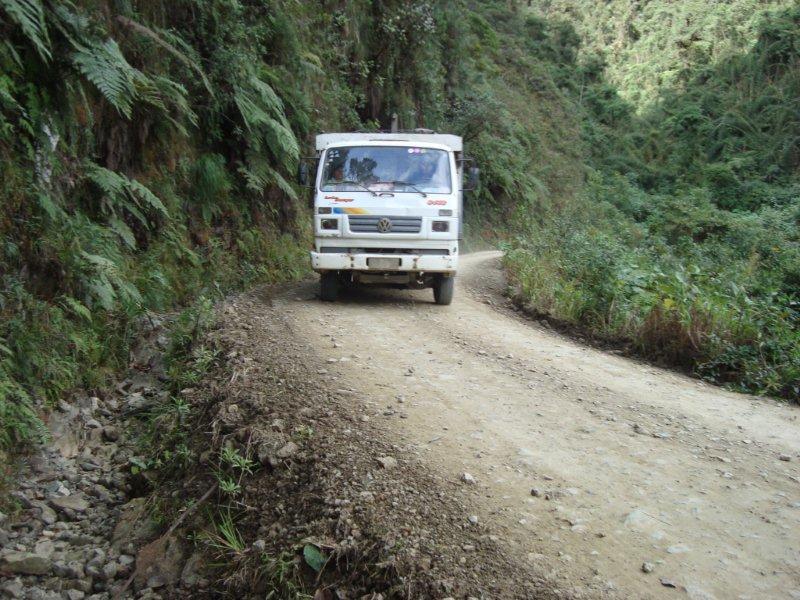 During the entire trip we only met five regular vehicles (without the support cars of the mountain bike tour operators). You can easily imagine how problematic it was in the past when two cars met at the narrowest parts of the road. In particular with such cars: No licence tag, no tyre profile, damaged headlights...

The most popular photospot of the Death Road section at an altitude of 2,400 meters. 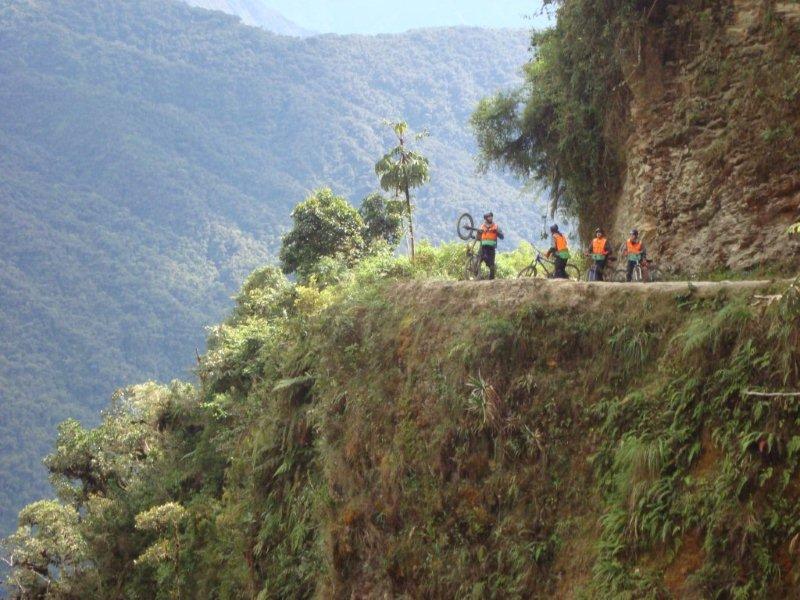 And suddenly all the tourists on their borrowed mountain bikes show up. The typical rider is in his mid-twenties, backpacker and comes from North America or Europe - among them many young women. We met about eight groups each with six to fifteen riders. 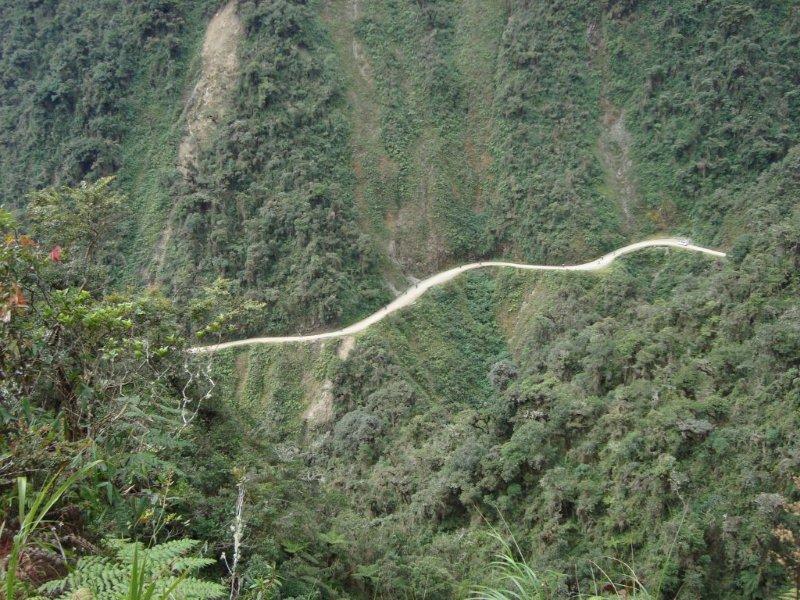 Numerous tour operators in La Paz offer an adrenalin-pumping Death Road downhill thrill on mountain bikes. However, in fact this is only a very slow coasting from curve to curve. The ride is safeguarded by guides and the participants wear high visibility vests. This has nothing to do with cycling (or even "downhill riding") but requires courageousness and deserves respect! All groups are initially being transferred by minibusses from La Paz up to La Cumbre pass (4,700m). That is the starting point for the bike ride and the participants go down on the asphalted road to Cotopata for some 1,500 meters of altitude difference. At that place is the junction to the old graveled Death Road. Down in Yolosa or Coroico all riders get a hot shower and a meal and afterwards the minibusses return to La Paz on the new paved road. The whole trip takes one day and the total costs vary from 70 to 100 US-Dollars (depends on the respective tour operator). 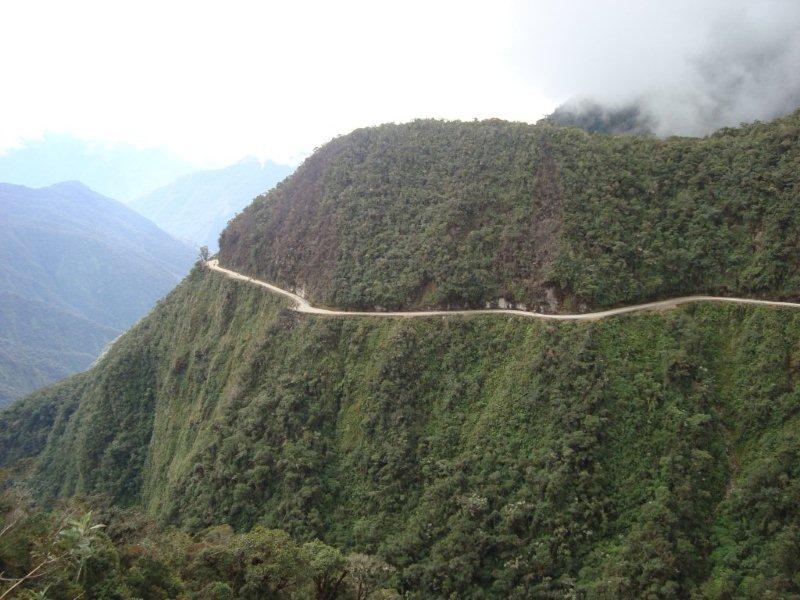 This is the first view on the roadway when starting at the top of the Death Road. 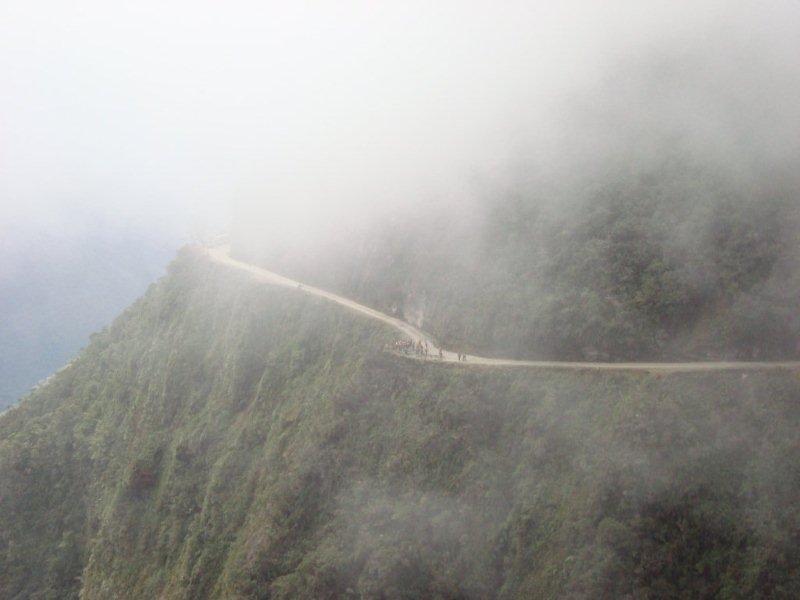 The last mountain bike group starting midday is immediately absorbed by the fulminating fog. I am relieved having arrived at the top after 2,000 meters of altitude difference... 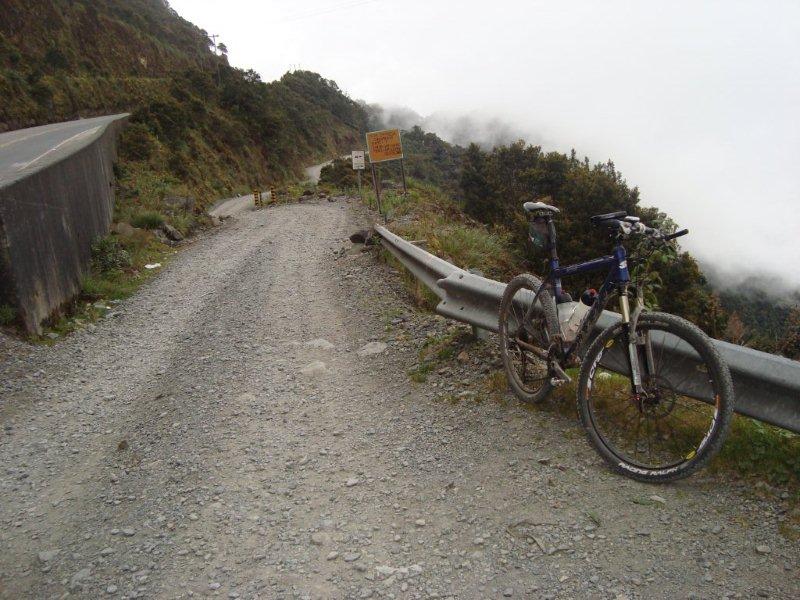 At an elevation of some 3,200 meters is this the exit (and for all others the entrance) of the Death Road. At the left you can find the paved new main road.