Mount Mulhacen and neighboured Pico del Veleta form the two tallest peaks in Spanish Sierra Nevada and on Iberian Peninsula. In the past there was a graveled runway up to Mulhacen accessible by mountain bike. But nowadays the way is in some parts hardly passable but covered with stones and rockfall. Additionally, the way through Mulhacen National Park is no longer permitted to cyclists. And to top it all the tour described below had to be terminated due to weather conditions (heavy snowfall end of October). 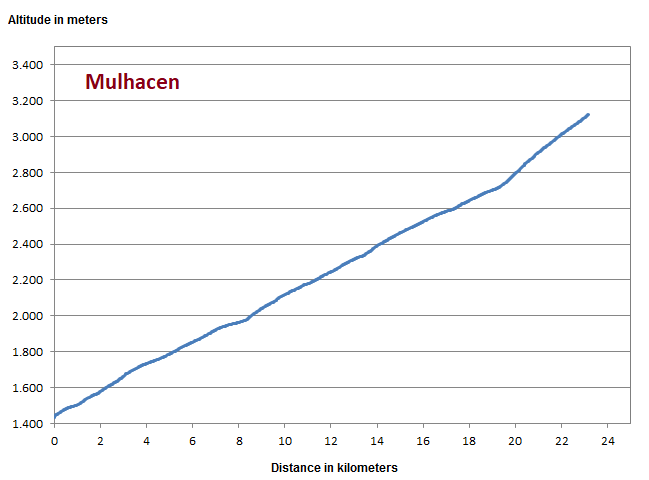 Southern approach to Mulhacen starts in Alpujarra village of Capileira with an average 7% grade up to 2,700m. From here the old runway diverts to Mulhacen summit and becomes much more demanding with an average 13% slope. Total altitude gain to the summit is more than 2,000 meters. You can even start your ride down in Orgiva and extend the altitude gain by additional 1,000 meters. 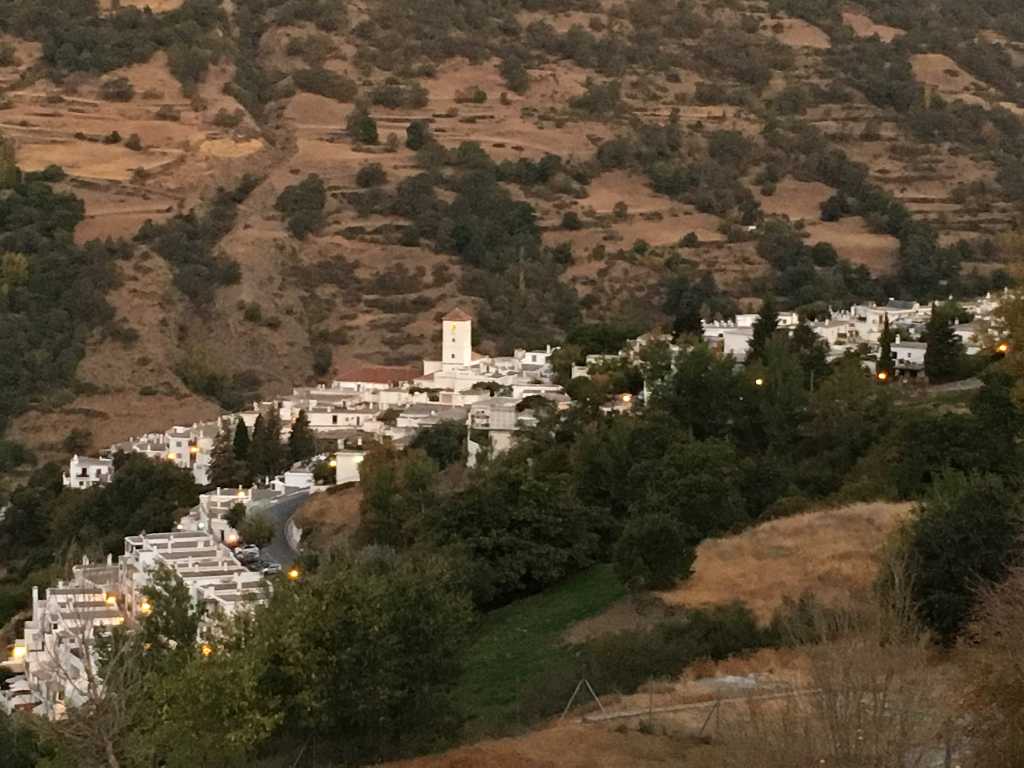 Departure in the early morning in Capileira 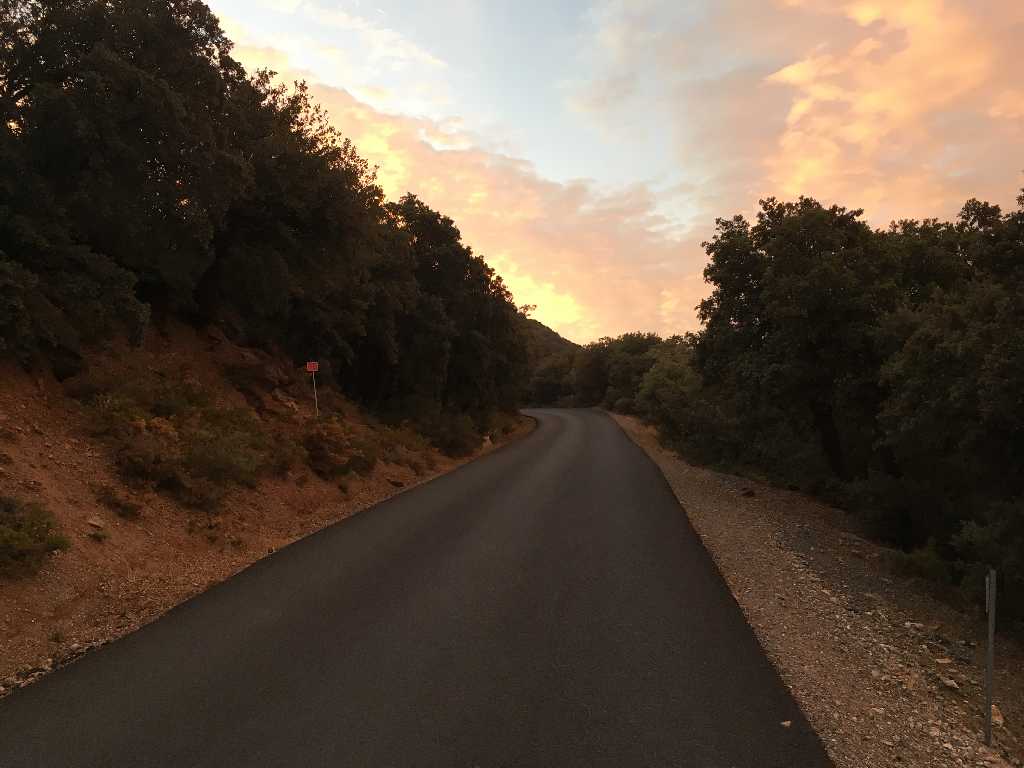 Asphalted road at the beginning 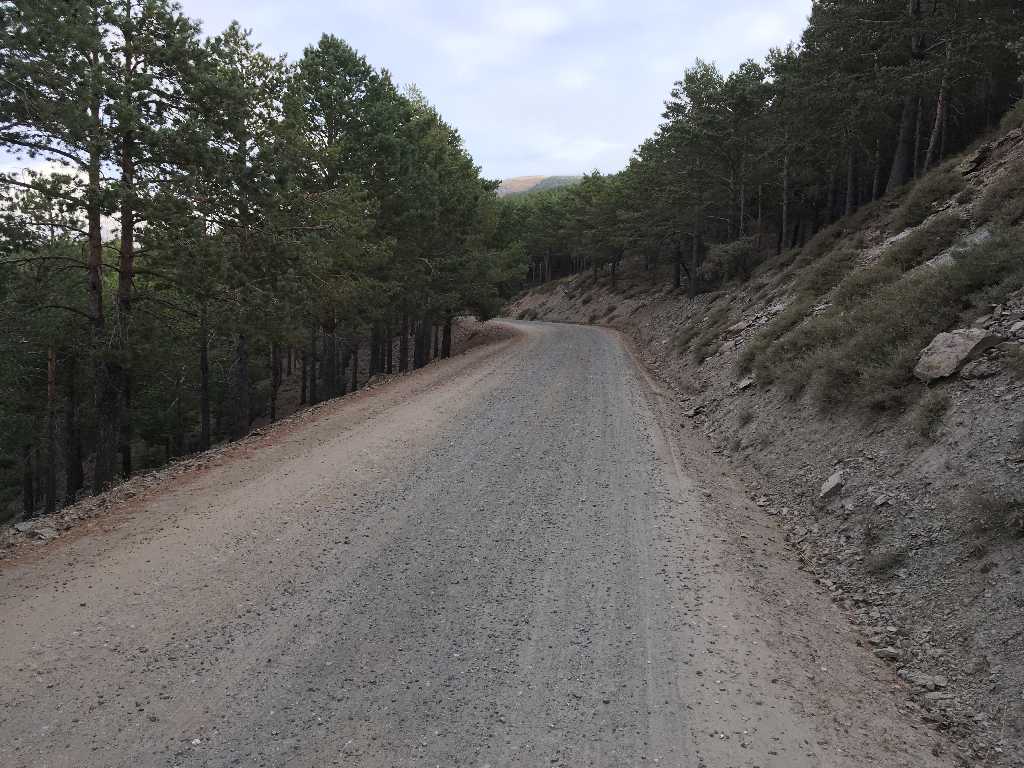 After some three kilometers the way becomes a dirt track. 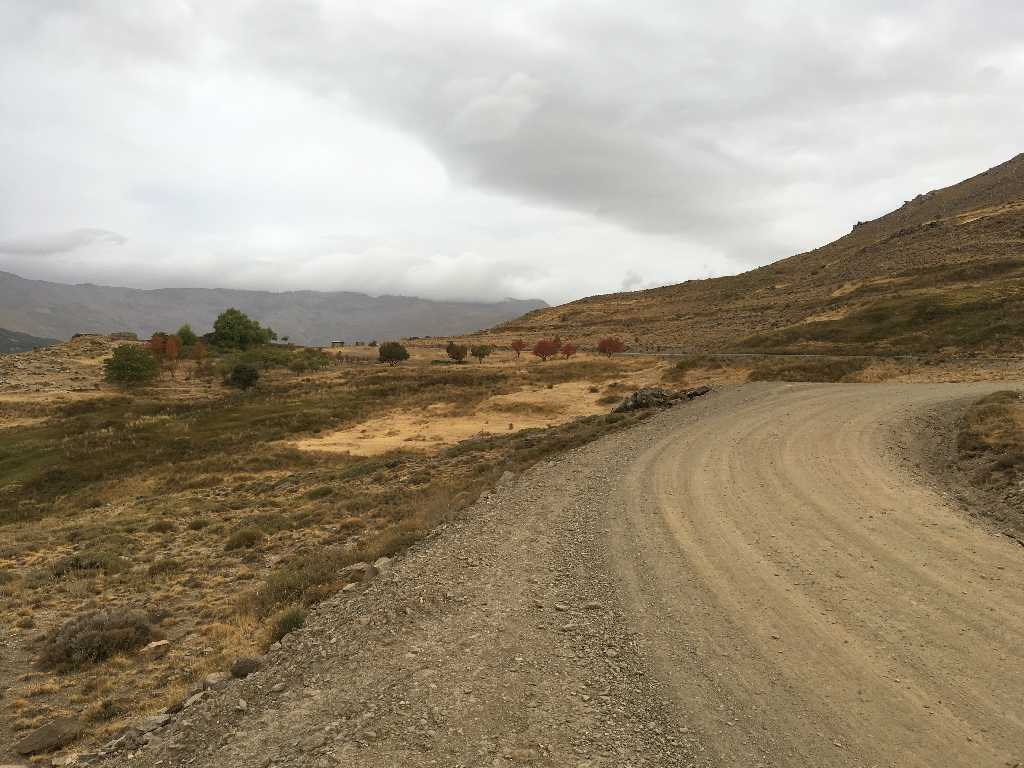 The way winds up on the Camino de la Sierra. And the clouds become dark... 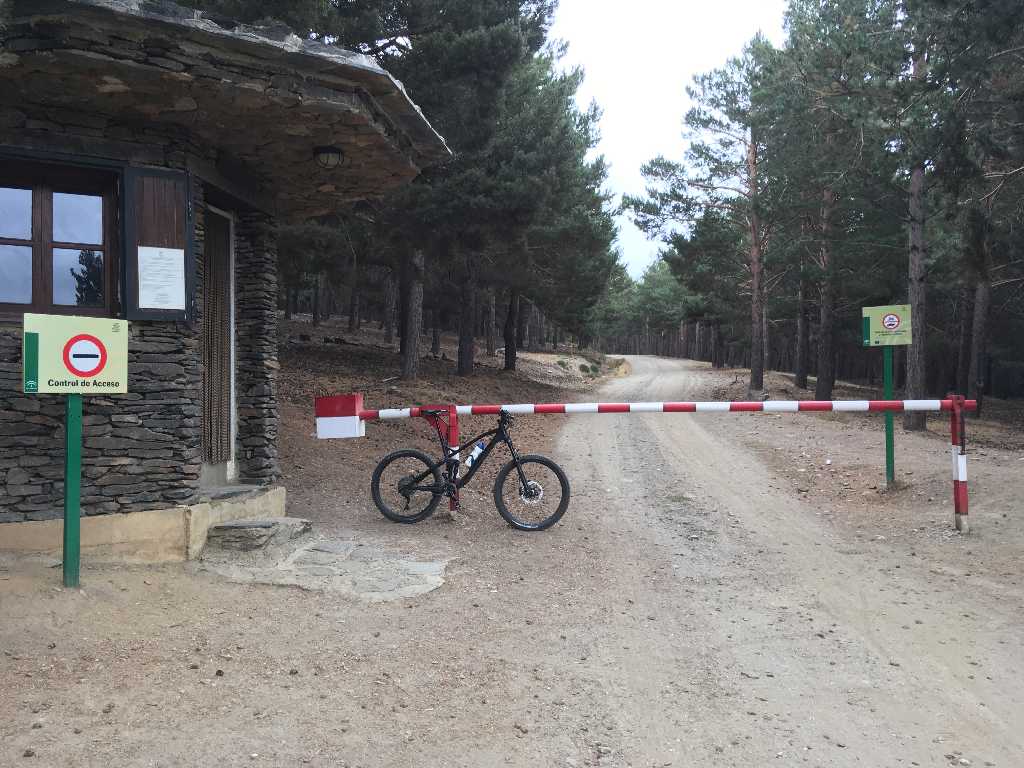 The unpaved public way leads for some ten kilometers up to the parking slot Hoya del Portillo where a barrier blocks any further motorized traffic. 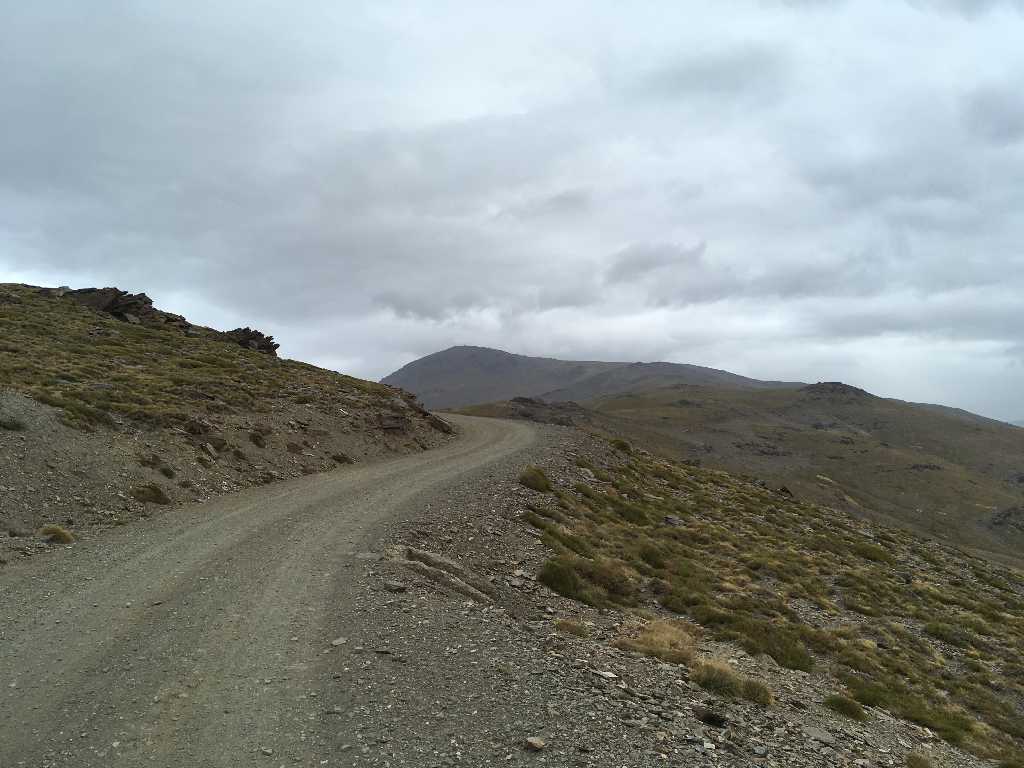 After some more kilometers on the runway Mount Mulhacen becomes visible for the first time. Actually, it is only the southern peak. The summit is even higher and located in the back. 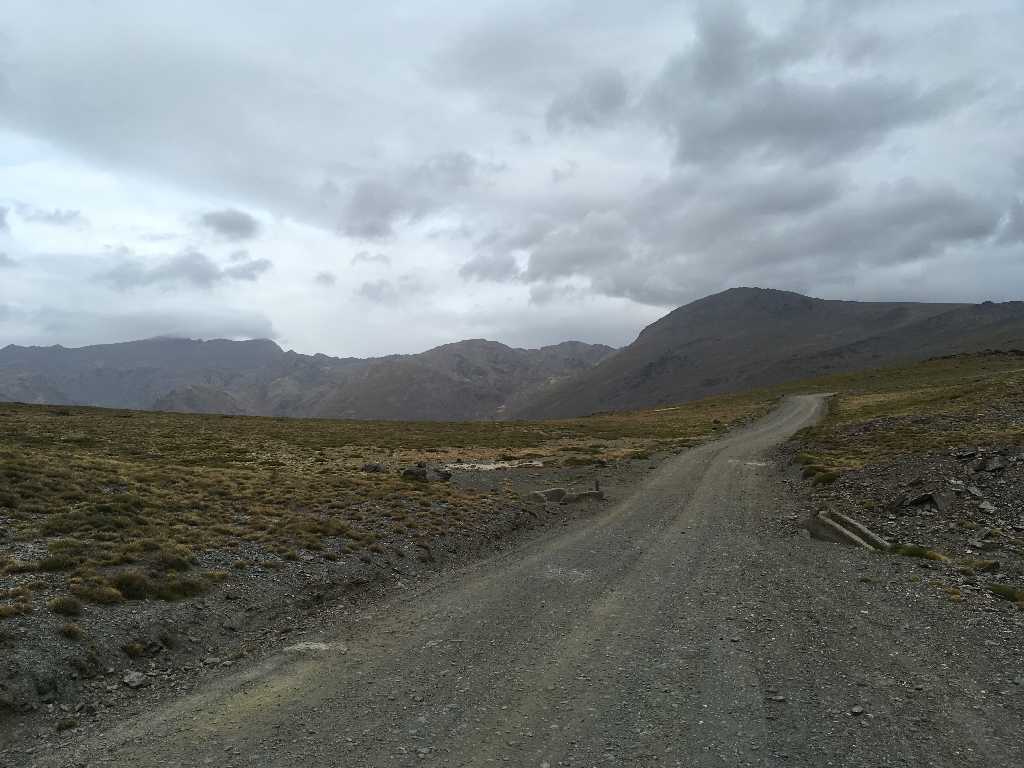 At an elevation of some 2,500m it gets more and more uncomfortable and windy. In the left back midst the rain clouds Pico del Veleta and to the right Mulhacen. 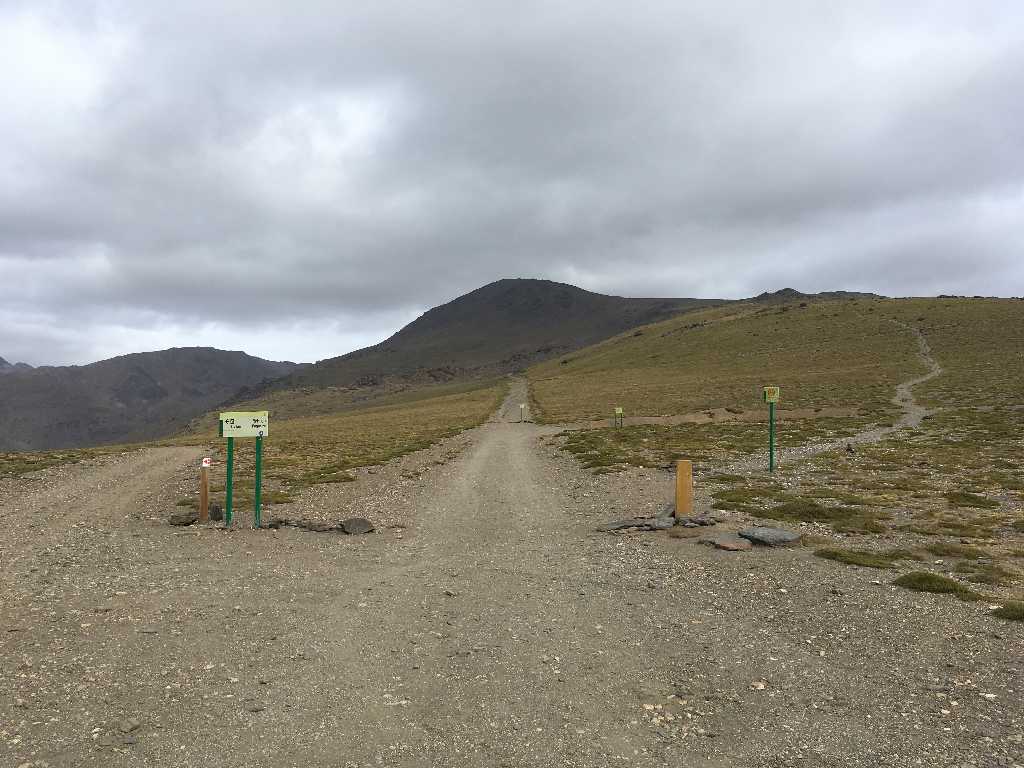 This is the only noteworthy junction on the way to the top: To the left the way down to Refugio Poqueira, straight ahead the way to Pico del Veleta and to the right our today's destination up to Mulhacen, either direttissima hiking path or two hundred meters in the back on the old runway.

360° view of the junction spot 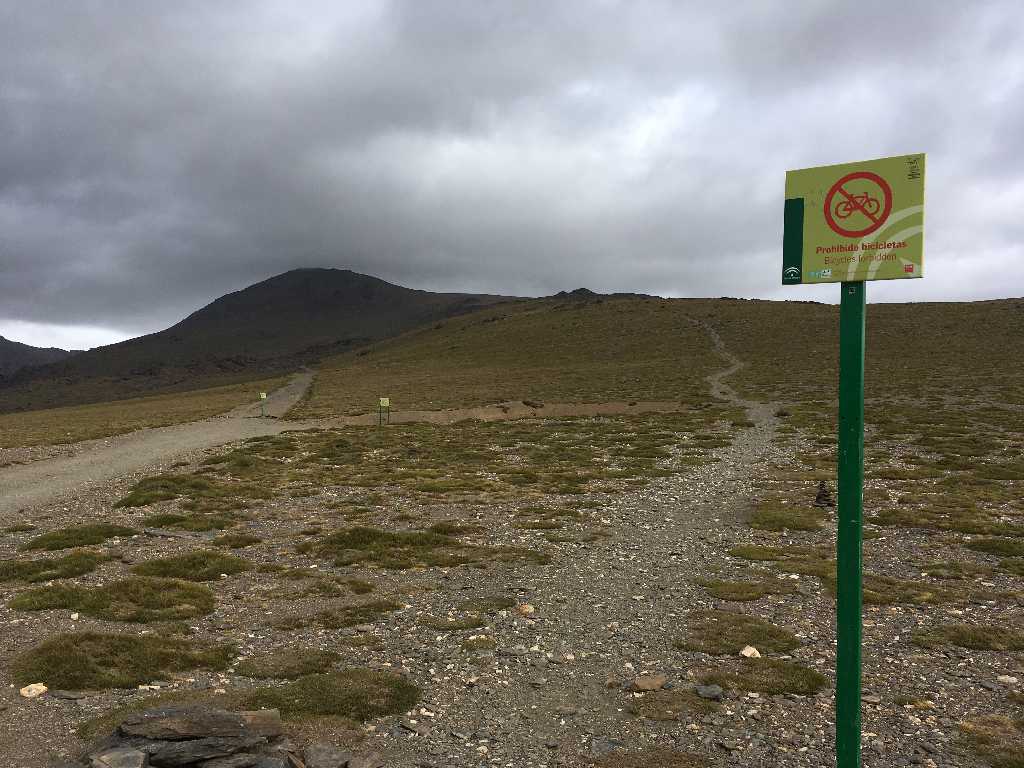 However, we now face a significant problem that was unknown before: The way is explicitly prohibited to mountain bikers! The sign in the back also states a ban to cyclists. Only the straight ahead way to

If I had proceeded my ride I might have phrased the following: 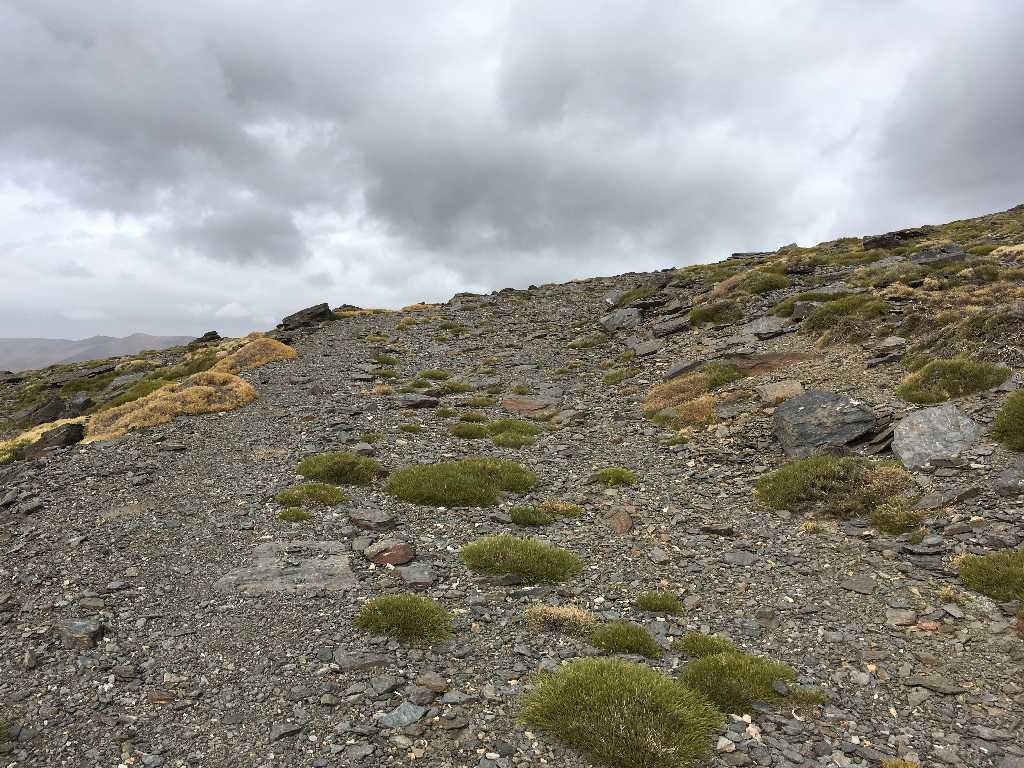 The old way is partly still cyclable but becomes very stony and steep in some parts. 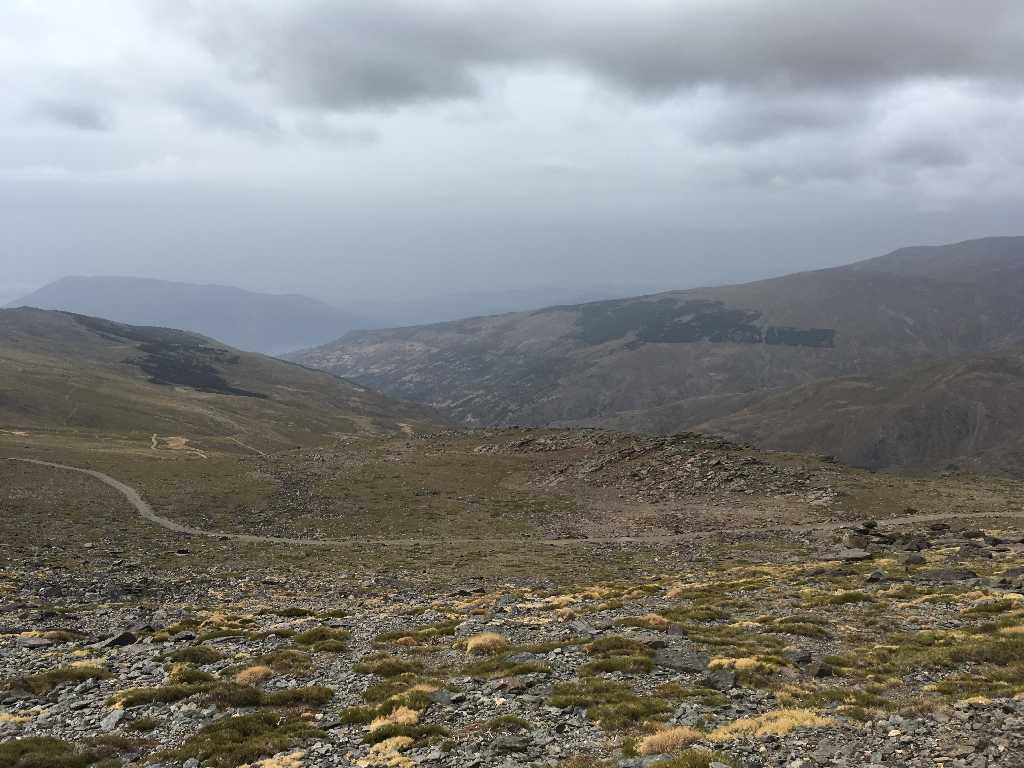 View down to the way to Veleta and in the back the dark clouds approaching very fast... 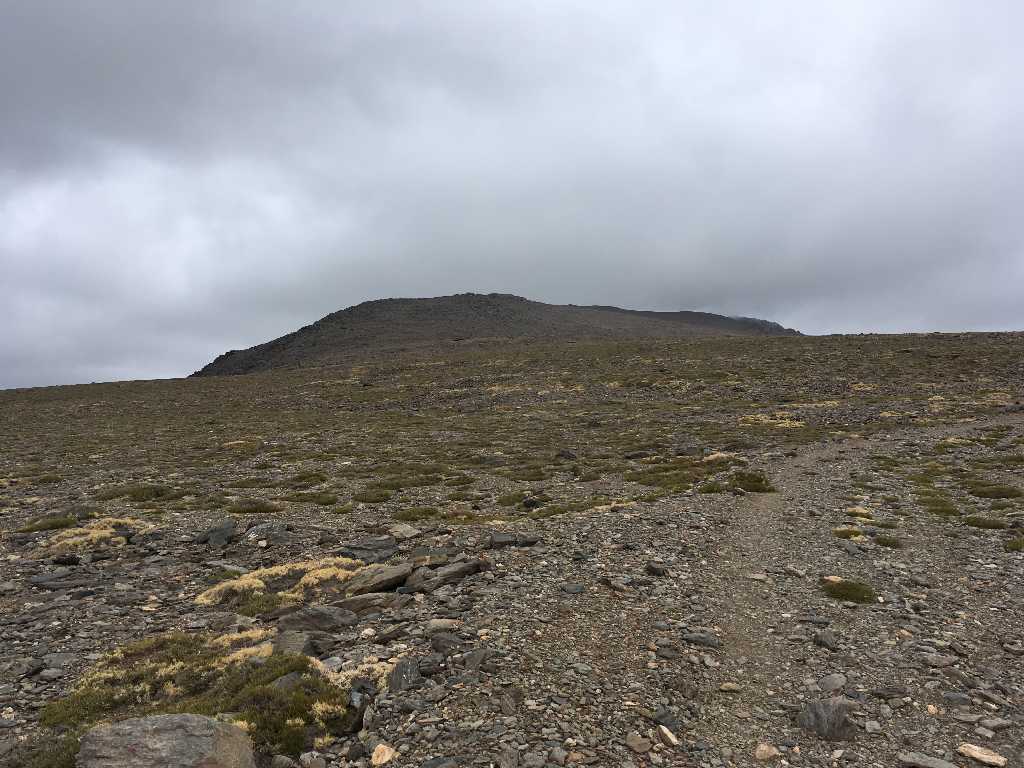 The long ridge of Mulhacen 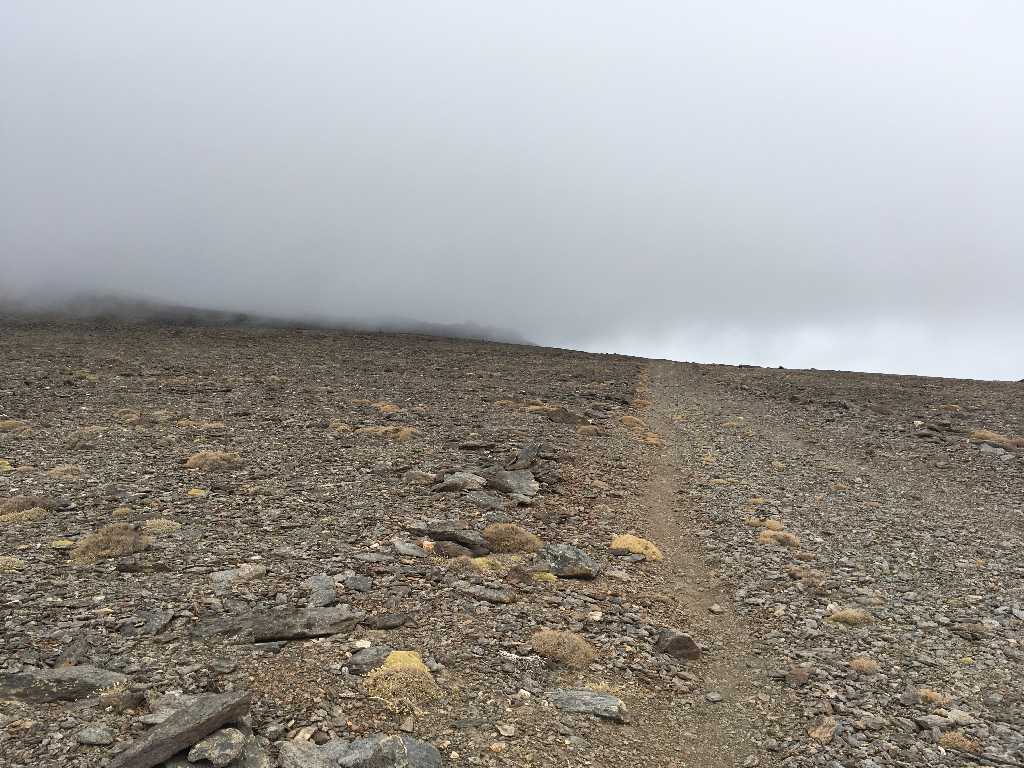 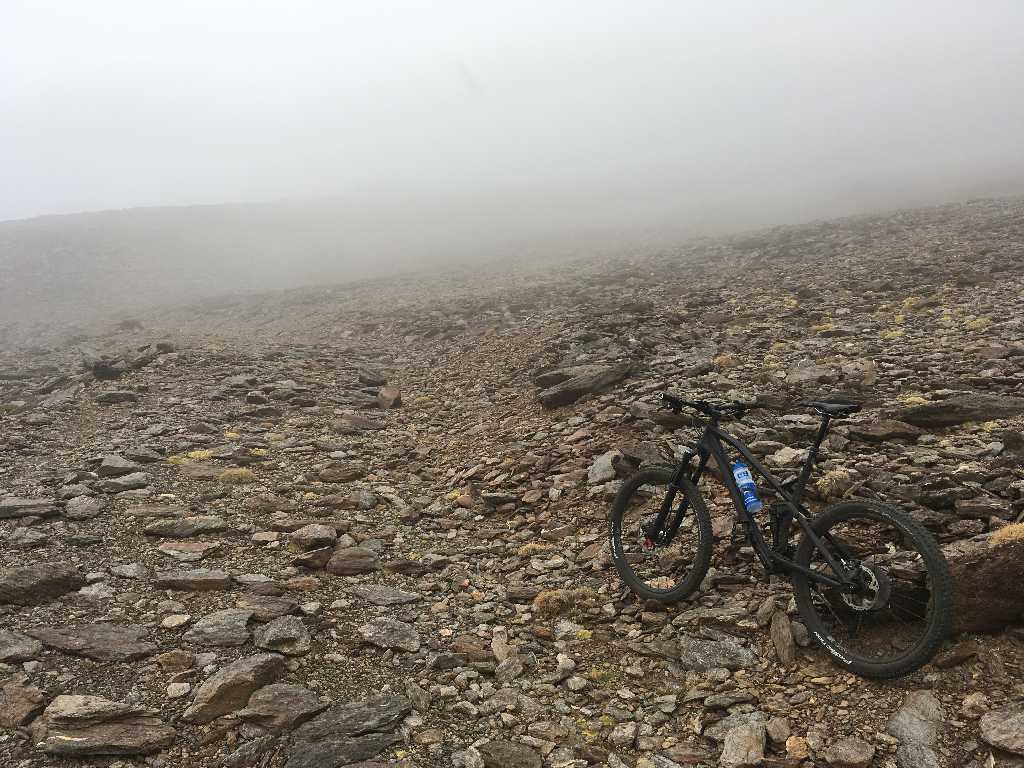 Heavy rain, hail and snow make it very uncomfortable and the way no longer visible. Additionally, my GPS device and my smartphone run out of power in the icy cold conditions. 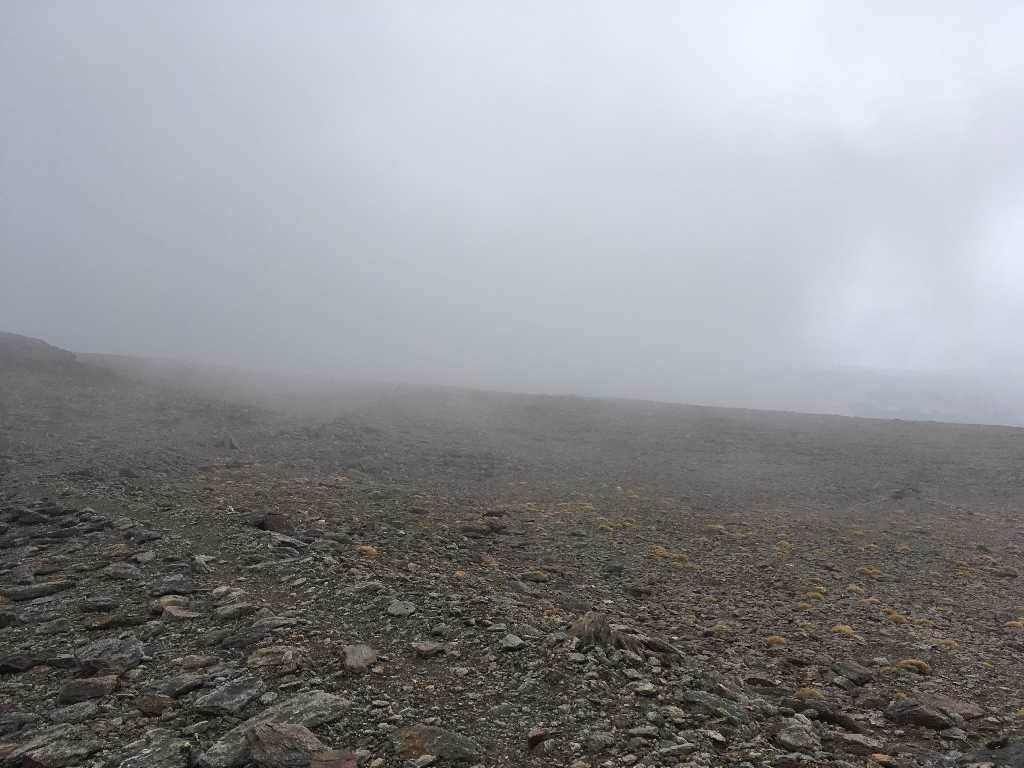 How to proceed? Windchill temperatures drop significantly below nil and the weather will even become worse. However, this is likely Europe's highest way for cyclists and Mulhacen might be a very attractive summit to add to the trophy collection. 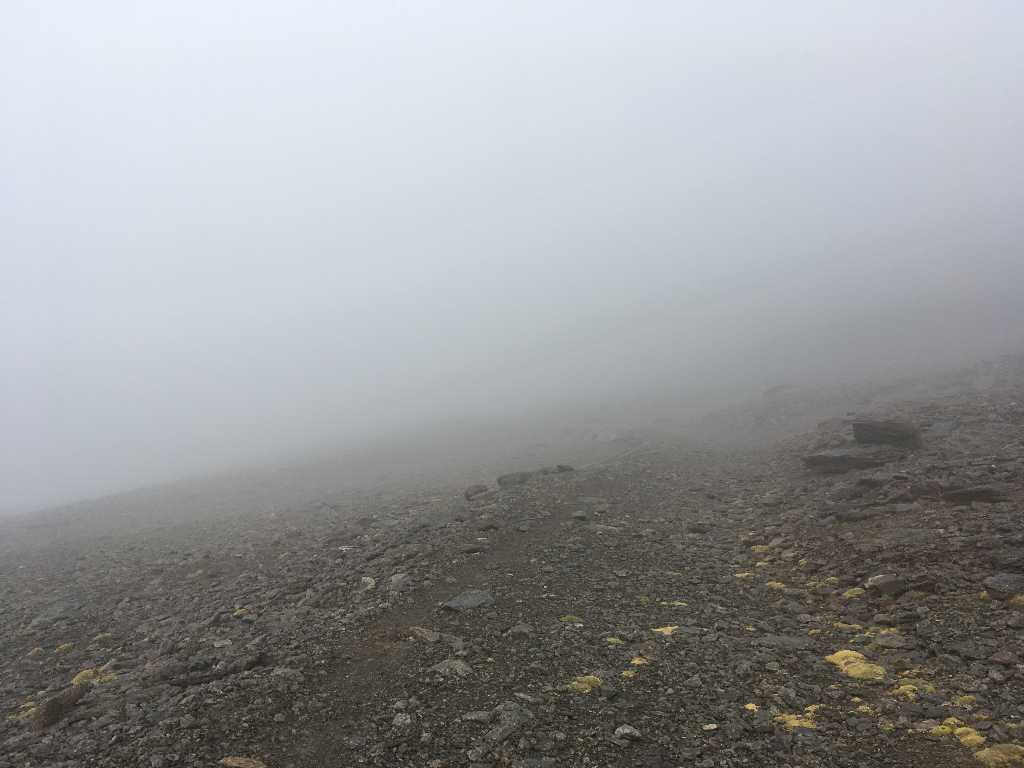 Way to the summit? Or the return way? I lose sense of direction... 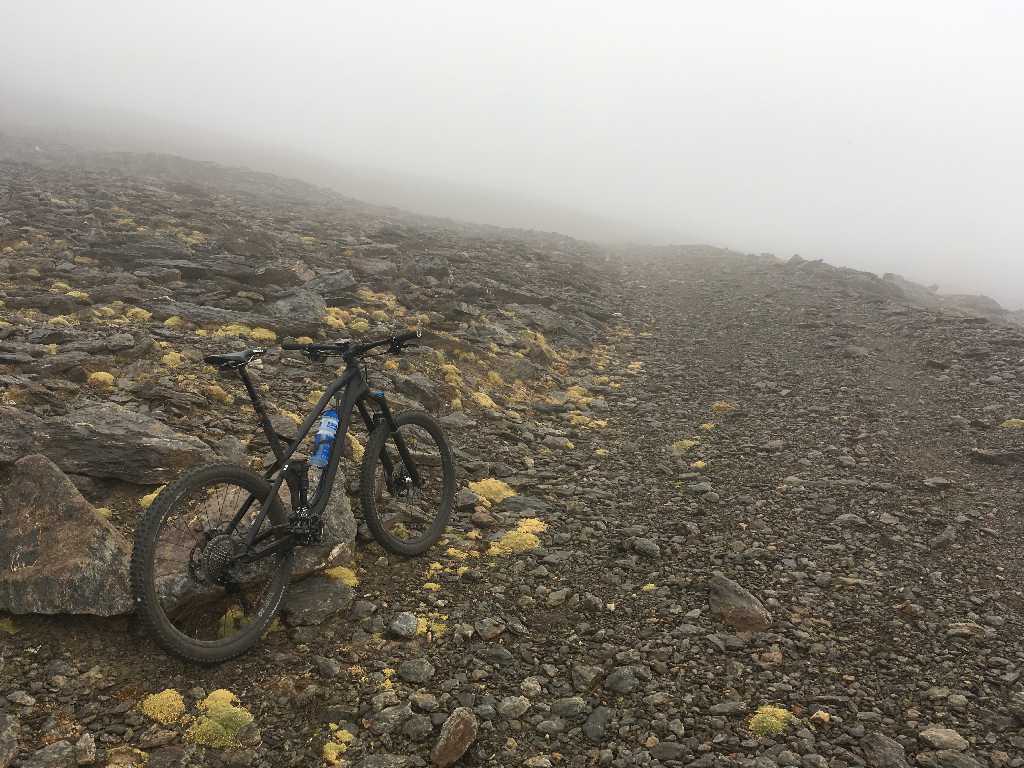 Remaining way to the summit is only 230 meters of altitude and 1,500 meters of distance, but ending the ride becomes unavoidable at an elevation of some 3,250 meters. 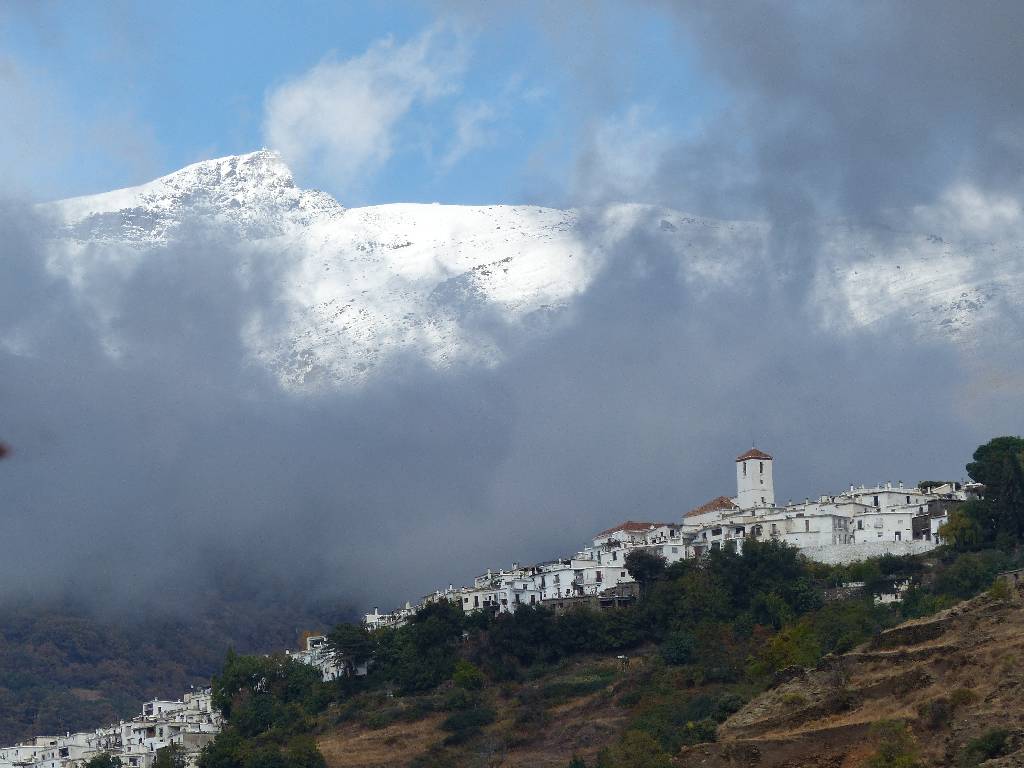 Only after 36 hours of snowfall the clouds disappeared and the peak of Pico del Veleta became again visible in the back of Capileira. And ten days later the weather turned much better and gave the opportunity to ride Pico del Veleta from the south.