Ethiopia's Bale Mountains National Park is situated some 450 kilometers southeast of Addis Ababa. The National Park is being traversed by a rough road through the Sanette Plateau at an elevation of 4,000 meters above sea level. A small way diverts from this road up to Ethiopia's second tallest mountain - the Mt. Tulluu Dimtuu with its peak at 4,377m. A telecommunication facility is situated on top of this extinct volcano and can be accessed by mountain bike. 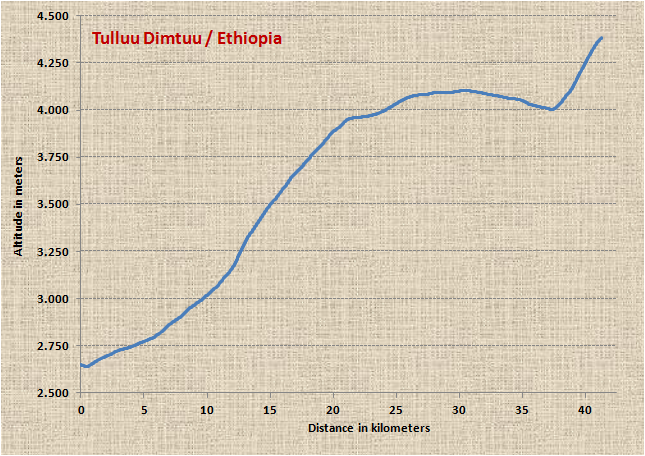 The ride commences at an altitude of some 2,600 meters in the small town of Goba. The route leads up to the entrance gate of the National Park at 3,500m and after 20 kilometers of distance the stormy Sanette Plateau is reached. The way subsequently winds further 17 kilometers without any substantial altitude gain to the diversion to the Mt Tulluu Dimtuu peak. And finally you have to conquer the last four kilometers to the top of the mountain. The actual elevation and the total altitude gain are similar to the rides up to Mauna Kea on Hawai'i or Mount Evans in the Rocky Mountains. 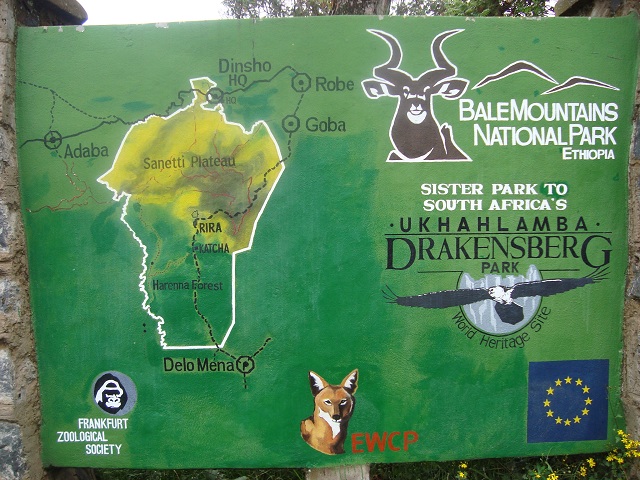 This sign at the National Park headquarters in Dinsho shows the route of the road from Goba through the Sanette Plateau. Mt Tulluu Dimtuu is located in the dark coloured middle of the Plateau. The National Park project is funded and supported by the Frankfurt Zoological Society and the European Union. 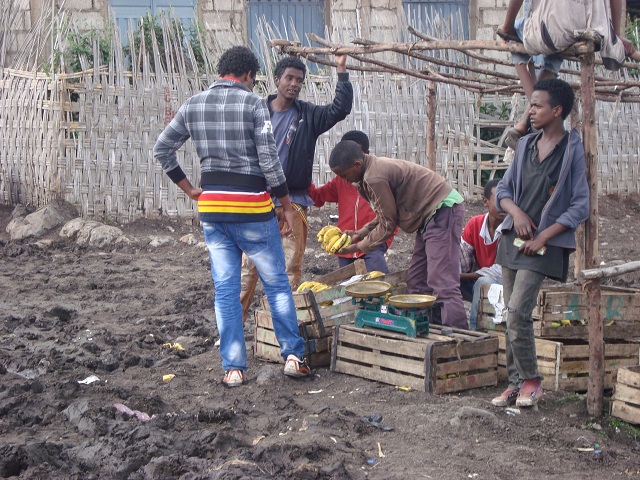 Bananas and water can be bought on a local market... 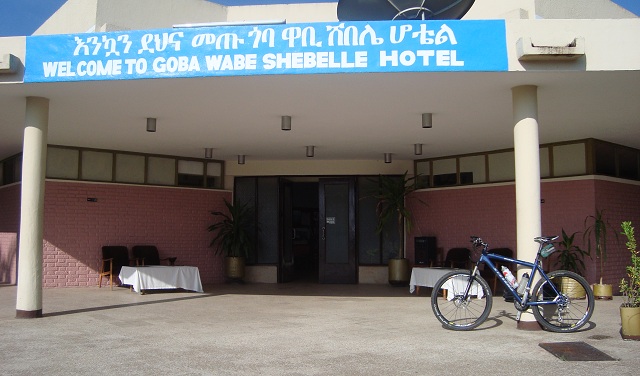 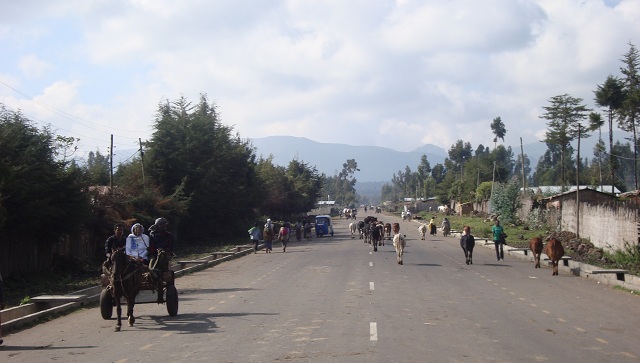 Main transportation means on the roads of the town are horses, donkeys and few small taxicabs. As "Ferenji" riding a mountain bike with disc brakes, front suspension, cyclometer, altimeter and GPS-device I become unintentionally a real eye-catcher. 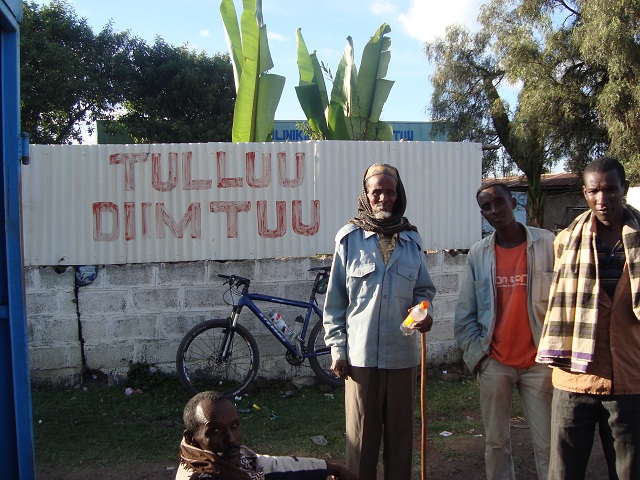 Local hospital is named after the mountain and provides a pleasant photo spot (and hopefully not a bad omen). 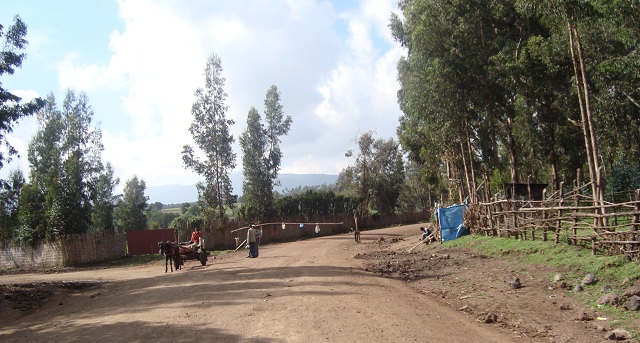 Behind the village of Goba the road commences up to the National Park. Roads surface consists of a cement-gravel mixture which can be cycled properly.

Lower part of the route leads through green wood land and provides after a few kilometers a first amazing highlight of the trip: A pride of baboons with pups is crossing the way! 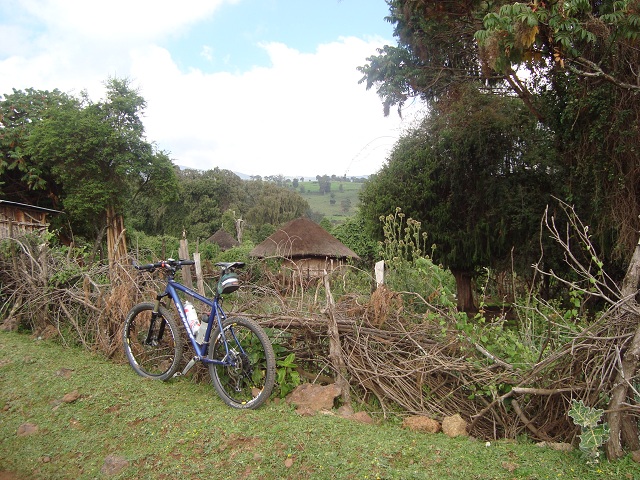 Typical Ethiopian mud huts with thatched roofs alongside the road 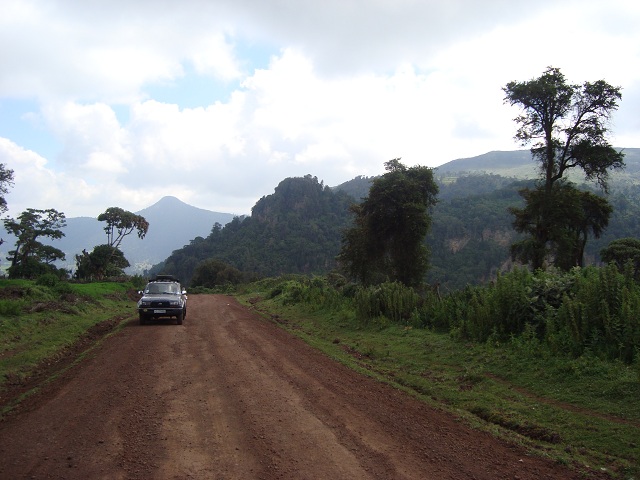 A support car with local guides stays all the time nearby. 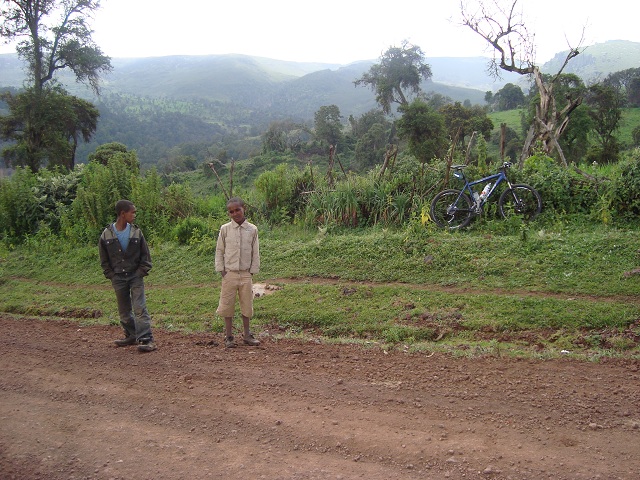 In particular, children show up curiously but respectfully interested in the strange guy riding on its bike.

View from the entrance of the National Park down to the lowlands with the villages of Dinsho and Goba. 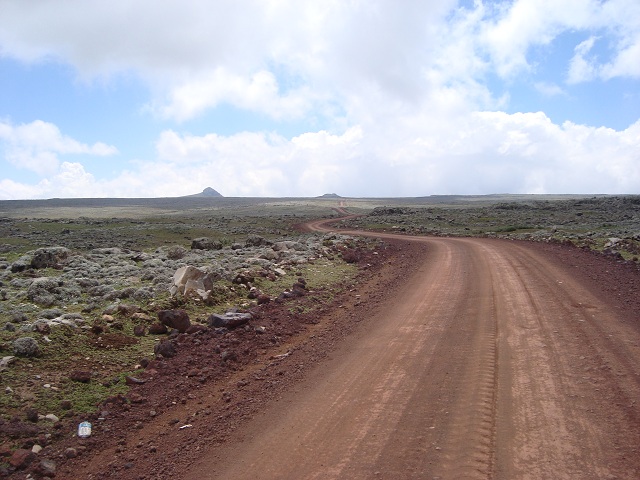 According to the very few accessible information about the way to Tulluu Dimtuu I expected a total distance of 38 kilometers. But being already on an altitude level of 4,000 meters I wrongly act on the assumption to be close to the summit and do not dress and eat properly. However, on Sanette-Plateau you have to overcome a 17 kilometer long areaway with frosty winds and Mt Tulluu Dimtuu is only situated behind the two hills at the horizon. 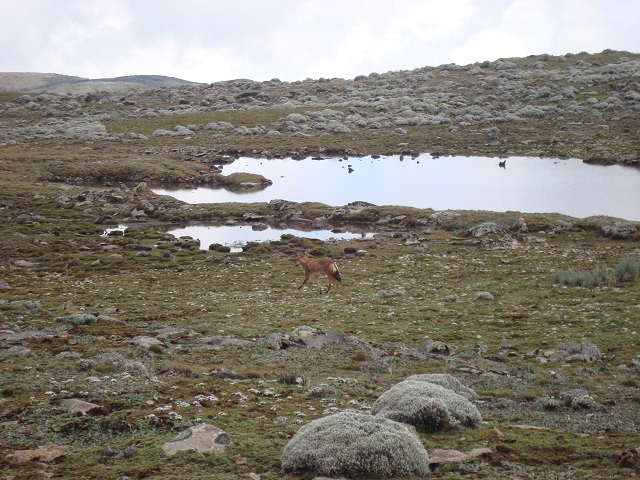 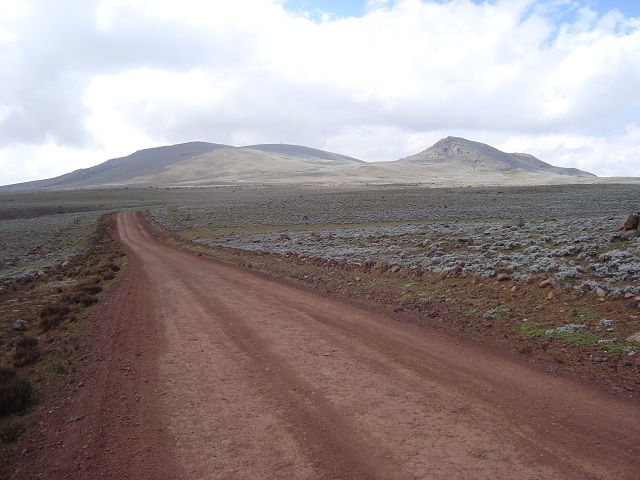 After an endless ride through stormy and cold Sanette Plateau the Mount Tulluu Dimtuu can be seen at the horizon for the first time (the dark hill in the center of the image with the tiny spot on top)! 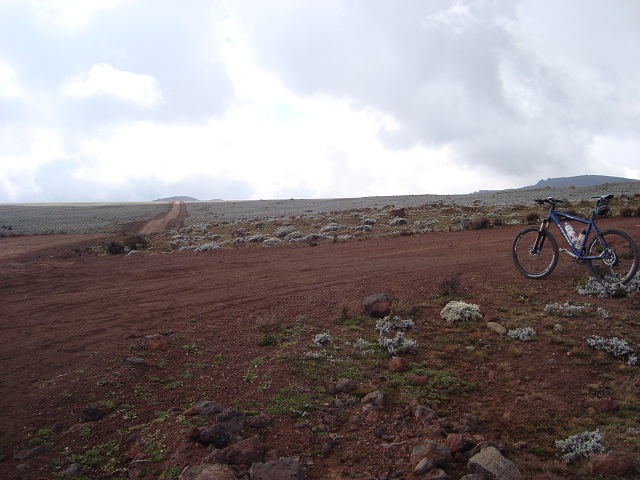 The diversion to the summit has been reached at this point. If you went down straight-on you get to Harenna Forest. My local guides insist on the fact that leopards and lions live down there.... 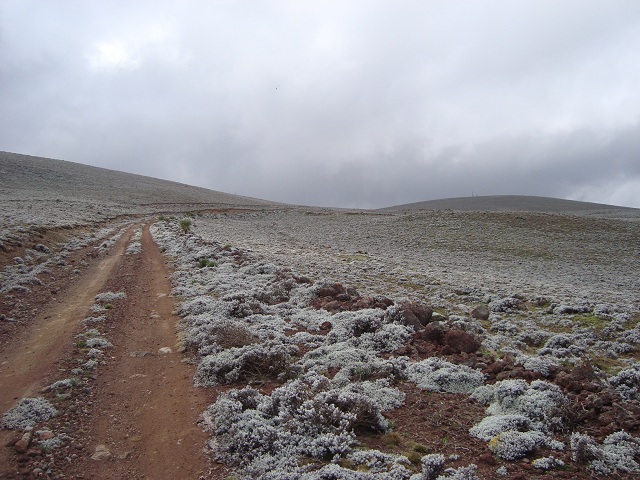 The final way up to the summit is steep and narrow but can be cycled. 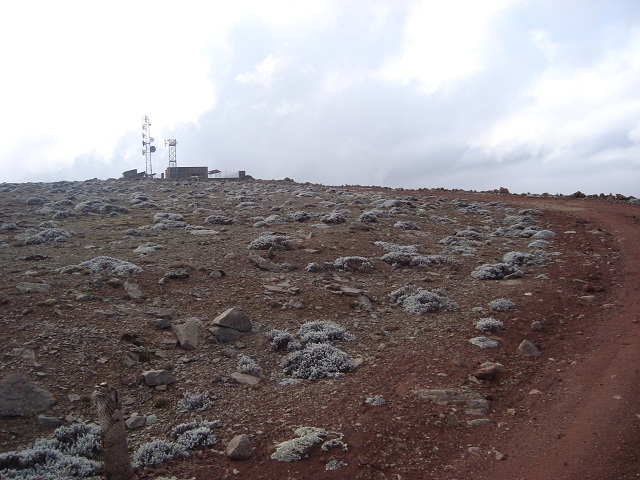 The actual temperature has meanwhile dropped down to only few degrees above nil (Celsius) and the strong wind has become very chilling. Far too late I decide for wormer clothes. Totally exhausted by the long distance with decreasing oxygen in the air and undereated I have to stop my ride with only 1,000 meters to go. Thus, I have to walk the final meters and to push my bike. This is the view on the last meters to the summit. 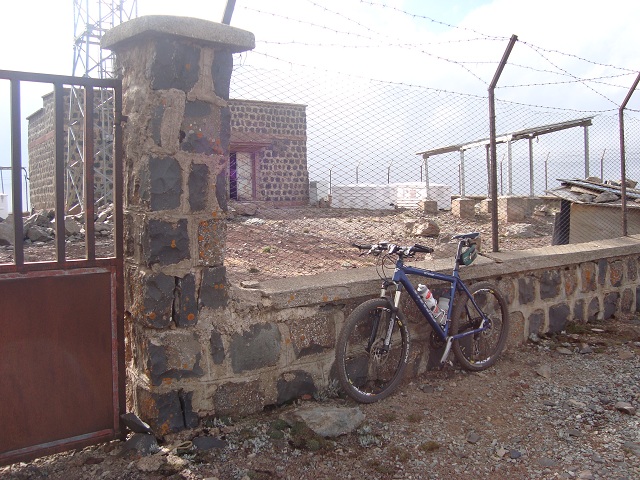 On summit there is no pass sign but only the telecommunication facility guarded by a single person. My two GPS devices independently report an altitude of 4,382m and 4,384m and thus almost confirm exactly the offical elevation of 4,377 meters. 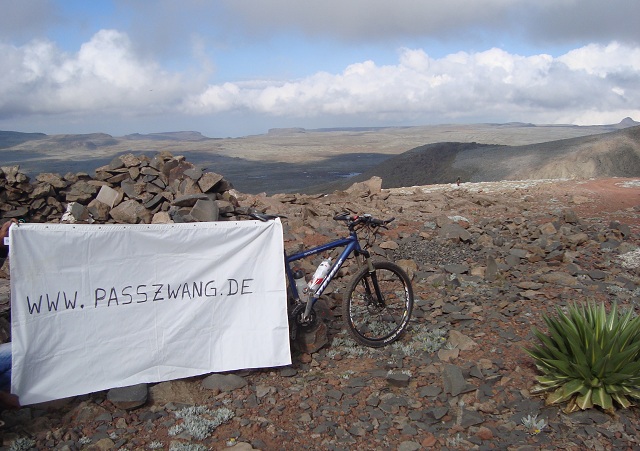 And finally a pleasant picture on the summit...