The "Malta" leads up to the Kölnbreinsperre in Carinthia, which is Austria's largest water reservoir and serves to generate electricity. Over the years, the road has been developed for tourism and a toll has been charged for motor vehicles. Characteristic of the route are numerous tunnels, the first (and longest) of which is unlit. As a cyclist, it is essential to carry lights with you.

The first 15 kilometres to the toll station are still quite moderate. From the beginning of the toll road the average gradient is more than 7%. 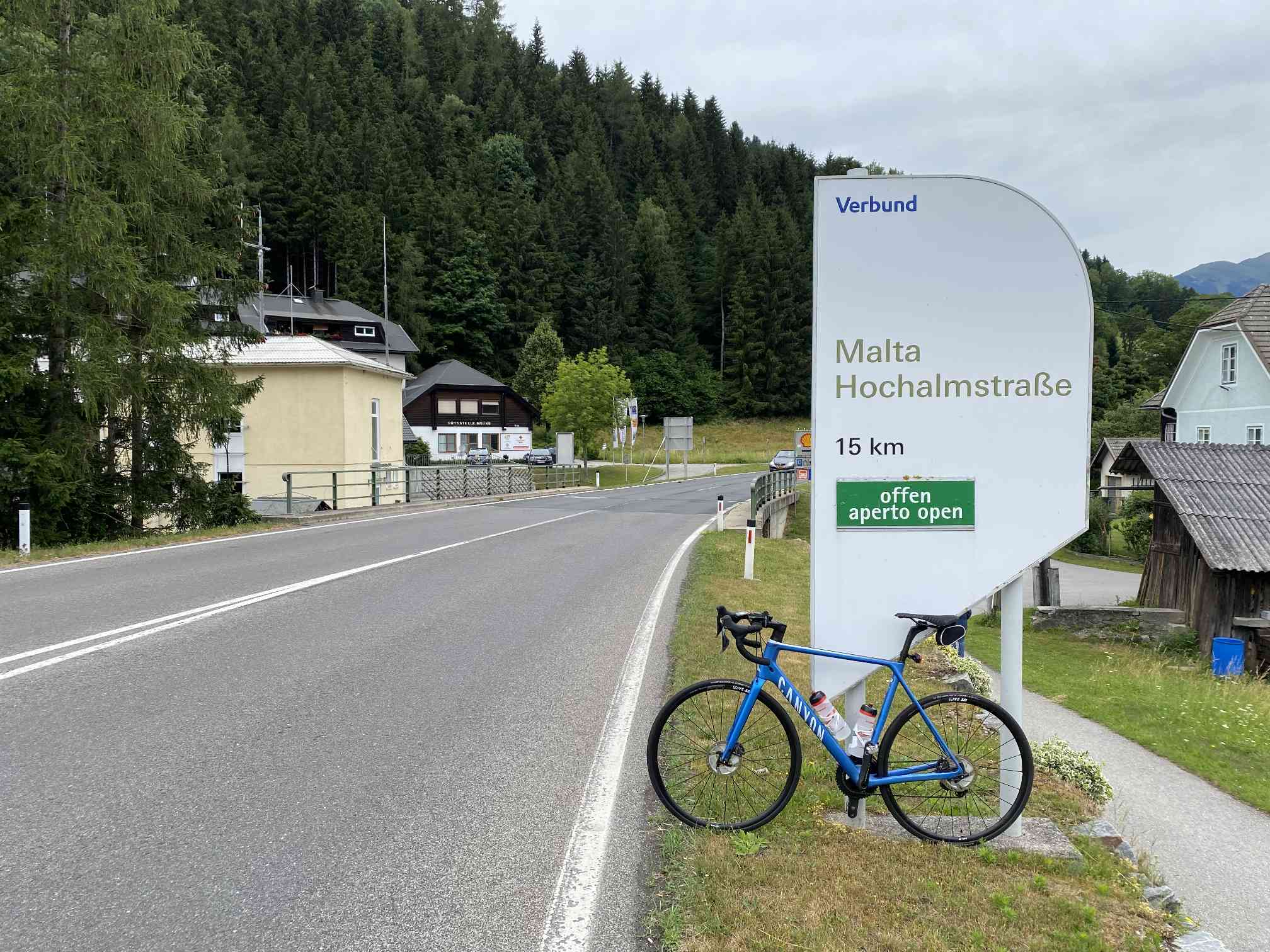 Start in Gmünd. The "15km" means the way to the start of the toll road. 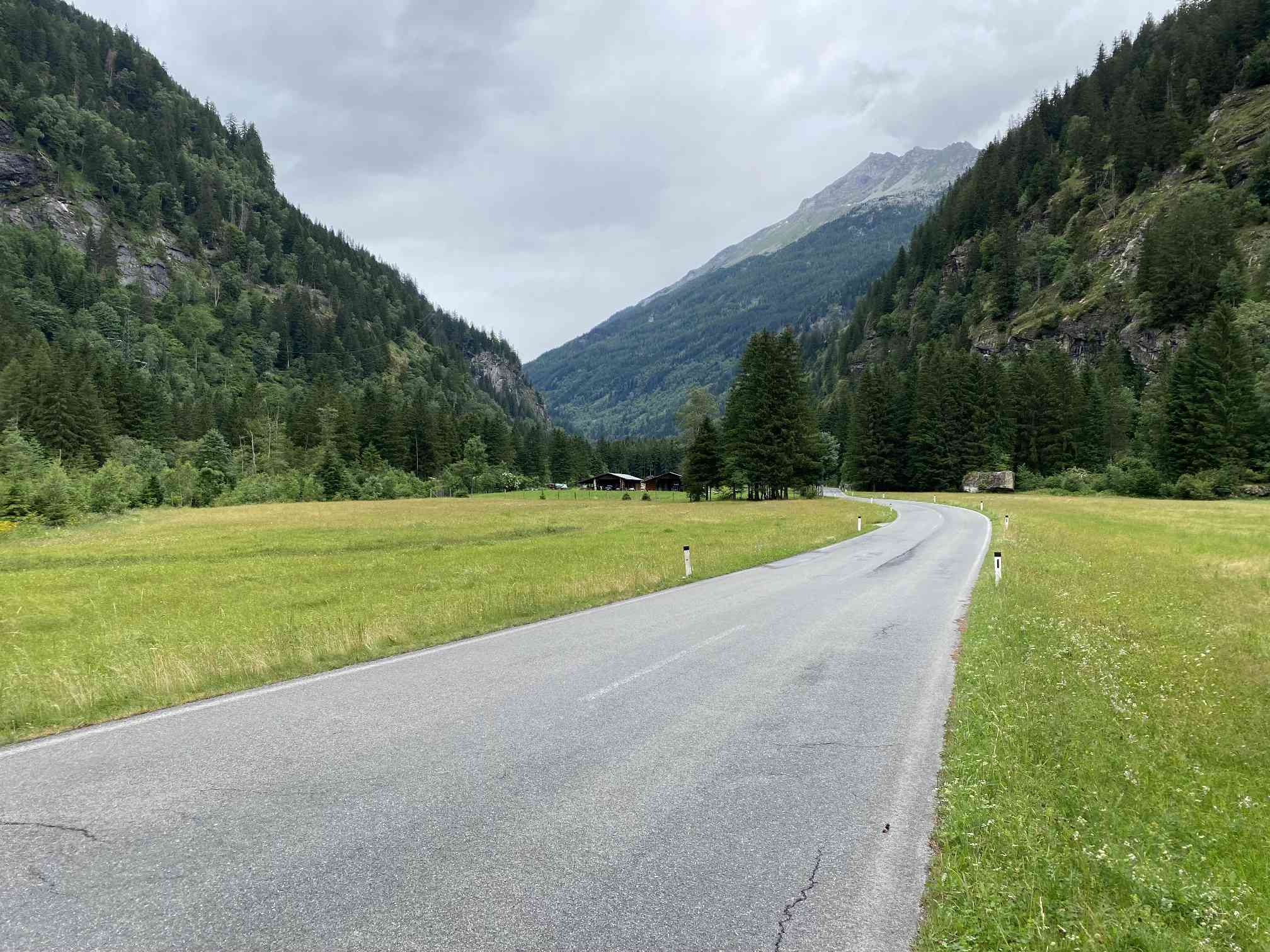 The route leads leisurely down into the valley. 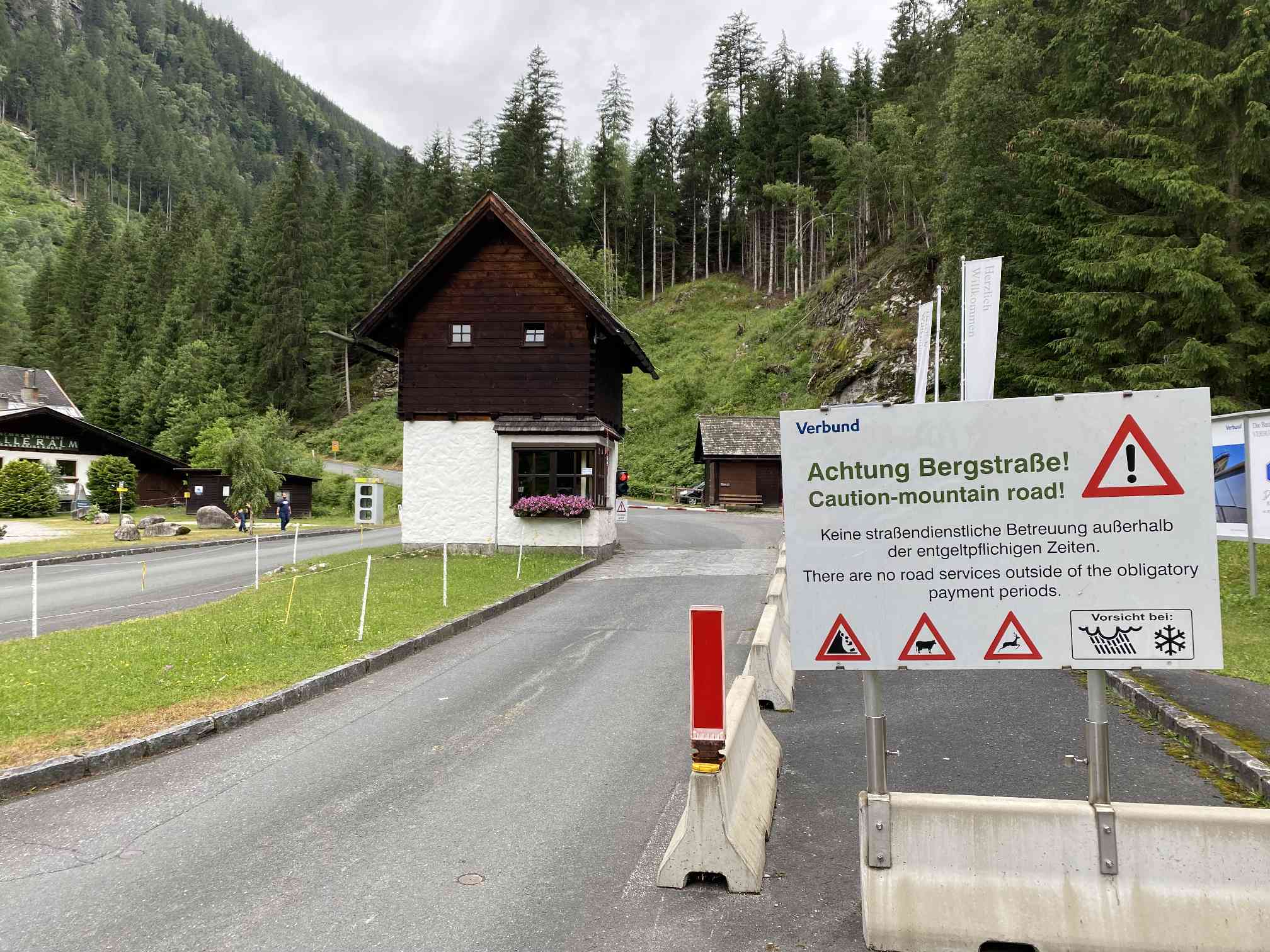 At the toll station, cyclists are waved through free of charge with the advice to be equipped with lights. 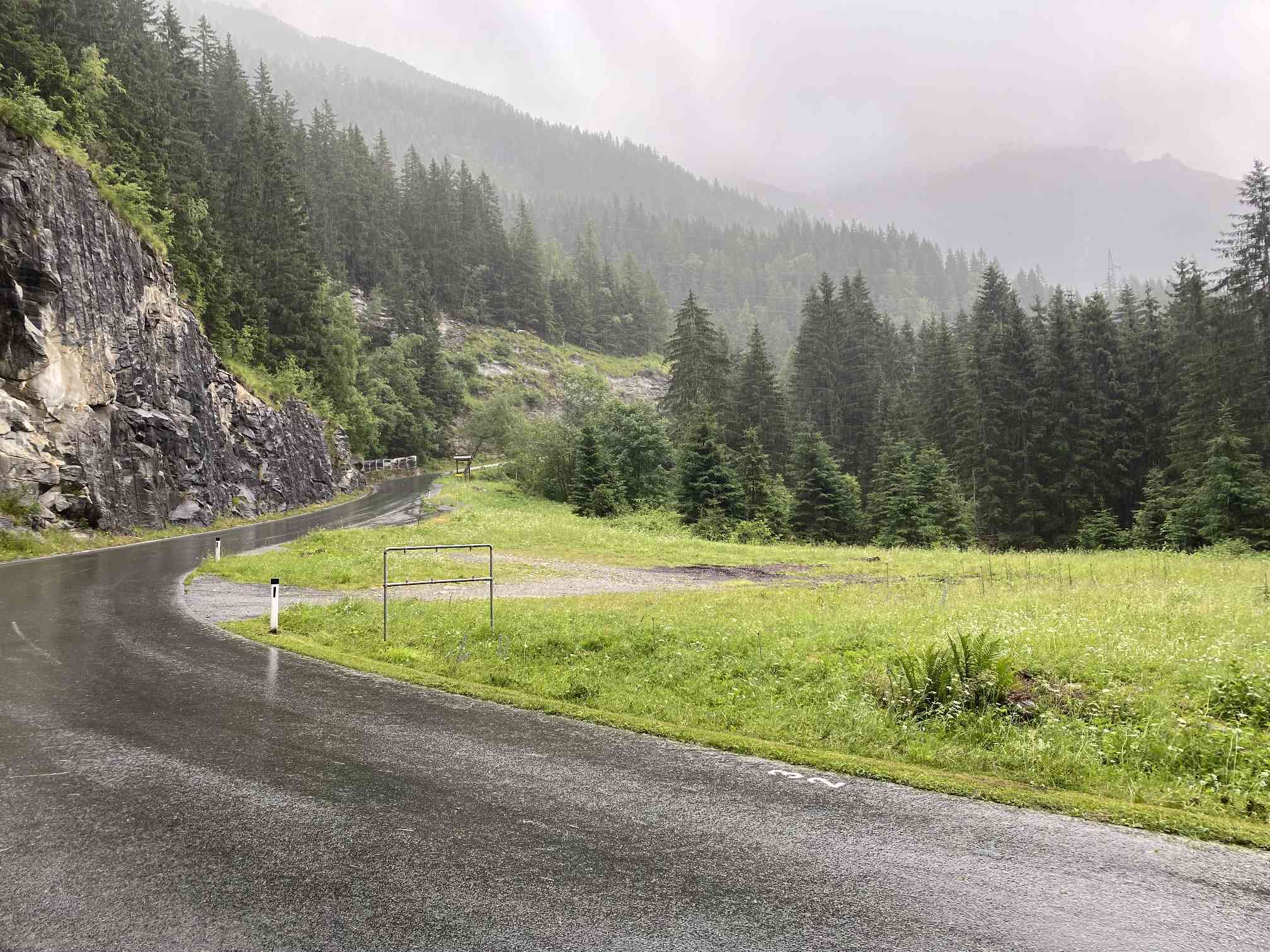 Unfortunately, contrary to the weather forecast, it starts raining all the way to the summit...

And shortly afterwards we reach the first tunnel. It is more than 500m long, damp and dark. Today I have lights with me and I am really happy about it. (Contrary to old reports, the following tunnels are all dimly lit by now). 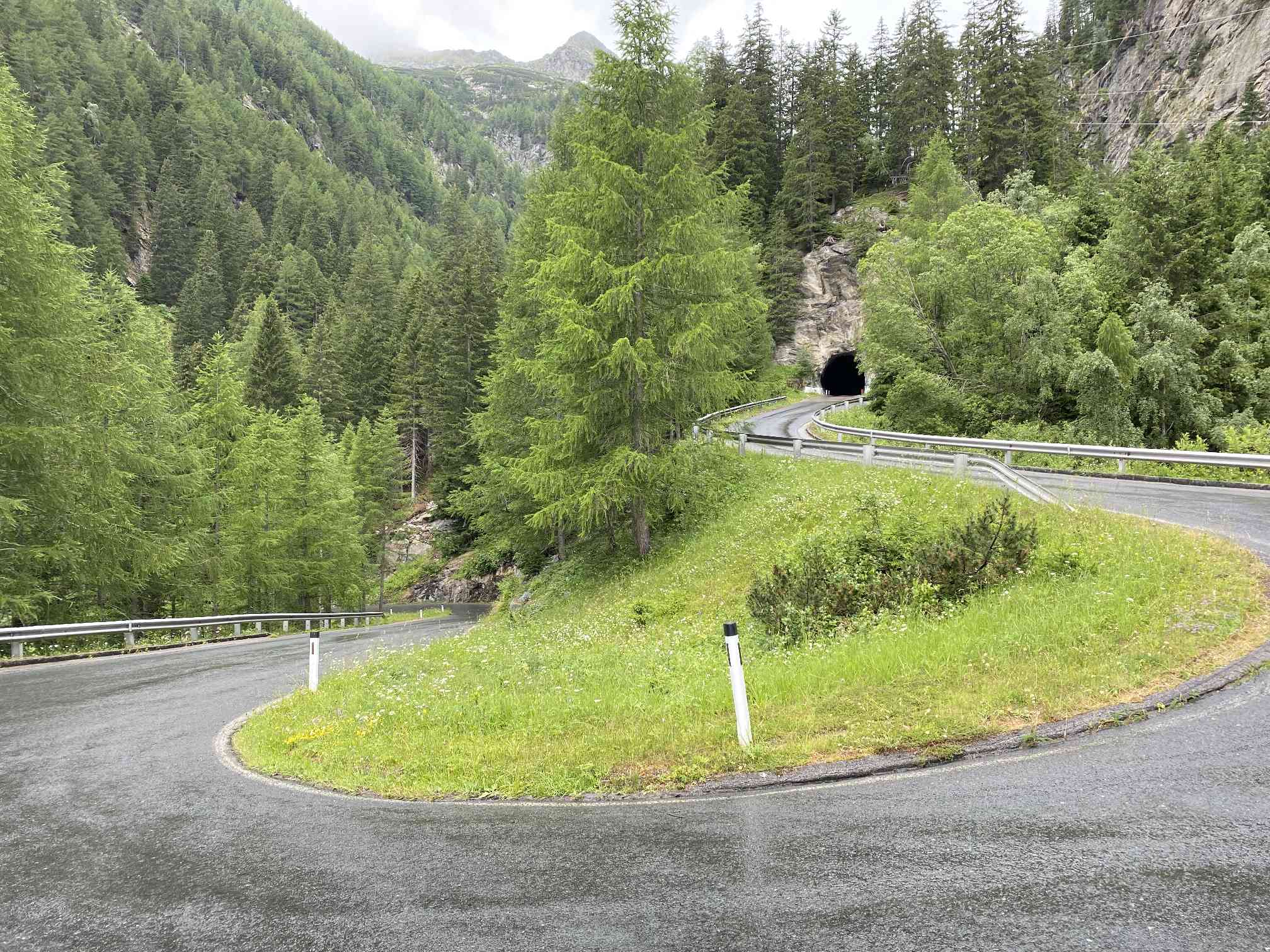 A few hairpin bends give some pleasure.

A curiosity follows: at a bottleneck there are traffic lights for all vehicles, which, according to the information, stay on red for up to 20 minutes. I was told to wait 16 minutes, but in fact it was much shorter. After two hairpin bends, there is another set of traffic lights especially for cyclists before the next tunnel, which is less than 100 metres long but makes a 180-degree bend and is completely hidden from view. It's not clear to me what this is all about, as I had just been given the green light with all the other cars. I dutifully press the button and wait. Nothing happens. At some point a coach comes out of the tunnel at walking speed. OK, you don't want to meet it in there. After that, nothing happens for a long time. In an eternally long wait, I cool down completely in the constant rain, until suddenly a red-green weakness overcomes me. There's nothing you can do about it, and after a few seconds you're through the completely empty tunnel. A little further up, the oncoming vehicles wait at their red lights. Strange... 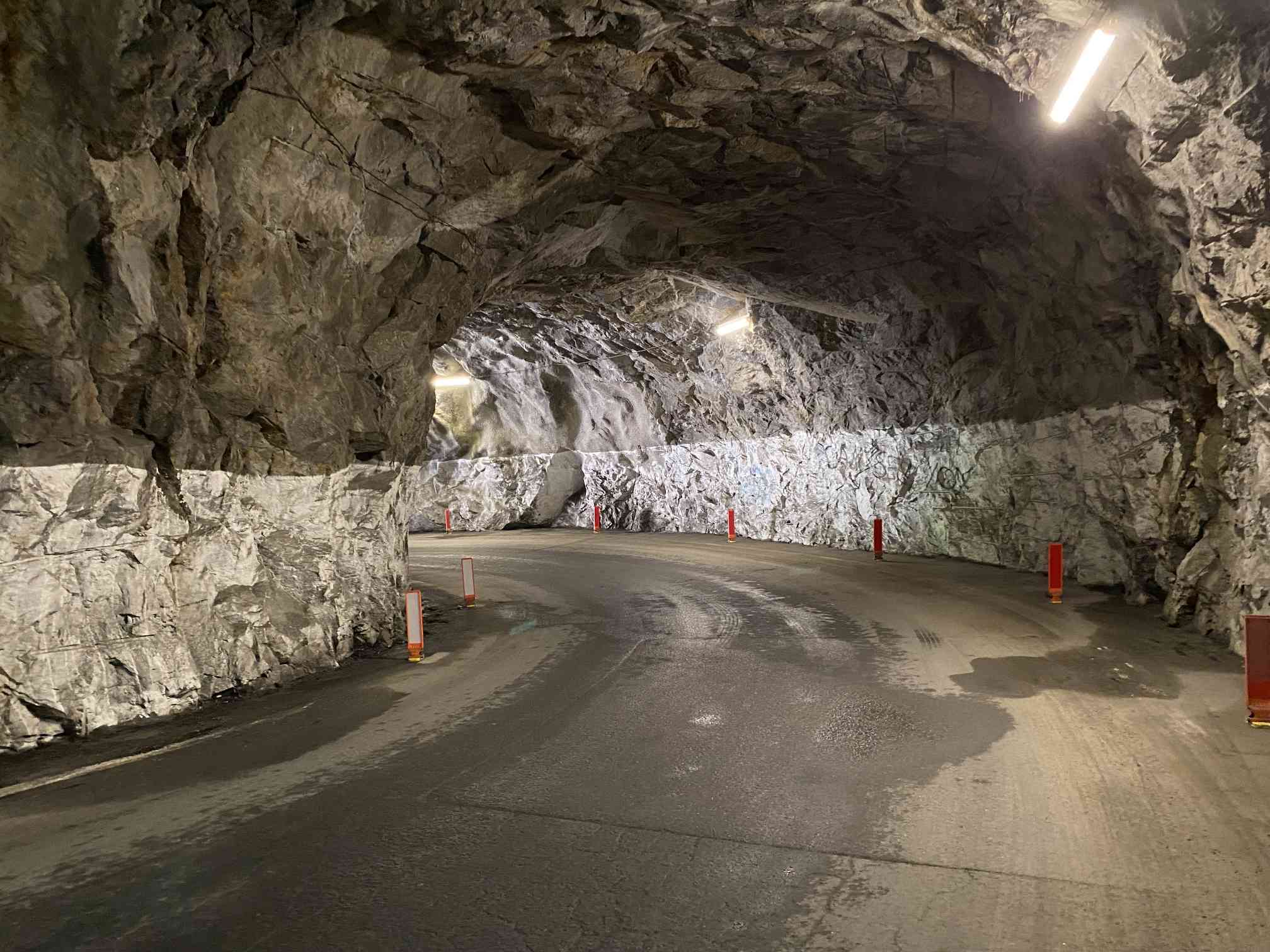 This is what the short tunnel looks like inside (here brightened up by the camera). 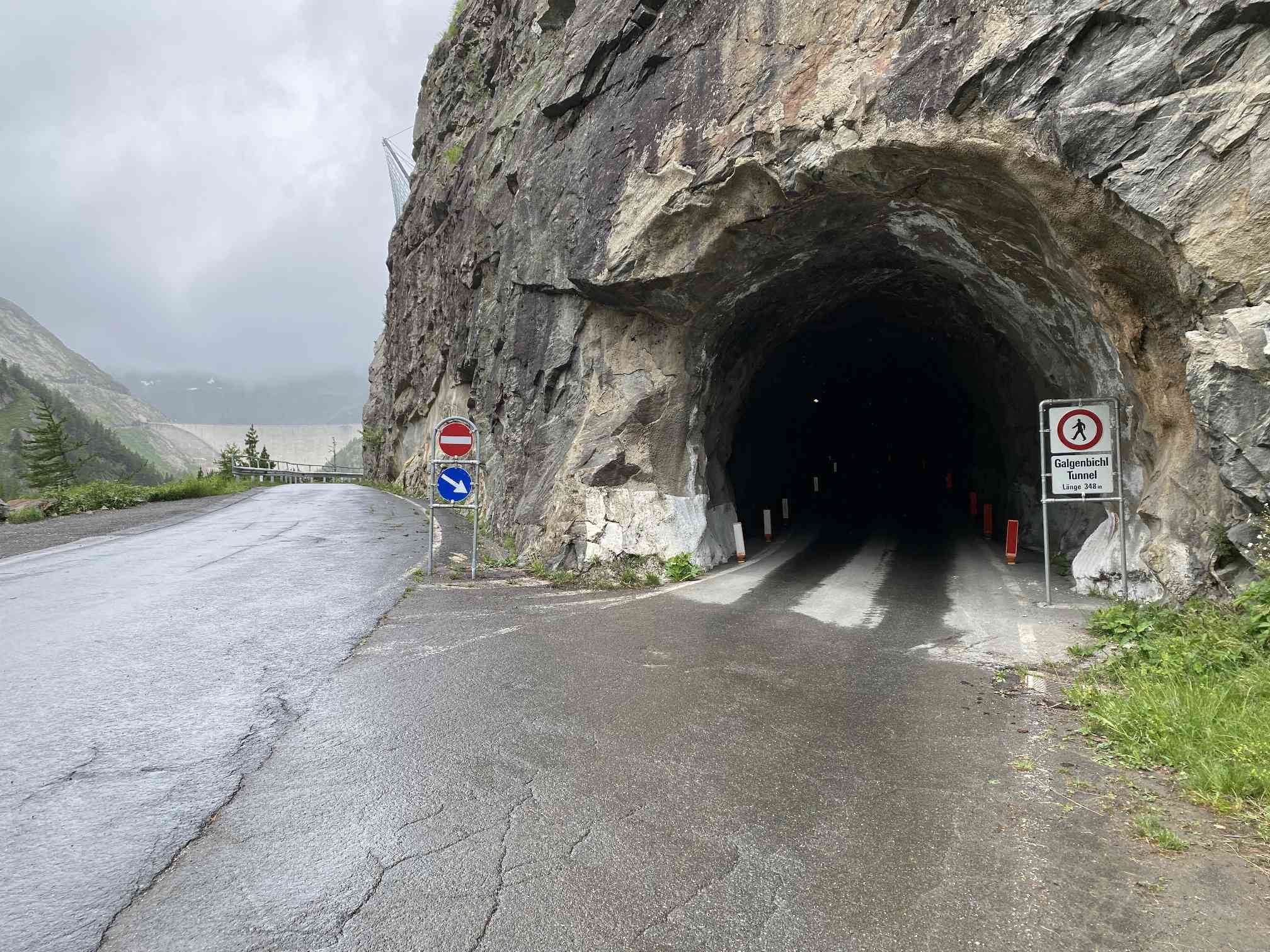 At the back on the left, the dam wall finally appears. I'm annoyed by the constant rain, the dark tunnels, the strange traffic lights and the Porsche/Ferrari groups that roar up the mountain road today. 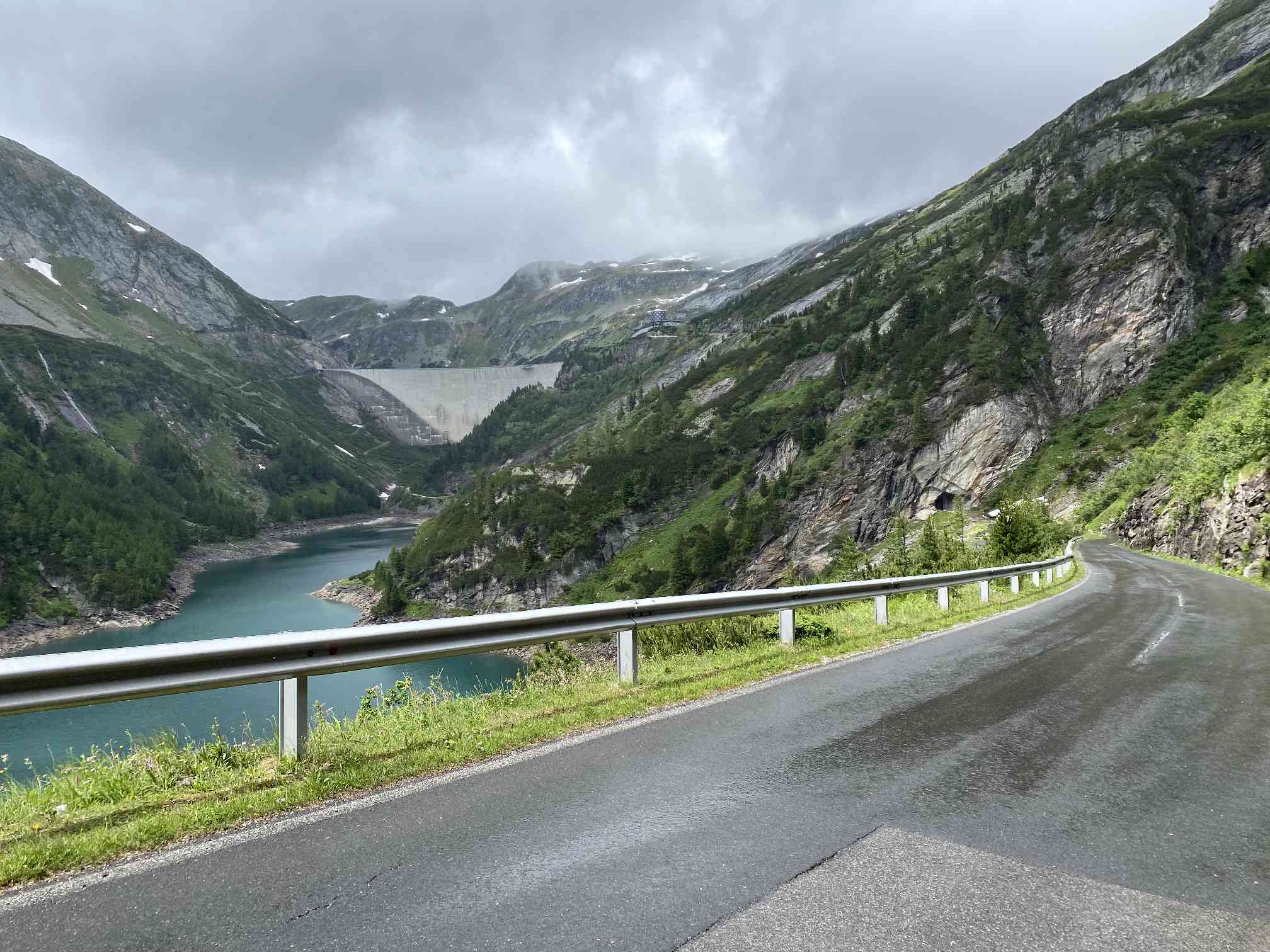 Maybe in better weather it would be nice here. 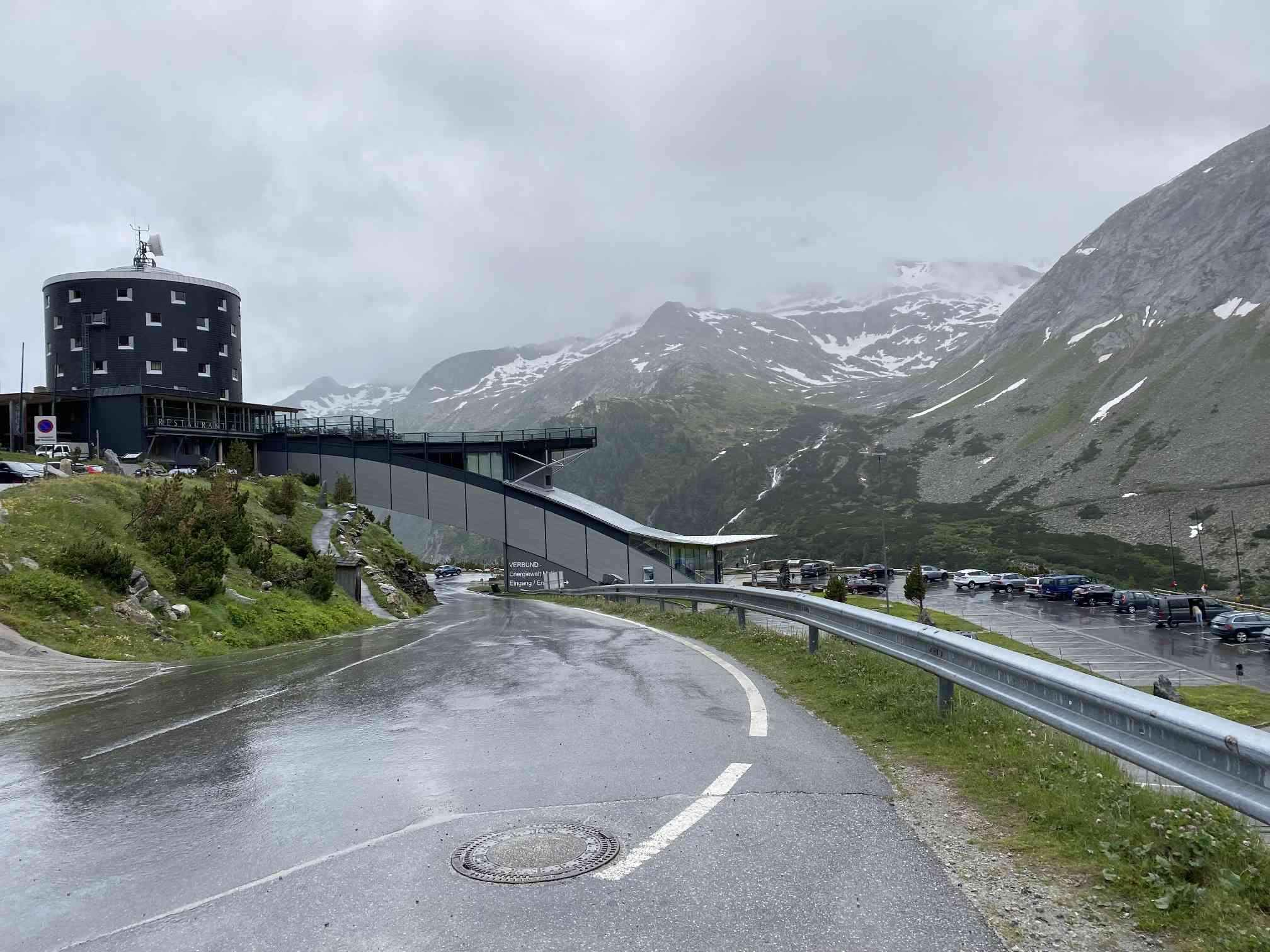 The upper car park is reached. 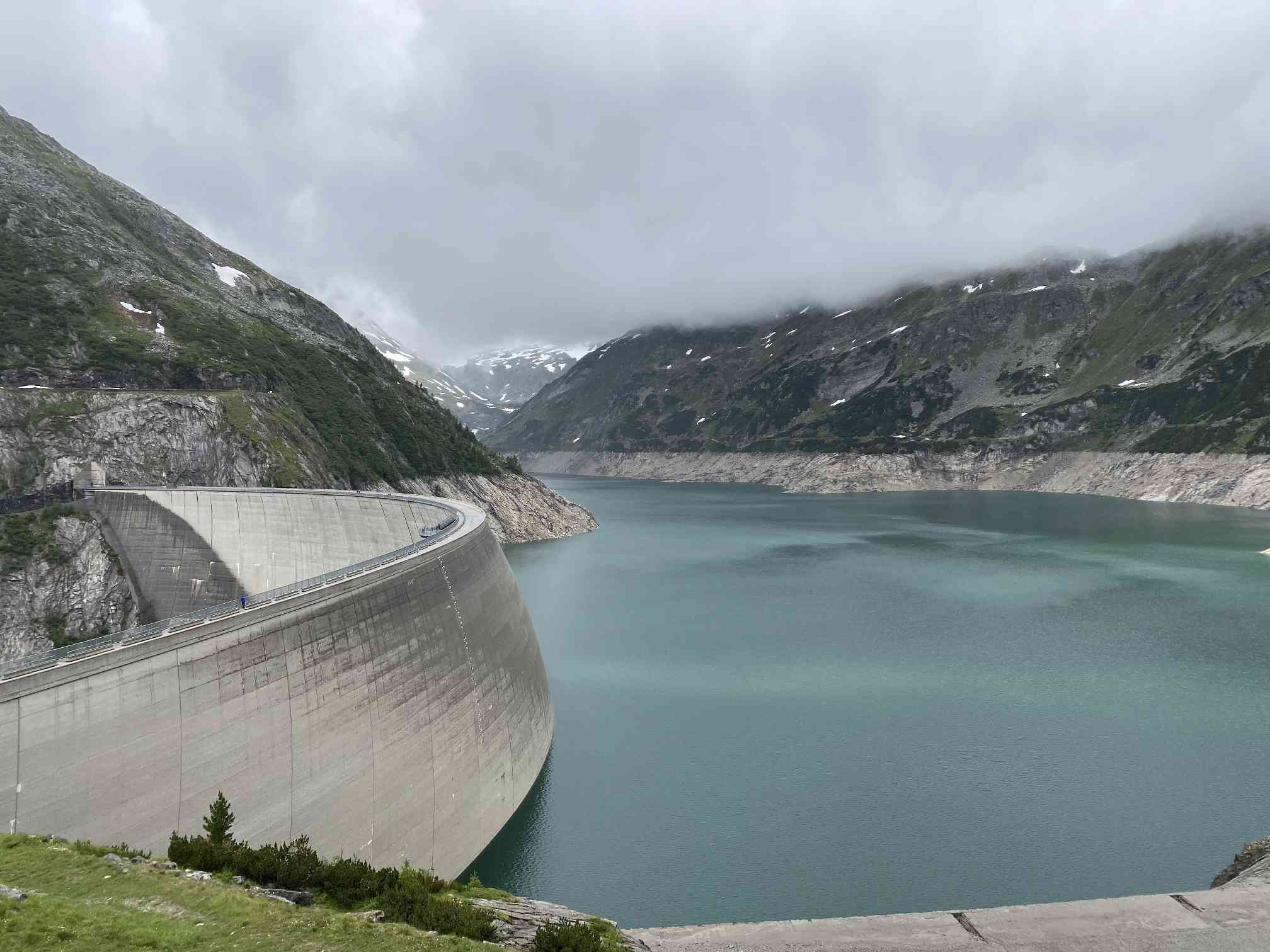 The reservoir with the Kölnbreinsperre from above - looks quite empty. This impression should be confirmed in the coming days at Hochwurtenspeicher and Großsee. They are completely empty during my visits in early July. 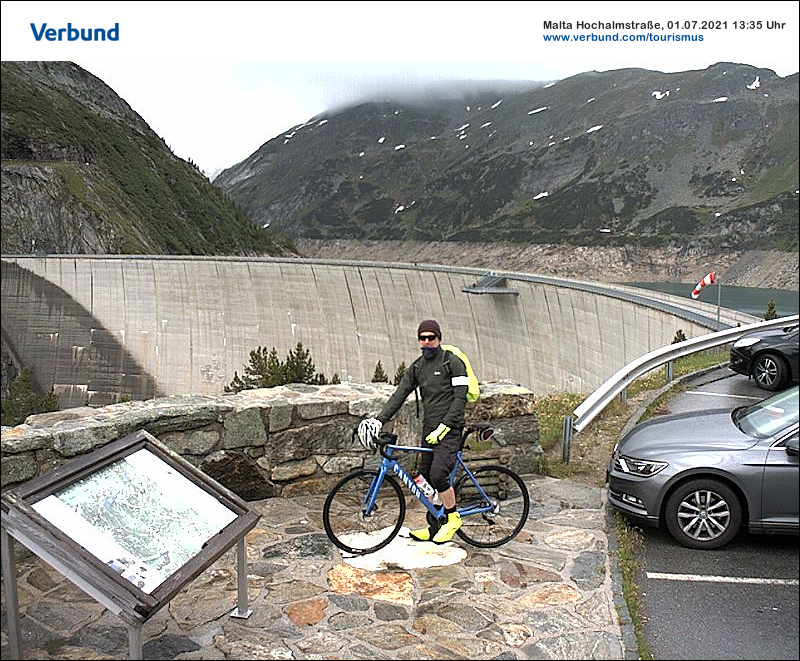 Fun photo spot at the end of the road: picture can afterwards be accessed on the website of the power plant operator.