Mauna Kea volcano is situated on Big Island of Hawai'i and is often named the tallest mountain in the world - provided you also include its 5,000 meters below sea level. Due to the favourable climatic conditions an observatory is located on the summit which consists of several telescopes operated by scientists from many different countries. Thus, there is a public road leading up to the summit which is accessible by bicycle. Mauna Kea Access Road diverts from so-called Saddle Road connecting East and West coast of Big Island. The ascent starts from Hilo at the East coast and stretches over 70 kilometers and 4,200 meters of altitude difference! This climb is supposed to be one of the longest in the world. (However, in Peru you can even ride a 4,818m elevation gain up to Ticlio Pass starting from the Pacific Ocean coast (distance 140km) or up to Punta Olimpica Pass (4,890m / distance 250km))

However, all options cause significant logistical problems: There are only very few facilities on the way, weather conditions at the East coast are often very rainy, there is only some 12 hours of daylight, rented support cars are usually not permitted to drive the Saddle Road, part of the road is unpaved and the body has to challenge an altitude gain of more than 4,000 meters almost without any acclimatisation. The original plan was to ride option 1) but then changed in detail to option 2). But circumstances at site did even not allow to ride this variant. Finally, the shortest alternative 4) was realised. But this last option, however, still becomes a real tour de force due to the steep unpaved ramp and the level of high altitude.

The idea was as follows: Start at the Pacific Ocean in Hilo, followed by a 45 kilomters ride on the Saddle Road up to the peak of the road at an elevation of 2,000 meters. The Mauna Kea State Recreation Area is located after some more 11 kilometers towards the West coast. At weekends you can stay there overnight in simple wooden multi-person cabins, which can be reserved online in advance. However, this option also means to carry large quantities of food and water with you. On the next day there would have been the only possibility to buy some drinks and candy bars at Mauna Kea Visitor Information Station at an altitude of 2,800 meters. But significant health problems upset these plans...

This is the total outline of the 70 kilometers from Hilo at the East coast to the summit. After 45 kilometers the Mauna Kea Access Road diverts from the Saddle Road and the average grade to Mauna Kea Visitor Information Station (2,800m) becomes some 7,3% with peaks up to 17%. Further 1,400 meters of altitude gain follow on the next 14 kilometers (eight of them unpaved) - i.e. 10% average slope! 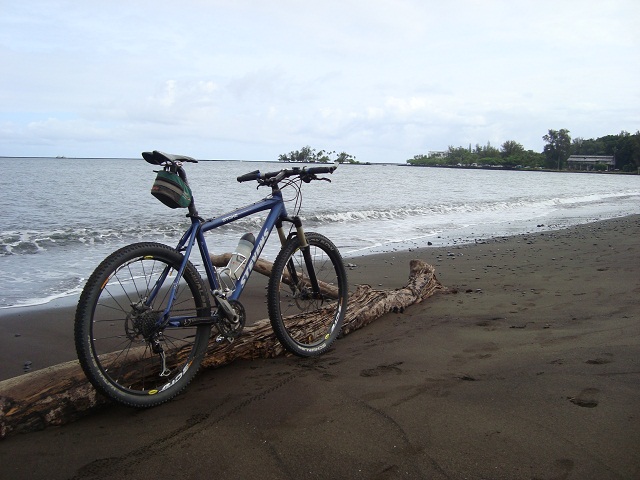 Departure at the Pacific Ocean on sea level. Despite the calm sea the city of Hilo has been hit several times in the past by devastating tsunamis. 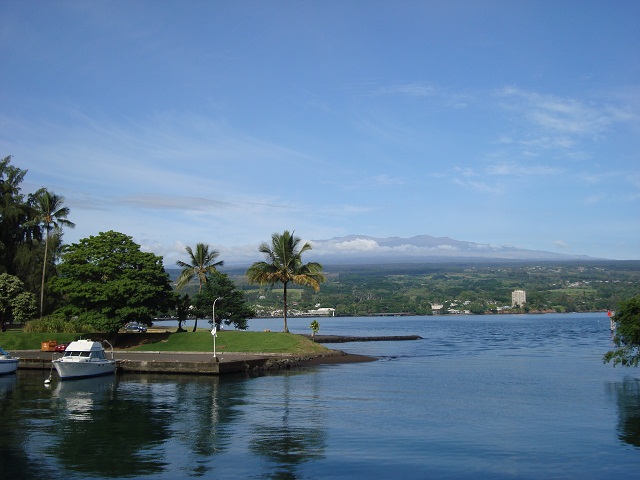 In the background the Mauna Kea volcano. The tiny white spots on the summit are the observatories. 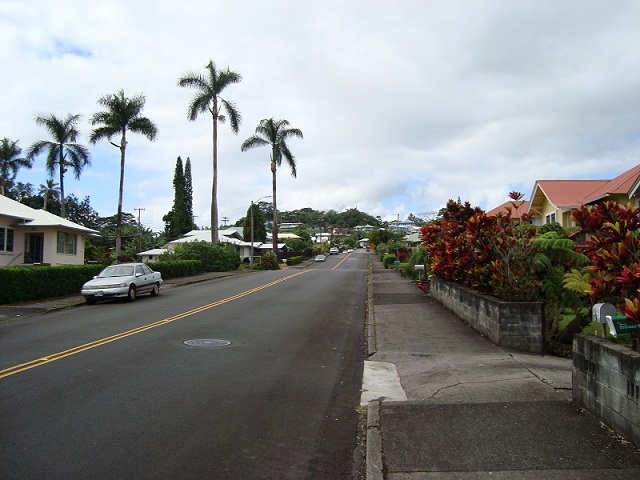 Start of the ascent in Hilo 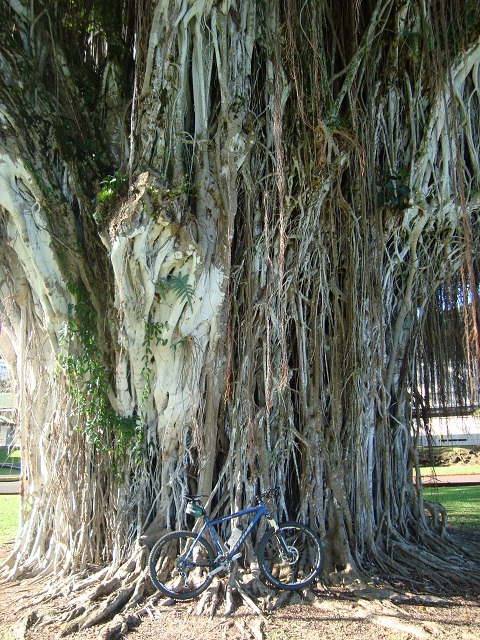 Impressive banyan trees alongside the road 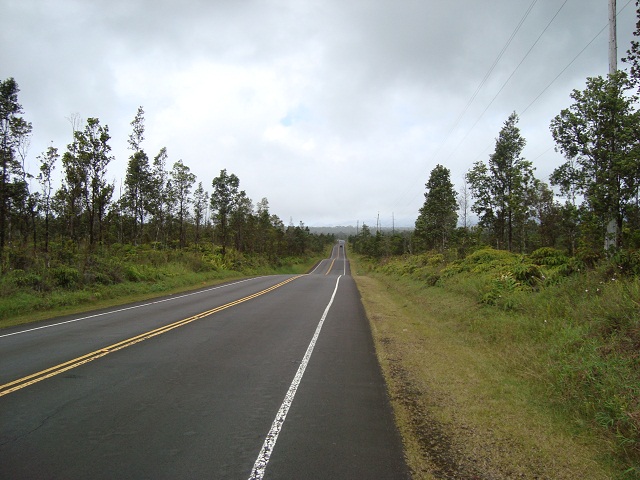 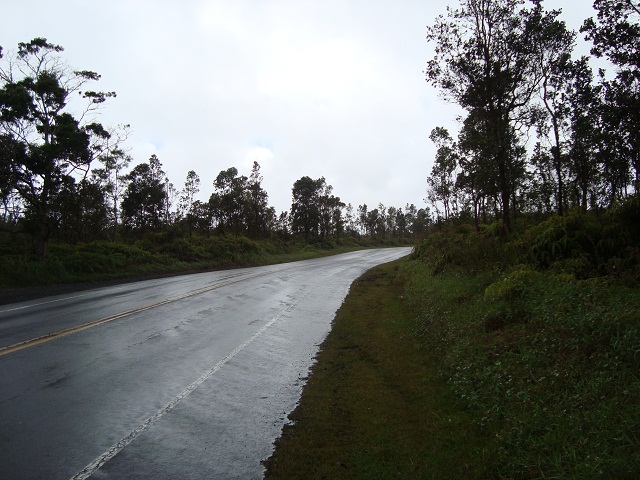 After a 20 hours flight from Europe my dislocated back causes considerable problems while riding (my doctor will call this later a "spinal breast-blockade with an articular dysfunction" - ouch!). Due to the (too) heavy backpack with all the food and drinks the ride becomes a torture - actually I need a physiotherapist. After some 18 kilometers and at an elevation of almost 1,000 meters a.s.l. heavy pain and additional rainfall force me to surrender for today. Several months of planning for the birds - disappointed and frustrated I return to the hotel.

After three days of recovery I feel fit for a new attempt. However, the overnight option 2) only works on weekends and also requires a reservation at least seven days in advance. Thus, only the shortened options 3) and 4) are still feasible. And as it is usually not permitted to drive a rental car on your own on Saddle Road I have to arrange for an expensive taxi transfer early in the morning to MKVIS. 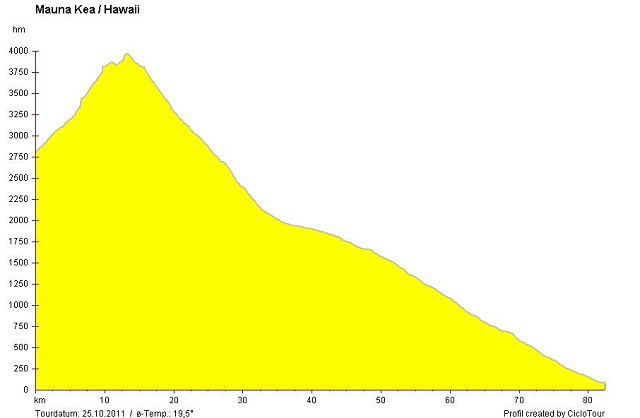 The outline shows the 14 kilometers of the uphill climb and the subsequent descent ride of almost 70 kilometers down to Hilo. If you know Ötztal Glacier Road you may have a feeling for the distance and slope of this climb - but this Mauna Kea runway is mostly unpaved and begins at an altitude level where respective Glacier Road terminates... 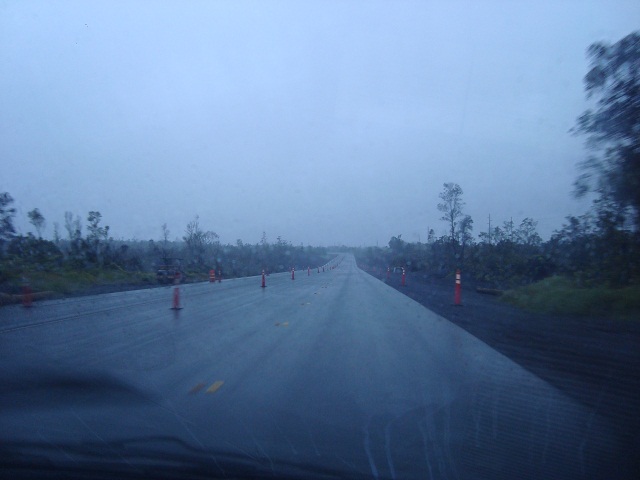 Clouds coming from the sea usually stick at the two 4,000 meters volcanoes Mauna Kea and Mauna Loa. Therefore the weather at the East coast is often very rainy while the Eastern side (where legendary Ironman Hawai'i takes place every year) stays dry and warm. Accordingly, today's taxi drive starts again in pouring rain... 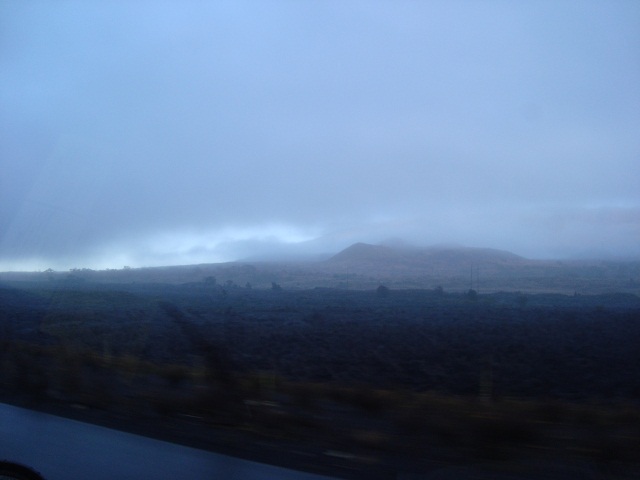 Only at the peak of Saddle Road at an altitude of 2,000 meters a.s.l. clouds break out and provide a first glance at Maune Kea mountain. 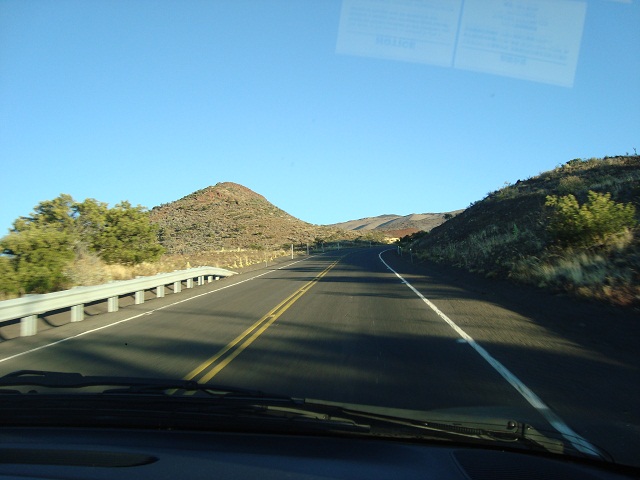 We try to escape the rain and drive further up towards Visitor Information Station. After only a few hundred meters on Mauna Kea Access Road (= John A. Burns Way) all clouds suddenly disappear and weather conditions become very dry and sunny.

At the Visitor Station all vehicles are obliged for a pause. This gives all occupants the opportunity to get used to the high elevation and to receive information about the significant dangers in high altitude. 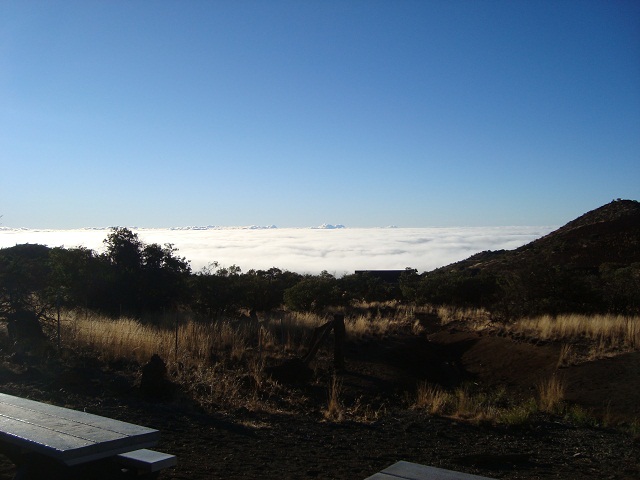 As an altitude gain of 2,800 meters within only one hour is very demanding for the body I take a rest for the next 90 minutes, send my taxi back to Hilo and enjoy the fantastic view down onto the clouds. 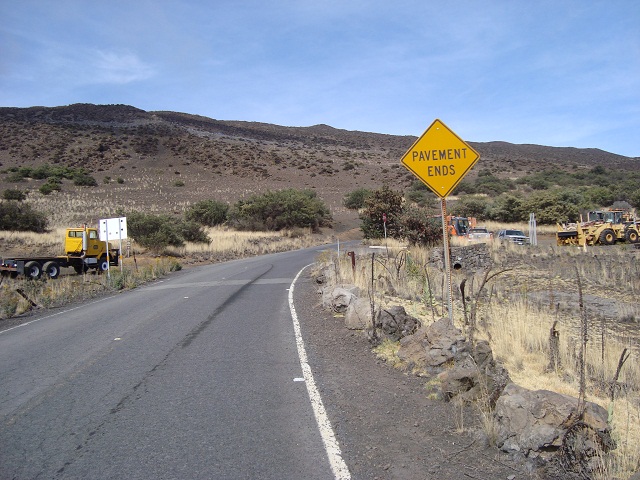 Directly behind MKVIS the unpaved part (eight kilometers) of the runway commences and thus a mountain bike becomes compulsory. 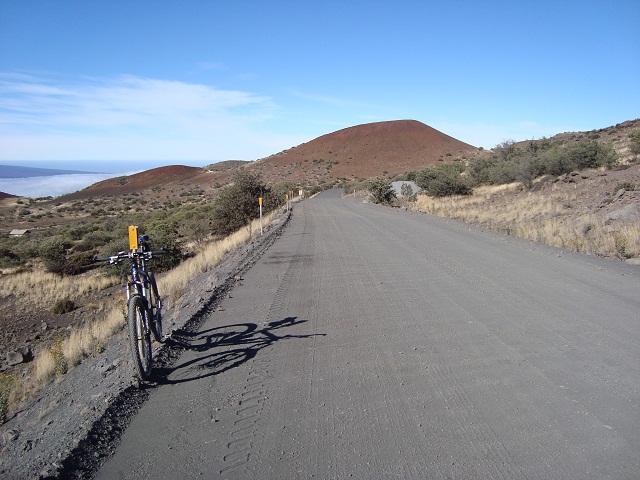 At first the runway appears harmless and the lower part of it even seems to be refurbished recently. However, the road becomes partly very sandy and only a rough gravel track. 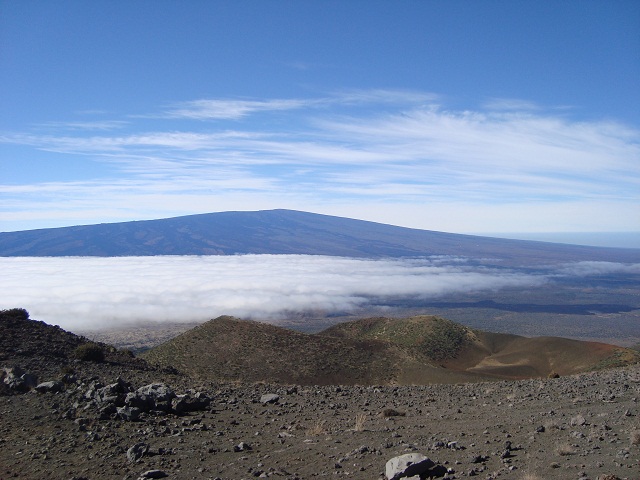 This image shows opposite volcano Mauna Loa and the clouds from the East coast which hardly manage to reach the other part of the island. Thus, the Western part of Big Island stays free of clouds... 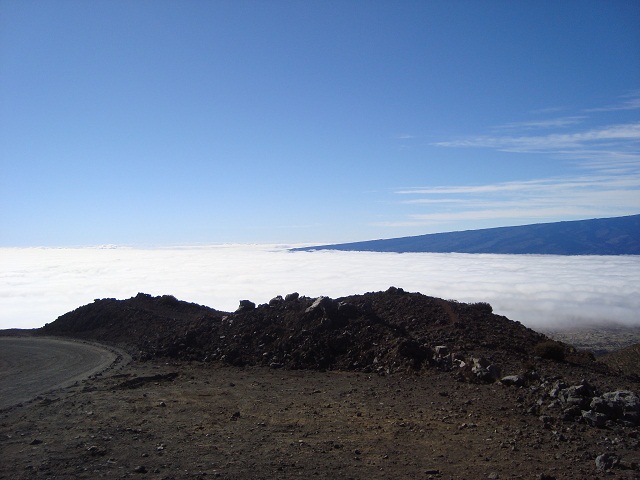 ...while the Eastern part stays below the rain-laden cloud cover.

A large area of the volcano is a "Natural Area Reserve". A trip from the Pacific to the summit of Mauna Kea passes through eleven of thirteen climate zones known on earth! 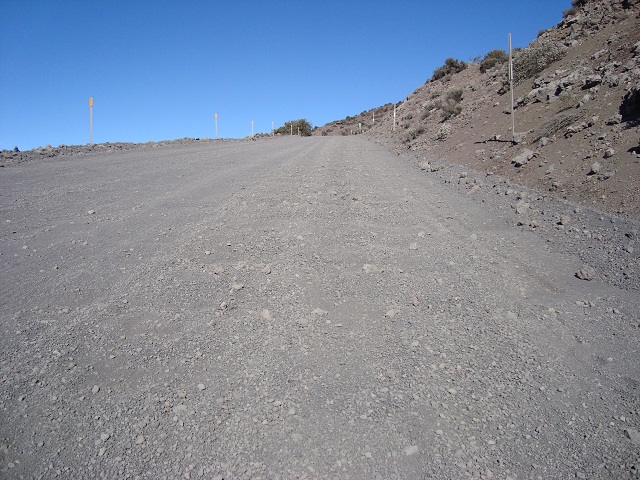 At the steepest ramps with significant slopes of more than 10% a continous riding is hardly possible as the tires slip though the loose sand. Without tires of a mountain bike there would be no chance to ride this section. I get increasingly annoyed as some parts are definitely not rideable today (October 2011). 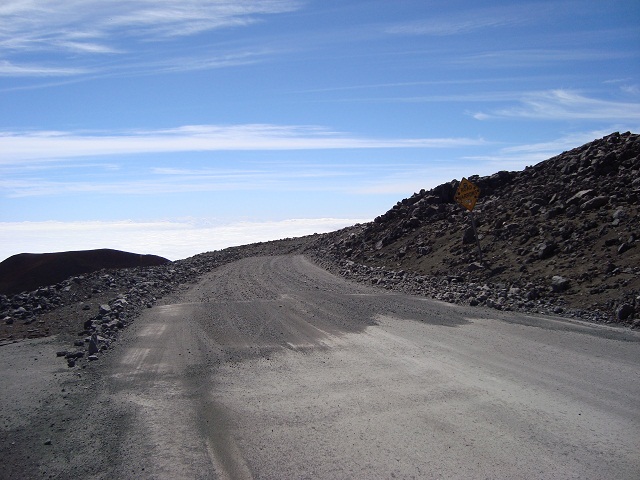 At about 3,500 meters a.s.l. and after eight endless kilometers the paved part of the road begins and leads up to the summit. But now the next serious problem becomes noticeable: The high altitude with its lack of oxygen and the far too rapid ascent from sea level! 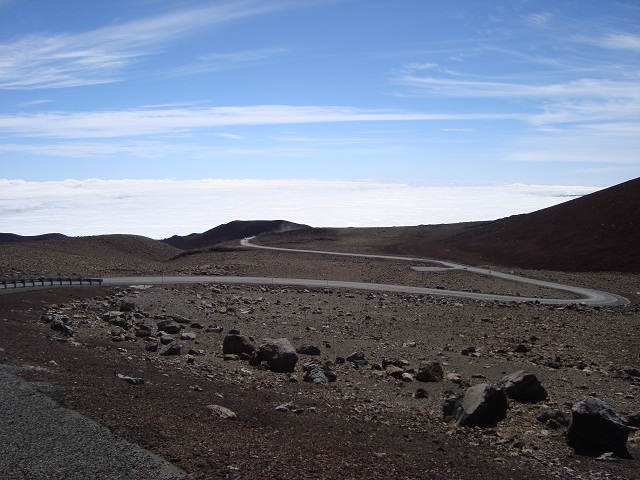 The road winds through the inhospitable stone desert to the top (this is the view back). The slope has in its peaks now well more than 10%. At home in the European Alps such an ascent strains oneself but is still feasible. But at this elevation the ride becomes a creeping agony. I am short of breath and slow down significantly. Additionally, the twisted back causes severe pain. 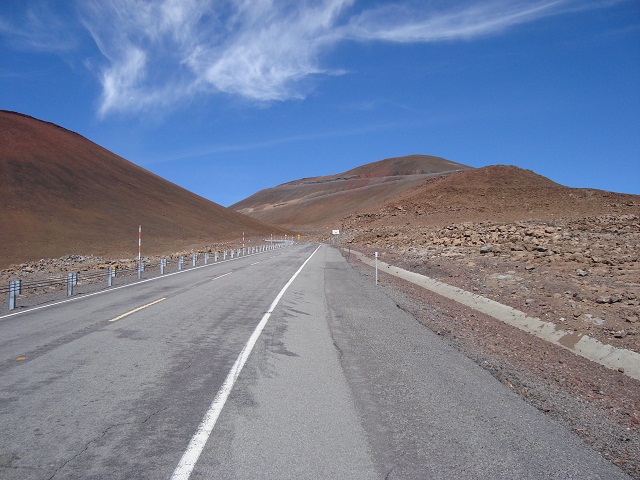 Ahead in the center of the image is the summit of Mauna Kea and the ramp up there. Meanwhile throbbing headache accompanies the trip and in wavy lines I occasionally hit the beam barrier (where available). Quite interesting such a self-experiment without acclimatisation...

After some 13 kilometers of painful riding the observatories appear at last. And hey presto, suddenly it works better! It just seems to be a matter of mind... 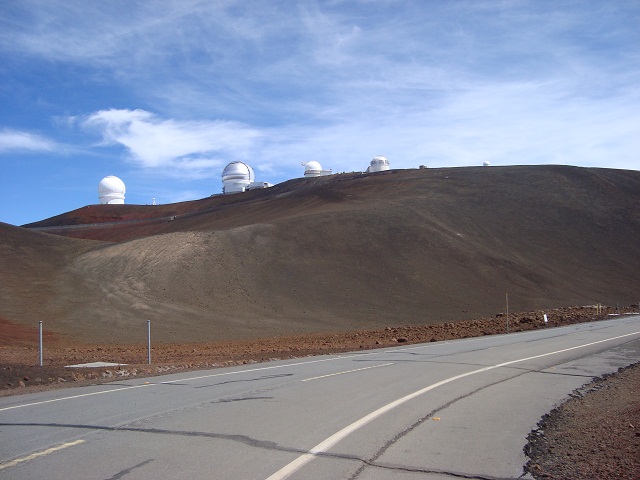 The peak is at the Gemini-Telescope (second from left).

My barometric altimeter indicates an elevation of 4,127 meters above sea level while my GPS even reports 4,216 meters - let's agree on the official 4,200 meters. 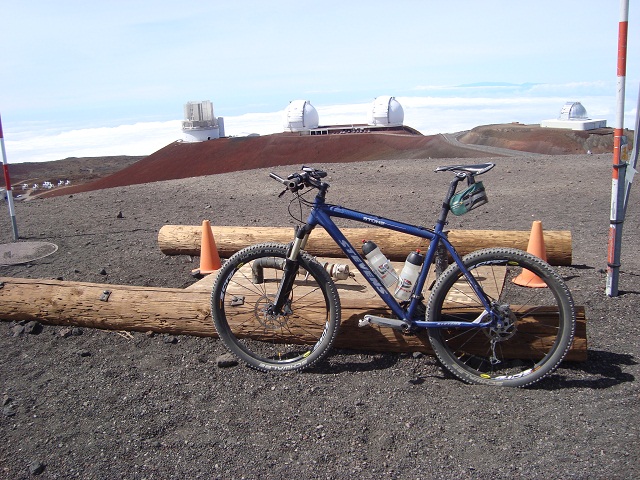 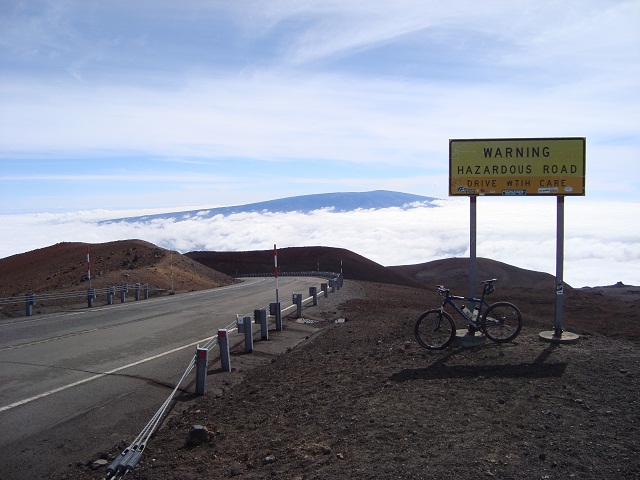 And finally it goes back down the "hazardous road" on one of the longest descents in the world: 70 kilometers to Hilo at the Pacific Ozean! 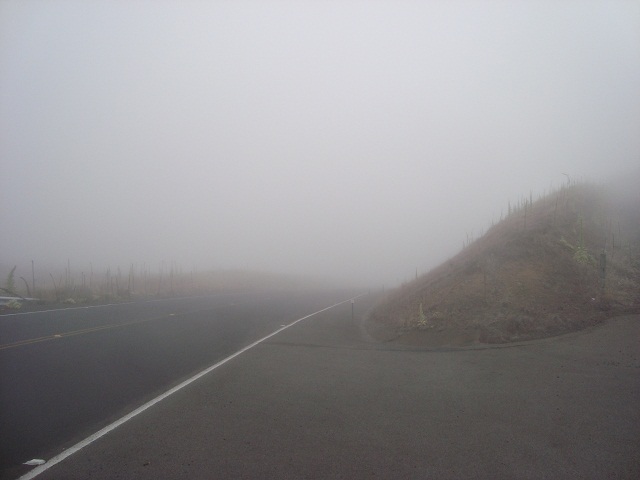 The descent also becomes a real adventure. Shortly behind MKVIS the wall of clouds appears again and pouring rain and very low visibility accompanies the further ride back to Hilo. A pickup truck ahead of me started skidding out of control on the wet road and gently ended in the edge of the lane - luckily no severe damages happened at all.

German beer even on Hawai'i :-)