South America's (and likewise world's) highest rideable road is situated at double-peaked volcano Uturuncu in southwest Bolivia. The roadway leads up to the saddle between the two summits of that mountain and gets to a maximum elevation of 5,768 meters. Until mid of the 1990s there was a sulphur mine on the lower peak at an altitude of some 5,900m which could be accessed via that road. Nowadays the runway is only maintained for touristic purposes by few local guides. There is no other runway on the Bolivian Altiplano, in the Chilean Atacama desert or even in the Himalayas where cyclists can get higher (see information on the highest cyclable mountain roads of each of the continents). 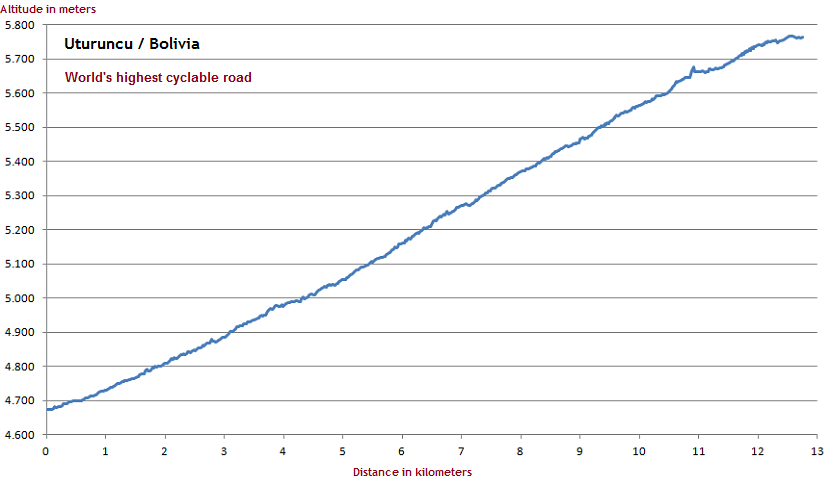 Average gradient on the first five kilometers is some 8%, increases to more than 10% between 5,100 and 5,600 meters and finally lowers in the upper part of the road. 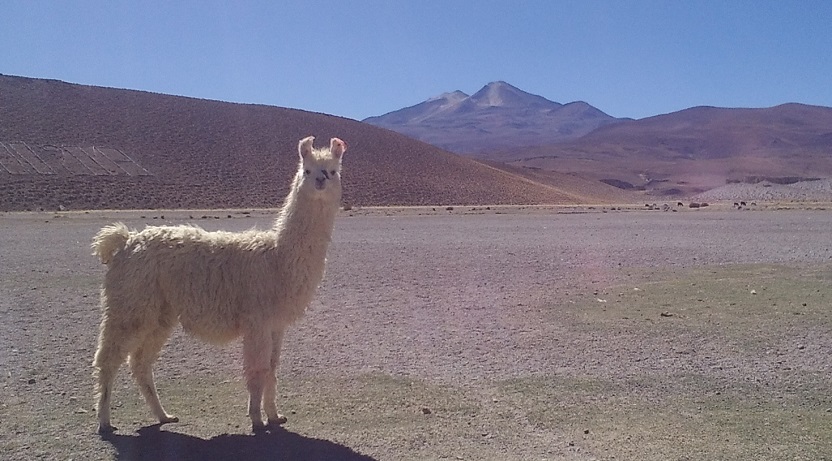 This is the view from Quetena Chico to Uturuncu volcano in the background. The higher right-hand peak reaches an elevation of more than 6,000 meters. The road leads directly into the mountain saddle between the two summits. 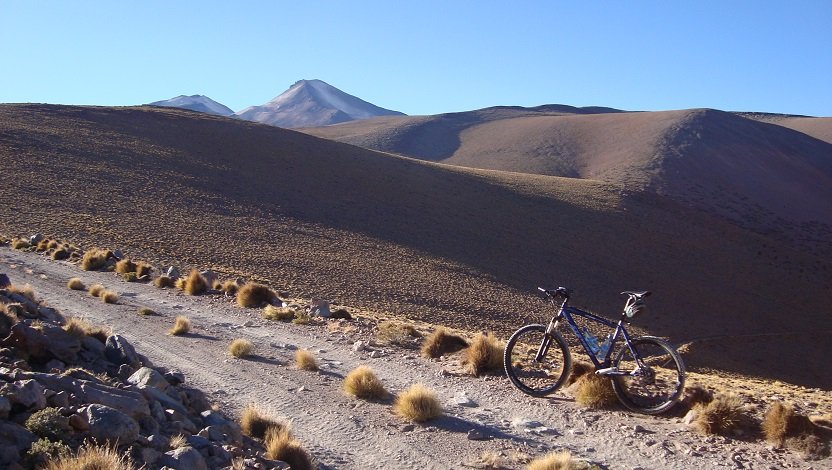 After two weeks of acclimatisation a support car gets us in the very early morning with freezing cold temperatures up to the first mountain ridge of the volcano at some 4,670m. This is actually the zero point of the ride. 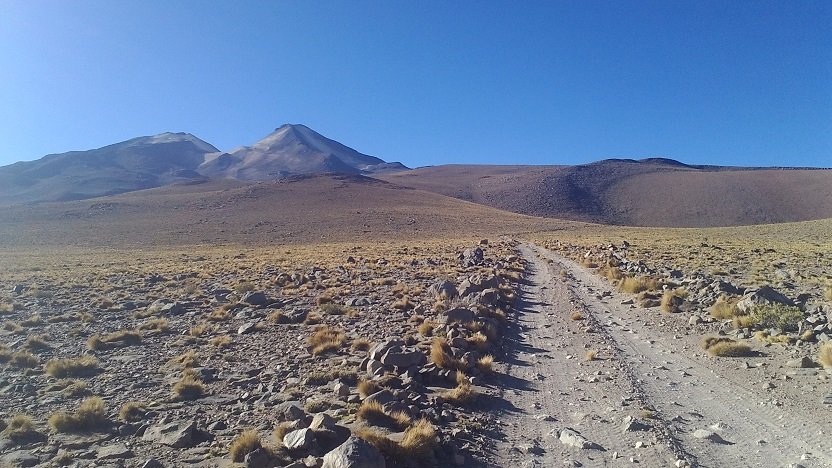 The way starts quite unoffending and is rather good rideable in its lower part. Uturuncu is a dormant giant being classified as one of only seven super-volcanoes in the world. Geologists believe a huge magma basin of 70 kilometers diameter below the mountain and expect the volcano to burst anytime in the future causing a massive impact on the world's climate. The whole mountain massif raises some centimeters every year... 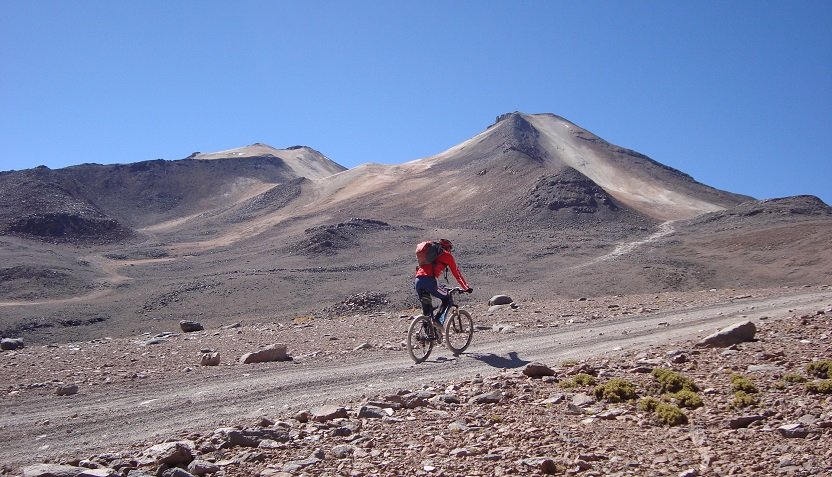 After half of the distance further route becomes imaginable: The road leads from the right beneath the main peak across the light sulphur field over the dark boulder area and finally diagonally in the direction of the lower summit right into the mountain saddle. 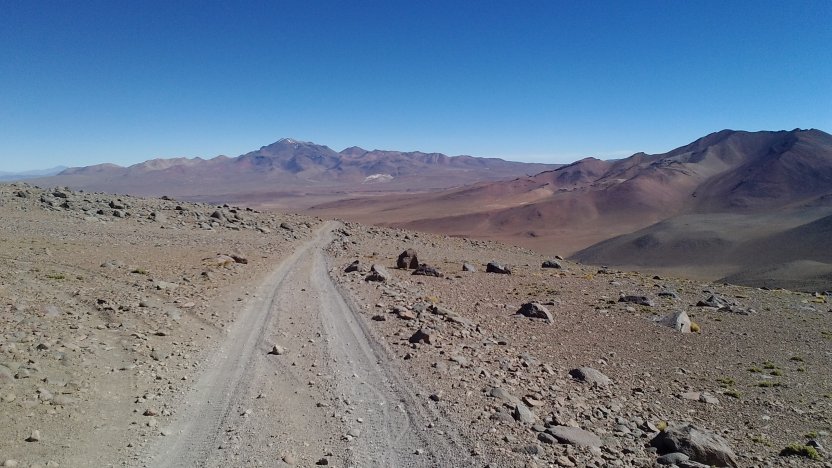 The roadway is very sandy in its lower part and in an altitude of more than 5,000 meters the lack of oxygen becomes a very severe problem. Today's runway is a brute opponent and little driving mistakes cause the tires to slip in the loose sand. The pulse is much higher than it uses to be in lower native altitudes and it quickens to anaerorobic respiration when trying to get back onto the bicycle seat. 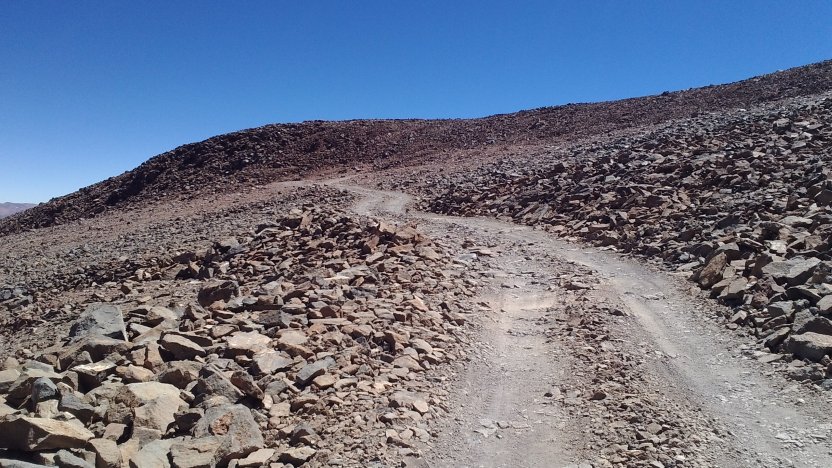 The way becomes a painful challenge. In this elevation of more than 5,000m the partial pressure of oxygen amounts to only half of that on sea level. A 10%-slope is actually hardly rideable in this altitude. You gasp for breath and feel like being held by an invisible power. 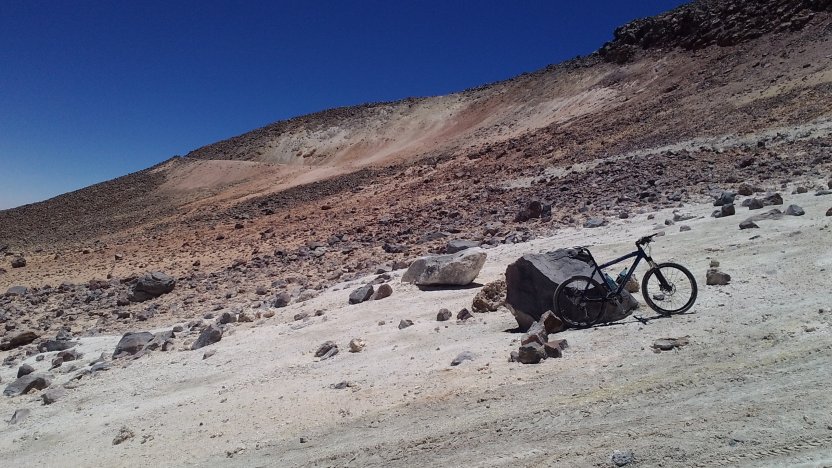 The surface of the way is actually cyclable if you rode it 3,000 meters lower in the European Alps. However, the body is not capable to do so right here. It is more bike pushing than bicycling: Between 5,200m and 5,600m I have to push most parts of the route. But a chocolate bar from home and a photograph of my smiling daughter on the handlebar motiviate to proceed the ride. 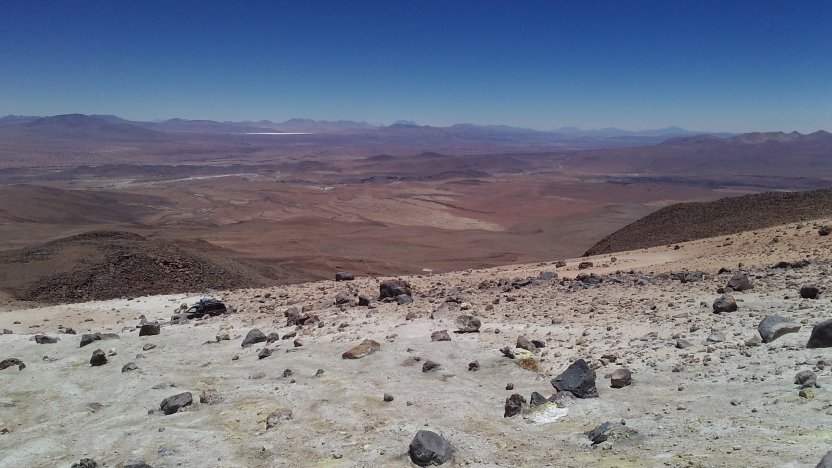 The sulphur area below the main summit reveals that Uturuncu is still an active volcano. The worm pieces of rock spread a nasty smell of rotten eggs or black powder. However, there is an amazing view down to the Bolivian Altiplano. 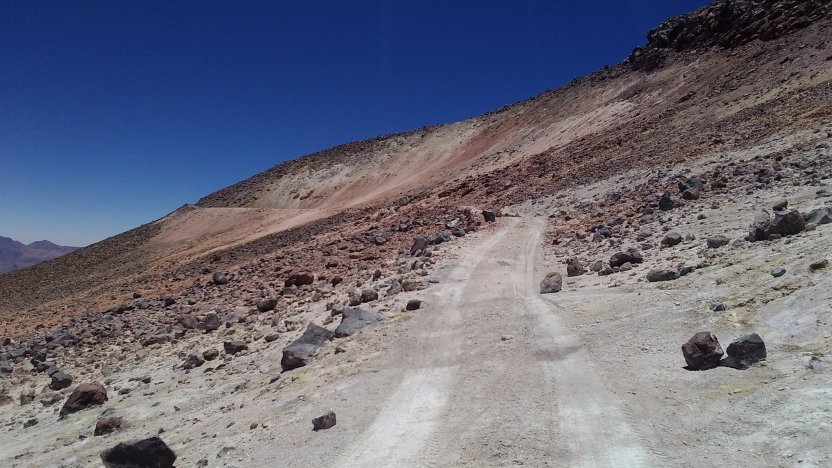 After many kilometers of painful agony the gradient finally decreases and the runway turns cyclable again.

At the crossover from the sulphur field the lane narrows considerably and the way becomes very stony and partly rocky. This is one of the few sections that would hardly be rideable in the Alps as well. 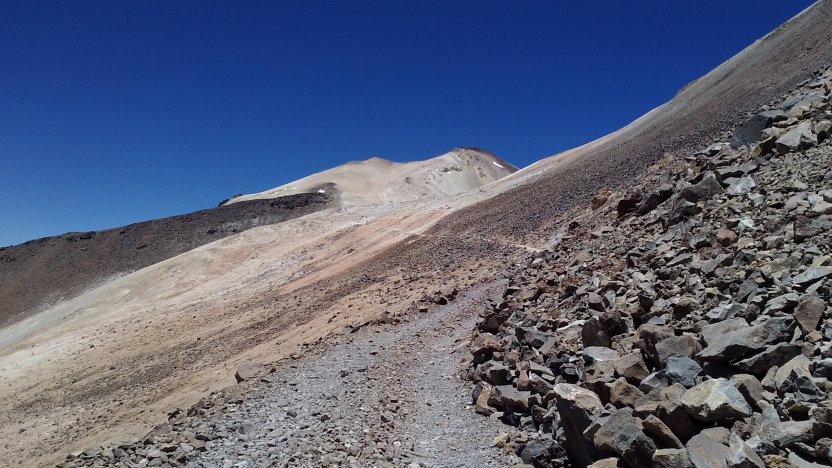 The way winds up in the direction of the lower summit. The old sulphur mine was located at some 5,900 meters behind the black boulder area left of the small fields of old snow. 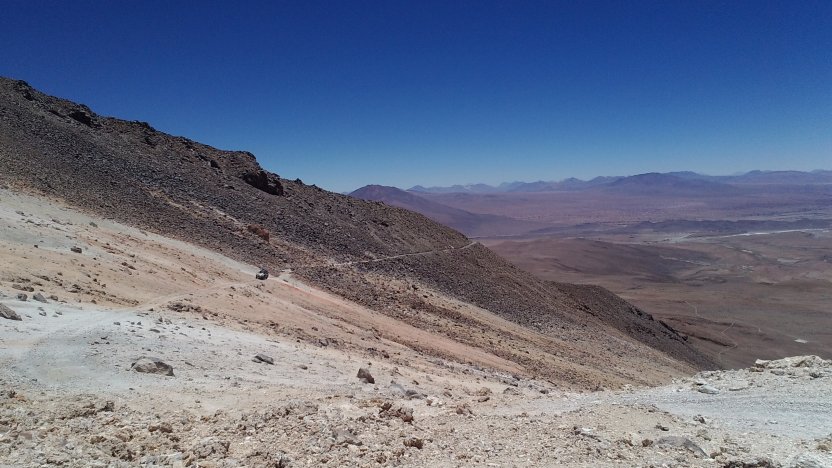 View back to my support car whichs always stays in sighting distance. The Bolivian driver used to work for many years in several mines in the Bolivian/Chilean border area and he knows the way up to Uturuncu very exactly. He is one of the very few natives managing to drive the Uturuncu mine road all to the top. Other cars getting hikers to the volcano usually stop at a considerably lower parking area (the bright spot at the very down right of the road). 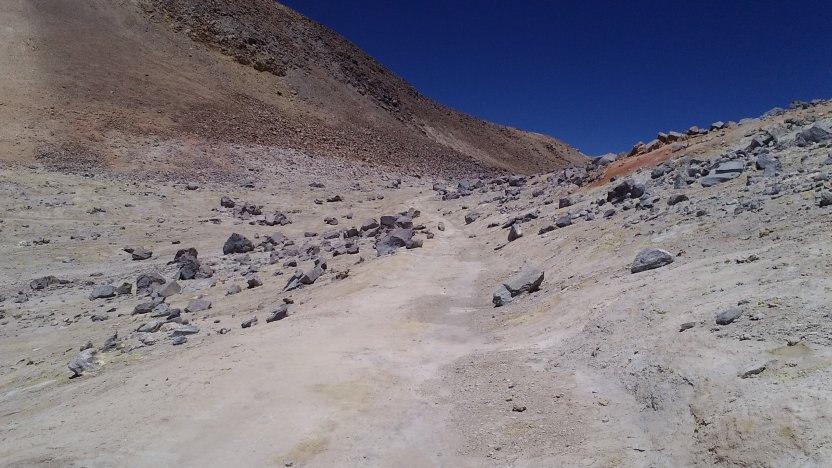 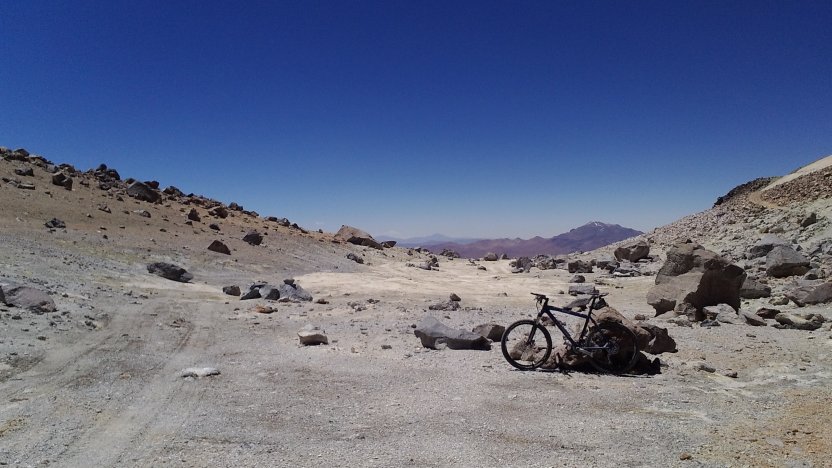 On the Uturuncu saddle two GPS devices indicate 5,768m and 5,770m, respectively. Google Maps also confirms 5,768m for coordinates lat -22,263784, long -67,181207 and Google Earth even reports 5,775m at this spot. In the very right back the further way up to the lower summit and the old sulphur mine is visible (the way can also be identified on the above satellite image). 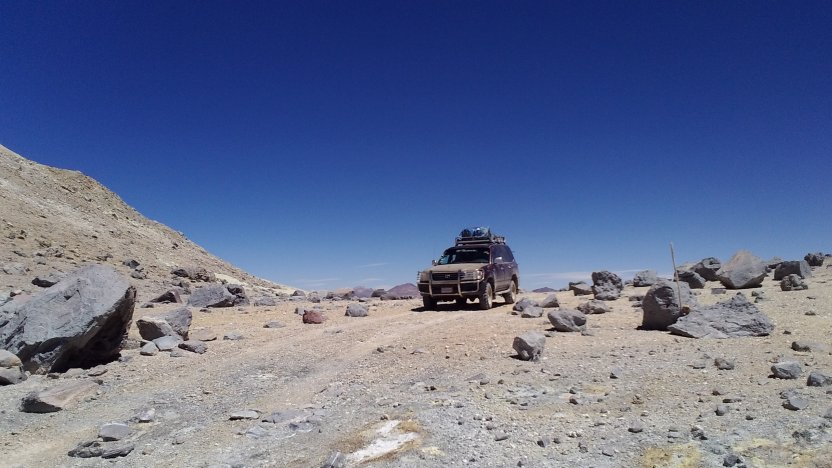 Even the support car gets to the saddle and proves that the way is (contrary to several travelogues) not blocked by landslides but actually even motorable in November 2013. 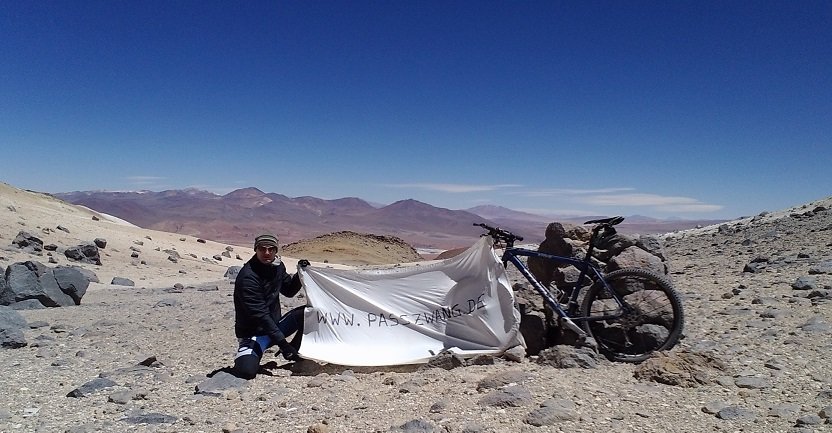 The southern end of the Cordillera de Lipez with Cerro Zapaleri in the background marking the border to Argentina and Chile.

Conclusion
There are three essential requirements to cycle Uturuncu successfully: Acclimatisation, acclimatisation and again acclimatisation. In addition it is advisable to have significant experience with high altitude cycling. However, it is still worth to be discussed whether amateur cyclists can actually ride a 10% grade in altitudes above 5,000 meters. More than 90% of the road is technically cyclabe but only quality of acclimatisation determines the extent of the actually rideable part of the way (I had to push at least one-third of the way). However, the ride provides a gorgeous adventure in gigantic scenery of the Bolivian Altiplano with active volcanoes and colorful lagoons.