The Timmelsjoch is one of the classic passroads of the Eastern Alps and connects Austrian Ötz Valley with South Tyrolean Passiria Valley. While the Northern ramp from Austria leads on its last kilometers directly to the pass summit the southern route from Italy is much more interesting. This southern climb winds in several turns on narrow road to the top and forms with its 1,800 meters of altitude gain one of the most challenging passes of the Alps. Southern ramp of Timmelsjoch also constitutes crowning part of the Ötztaler Cycle Marathon.

Northern ascent from Ötz Valley is very diversified and overcomes at first some nice switchbacks until the toll gate at the treeline. Subsequently the scenery changes and a long straight climb follows to the pass summit. 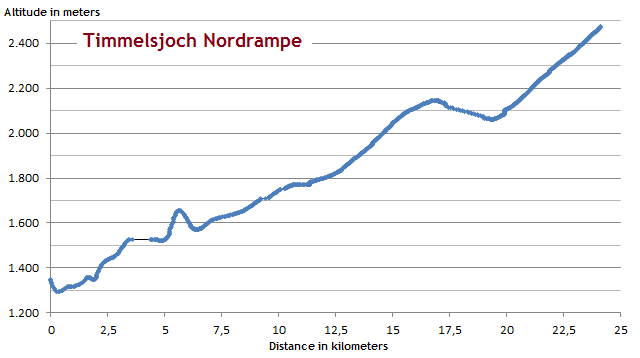 The profile shows the initiall climb to Zwieselstein at five kilometers. Toll gate is situated at an altitude of some 2,100 meters at Hochgurgl. After a short desecent the way proceeds to the pass summit at 2,473m. 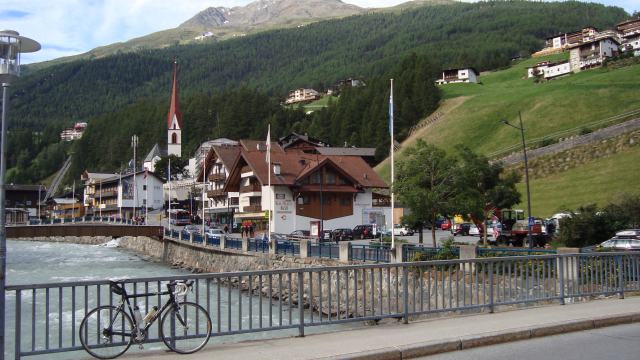 Departure in the center of Sölden 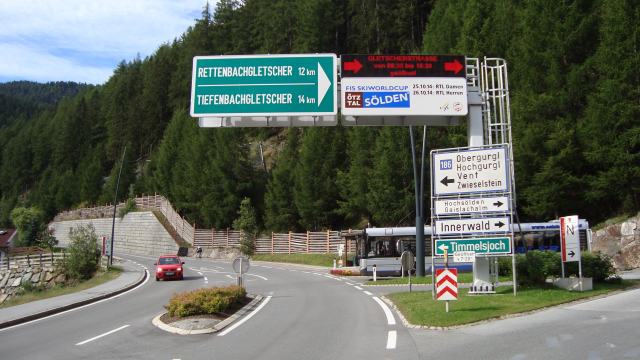 At the end of the village the way diverts to the right to Ötztal Glacier Road and to the left to Timmelsjoch. 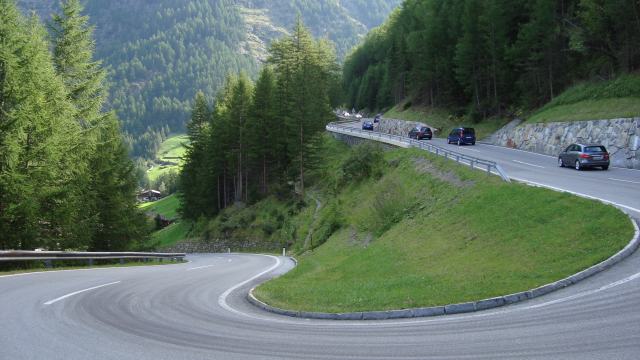 Panoramic scenery of the Ötztal Alps shortly before Obergurgl 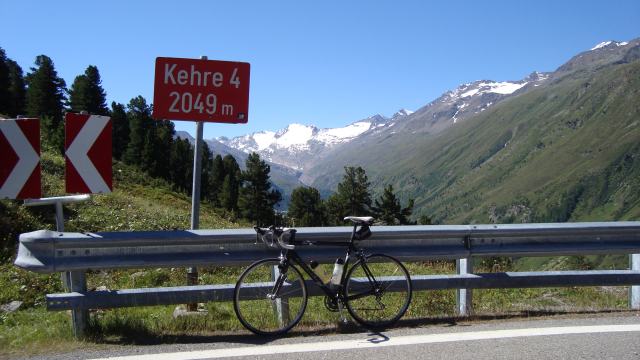 The serpentines are numbered... 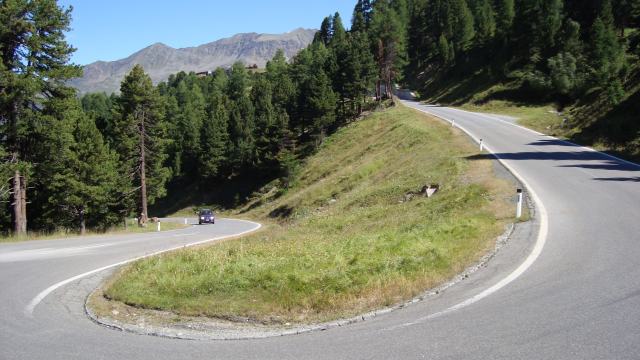 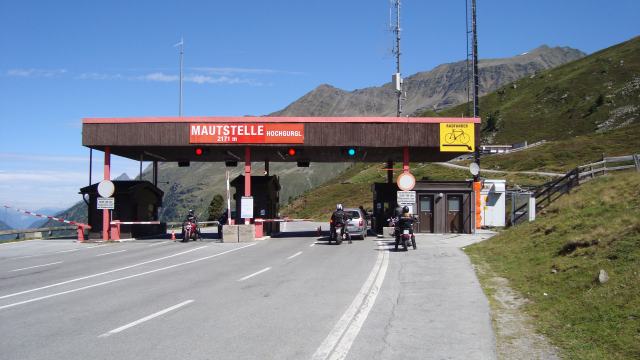 ...the toll gate at 2,171m at the village of Hochgurgl. Cyclists can proceed at the very right without paying a toll charge. 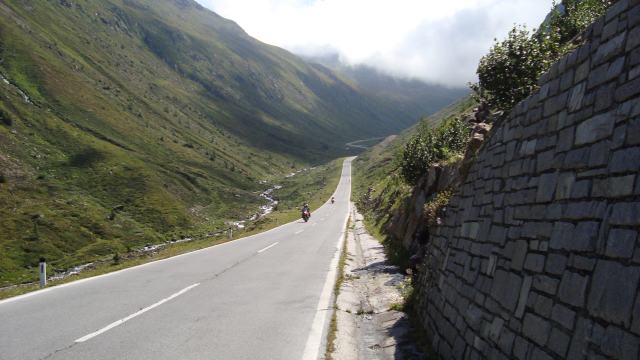 After the toll gate a short descend provides an altitude loss of some 100 meters and a view to the straight long ramp through Timmels Valley. Unfortunately, many motor bikes use this part of the climb as an Autobahn-like road... 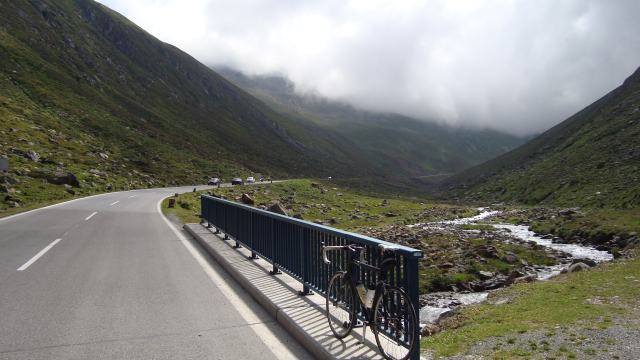 Clouds from the Italian side of the pass cover the rest of the climb providing a freezing cold headwind from above. 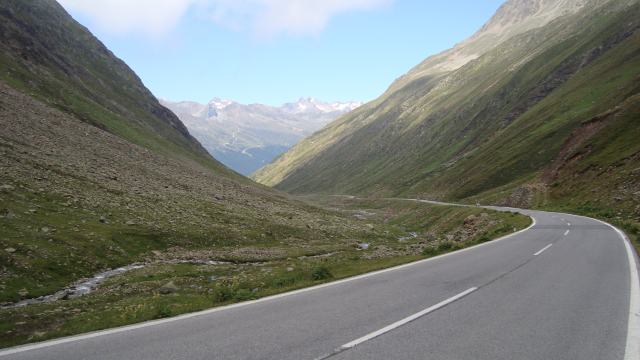 View back to Ötz Valley 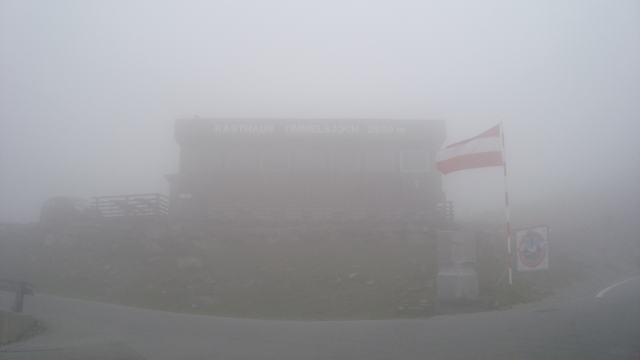 The restaurant on pass summit is hardly visible in the thick clouds. 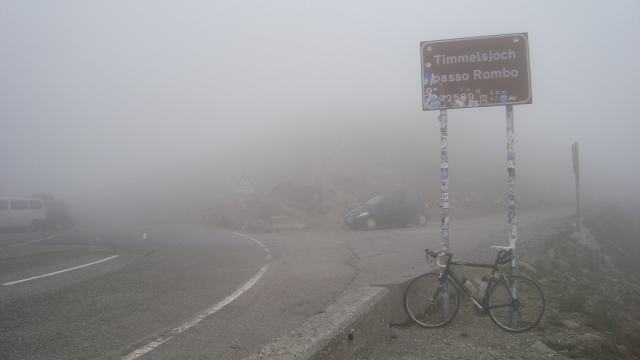 The Italian sign on pass summit indicates an elevation of 2,509m. However, GPS reports 2,473 meters.

Austrian northern approach from Sölden. Paradisiac conditions mid of May 2007 when Timmelsjoch had officially not been opened yet. However, passroad with alongside metres high snow was smoothly rideable with a road bike. While all motorbikes (usually populating Timmelsjoch) had to return at the toll gate, the road bike could just be lifted over the barrier.... 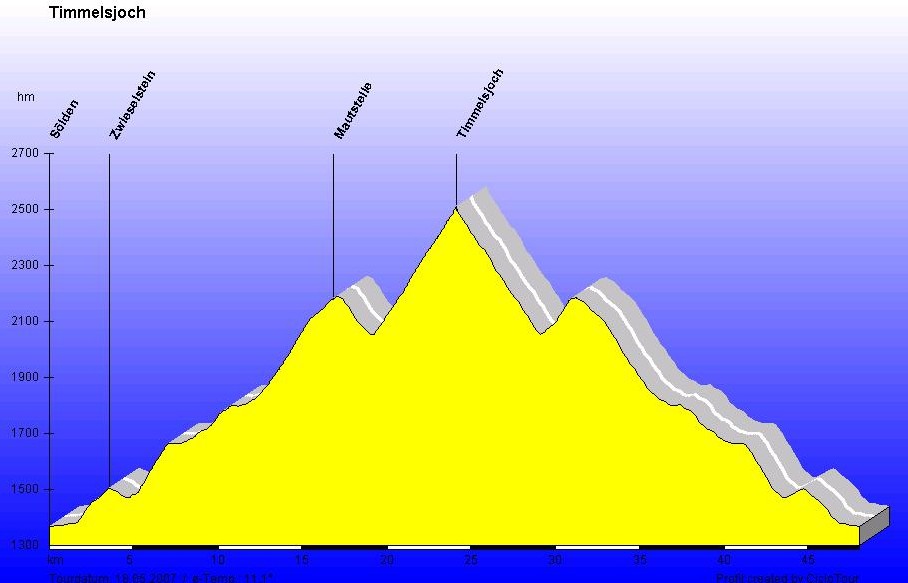 The profile (way to summit and return to Sölden) shows the counter ascent behind the toll gate. 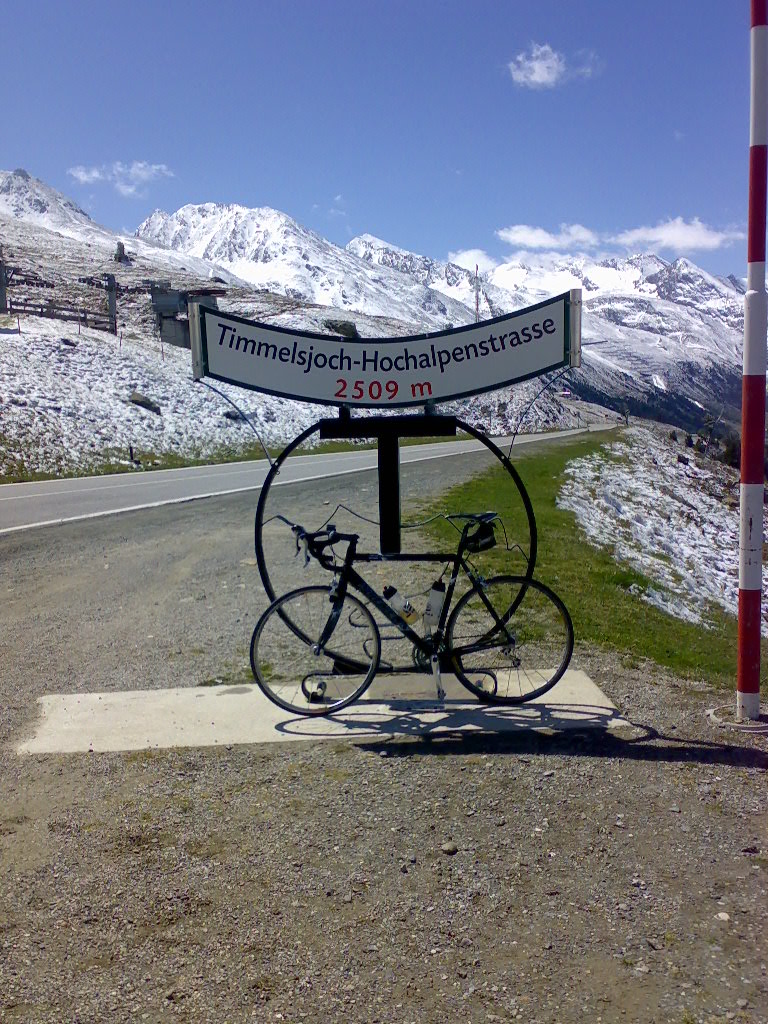 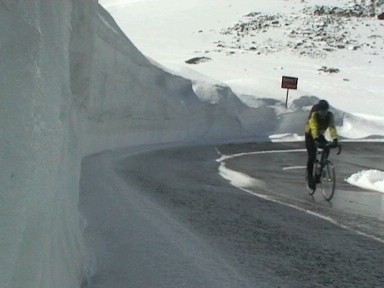 Mid of May somewhat winterly on the last part of the passroad... 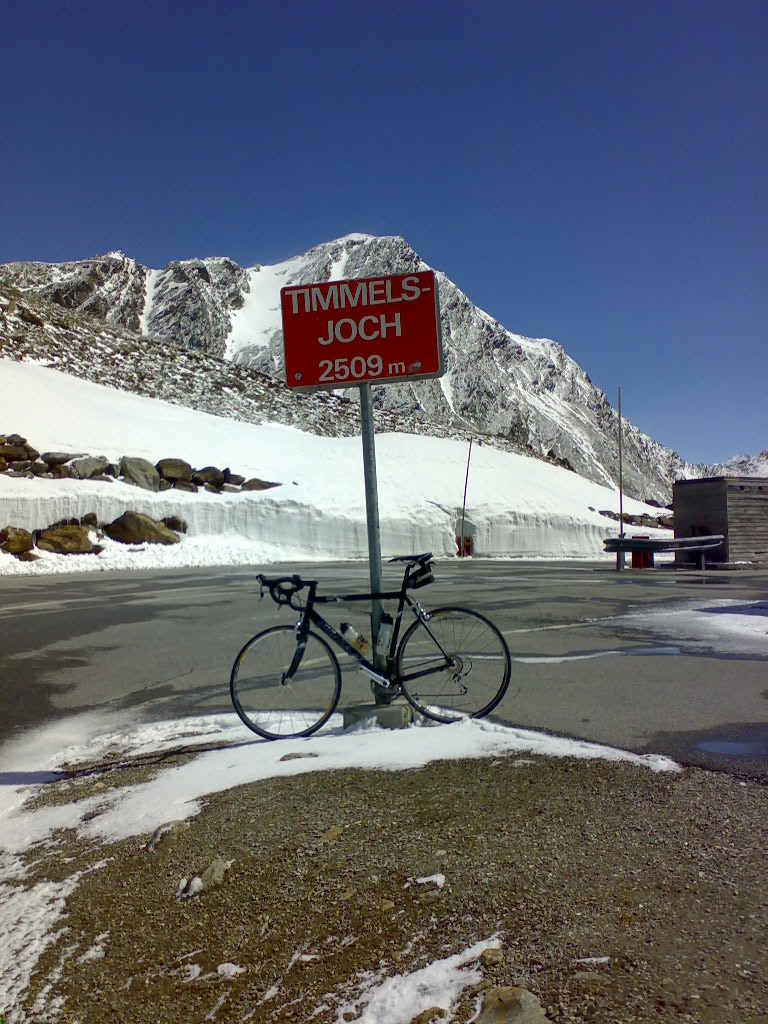 Lonesome idyll on pass summit: No cars, no motorbikes, no coaches full of tourists 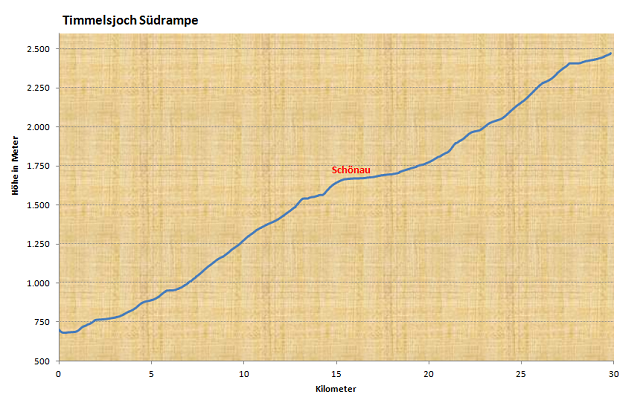 The outline shows the ascent on the first 16 kilometers. After that it becomes more plain for two further kilometers until the "Gasthaus Schönau" at 1,700 meters. Behind this restaurant the steep spectacle begins with its switchbacks to the pass summit. Total slope has moderate 6,1% in average. 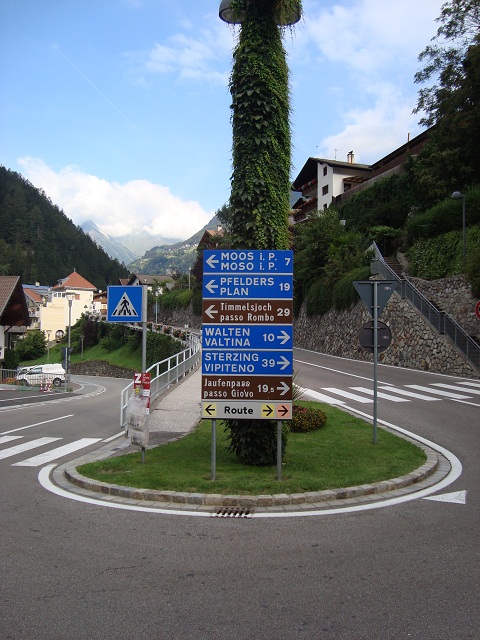 In St. Leonhard you can either choose the way to Jaufenpass or to Timmelsjoch. Today it's the left turn.

At an elevation of 1,000m you pass the village of Moos. 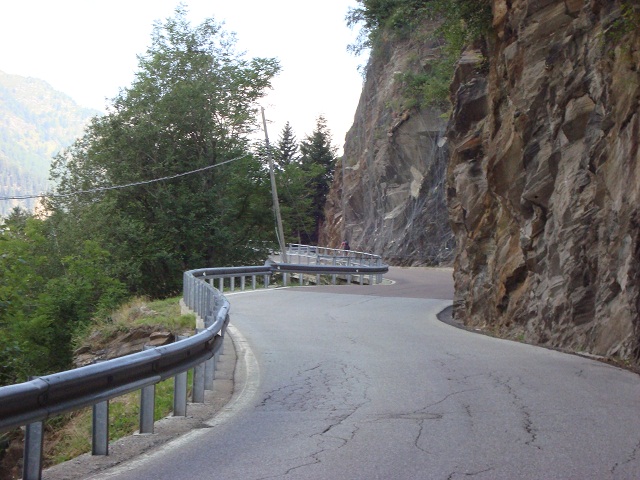 The lower part of the route.

Further way to Timmelsjoch shows up for the first time (disappearing in the clouds in the background). 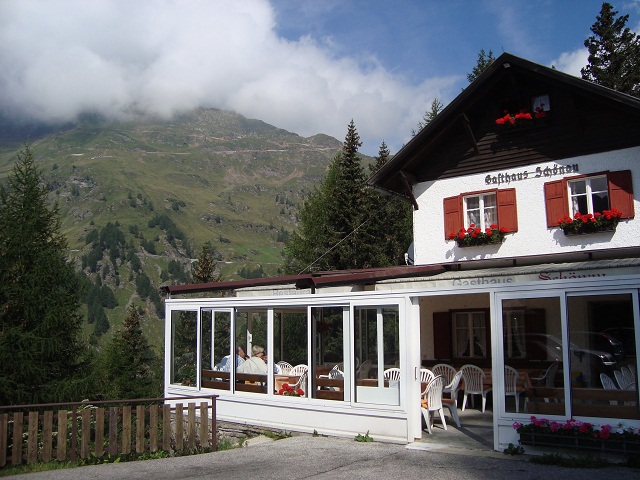 At "Gasthaus Schönau" you can get an idea of what will follow... 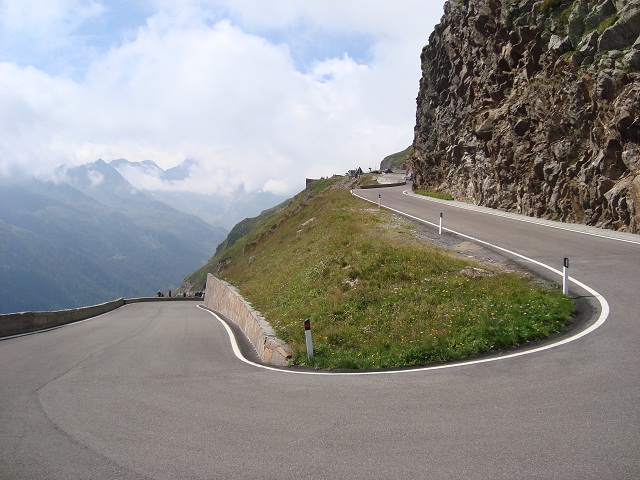 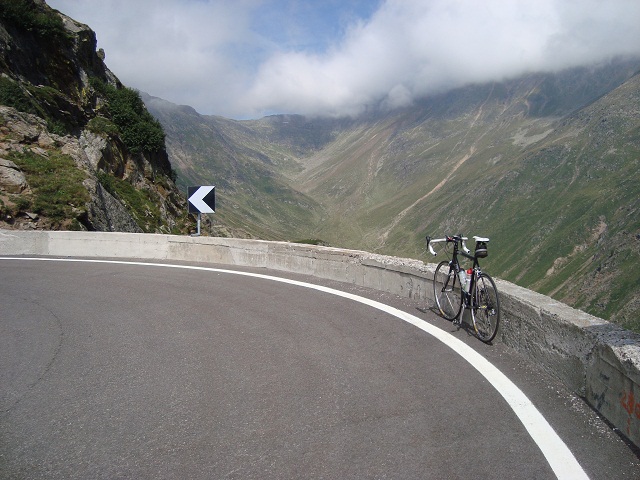 The summit is anywhere up there. 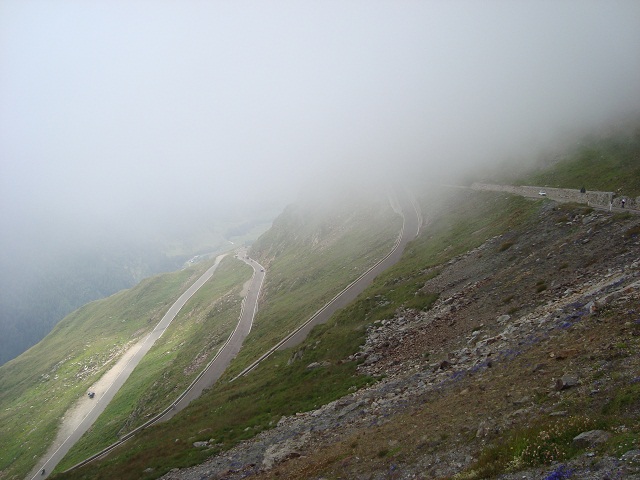 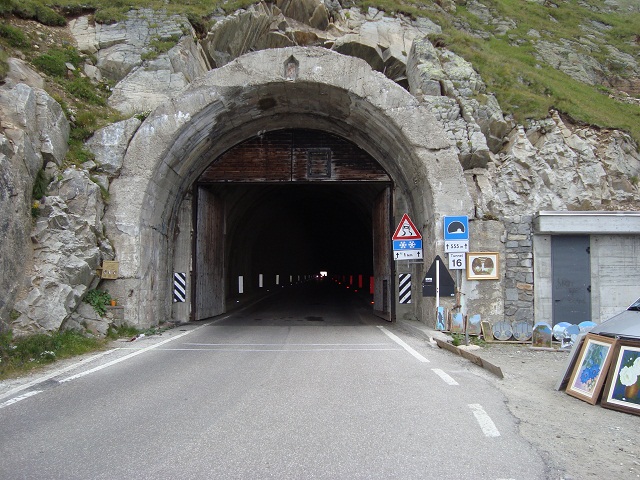 The route has several tunnels and half-tunnels. Most of them are quite short but shortly before pass summit you have to face this problem: The pitch-dark tunnel has more than 500 meters and is completely unlighted. Due to the quite heavy motorized traffic (in particular motorbikes on weekends) you should not abstain from wearing a back light with you.

These are the last meters to pass summit. 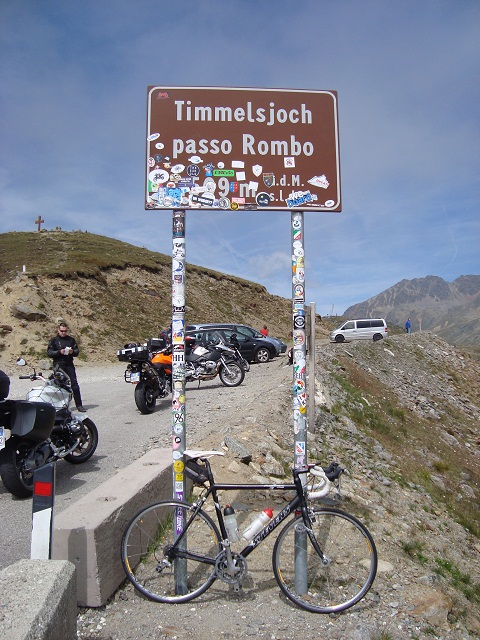 Official elevation of the pass is 2,509m. However, two GPS devices and my barometric altimeter report an altitude of beneath 2,500 meters. Current maps sometimes also show only an elevation of 2,491m. 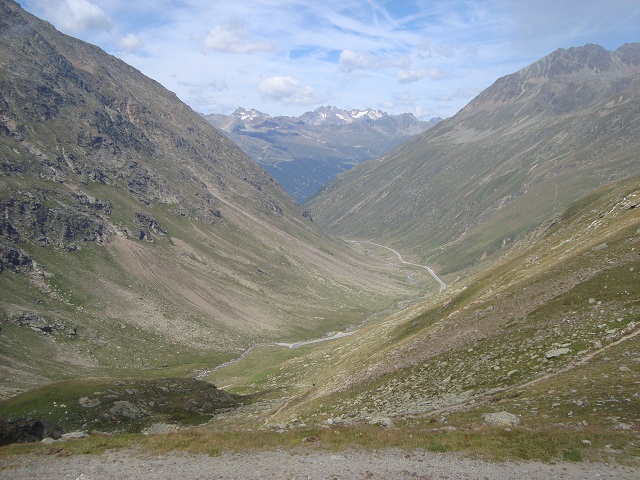 The view to the Austrian side shows the Autobahn-like descent towards Sölden. At Ötztaler Cycle Marathon a photo sensor analyses the highspeed of the participants down there.