The gravel runway up to Colle Sommeiller leads to an elevation of 3,000 meters above sea level and is publicly accessible by motorised traffic - and thus also by mountain bike. Appropriate time slot for an uphill climb is end of August when there is neither old nor new snow on the road. The route at the very end of Italian Susa valley has two different parts: The runway from Bardonecchia is rather uninteresting on its first 700 heightmeters but becomes in its upper part a very formidable and diversified challenge in awesome scenery. The way has several groups of switchbacks alternating with straight but steep parts. The higher you get the runway becomes worse but it stays continously cyclable. 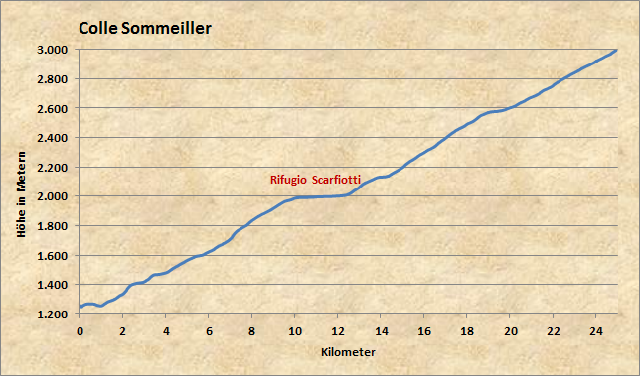 After departure in Bardonecchia the way leads 10 kilometers to Lago di Rochemolles at 2,000 meters. After that follows a ramp to Rifugio Scarfiotti. At an elevation of 2,600 meters there is a further short rest period at a high plateau but then it finally goes steep to the end of the road at 3,000 meters. 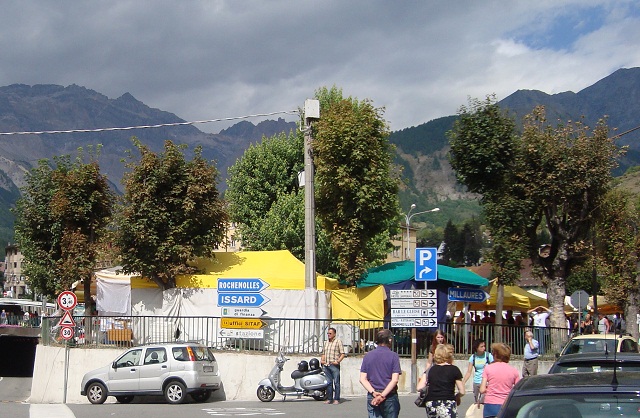 At first you have to find in Bardonecchia the way to direction Rochemolles. (And you should hope that the dark clouds stay calm today...) 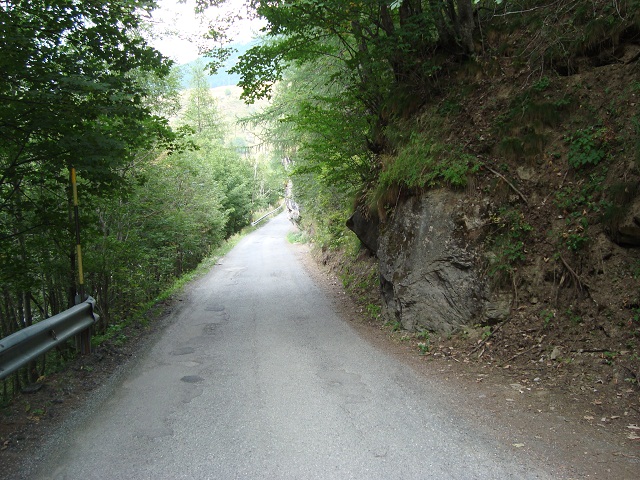 The way is asphalted until the mountain village of Rochemolles at approx. 1,650m. Behind the village the way becomes a dirt track leading to Lago di Rochemolles. 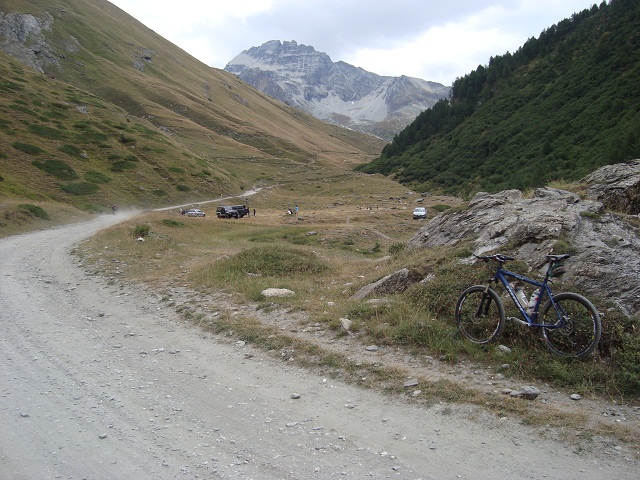 Behind the dam lake it becomes more interesting and you have to conquer a further steep part in the slope on the left side.

After half of the route you reach at 2,150m the Rifugio Scarfiotti (in the left background) being surrounded of gorgeous mountains and a waterfall. The right way leads up to Colle Sommeiller. The barrier is opened today and provides free entrance to everyone. (Approx. 15 mountain bike cyclists, 25 motorised cross-bikers and some ten cars come across the runway on this Saturday at the end of August) 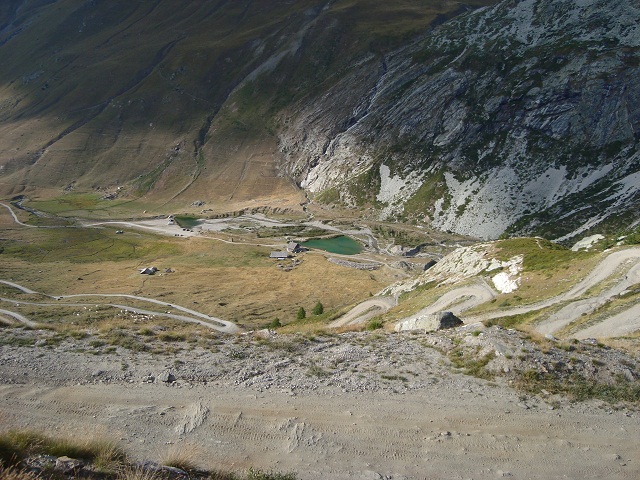 Behind the barrier a further group of turns follow and you have this amazing view down to Rifugio Scarfiotti. 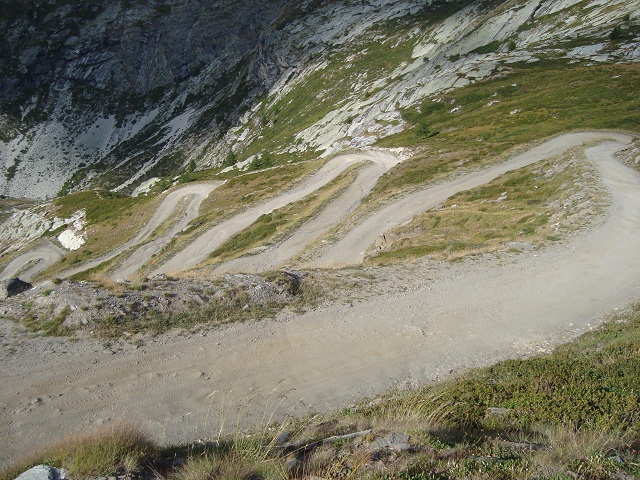 This is the view back onto the several switchbacks. 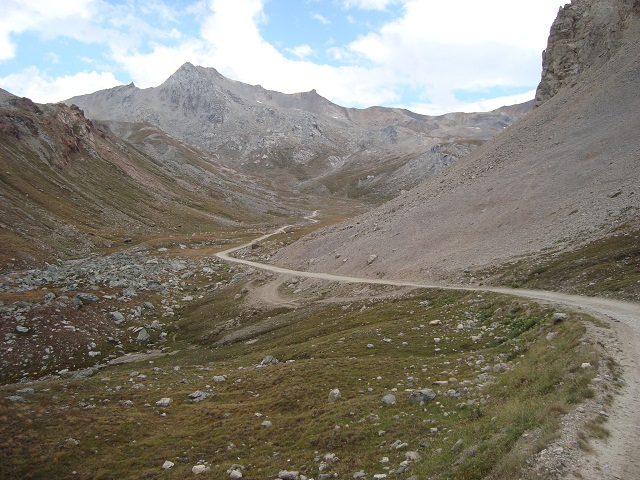 And again there is a plain plateau after overcoming the steep ramp. 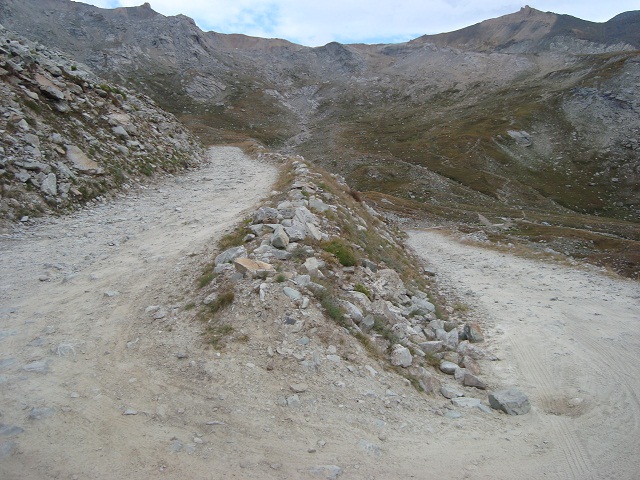 Once again a new group of hairpins and the road condition becomes more and more worse. 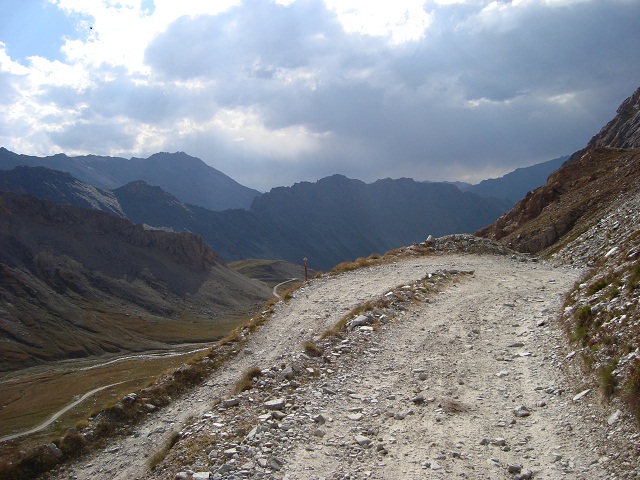 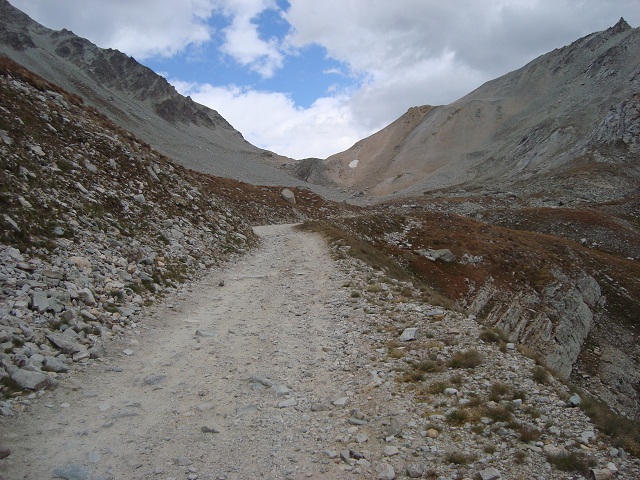 Pass summmit appears in the center of the image. 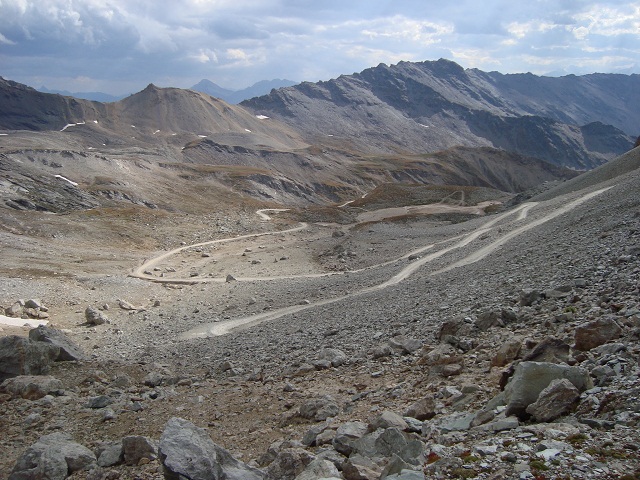 However, there is a final group of hairpins in rocky desert above an altitude of 2,800 meters. 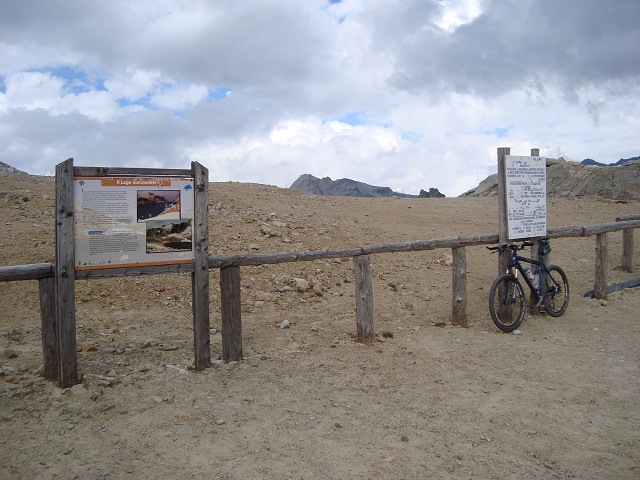 Finally, you stay in front of a wooden fence at a parking area marking the end of the road. The right sign reports an official altitude of 3,009 meters above sea level. My GPS device confirms at this spot 2,994 meters. This matches with the elevation indication in several maps. Behind the fence you can even get a little higher and in the past there was a small way to a flag hill above 3,000 meters. But the flagpoles are no longer in operation and the way is not accessible by bicycle. 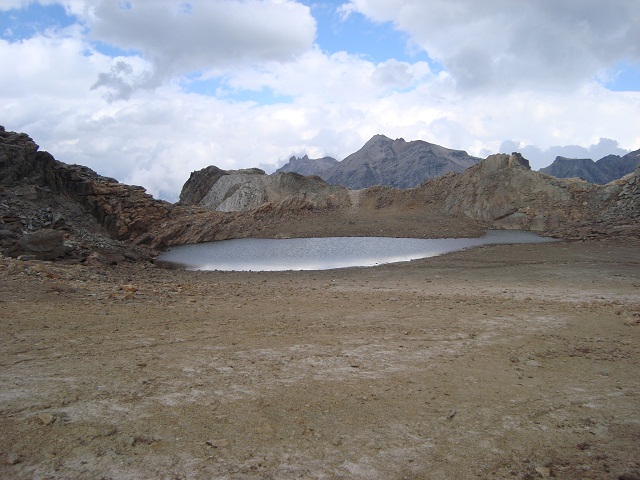 This is Lago Sommeiller behind the fence at the border to France.