Spanish Pico del Veleta in Andalusias Sierra Nevada is actually the highest spot in Europe reachable on designated ways for cyclists. While its northern ascent is entirely asphalted and can be conquered on a road bike the southern approach is only a narrow unpaved hiking path that can be challenged using a mountain bike. Both ways are rideable on its total distance and can even be combined in a very demanding Sierra Nevada Traverse. 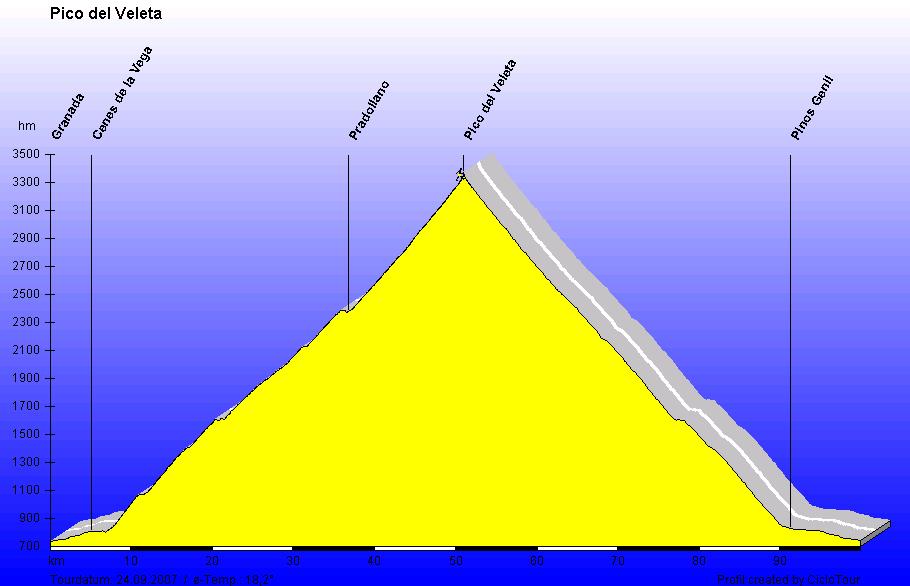 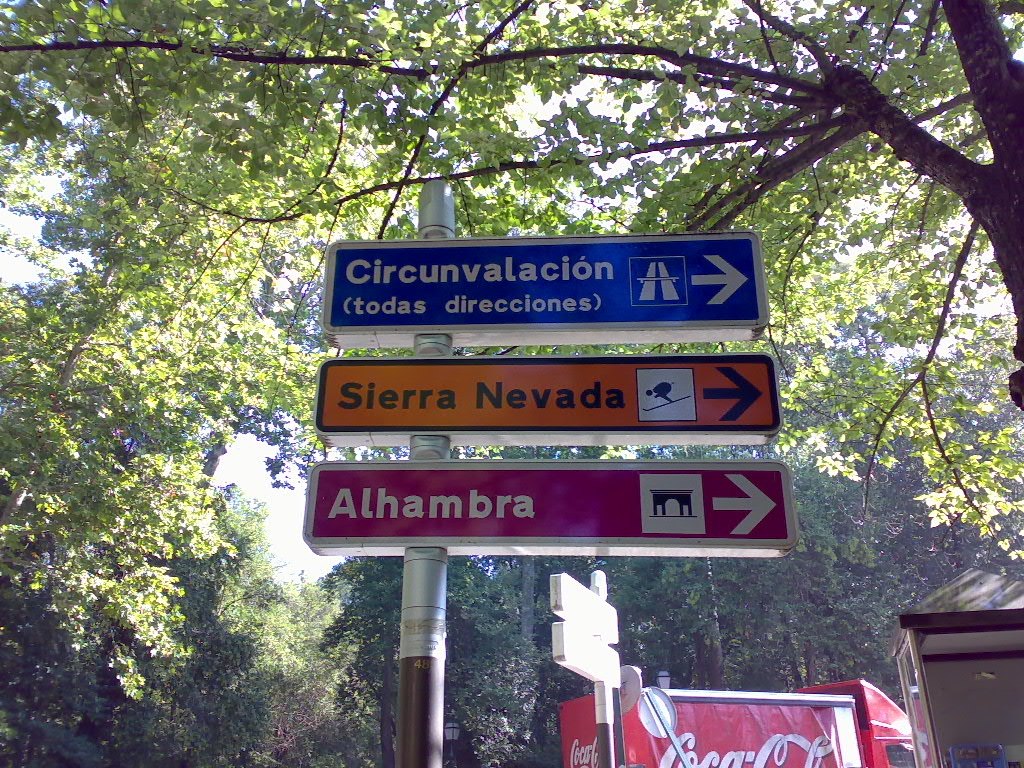 Tour starts in Granada following Rio Genil and the signs showing the direction to "Sierra Nevada". The ski area beginning in the village of Pradollano up to Pico del Veleta is meant by that signs. Just below the summit the last cable car lift is located and the road is paved up to this point. This provides the unique opportunity to ride this route up to 900m before the summit with a road bike.

Road A-395 leads from Granada up to Pico del Veleta. However, you will find the reference to the Veleta actually nowhere on the entire route. In Cenes de la Vega one finds upper junction. Here you should straightly ride A-4026 via Pinos Genil and afterwards divert towards A-395. This part of the trip is significantly more pleasant than the high-speed autobahn-like lower part of A-395. 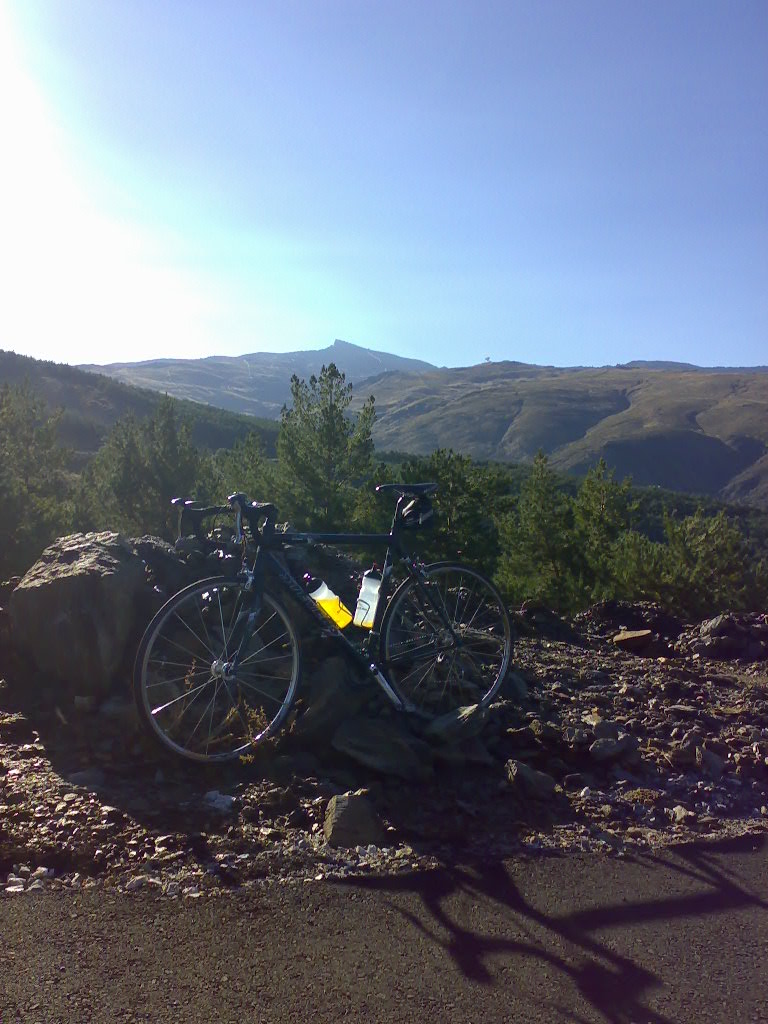 Approx. at 2,000m altitude you can find this amazing first view of the peak of Pico del Veleta and the observatory located at some 3,000m altitude. However, it is recommended to ride previously at 1,800m (where the only gas station on the entire route provides some liquids and food) the nicer scenic and less crowded route A-7903 leading to A-395 only above the village of Pradollano. 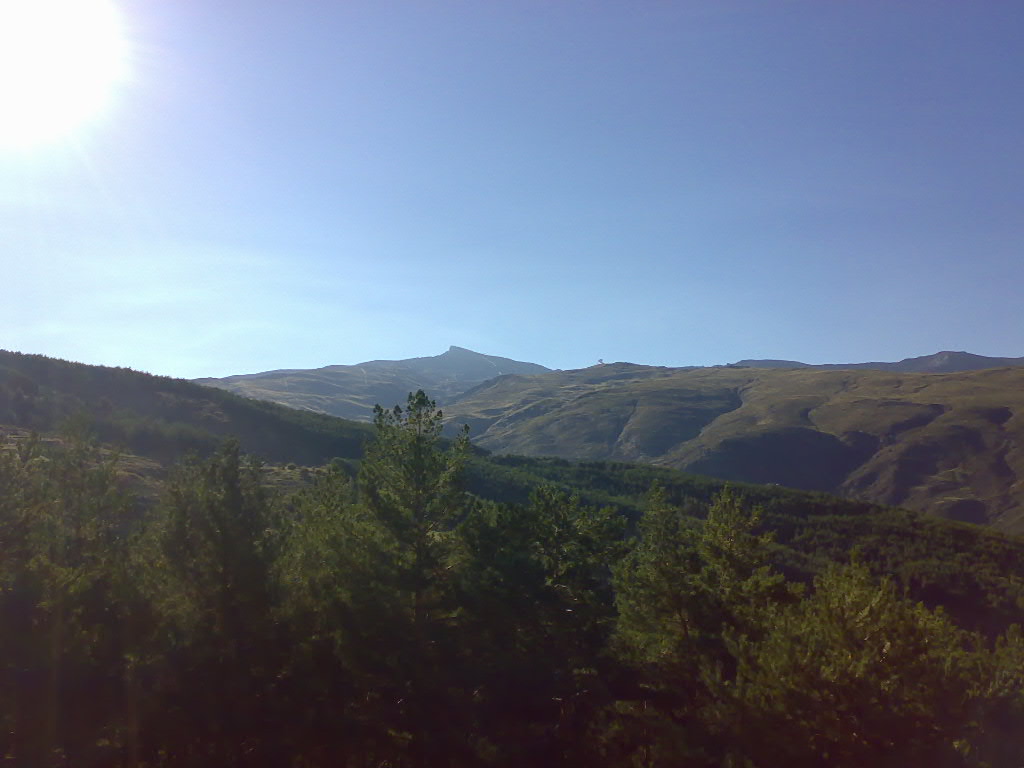 Distance to Veleta from here has still some 1,400m of altitude difference and 25km. 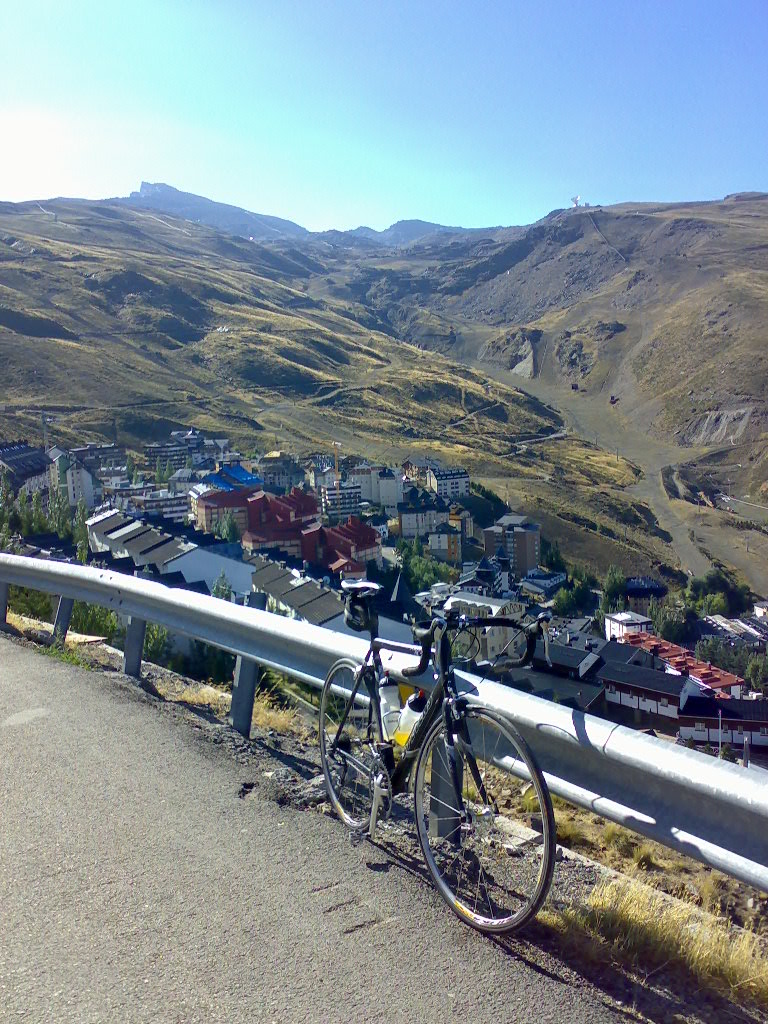 Pradollano is a ski resort at approx. 2,400m consisting only of thousand of hotel beds. In late summer the place is only a shabby site and no hotels or supermarkets are opened. The ski area begins here and leads directly to the ascent up to the Veleta. At the end of September you can only find some Mercedes prototype models obviously from Stuttgart/Germany testing on the deserted road. 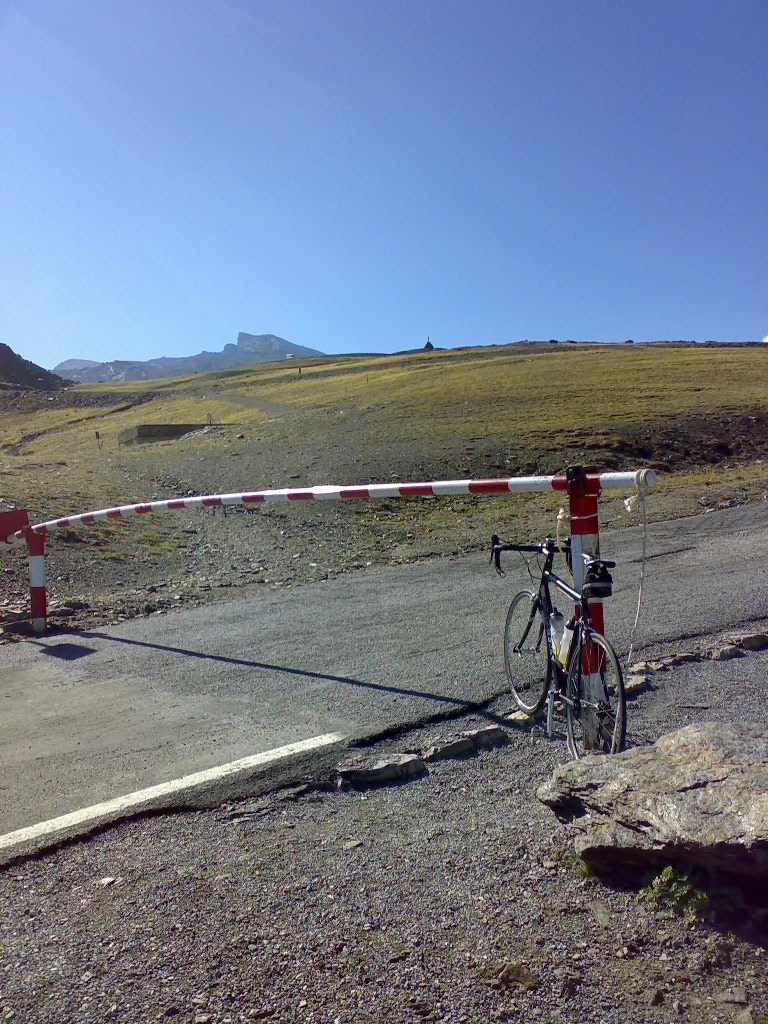 At 2,600m this barrier represents the end for public motor traffic. The road conditions up to this barrier are excellent as the entire route from Granada has apparently been newly asphalted in late summer 2007 and thus provide a paradise for road bikers. However, behind the barrier the conditions will then significantly become worse. Pot holes and rock slides do not significantly impede on the ascent but constitute problems on downhill ride. 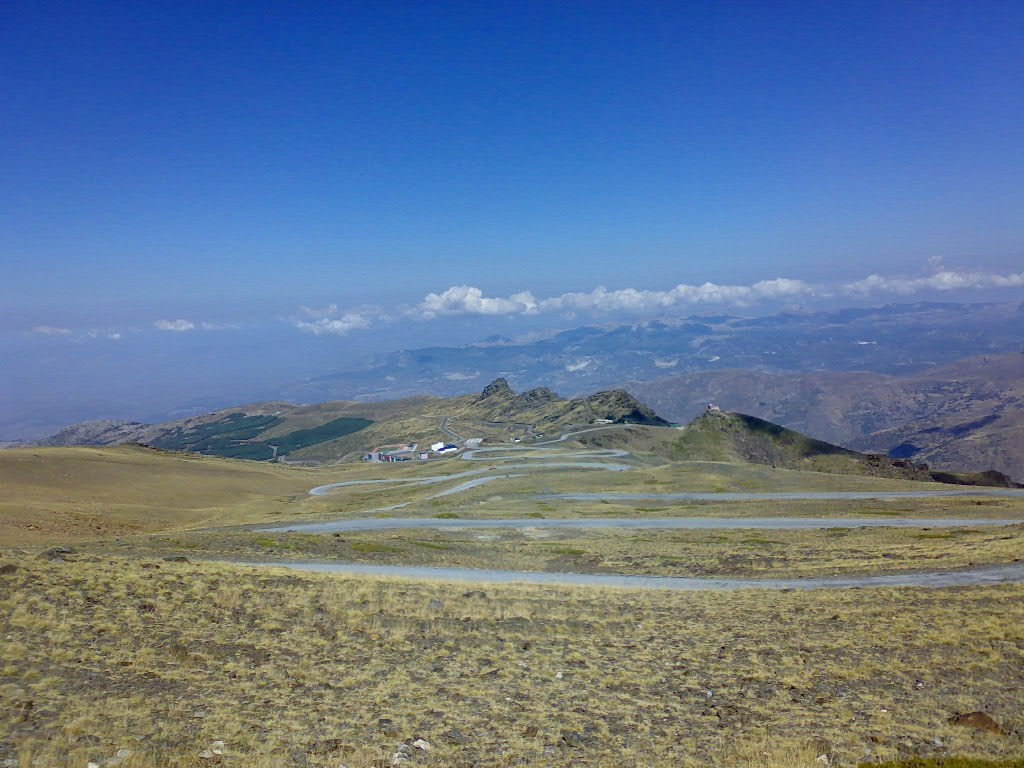 Behind the barrier several serpentines with a 6% grade wind up the road. Amazing view in direction North to the foothills of the Sierra Nevada. Here you are actually at an altitude which can be reached in the Alps on only very few roads. 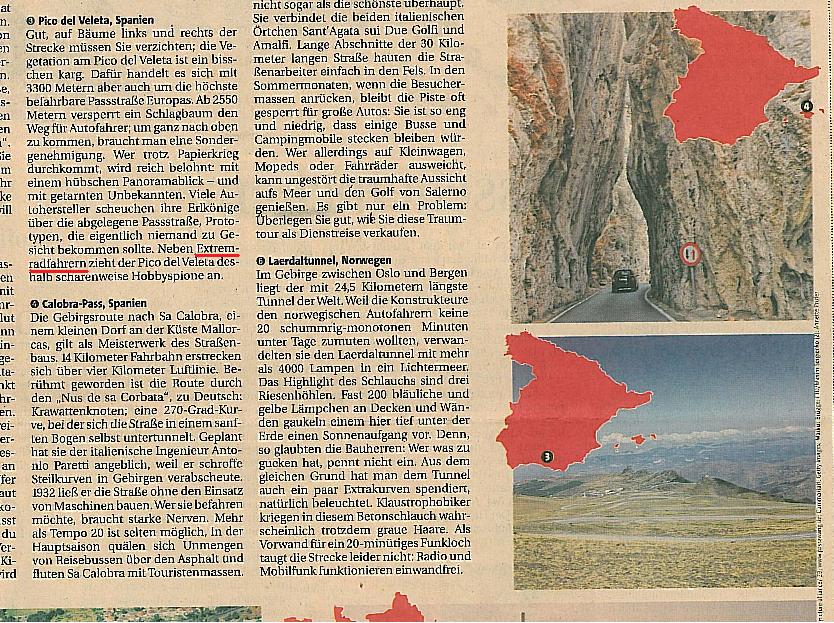 At an altiude of some 3,000m Pico del Veleta seems to be near. However, the summit is still far away and road conditions become significantly worse. After a few kilometers the pass road diverts to the South but that part is only rideable with a mountain bike. 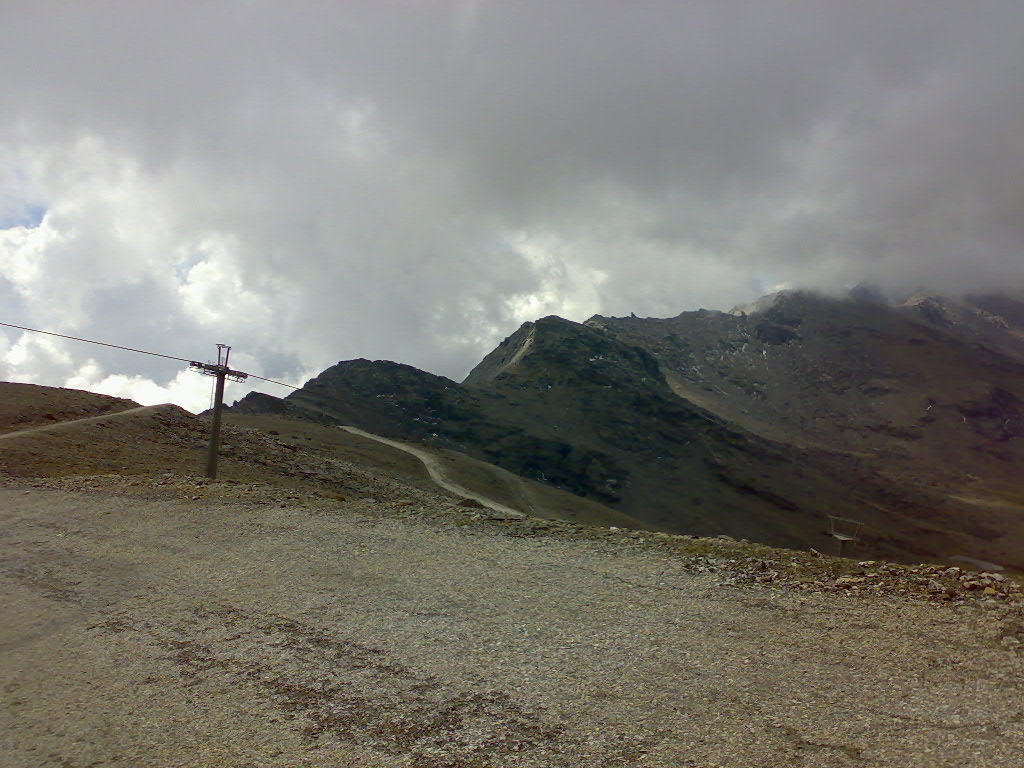 Last mast of the skilift is located at 3,250m. Very similar to the Alps weather conditions can become worse within only few minutes. Suddenly rain clouds appear behind the Pico and temperature decreases more than 20 degrees Celsius down to only few above freezing point. 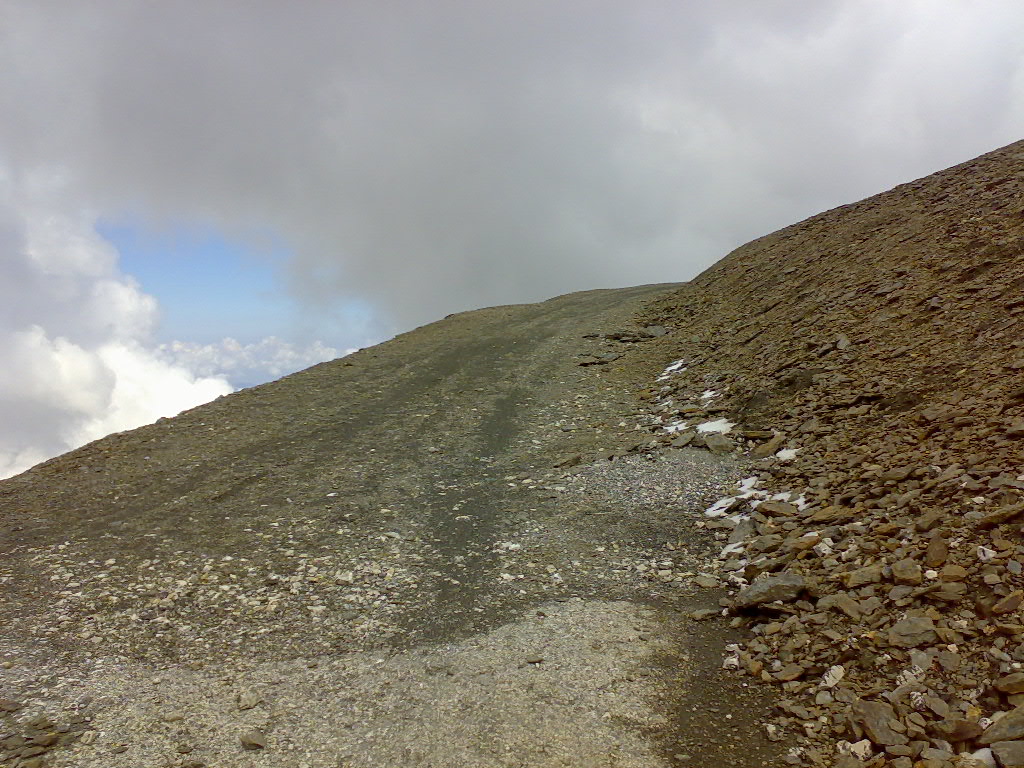 The altimeter shows 3,267m when the road conditions do no longer allow to ride the route with a race bike. Due to the altitude and the approaching bad weather one should not risk a flat tyre. Thus, you have to push your bicycle the last 900m. On last 10m you even have to shoulder the bike. 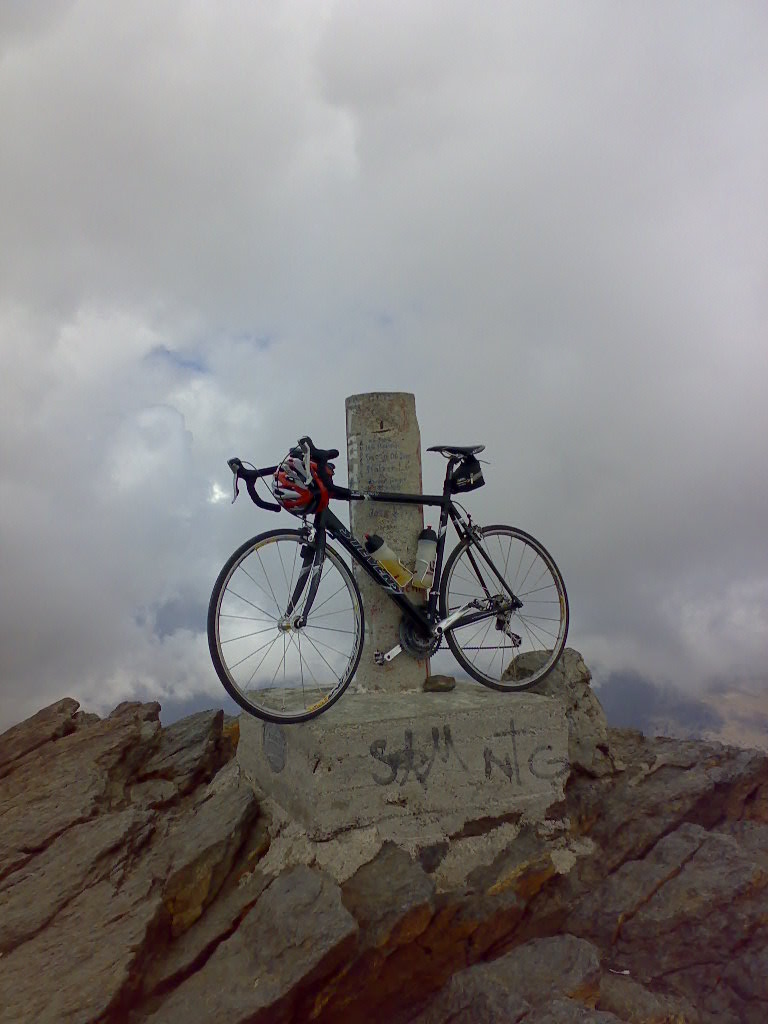 Top of Europe - summit of Pico del Veleta at 3,394m above sea level

After the tour a visit of the Alhambra in Granada is strongly recommended. 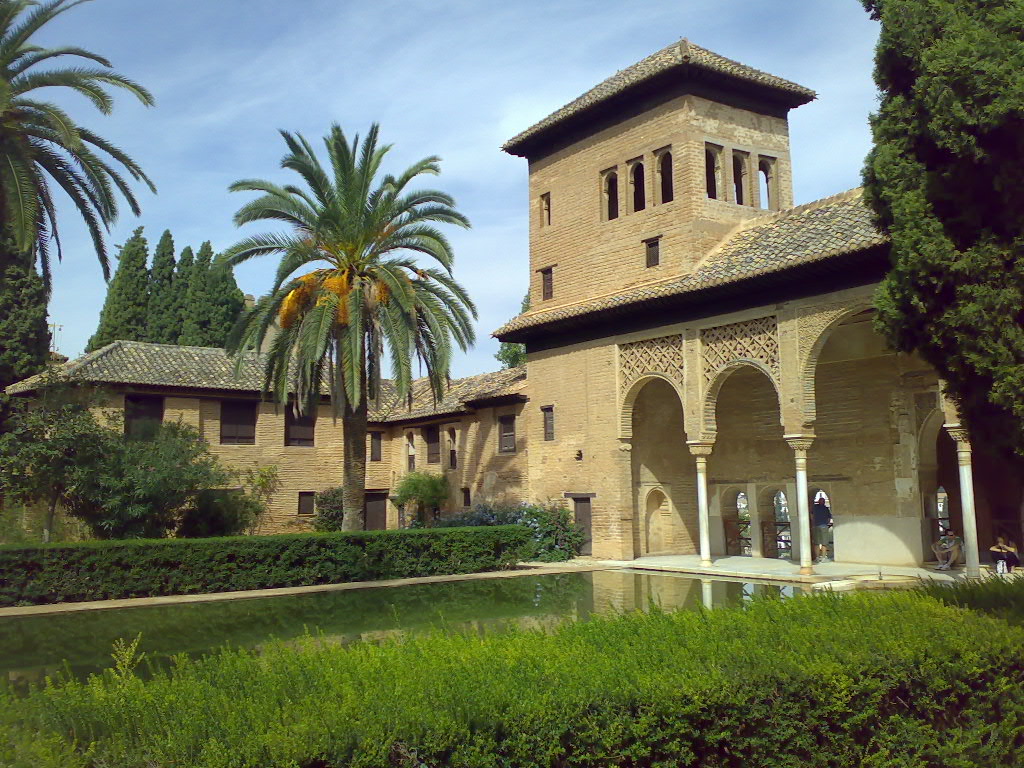 The Nasrid palace within the Alhambra

Southern ascent is characterised by a moderate incline up to some 3,000m with a subsequent bumpy passage and a final steep slope up to the summit. 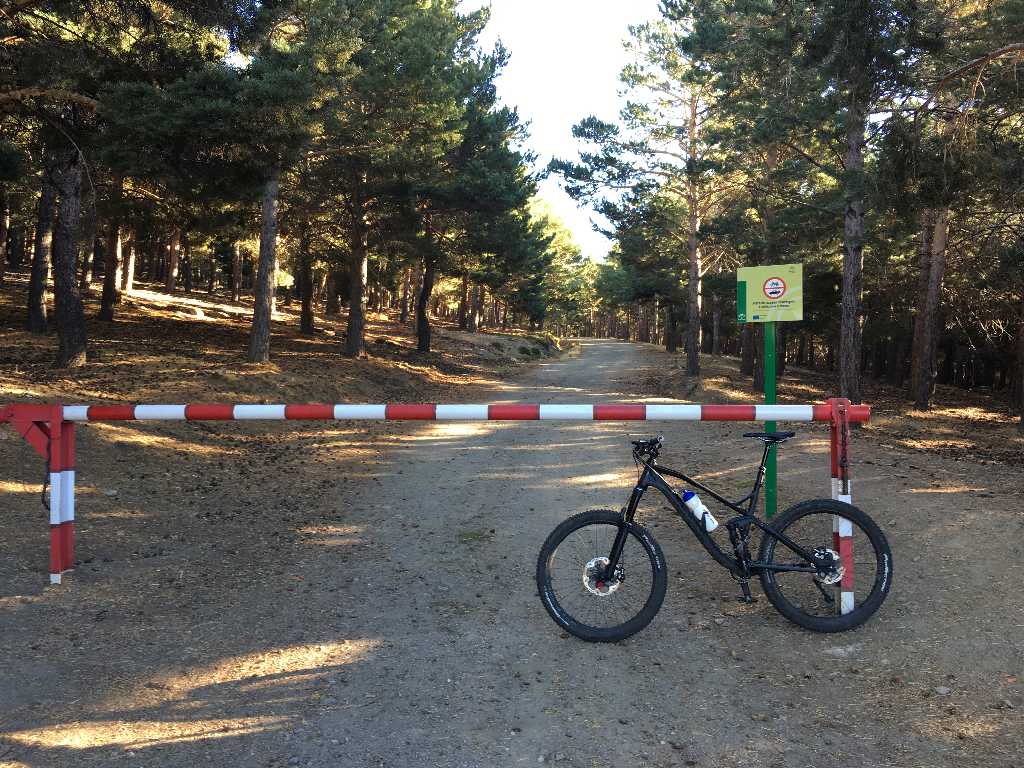 Departure at the barrier of the parking area named "Hoya del Portillo". You can even start your ride down in one of the Alpujarra villages. From Capileira it is some ten kilometers on a gravel road with an average 7% grade. 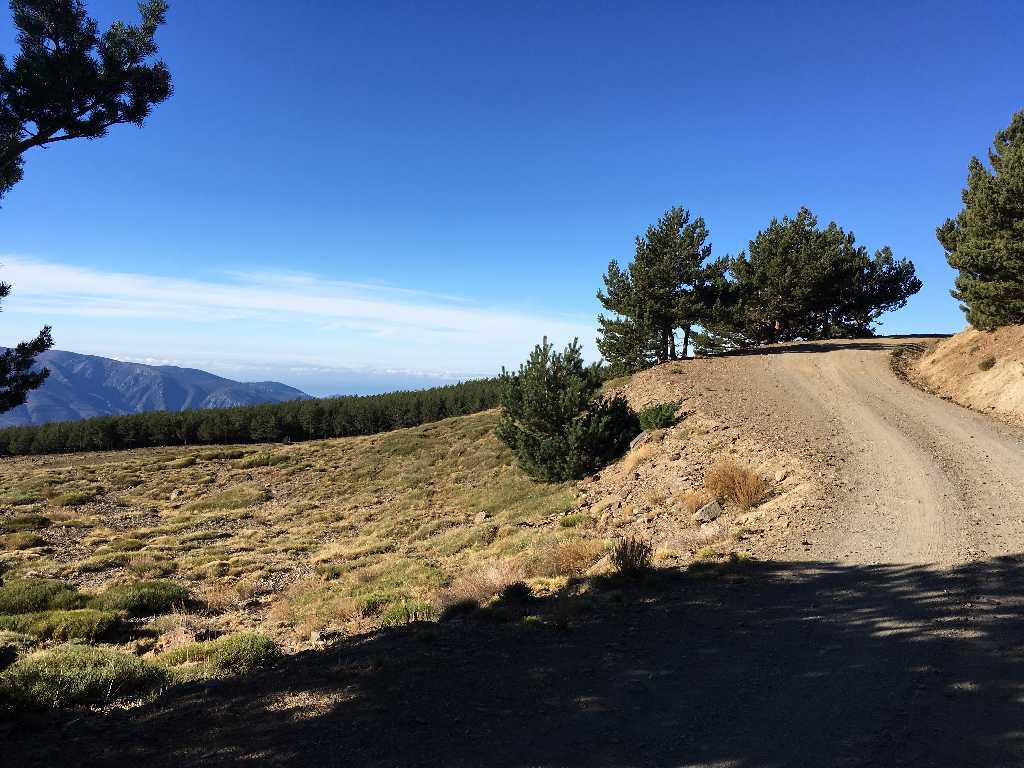 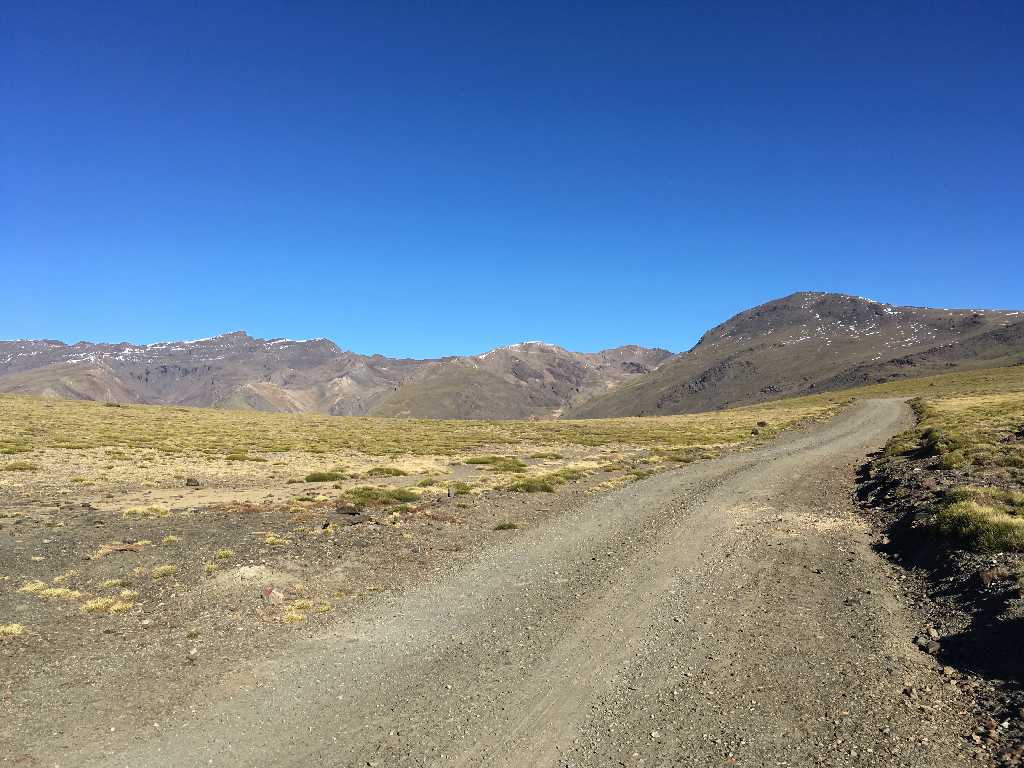 After some eight kilometers the Sierra Nevada ridge becomes visible in all its splendor: To the right Mulhacen being the tallest mountain on the Iberian Peninsula, in the center Cerro de los Machos and in the left back Pico del Veleta with its characteristic peak - out today's destination. 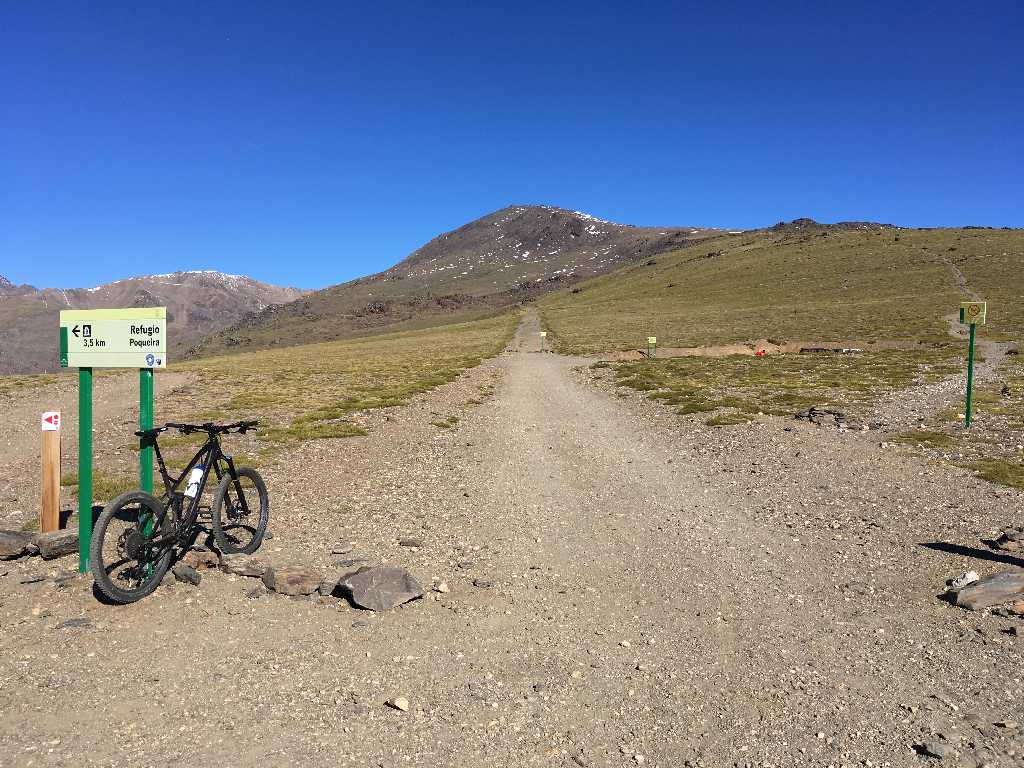 Only parting of ways is at this site at an elevation of 2,750m. To the left the way down to Refugio Poqueira, to the right the way up to Mulhacen (prohibited to cyclists!) and straight ahead our way to Veleta. 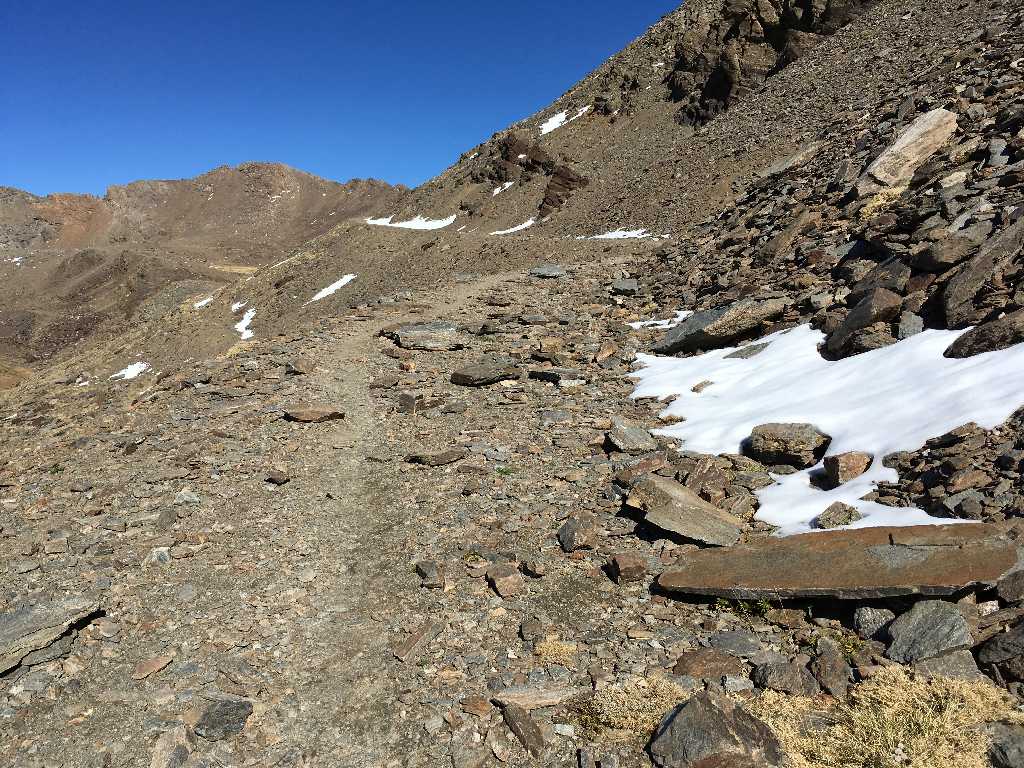 Way conditions become worse. The former roadway is littered with stones and rockfalls. Actually, the way becomes a very narrow path only for hikers and bikers. 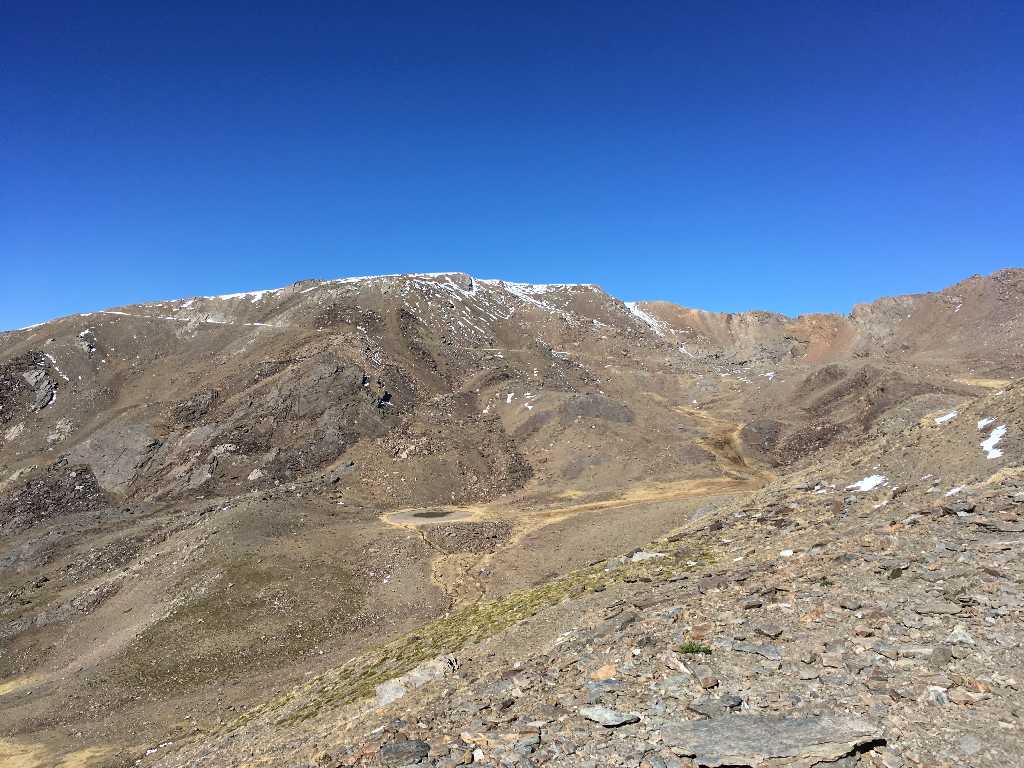 The long way to the top becomes visible in the back. 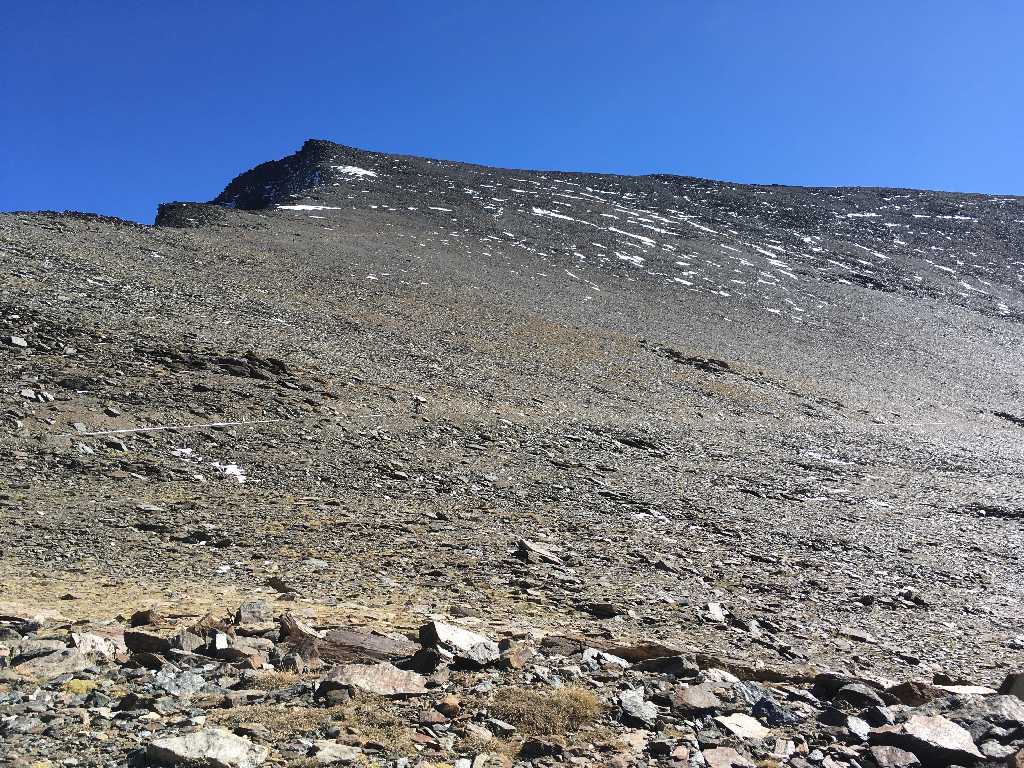 Western side of Mulhacen at an elevation of some 3,000m. In past times mountain bikers used to downhill here from the Mulhacen peak - today the way is explicitly prohibited to mountain bikers.

View back down to Refugio Poqueira right from the image center 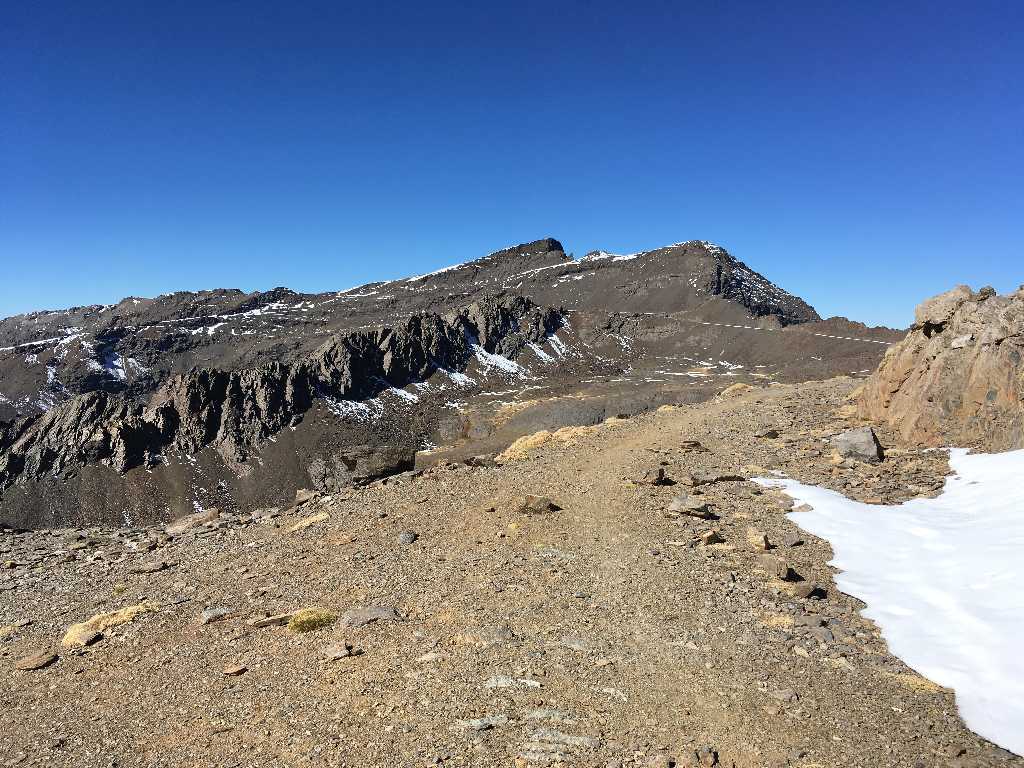 View to the Veleta summit at Refugio Pillavientos 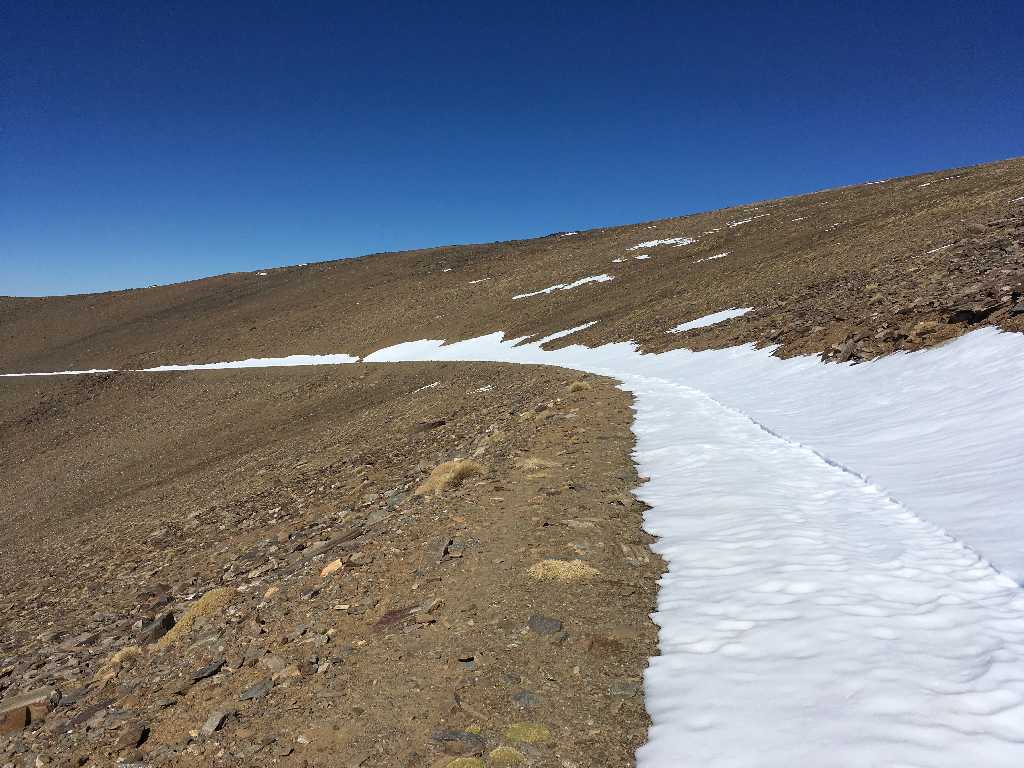 Due to heavy snowfall only ten days before (it is end of October) the way is partly still covered with snow above 3,000 meters.

The long way stretches on the next seven kilometers in a bumpy up and down... 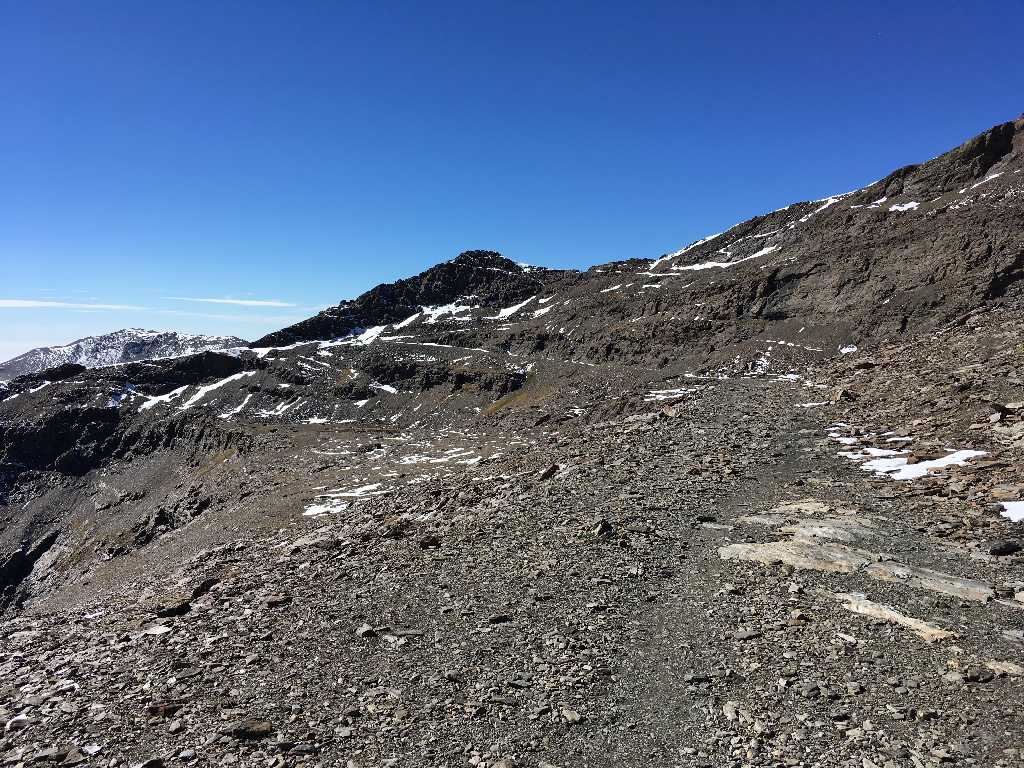 Exhausting ride through many stones

In one of the few shady areas you even have to push your bike due to the remaining snow on the track.

Some more stones, rockfalls and boulders... 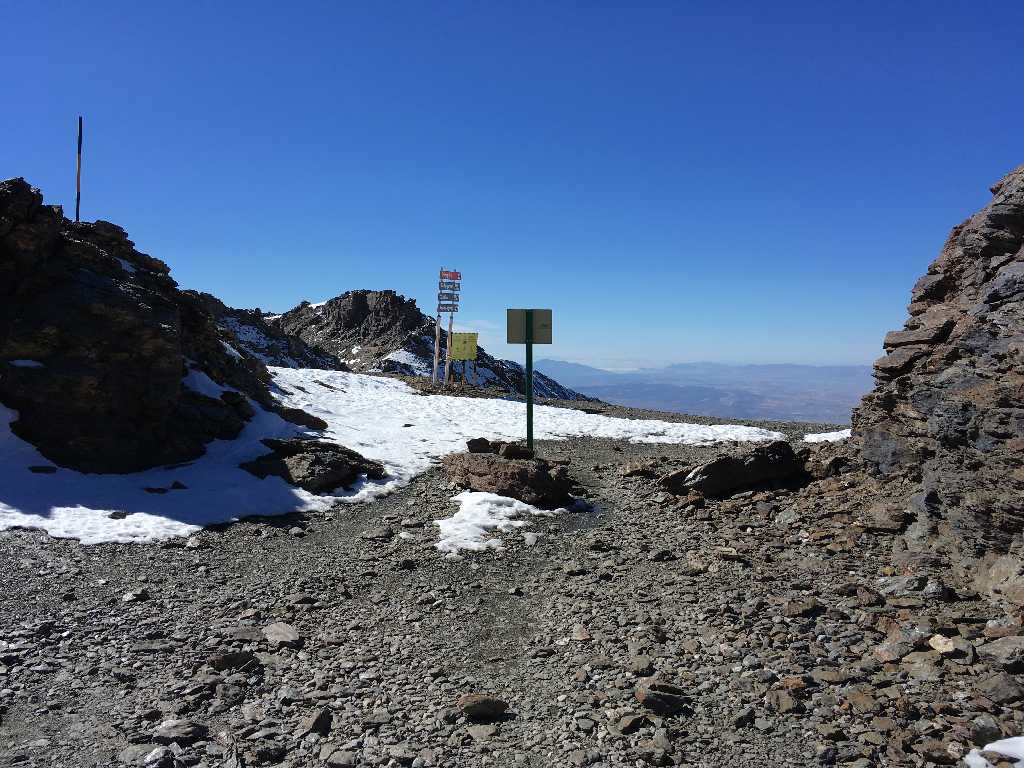 Pass summit of Collado de Veleta at an elevation of 3,205 meters 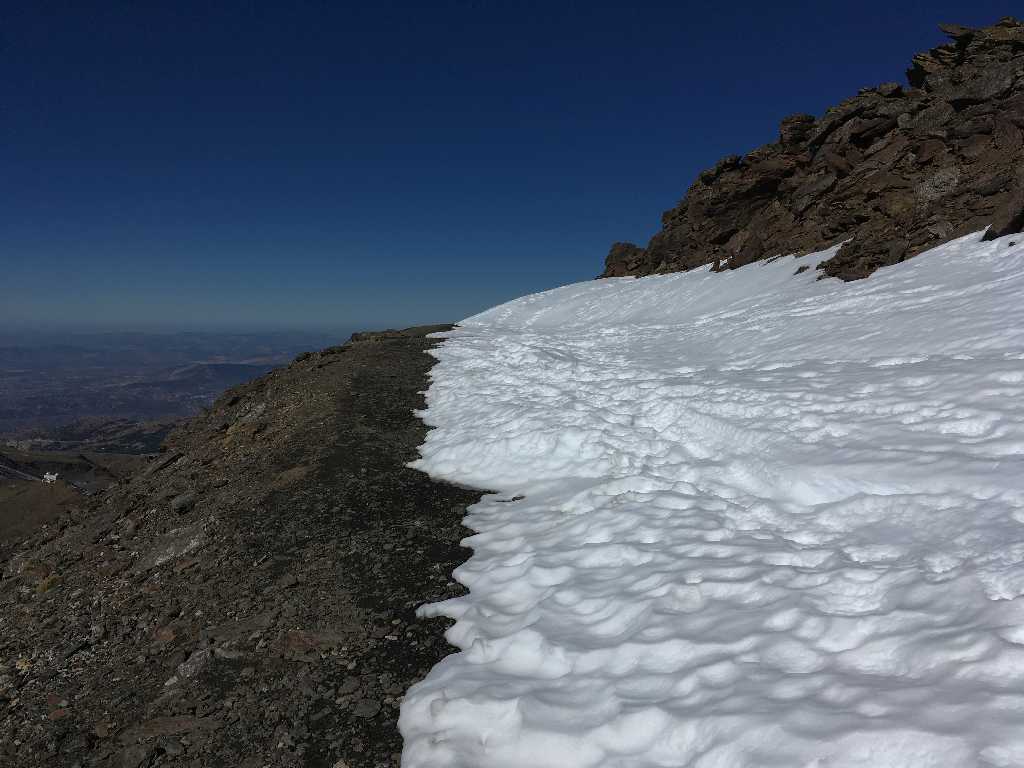 On the northern side you can choose between even more snow to the right, abyss to the left or narrow track straight ahead. 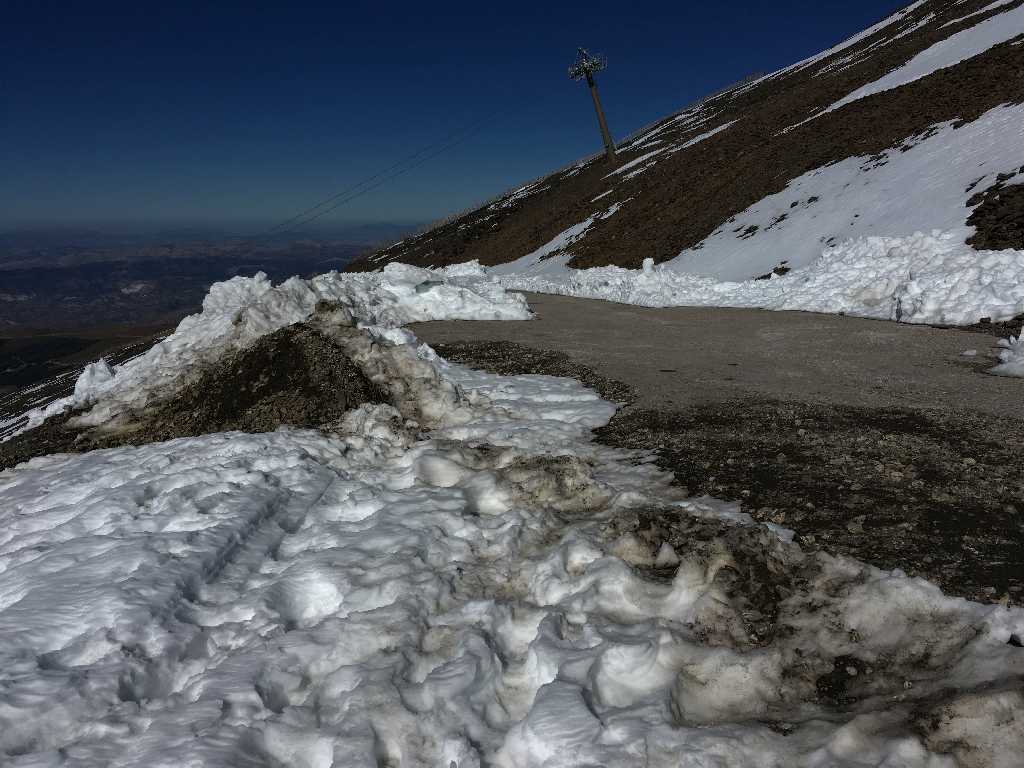 After some hundred meters the way reaches the asphalted northern ascent.

Surprisingly, the road is obviously cleared of snow. However, very poor road conditions (in particular for the road cyclists arriving from the northern ascent). 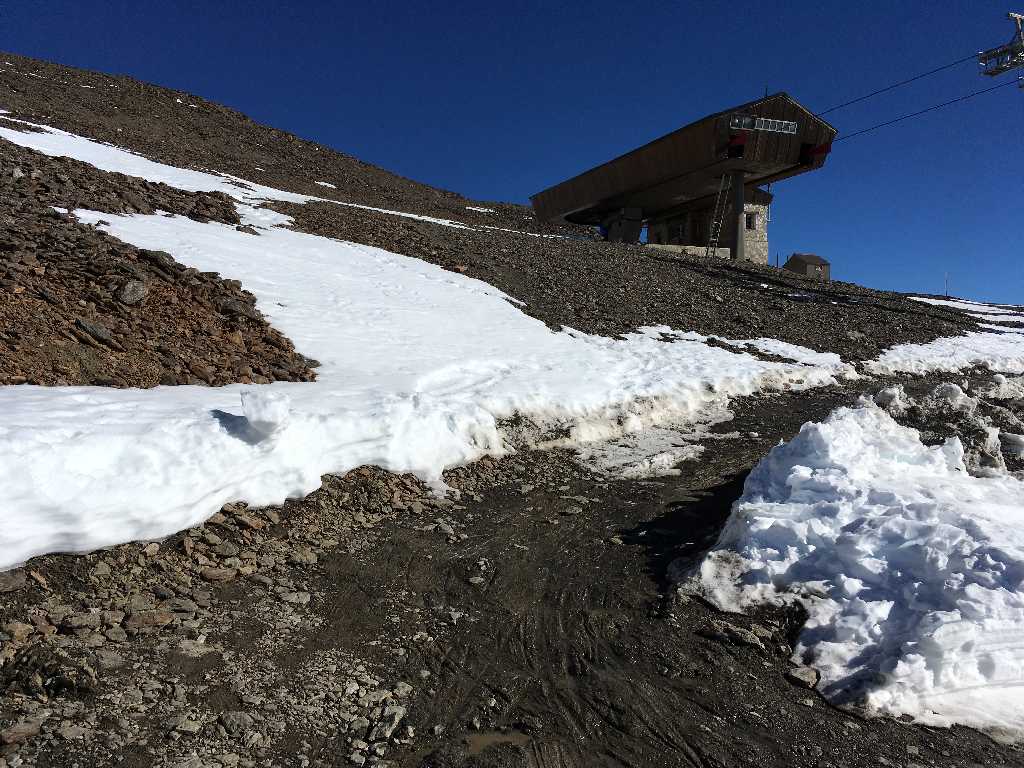 (Wrong) way to the cableway station 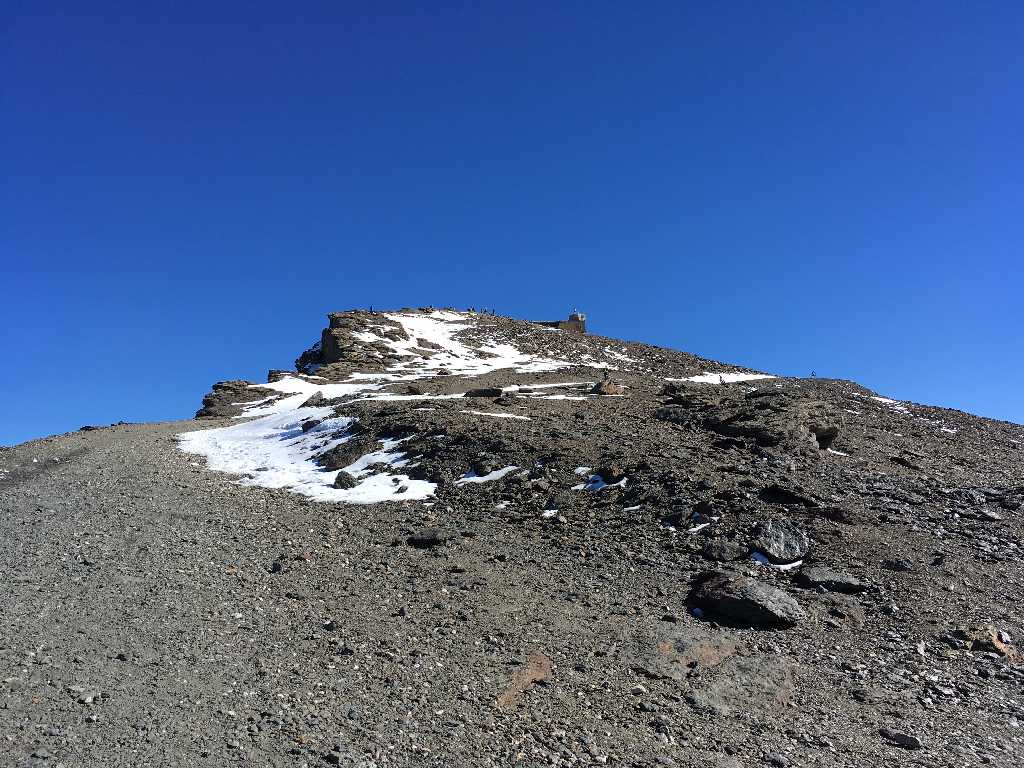 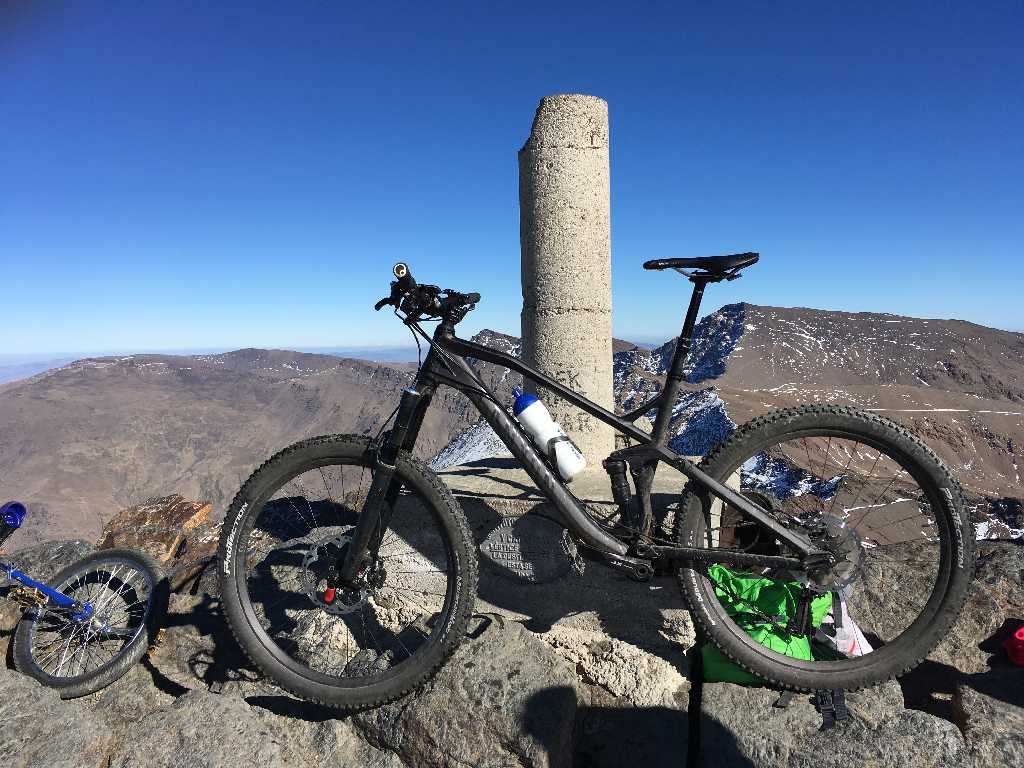 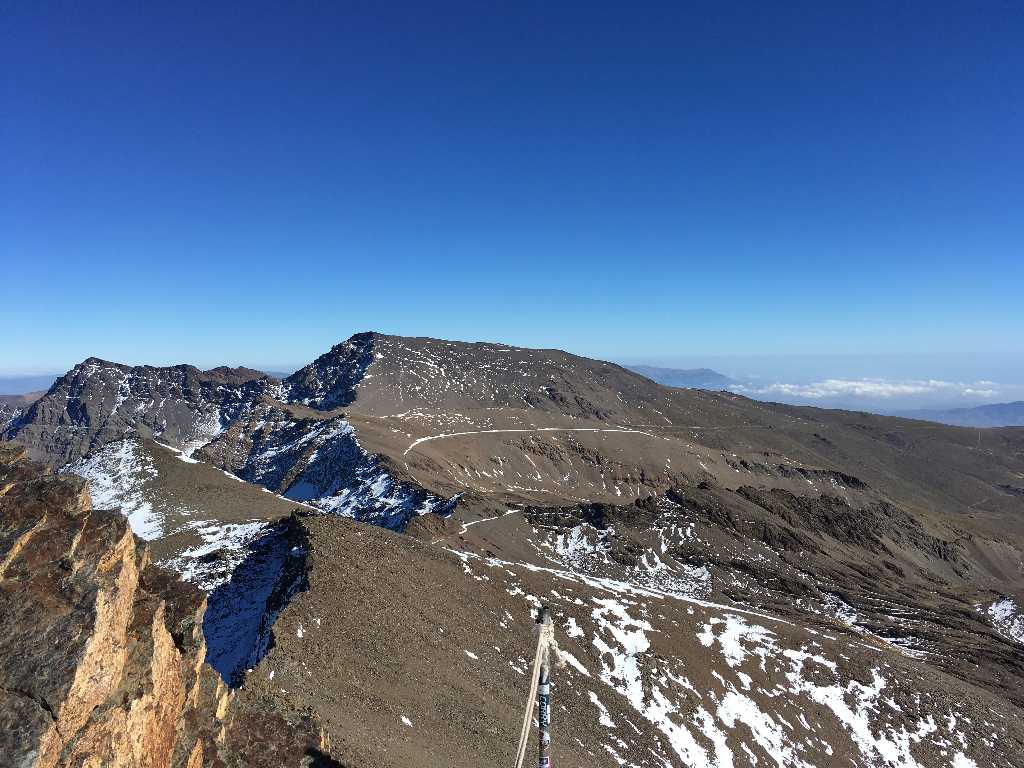 View from the summit towards Mulhacen 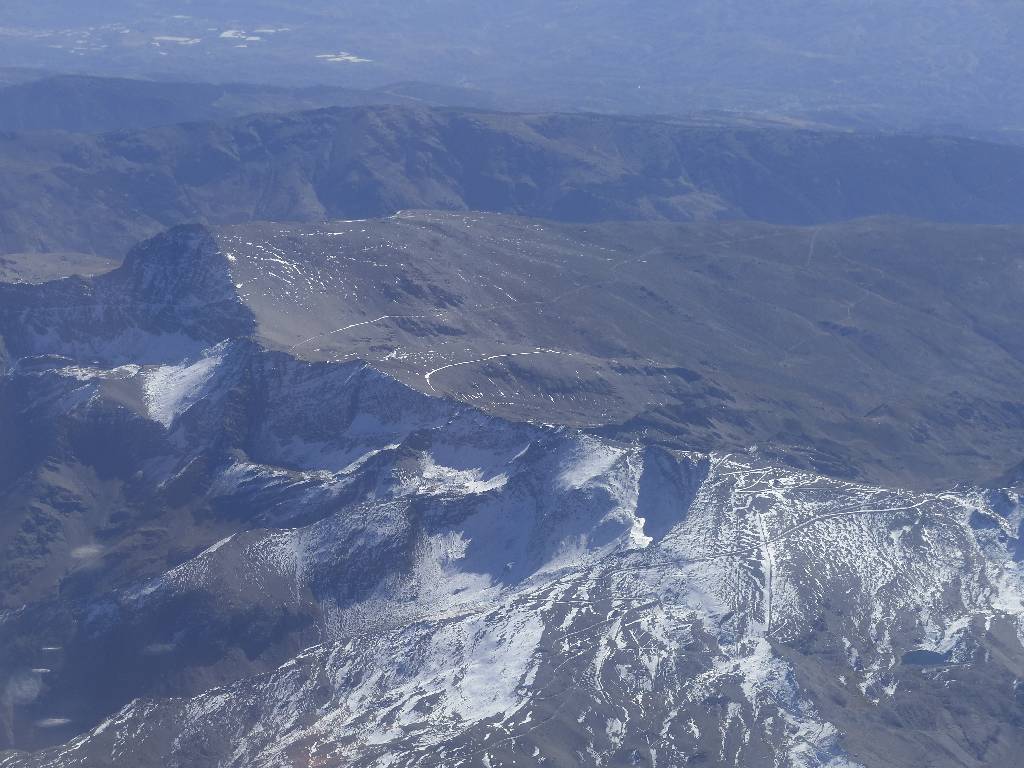 Image taken from the aeroplane only one day after the above ride: In the left back Mulhacen with its snow covered track towards Veleta. In the right front the zigzag way to Veleta summit.