Mt. Chacaltaya is the local mountain of La Paz/Bolivia and was in the past home of the highest ski area in the world. This is the reason why there is a road up to a ski lodge close to the summit. This hut is still operated by the Bolivian Andes Club (and was in the past by the Austrian Alpine Club). The outskirts of El Alto/La Paz are adequate starting point for this uphill climb. Total distance to the summit is "only" 15 kilometers and the altitude difference amounts to some 900 meters. However, the climb takes place above an elevation of 4,000 meters and leads to one of the very few spots on earth accessible by bicycle at an altitude of even more than 5,000 meters above sea level. 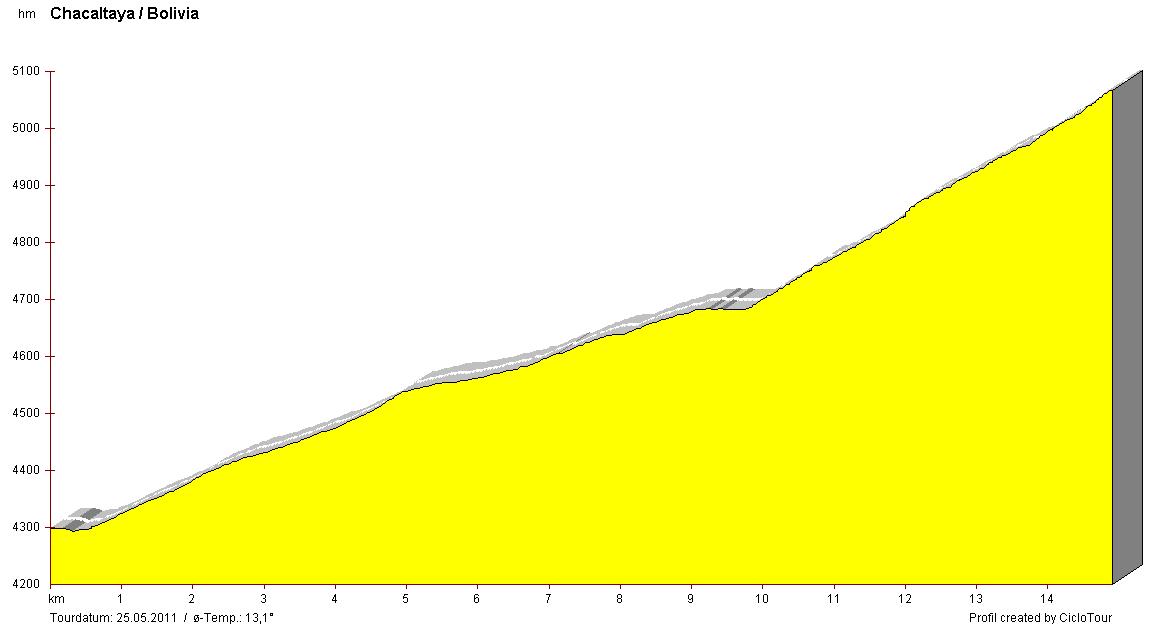 Elevation profile can easily be divided in three parts: Close after El Alto the graveled road leads slowly up towards Zongo valley and to base camp of Mt. Huayna Potosi. After five kilometers the side road to Chacaltaya diverts. Profile becomes there a little more flat but subsequently very steep on the final five kilometers with an average grade of some 10%.

Despite considerable doubts my mountain bike actually arrived at La Paz/Bolivia airport after a 32 hours journey from Germany via London and Miami. Breathtaking (not only due to the altitude) scenery of the highest seat of government in the world. This is the view from El Alto (some 4,000m) down to La Paz, embedded in a weatherproof basin some 500 meters below. In the back glaciated huge Mount Illimani (6,439m). 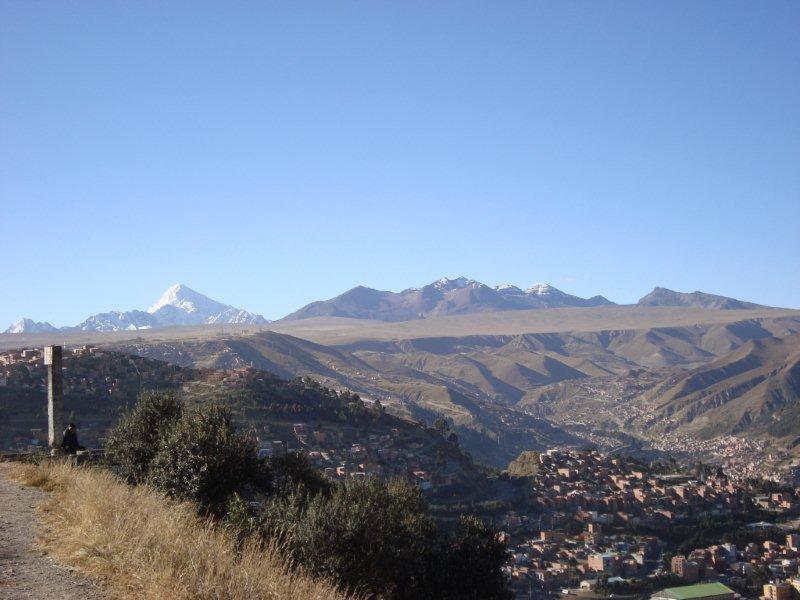 In the north snowcapped Mt. Huayna Potosi (6,088), said to be a technically "easy" 6,000m mountain. And to the right almost without any snow the object of desire: Mt. Chacaltaya!

Before riding a bicycle in that altitude with only few oxygen you should adequately acclimatise: First days in Bolivia are being spent with some hiking tours to Titicaca Lake... 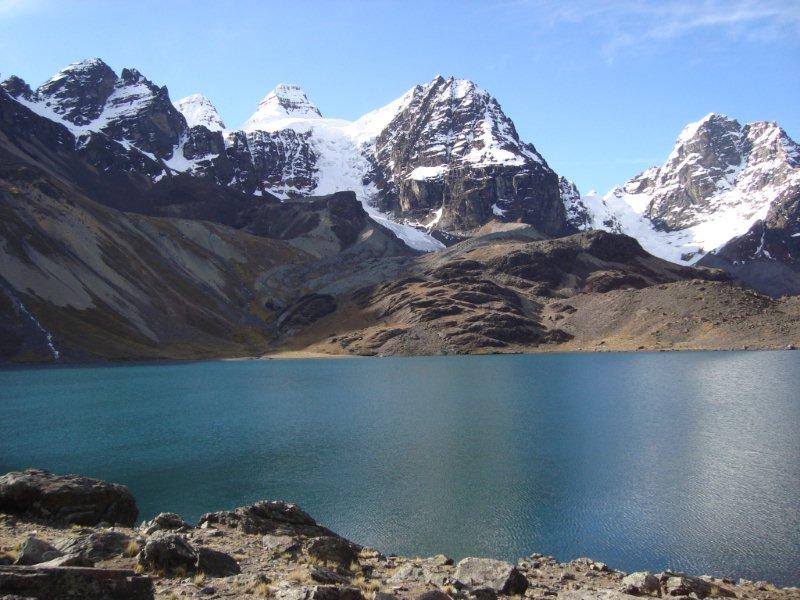 ...and some trekking to Condoriri mountains in the Cordillera Real. 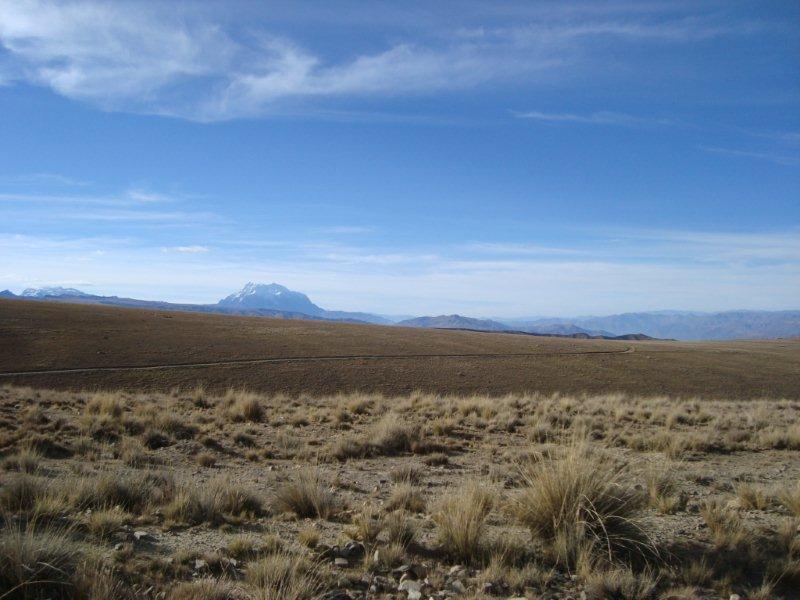 After a long last of ten days the ride can start. Close behind the outskirts of El Alto (actually being the upper part of La Paz on top of the Altiplano) the mountain bike can be taken out of the support car. In the back Mt. Illimani.

A support car and a guide accompany me in the lonesomeness. Due to lack of knowledge of place and Spanish language I appreciate a local domestic guide. Not only the arrival from destitute El Alto would have become an adventurous and potentially dangerous issue without a support vehicle.

In the lower part the runway leads directly towards Chacaltaya, firstly consists of properly fixed stones and is easily to ride on a hardtail bike.

Friendly locals being astonished at the Gringo cycling uphill. 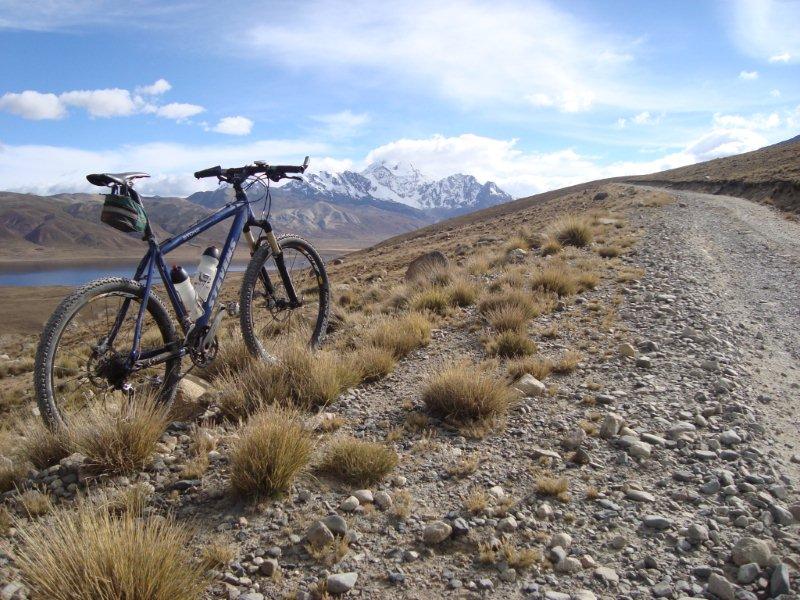 After some five kilometers there is the diversion to the side road to Chacaltaya. The diverting way to Zongo valley leads down to Laguna Milluni. In the back Mount Huayna Potosi. 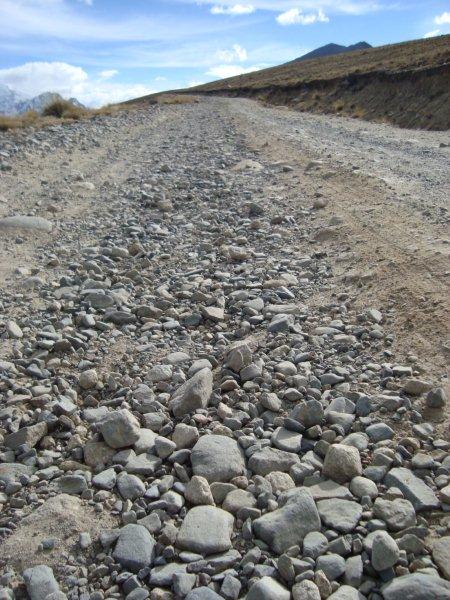 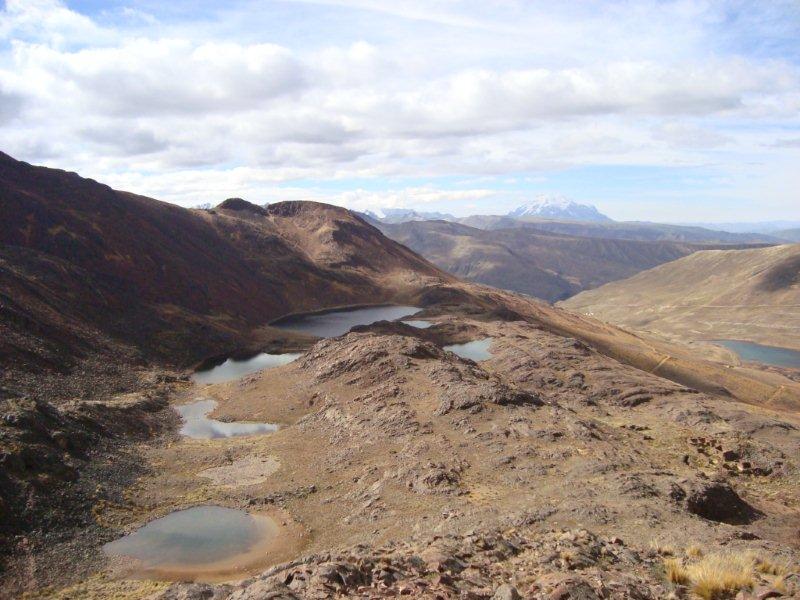 After some further five kilometers the final ascent commences with a scenery view on the "Seven Lakes". Despite the little lakes the air is dusty-dry. Lonesome stone desert is barely inviting. Cloudy sky helps to minimise the heat of sun insolation. At this elevation of some 4,700m temperature is actually at some 15 degrees Celsius. 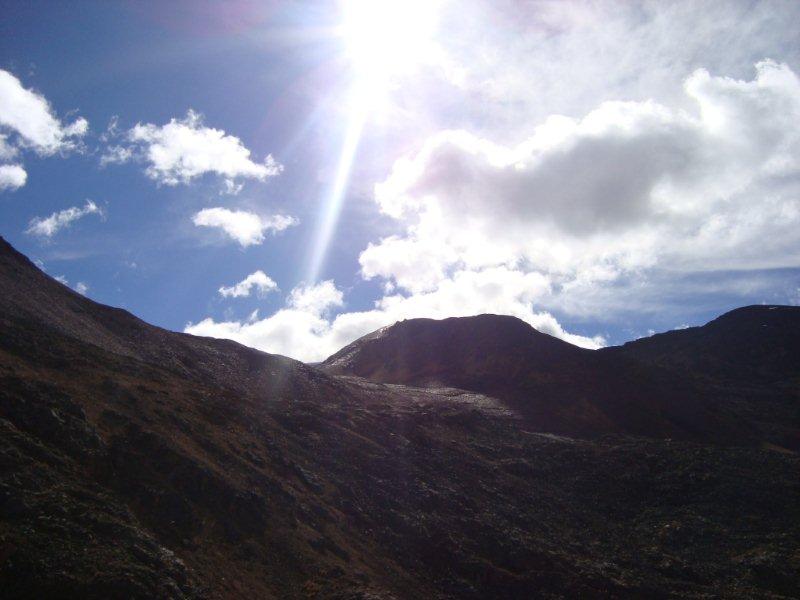 In the backlight the finish with its ski hut shows up for the first time. 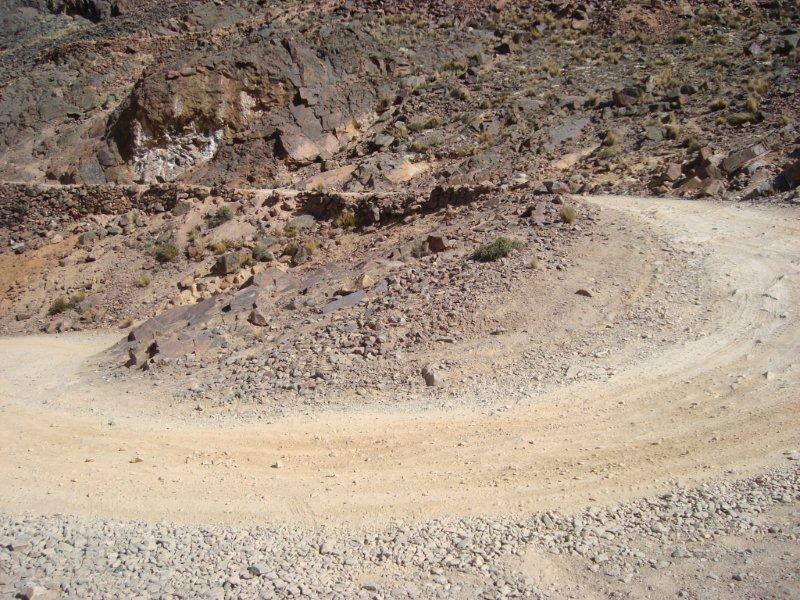 Final ramp to the summit begins at this point. In particular in the switchbacks glossy solid rocks and loose stones hamper the climb. (Actually being a road biker you wonder what all this is for...). 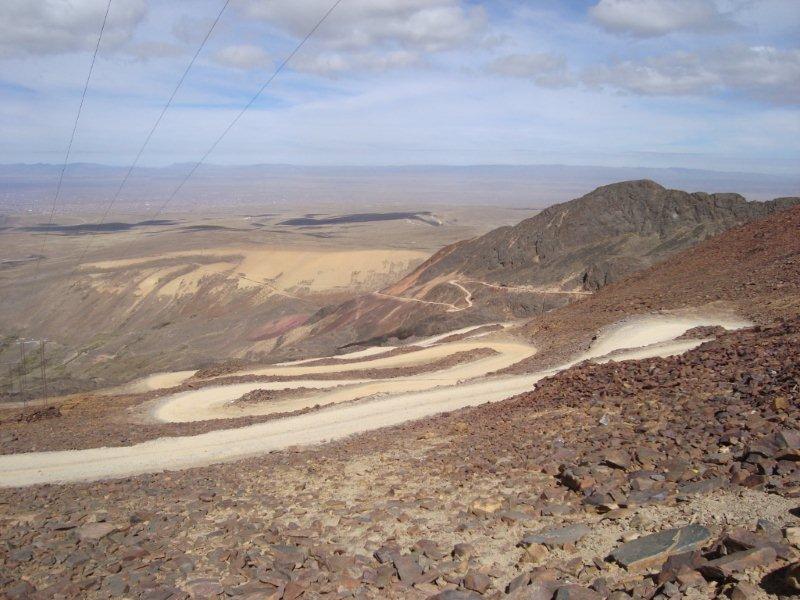 At 5,000 meters you have this view on the recent serpentines of the way. After ten days having steadily been at an altitude of above 3,500 meters red blood cells are actually celebrating a big party: haematocrit und haemoglobin parameters being at their peaks! Oxygen partial pressure at this elevation does only amount to half of that on sea level. Despite the rather short distance to the summit my bike computer reports the lowest average speed ever measured on an uphill ride: less than 5 kilometers per hour...

In the foreground first snow fields and in the back a scientific site. Suddenly a yapping and snarling dog attacs me. However, the support car blows its horn and the mutt fortunately vanishes.... 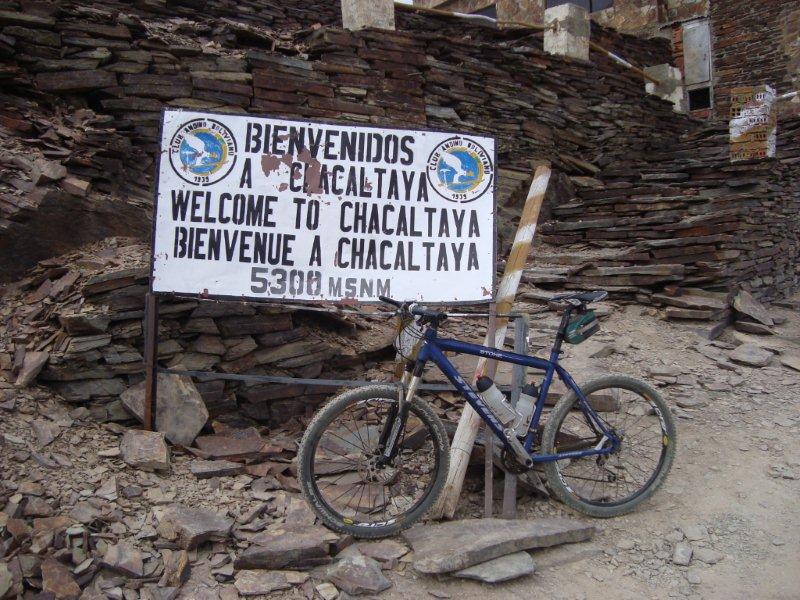 Bienvenidos a Chacaltaya! Official altitude is 5,300 meters above sea level. My barometric altimeter reports 5,174m and Google Maps/Earth confirms at this point a shade more than 5,200 meters. 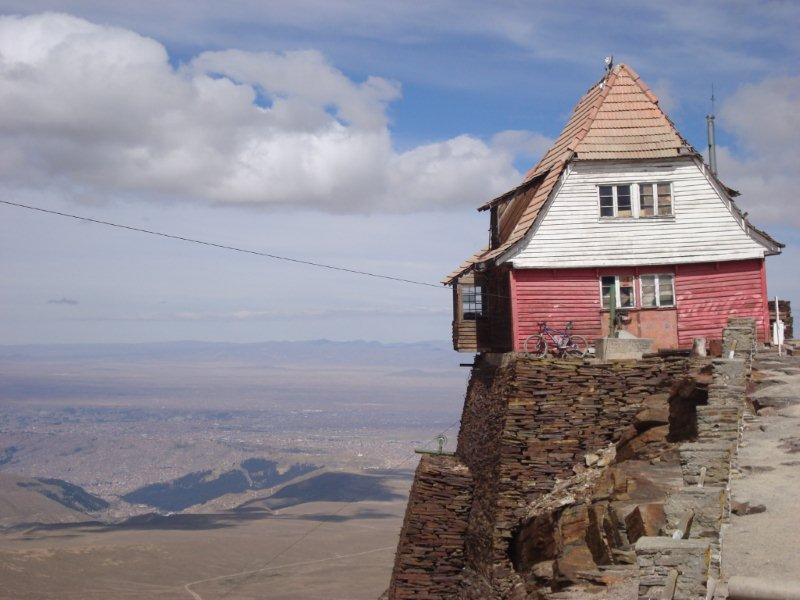 In the low background of the wobbly hut you can identify the town of El Alto and even lower in the basin the town of La Paz: Both towns with a total population of some two million.. 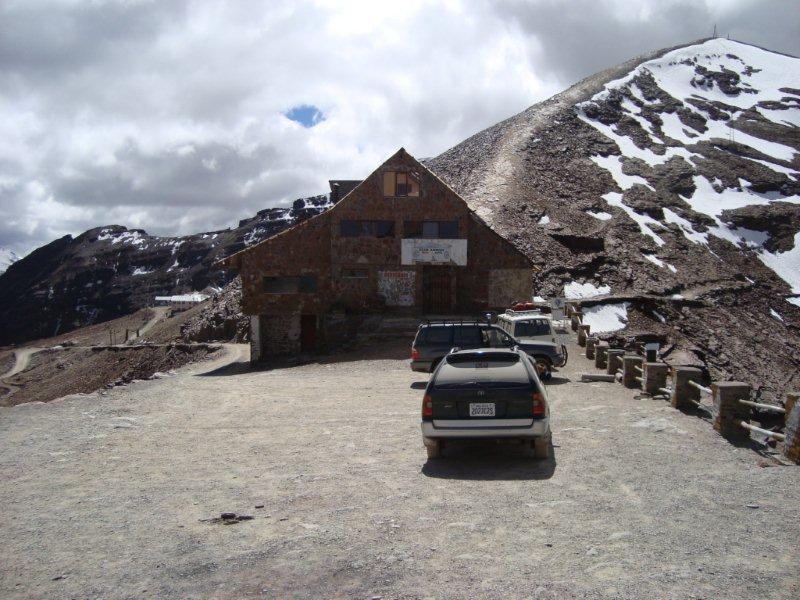 Directly behind the other lodge the trail to the summit begins. On the right side you can hardly divine the former ski area with its ski lift.