The original idea was to climb Tehran's local mountain Touchal reaching almost 4,000m. However, the expected cyclable runway turned out to be an unrideable steep mule trail or stoned hiking path. Thus, the ride was finished after some 400 meters of altitude gain and we returned empty-handed back to the village and started a descent ride down to Tehran suburbs.

Start of the climb was in the small pilgrim spot of Emamzadeh Davod at an elevation of some 2,570m. The profile shows the initial altitude gain of some 400 meters and the following return to the village. Afterwards a short uphill leads up to a small pass and finally the ride descends down to Farahzad and the outskirts of Tehran. 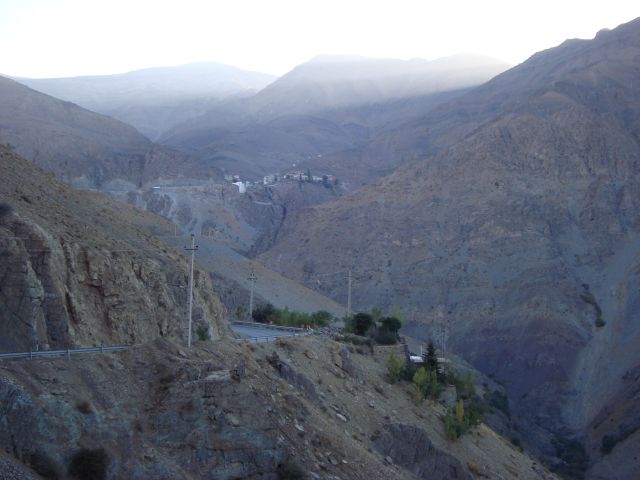 The village of Emamzadeh Davod is located northwest and some 1,000 meters above Tehran. The spot becomes visible in the morning sun.

An asphalted road leads to a parking area right before the village. Emamzadeh Davod is a Shiitic pilgrim's village attracting thousands of pilgrims from all over Iran. 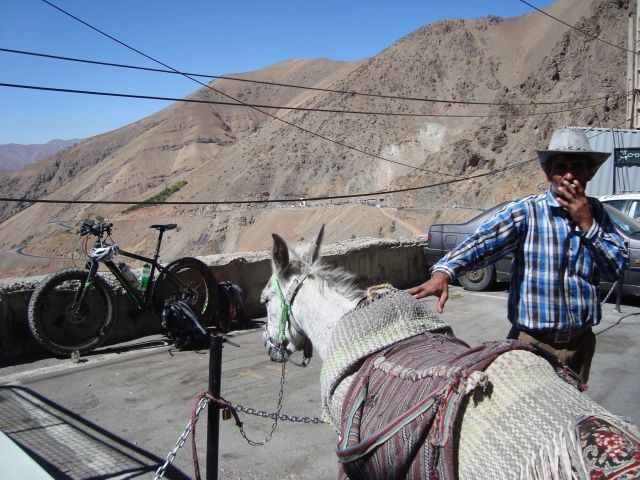 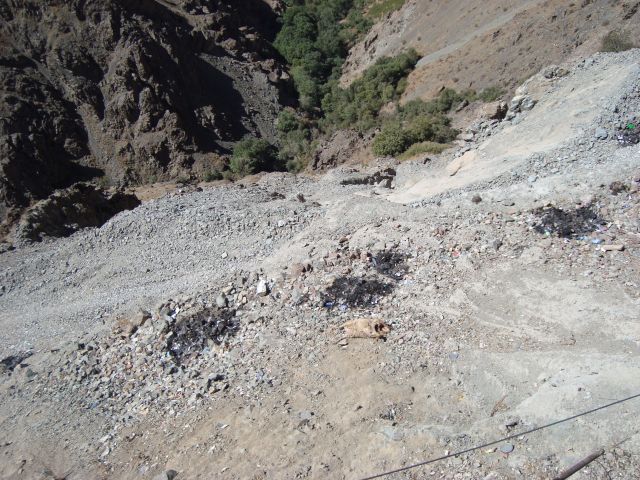 View down the wall shows a freshly slaughtered sheep... 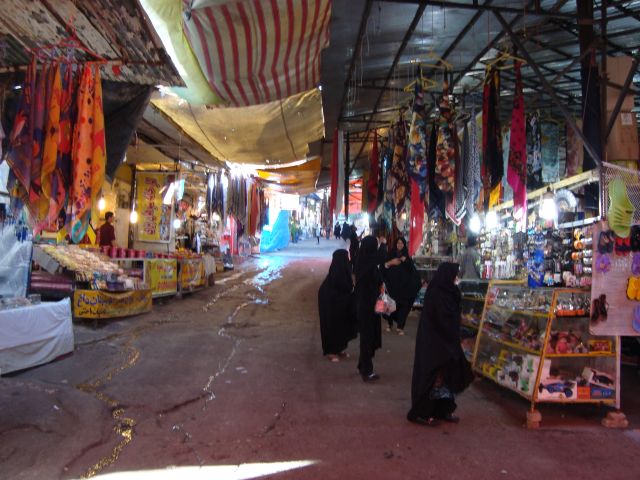 The way winds through a small bazar in the early morning. 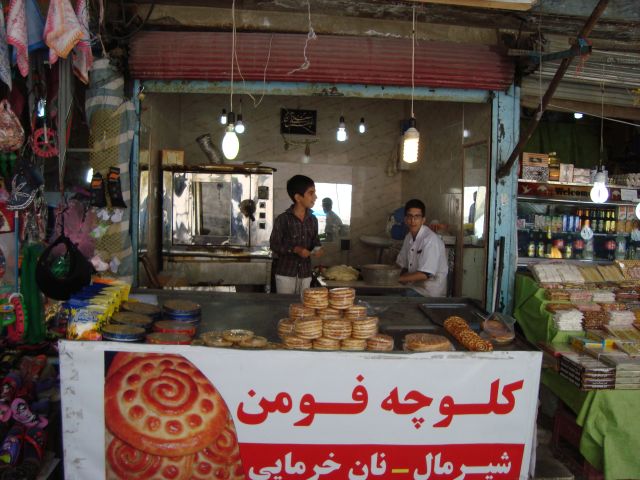 Local candy and sweets on the bazar

Mortal remains of a relative of a Muhammad successor are said to be preserved in this holy shrine. 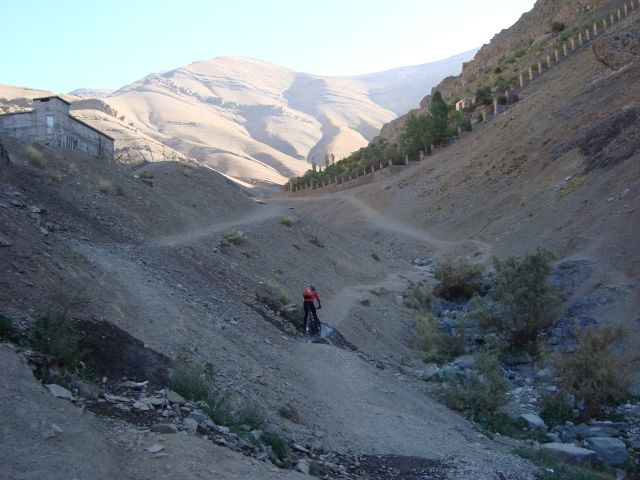 This small way begins directly behind the bazar. The image shows my Iranian bike guide. 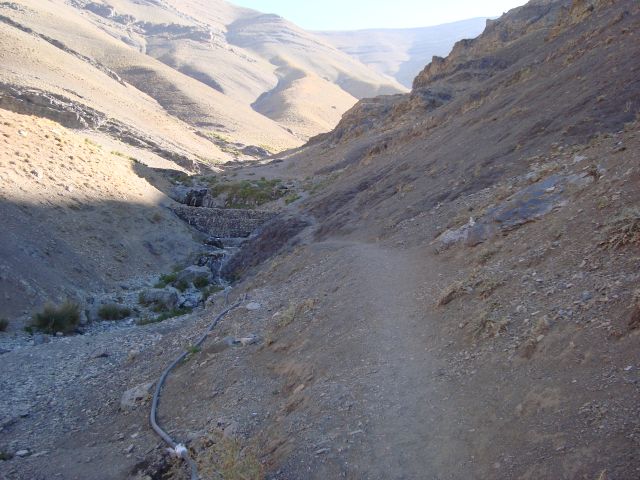 The way is in this lower part still cyclable but has some steep pushing passages. However, I expected a broader runway as indicated by Google Maps.

Unfortunately, it becomes even more technical, sandy and sideward sloping.

Carrying the bike instead of riding...

My fat tyred bike is much to heavy to carry it all the time and my shoe equipment and clipless pedals are totaly inappropriate for this way. Anyhow, my bike guide stays calm and gentle (Iranians are always kind and gentle!) and points out that we only have to push and carry our bikes for some more 500 meters of altitude gain. Being no longer interested in this hiking adventure we stop the climb at an altiutde of some 3.000 meters and return back to the starting point. 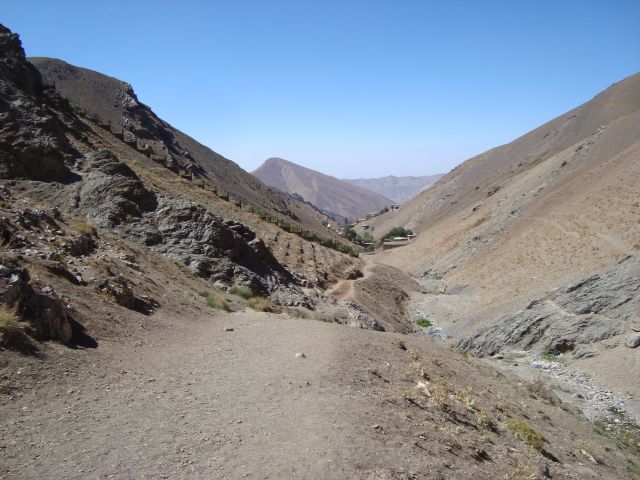 Way back to the village 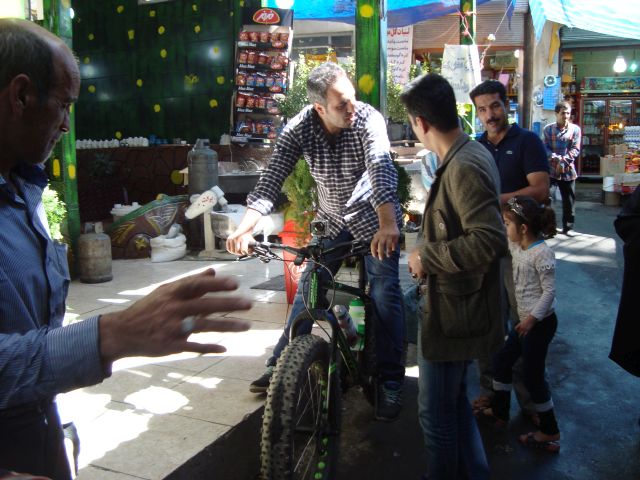 Crossing the bazar for several times me and my bike involuntary become an attraction and many friendly locals ask for pictures or a test seating on my bike. 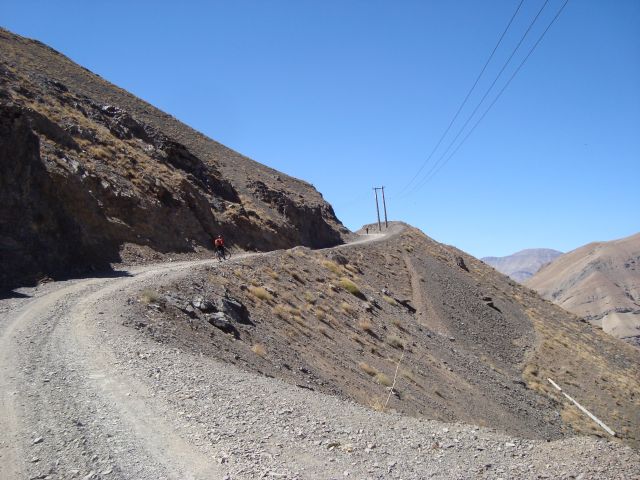 Behind the village at last a broad runway corresponding with my original expectations. The scenery becomes much more quiet and you can pedal up a short ascent.

Splendid view down to opposite asphalted road up to the pilgrim's village. 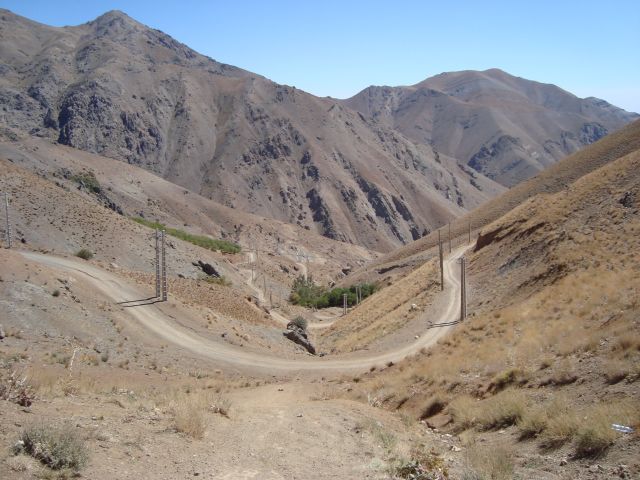 After pass summit at an altitude of some 2,700m the way proceeds on a stony runway down to Tehran direction. 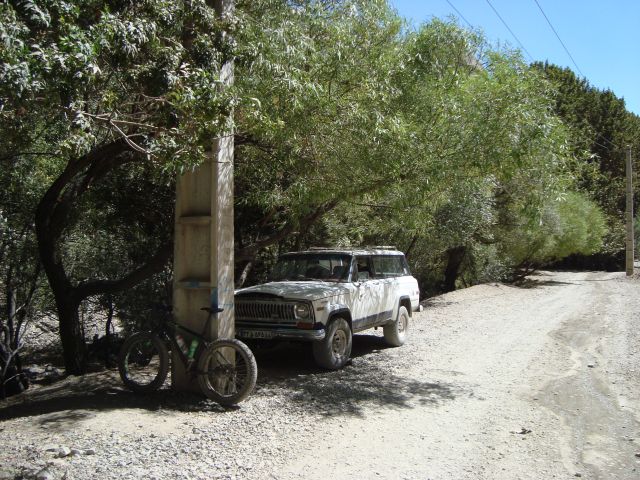 Shortly ahead the village of Farahzad our support car is finally awaiting us.