Wurmberg and Brocken in The Harz forest can easily be combinded in a pleasant road bike tour from Braunlage. Thus, you can reach two German federal state peaks - provided you find the right way to Wurmberg mountain. Until the end of the 1980's Germany and Europe were actually divided between these two mountains. 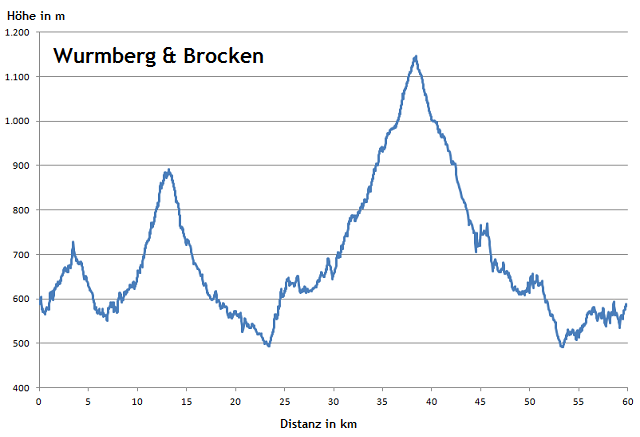 Profile from Braunlage. The first kilometers show the attempt to find the correct way to Wurmberg mountain. After some 23 kilometers the climb to Brocken mountain starts in the village of Elend. Finally, the descend ride leads back to Braunlage. 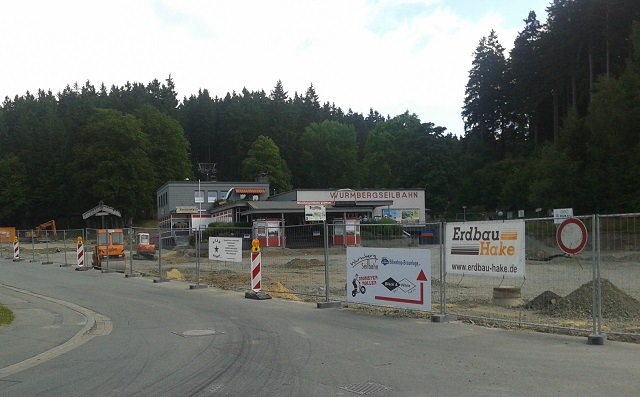 This is the valley station of Wurmberg cable way. But where is the supposed asphalted way to Wurmberg from the West? There is no sign indicating the right way and Google Maps reports several ways up to the mountain... 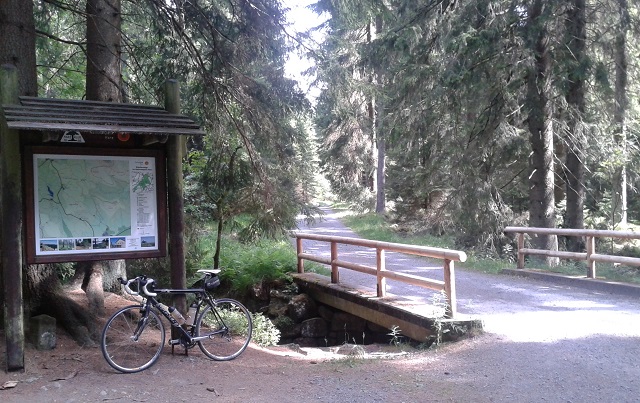 This is obviously the wrong way.. 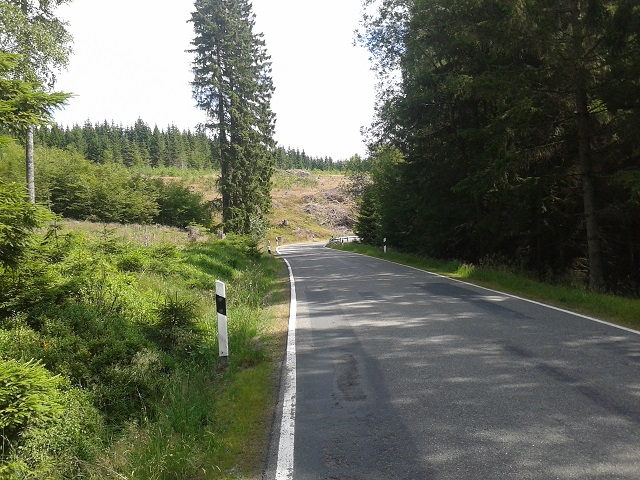 Next try from the East. This way leads to a parking area "Kaffeehorst". The road is asphalted and seems to be the correct one... 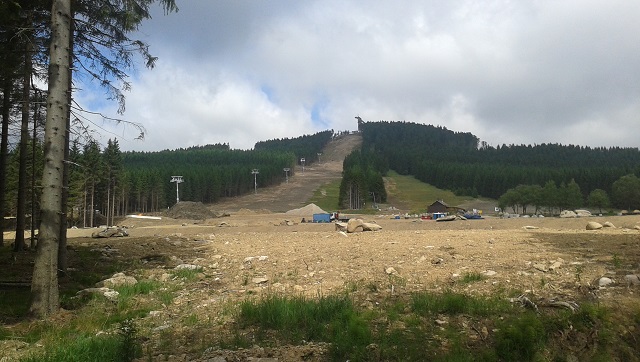 After a short climb this is the view to the new ski area at Wurmberg mountain. At the very top you can see the ski jump facility on the summit. 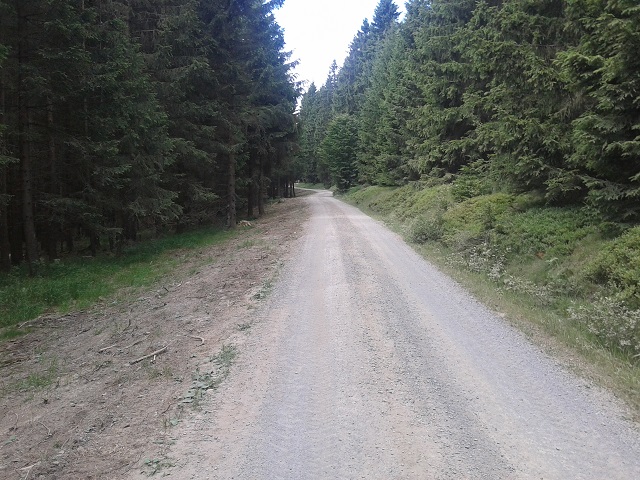 After the parking area it becomes clear that this is, again, the wrong way. Anyhow, the ride continues now on a graveled forest way. It even works an a road bike. 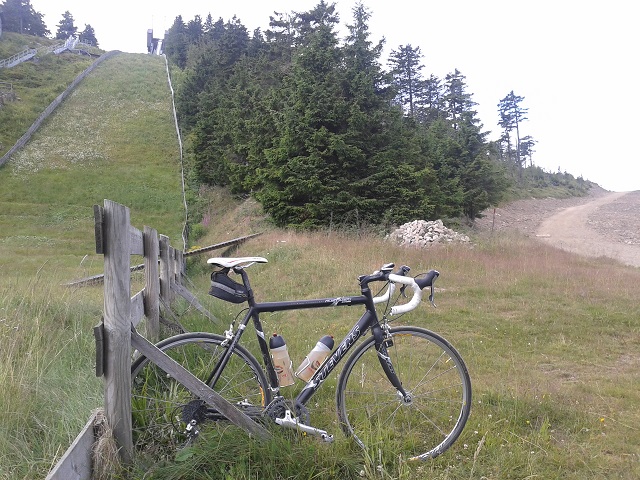 At an elevation of some 890 meters you have finally reached the bottom ground of the ski jump. The way to the right is actually not cyclable on a road bike but could have easily be done on mountainbike. (The right way would have been the only 300m long "Kegelbahnweg" in Braunlage with an asphalted road to the peak starting right at the end of that way.) 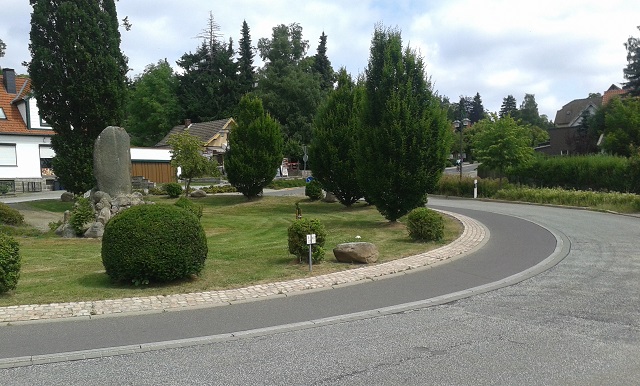 However, after the odyssey at Wurmberg a very convenient tour to Brocken mountain starts in Elend. At this traffic circle the 15 kilometers climb starts at an altitude of only 500m. 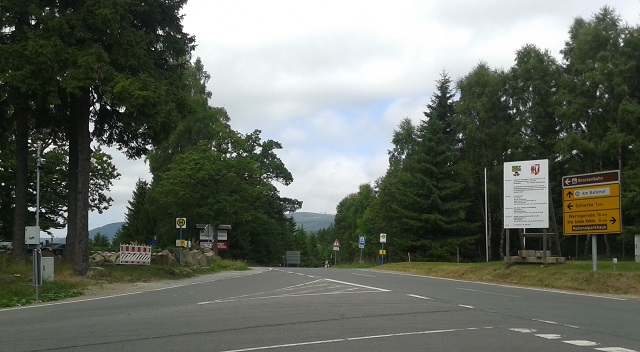 Junction to Schierke. In the very back the summit of Brocken mountain becomes visible. 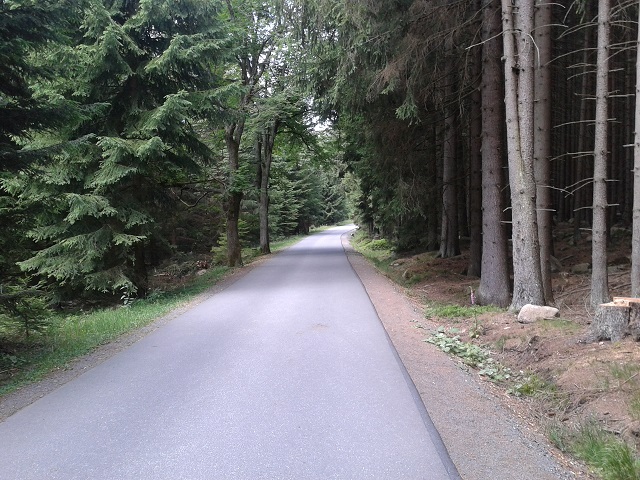 Stay to the right in Schierke village and you directly get to the Brocken road which is closed to motorized traffic. The road has newly been asphalted only few years ago and thus now provides great fun for road bikers. (In the past the road conditions were significantly worse / see below) 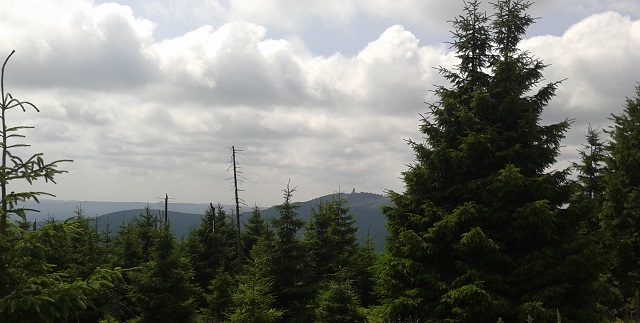 Wurmberg ski jump in the very back. 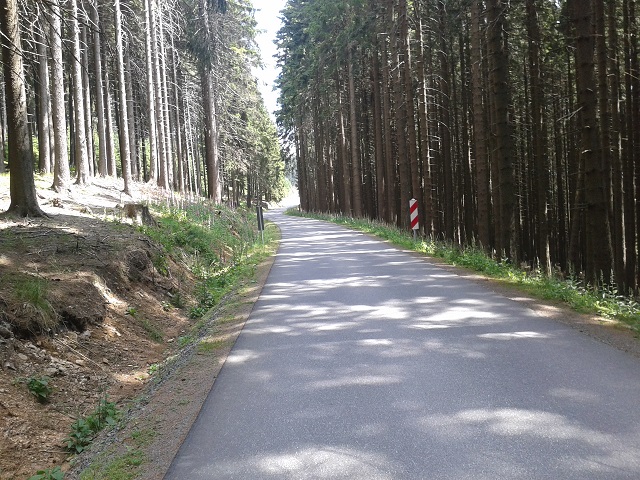 Great road with an average gradient of 6%. 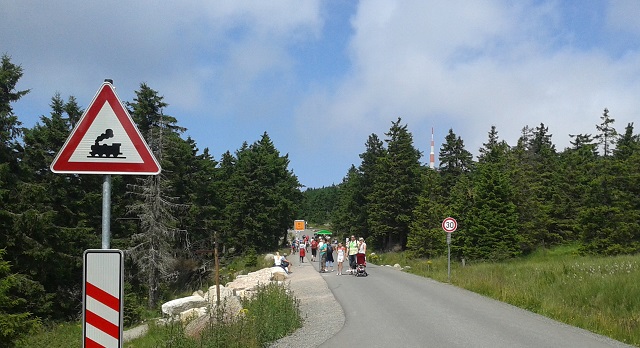 On the final kilometer to the summit the road becomes crowed as several hiking paths converge right here. 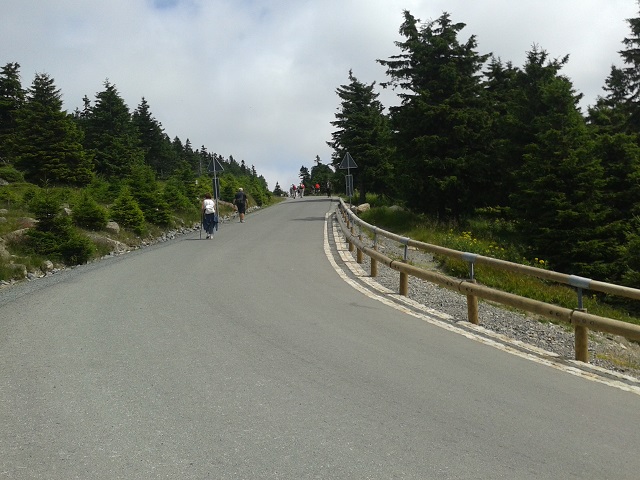 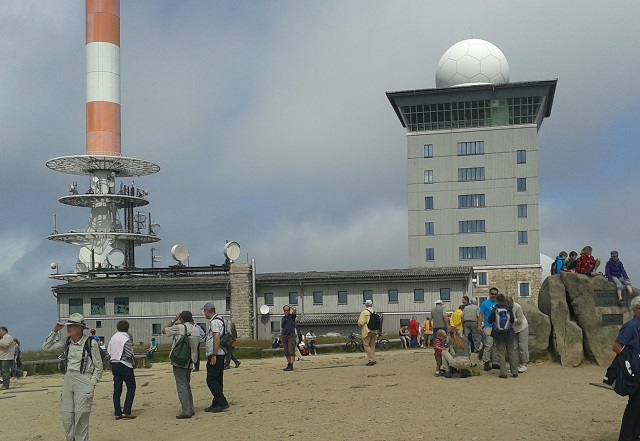 Telecommunication facilities on the summit. 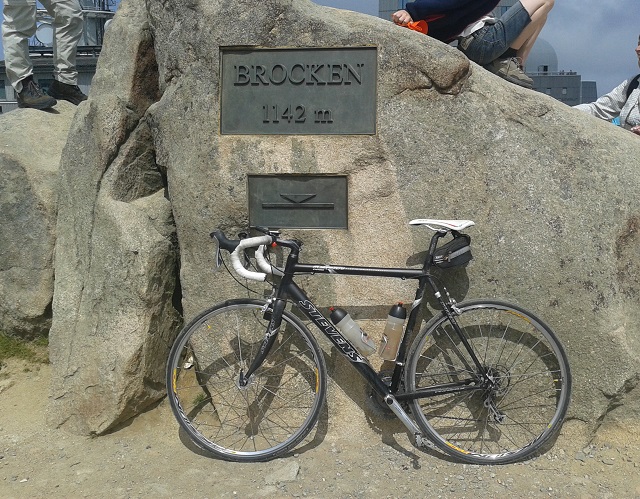 Far and wide the only mountain like in Northern Germany - so to speak the local mountain of Hamburg. However, the traffic-free pass road from Schierke shows catastrophic conditions after the winter impeding any pleasure mainly on the downhill ride. Moreover you have to share the last kilometer to the summit with hundreds of hikers as obviously all hiking paths to the summit are channelised here. However, a nice trip for season-kickoff! 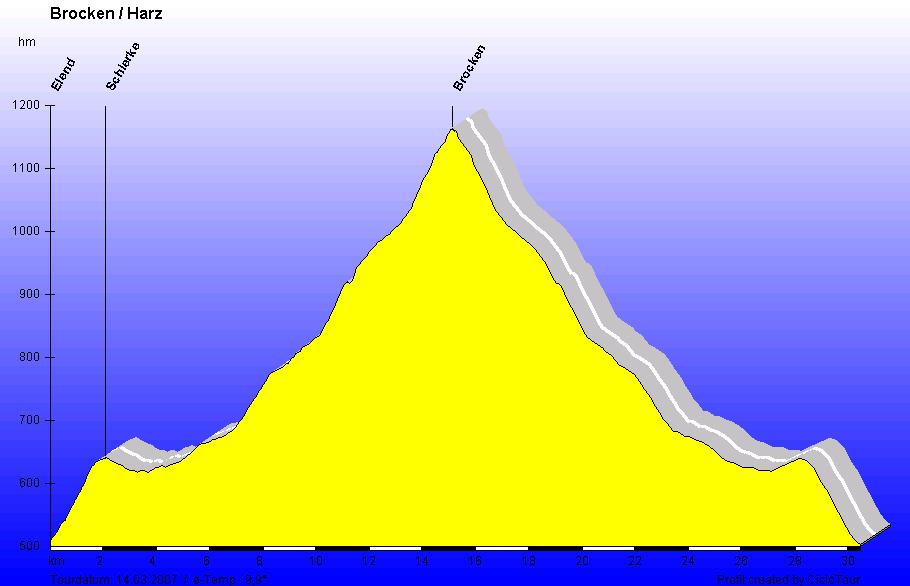 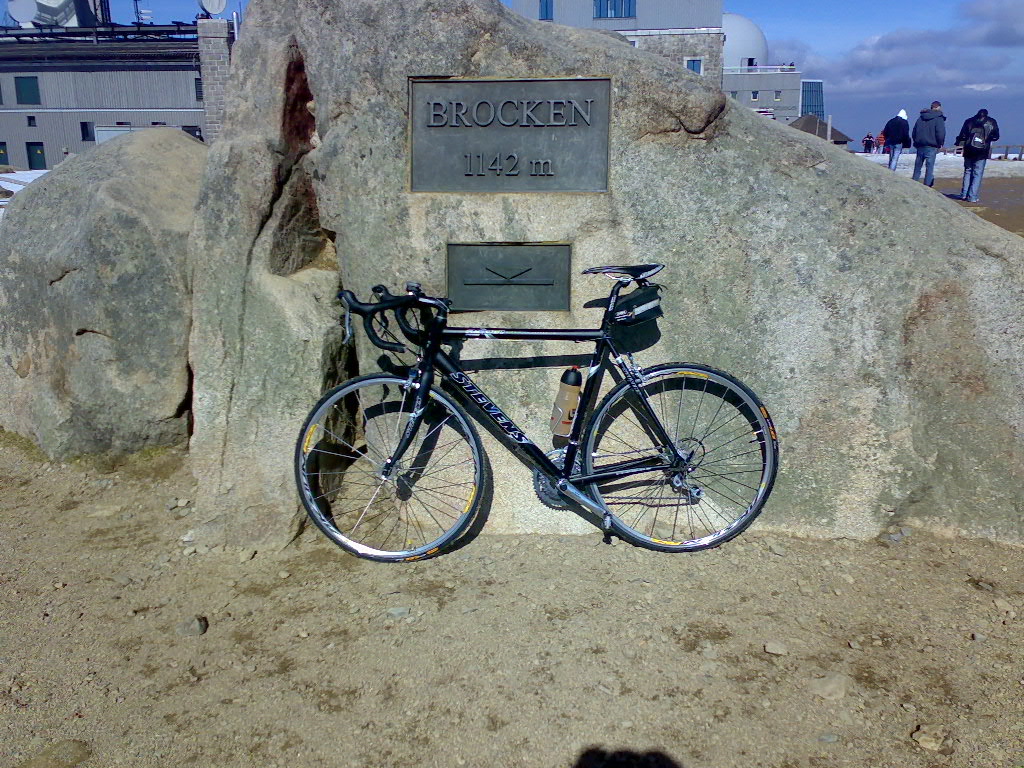