In the Troodos Mountains of Cyprus, on the highest point of the island, there is a British radar site for air surveillance of the eastern Mediterranean. As is usual with such installations, there is also an asphalted road leading up to it, which can be climbed on a racing bike to the fence there. In spring or autumn, when temperatures are relatively bearable, you can tackle the climb up to an altitude of almost 2,000m. 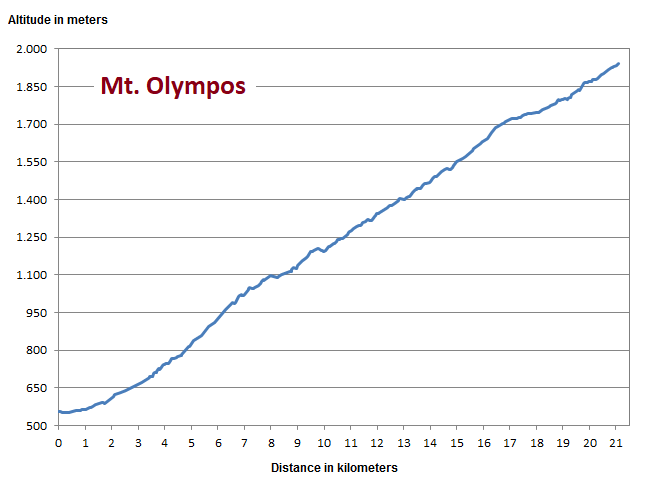 The profile with its average of 6.5% is easy to climb. 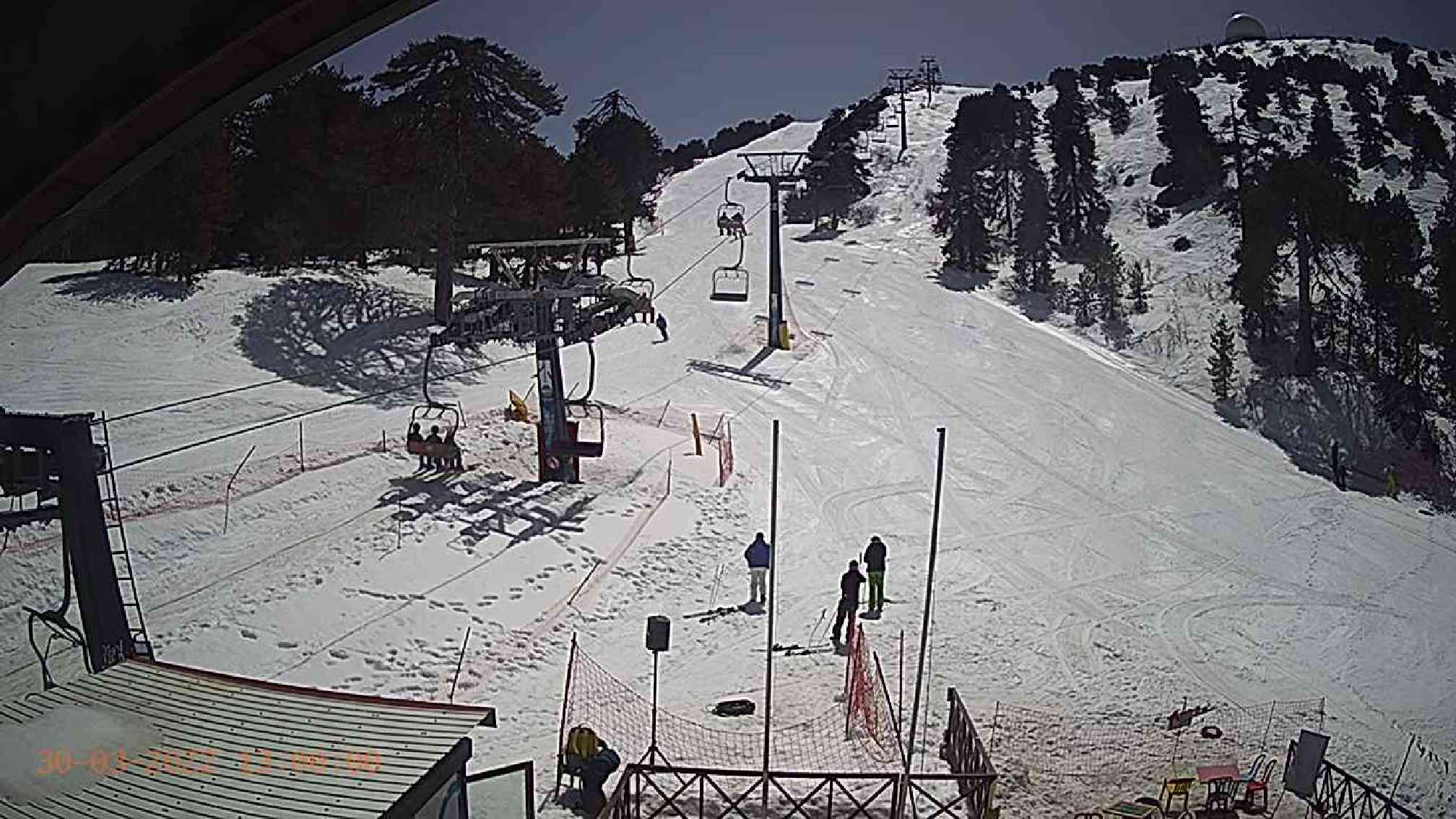 An unusual amount of snow at the end of March 2022 ensures that the ski lifts at Mt. Olympos are still open. The picture of the north slope comes from a webcam just one day before my visit. At the top right, the dome of the radar station can be seen on the summit, which, however, is approached from the south side (hopefully free of snow today). 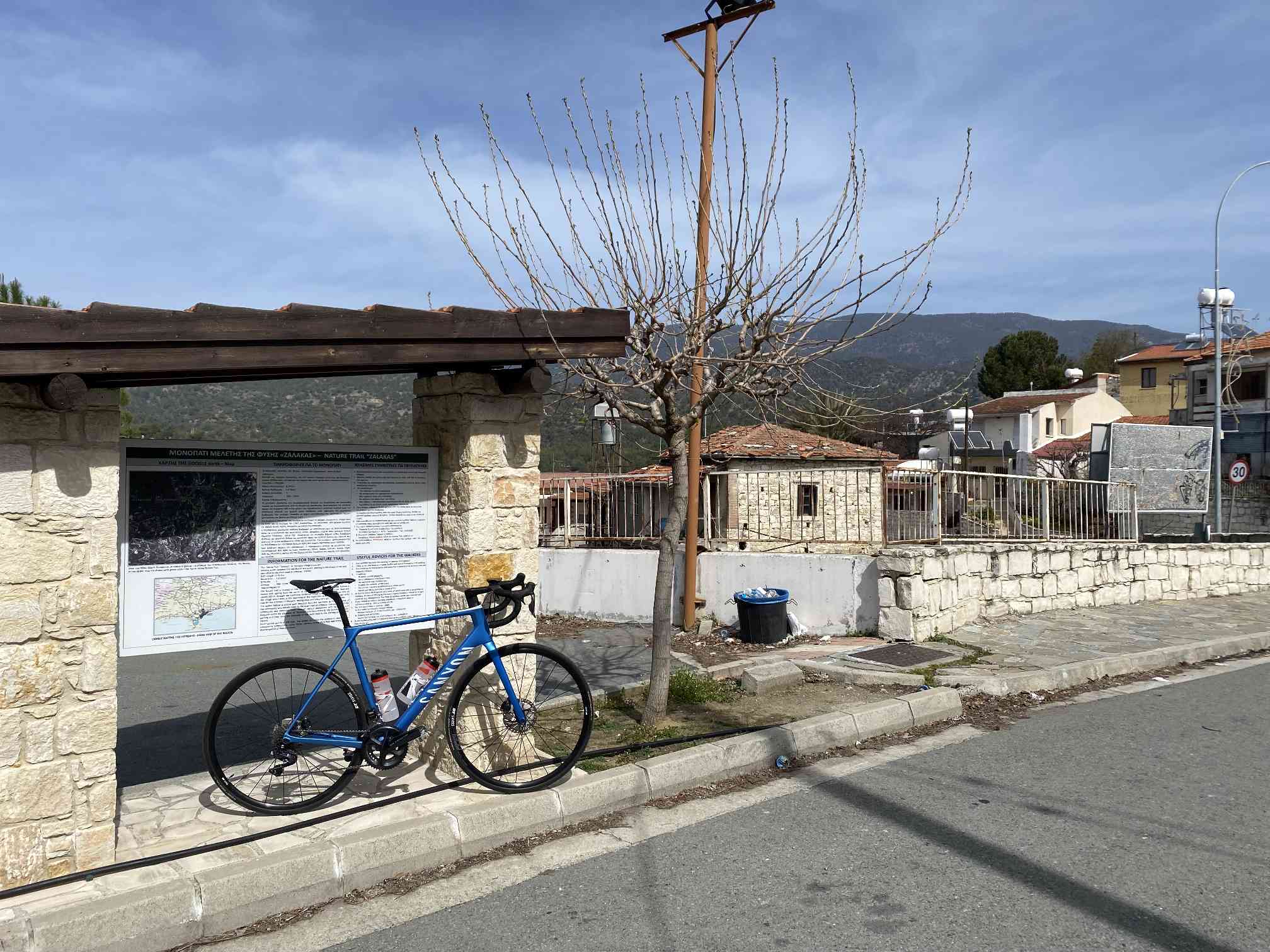 Start in the small village of Trimiklini on the edge of the Troodos Mountains. Behind the village, the actual climb to Olympos begins. Alternatively, you could start on the coast, but then you would have to climb about 600 metres in altitude over a distance of at least 30 kilometres. (But be sure not to use the B8 motorway with its construction traffic).

The B8 only becomes passable after Trimiklini. Little traffic, good road surface. And beware: left-hand traffic! 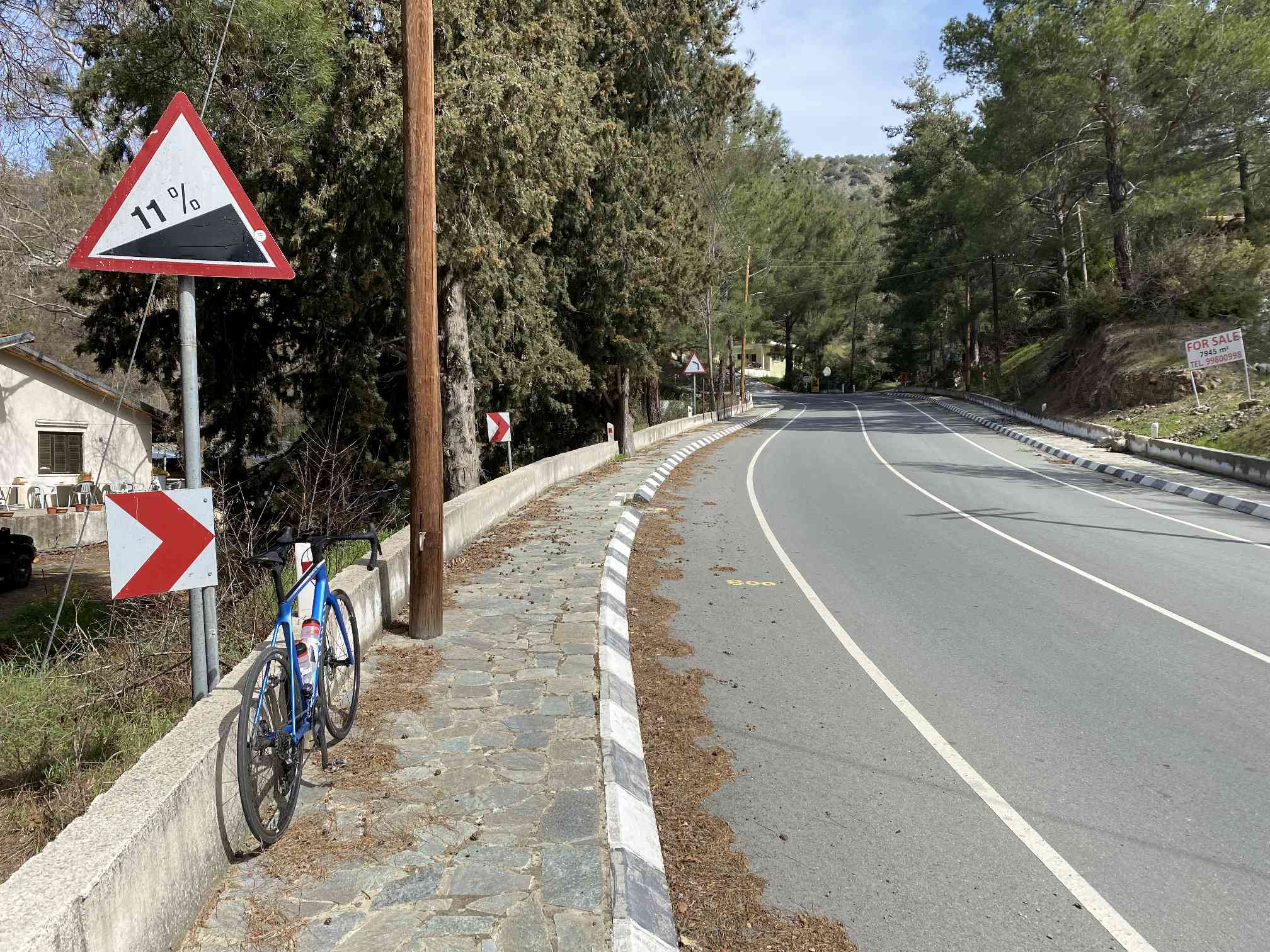 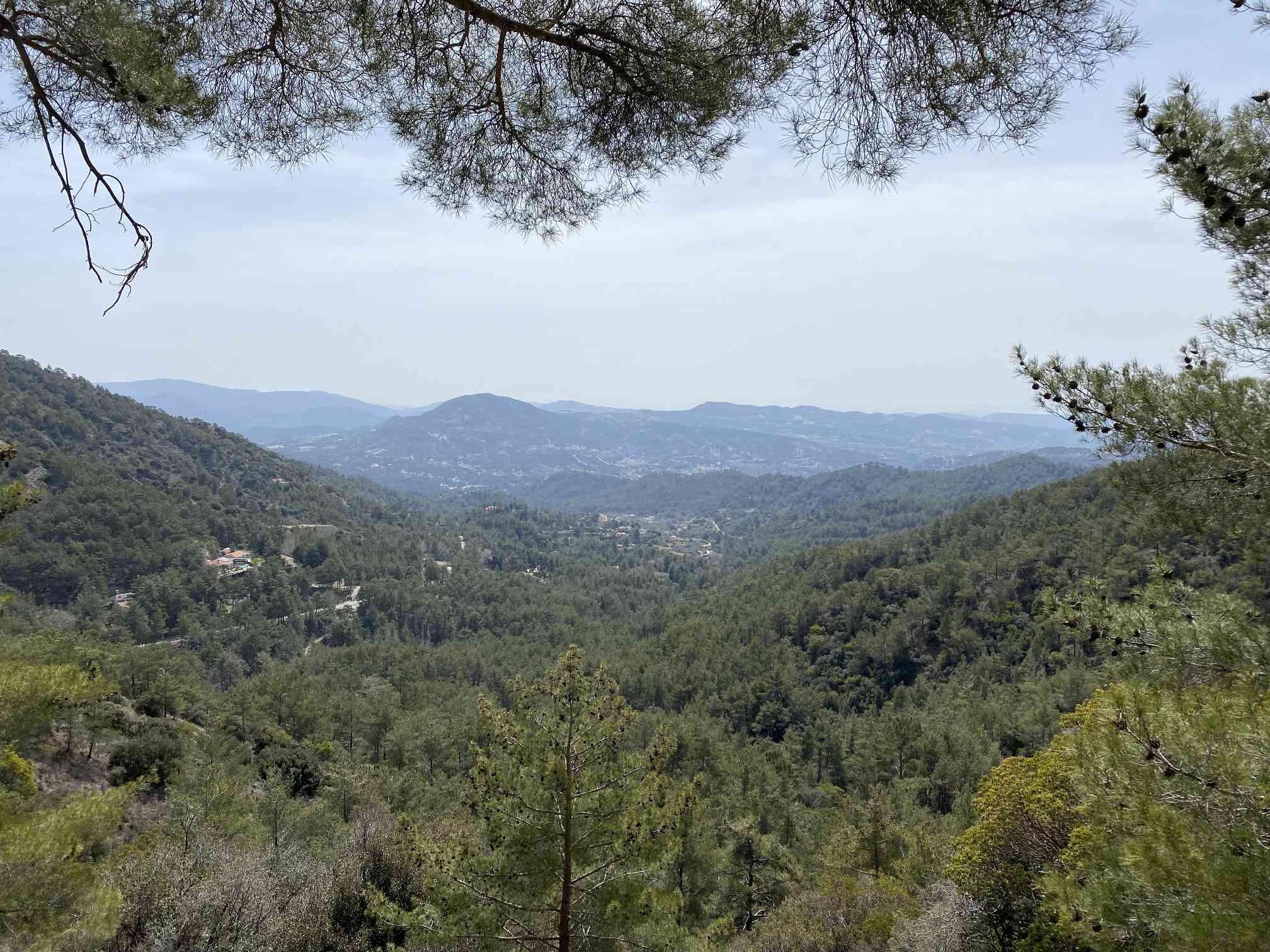 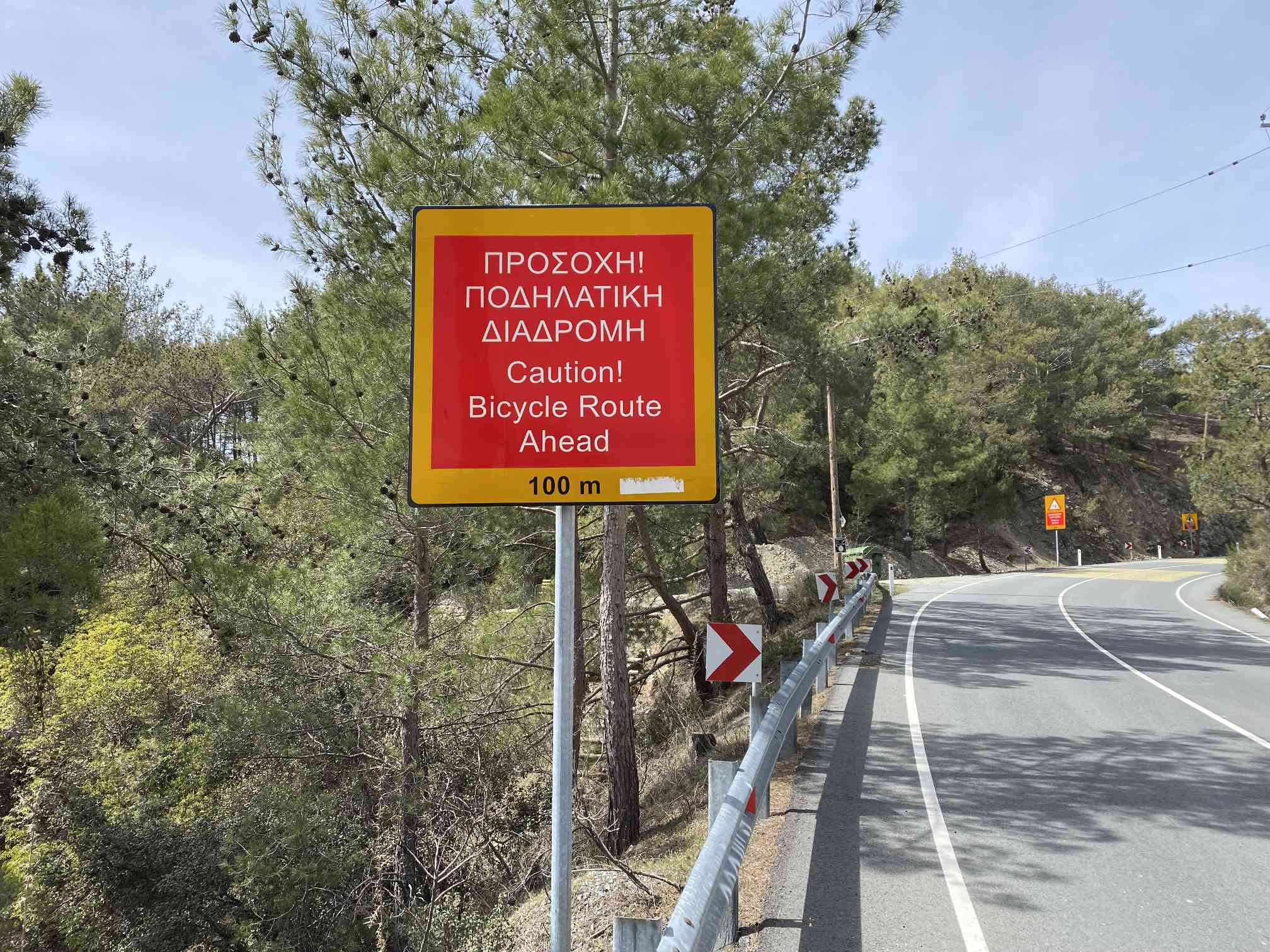 Not only the signposting, but also the weather today shows its friendly side: blue skies at a pleasant 20 degrees and hardly any wind. 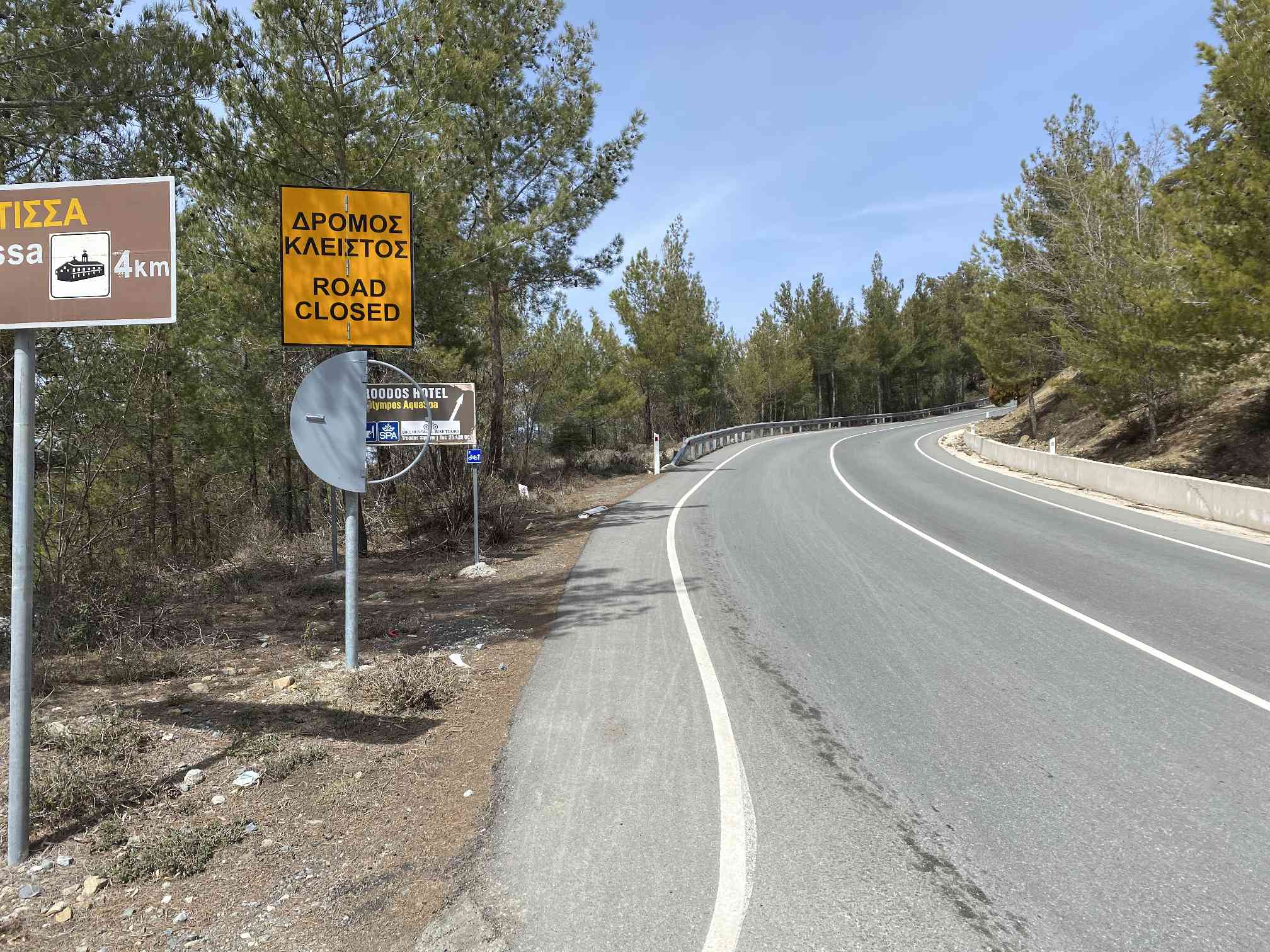 Behind Pano Platres, we are amazed by this sign: "Road closed". Hopefully, they don't still have a snow barrier! 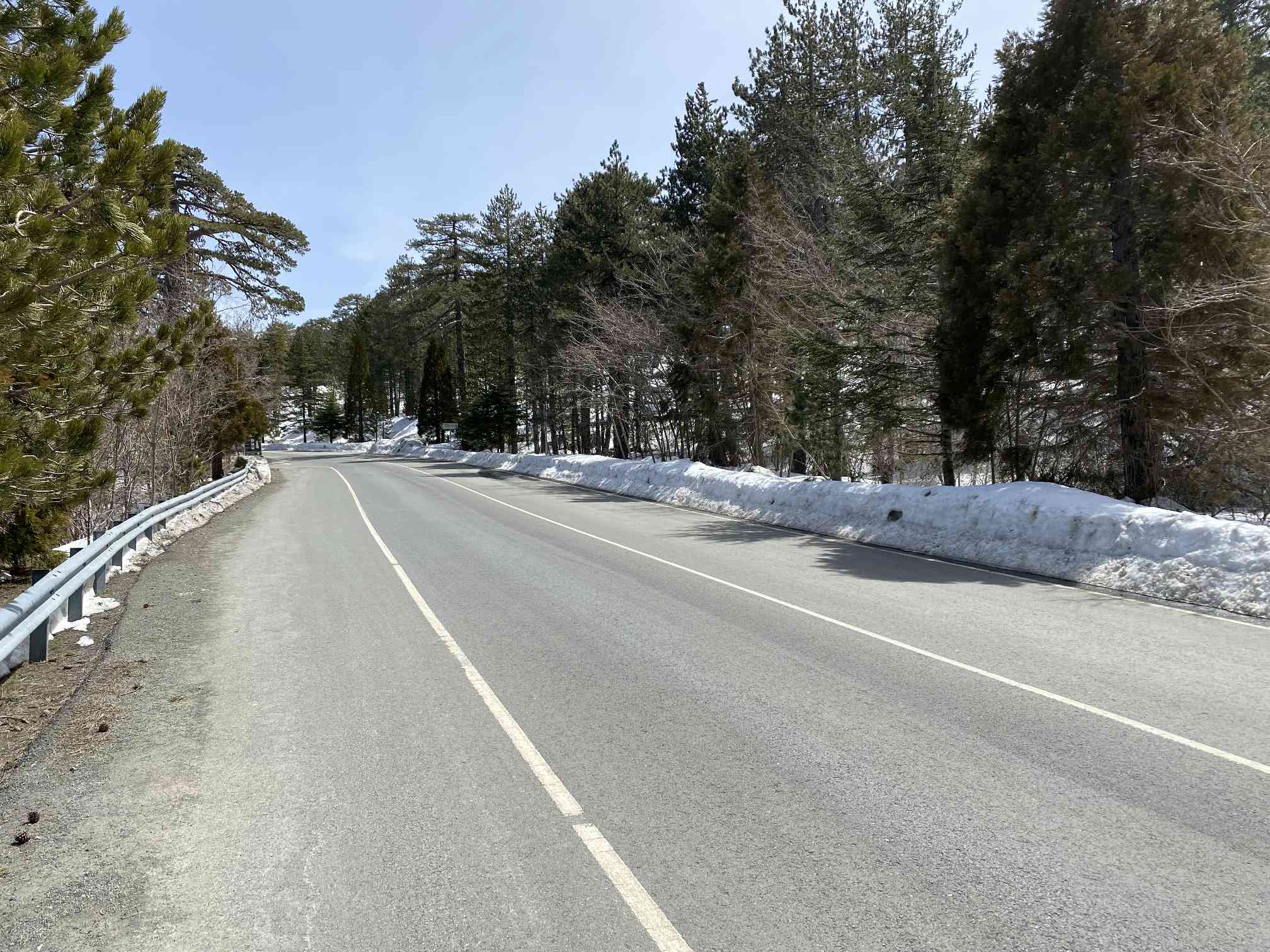 In fact, at an altitude of about 1,500m, there are clear remnants of snow on the side of the road. 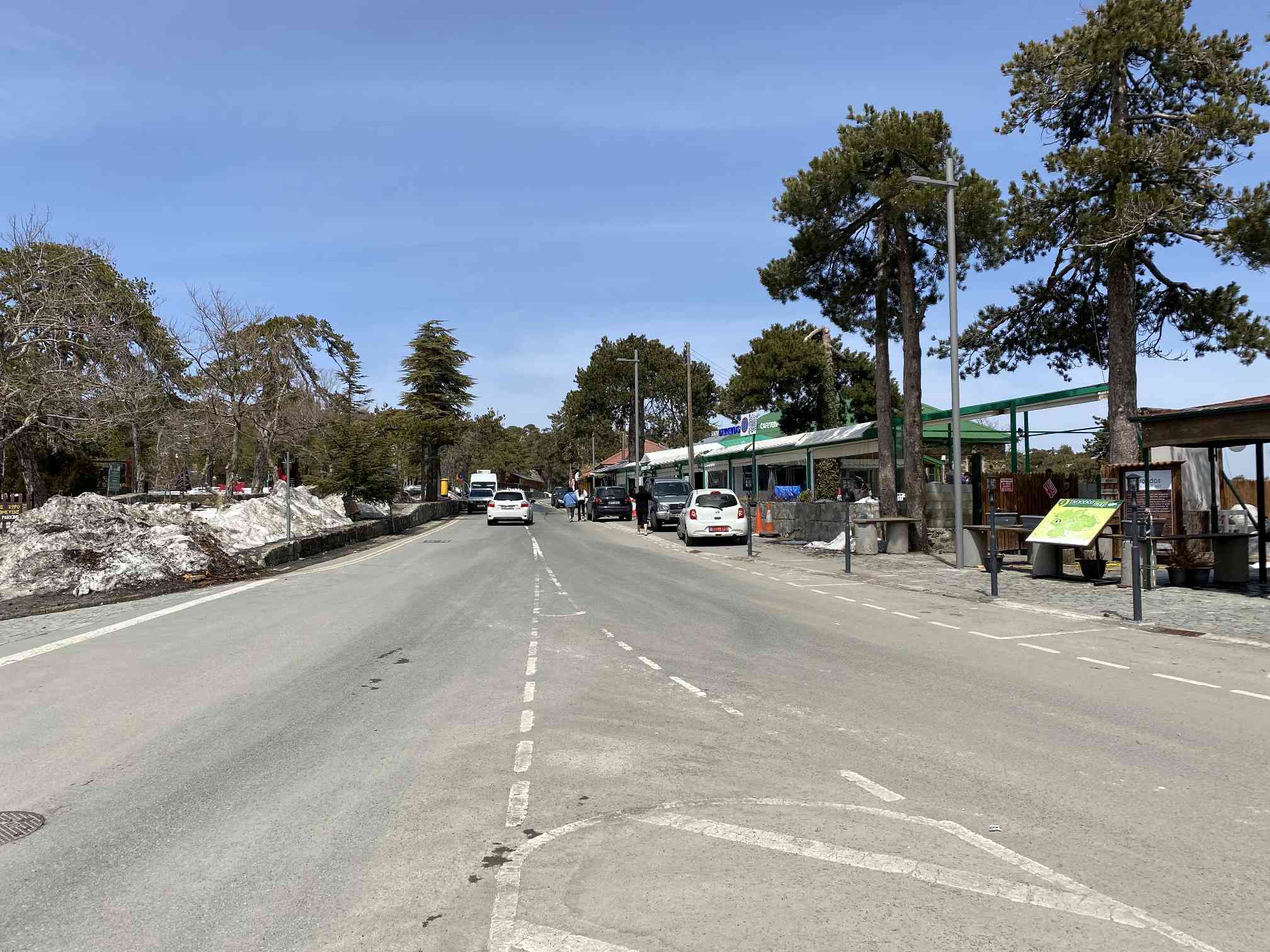 We reach the village of Troodos, which is actually just a rather unattractive string of restaurants and souvenir shops. 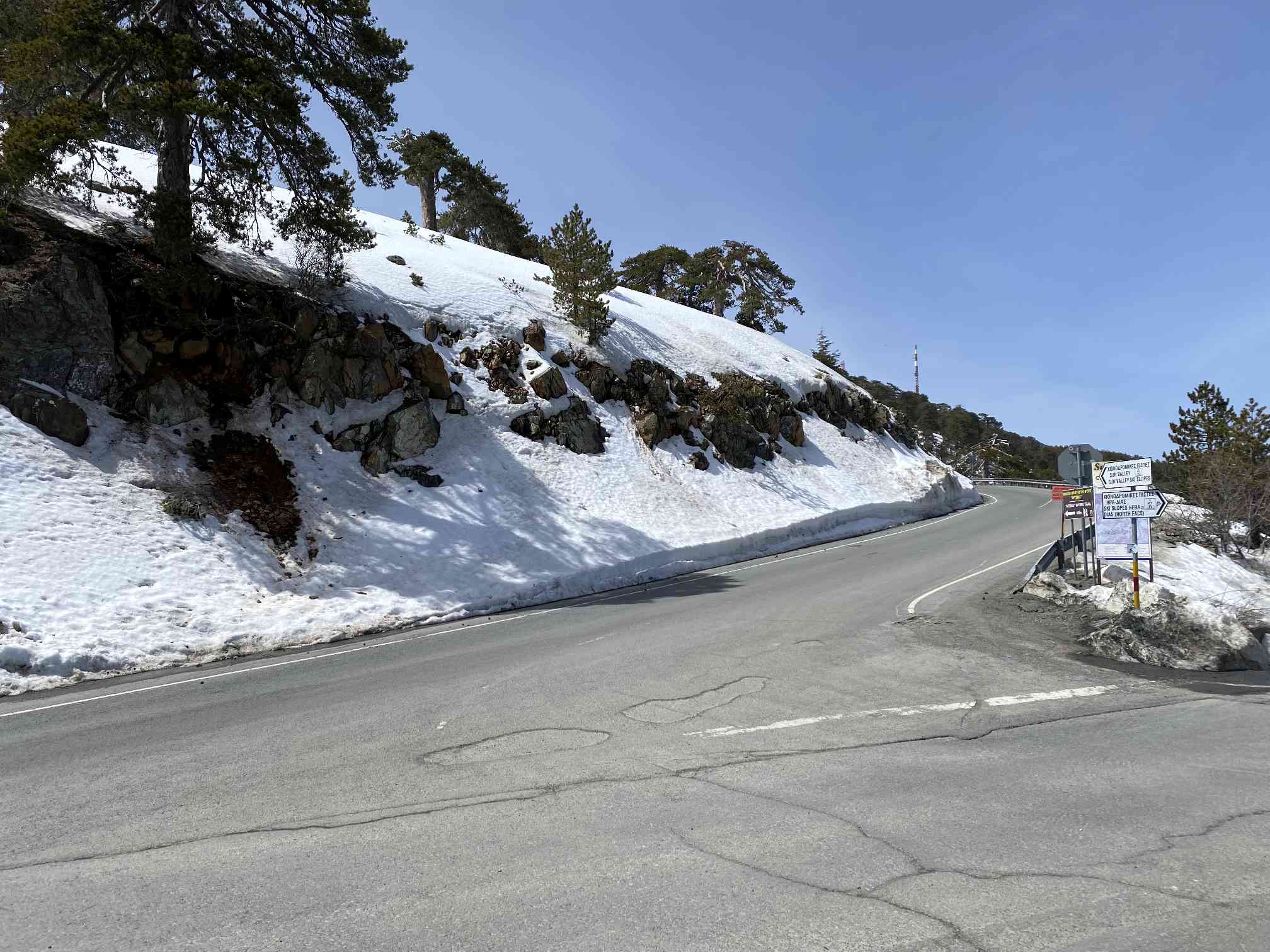 My Di2 is giving me trouble today and won't let me pedal in the lowest gear. The climb is thus more energy-sapping than expected and at this point one is happy about the last turn-off towards the summit. 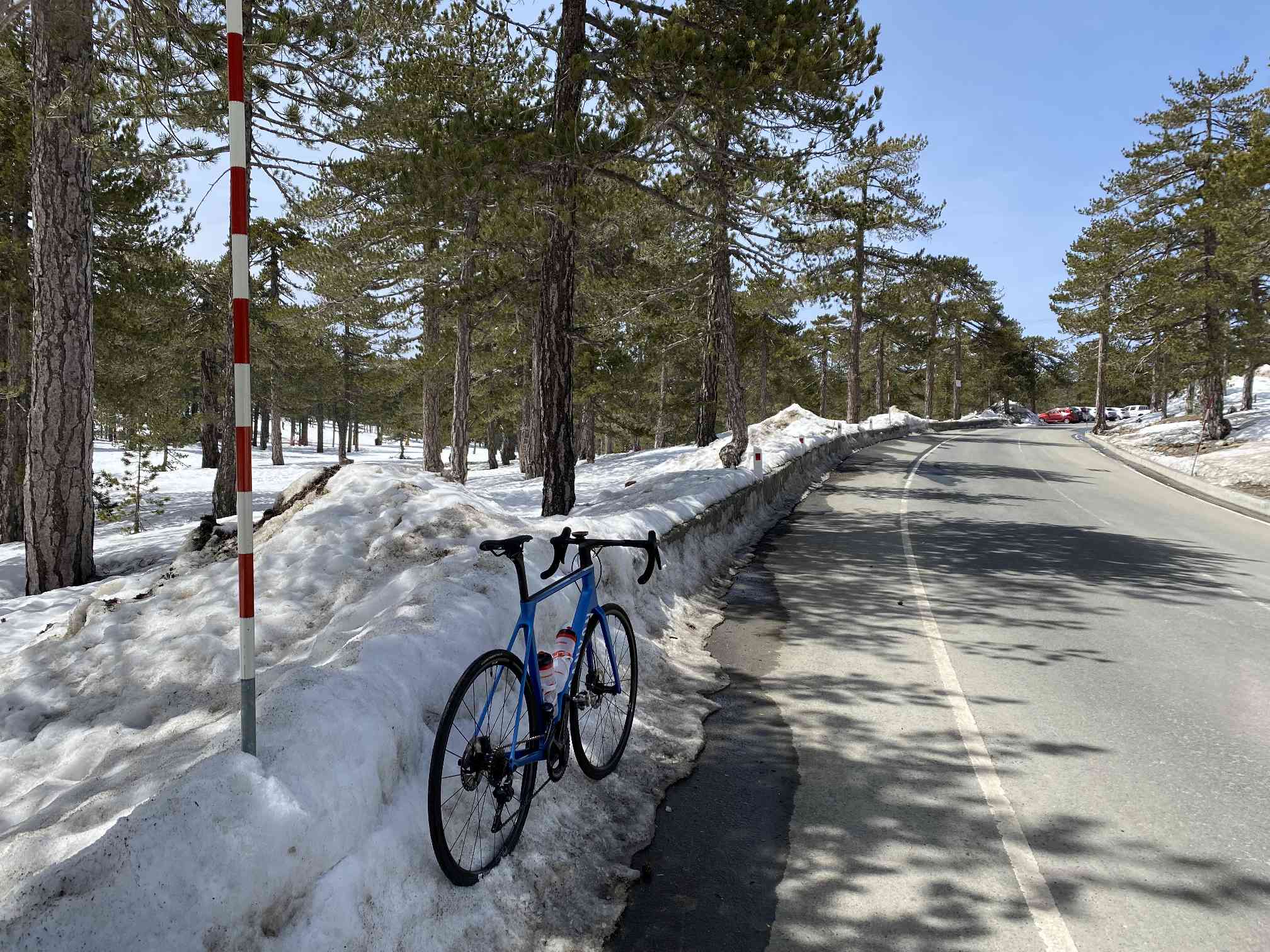 Shortly before the finish, three Austrians easily pass me. They've already done 85km up from the coast. I prefer to take a few snow pictures. The worries about an impassable road were obviously unfounded. 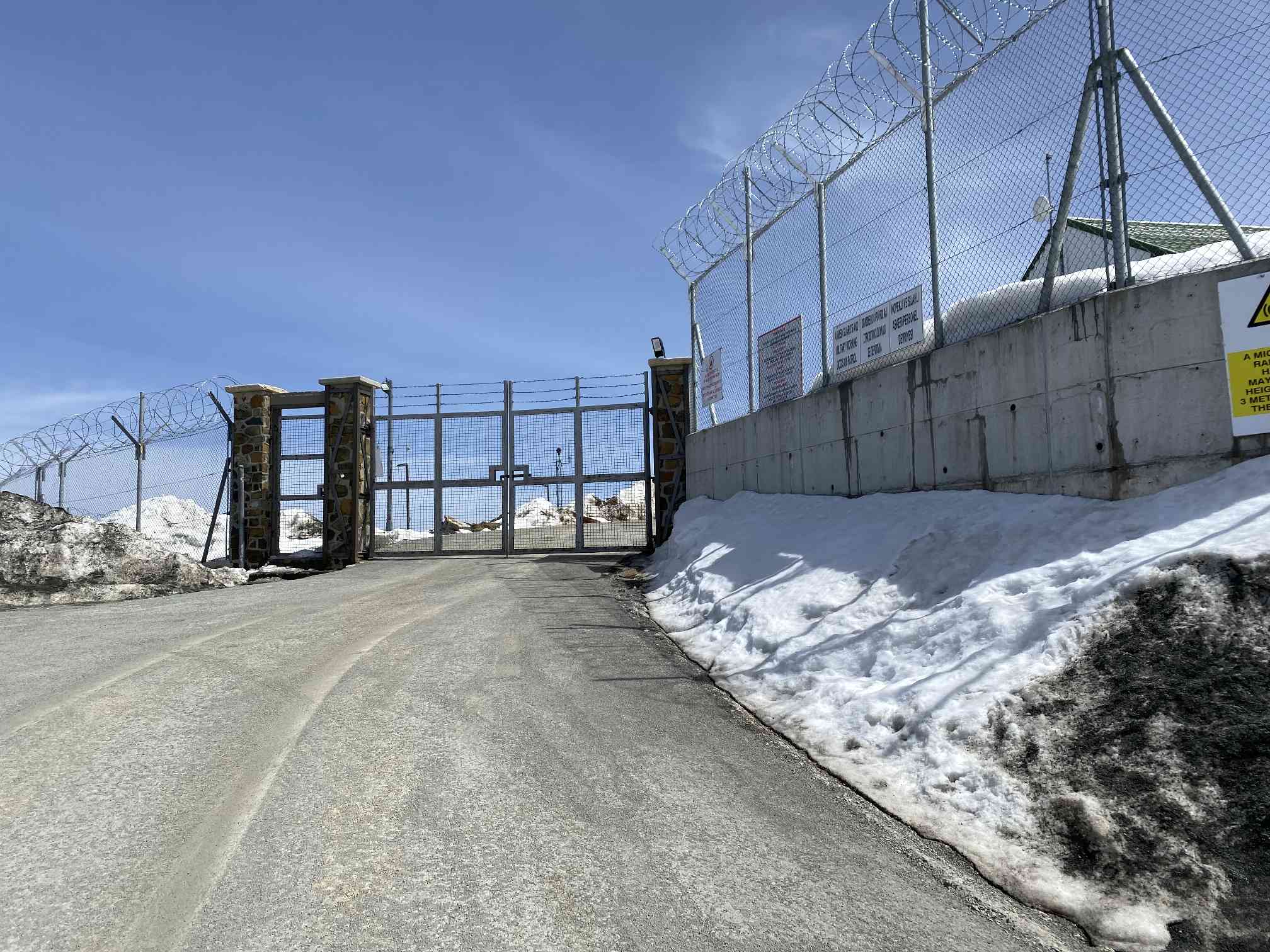 The summit is reached. You get as far as this fence of the British military site. Then it's over. Photography is forbidden.